Who derailed the Arab Spring, the people or elites? 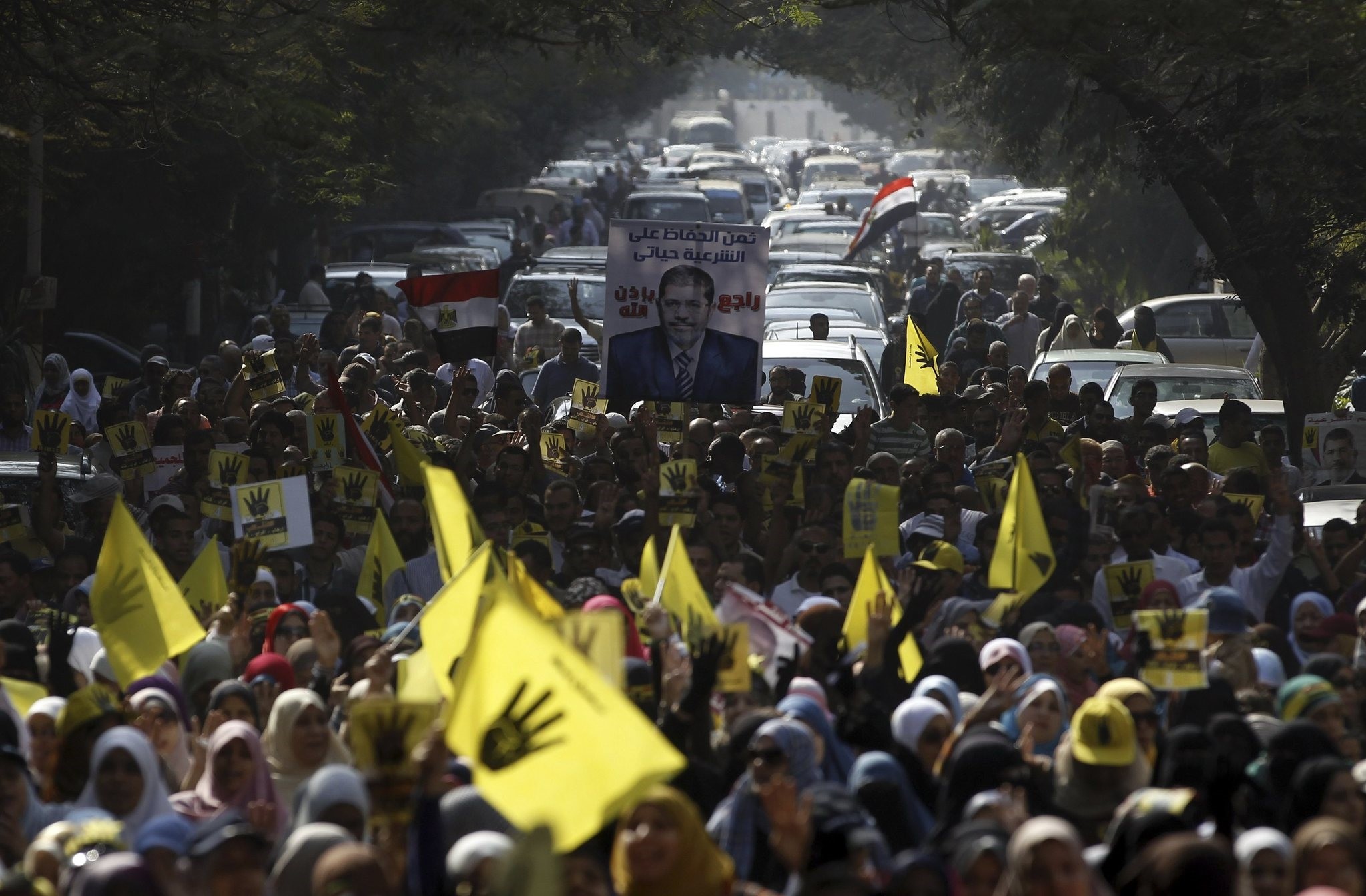 Supporters of the Muslim Brotherhood and ousted Egyptian President Mohammed Morsi take part in a protest during the mass demonstrations for democracy in the Middle East, Cairo, Nov.1, 2013.
by Ali Abo Rezeg
Apr 06, 2018 12:00 am

The young generation of the Arab Spring did what was expected of them, yet they did not receive the necessary reaction from politicians

Seven years have passed since the outbreak of the Arab Spring revolts, which were the most prominent developments in recent history. In 2011, the Arab youth in Tunisia, Egypt, Libya, Yemen, Syria and Bahrain took matters into their own hands and filled streets and public squares to end the decades-long suppression, corruption, nepotism and patronage. In the initial months of the protests, the masses managed to topple dictators in Tunisia, Egypt, Libya and Yemen. Shortly afterward, many countries, including Syria, Yemen and Libya, slid into chaos – which lasted for years and resulted in extreme and unexpected destruction. With the notable exception of Tunisia, looking at the political situation in Arab Spring countries today would frustrate observers, who once hoped that the popular uprisings would achieve their objectives. As such, the question is whom the world must blame for derailing the Arab Spring revolutions: The Arab people, who were perhaps not ready (or even fit) for democratization, or the elites?

American political scientist Samuel Huntington, who wrote the famed "Clash of Civilizations" in 1996, coined the term "Third Wave of Democracy" in the wake of the democratization of Eastern Europe and Latin America. Claiming that the effectiveness of democratization processes was linked to a set of cultural and social dynamics, he warned that the theory did not apply to Arab and Muslim countries because, in his view, Islam put "obstacles to any genuine democratic transition."

Huntington's thesis has been studied by a number of researchers, who hoped to discover the relationship between religion and democratization. While some scholars concluded that certain religions could have a negative impact on processes of democratic transition, others noted that the statistical evidence used in discussions had been vague for years. In this regard, they added that certain societal factors, including tribal identities undermining the creation of national political movements that represent all citizens and sectarian identities prioritizing group goals over national interests, may prevent democratic transition altogether.

In an interesting article published in the Journal of Democracy on democratization in the Arab Spring countries, political scientists Juan J. Linz and Alfred Stepan refuted Huntington's claims by stressing that there were many Muslim countries, where Islam coexisted with democracy and democratic principles took hold among the people. Recalling that the population of countries like Turkey, Albania, Indonesia and Senegal, they noted that more than 300 million Muslims around the world lived under democratic governments. If we add 180 million Muslims living in India, Linz and Stepan added, it would be possible to note that no less than half a billion Muslims lived under democracy.

Last year, I participated in a symposium on the failure of democratic transitions in the Arab world. One of the speakers, who hailed from one of the Arab Spring countries himself, launched an unadulterated attack on the Arab people, argued that they had failed the first test of democracy and concluded that millions of Arabs simply wanted to be humiliated and enslaved by tyrants. My understanding was that his primary target was the people of Egypt, who, the speaker said, kept their silence in the face of the Egyptian military's atrocities following the 2013 coup d'état against Mohammed Morsi, the country's first democratically elected president.

To be clear, it is difficult to understand what exactly Arab elites expected ordinary people to do – on top of everything they already sacrificed. When the people had to take action and refuse to be ruled by dictators, they indeed took necessary steps. In 2011, the streets of Arab countries were filled with young people who did not fear the batons of police officers or the tanks of soldiers. Following the downfall of dictators across the Arab world, ordinary people were expected to come out yet again to practice their right to vote in national elections. In Egypt, Yemen, Tunisia and Libya, millions of citizens went to the polls and participated in popular elections. Both during the mass protests and in elections, the Arab people were expected to mobilize. Finally, they were asked to believe in the elites for whom they voted.The Arab elites, for their part, did not act responsibly. Nor did they accomplish their historic mission in the initial stages of the Arab Spring revolutions.

Instead of forming unified councils to maintain the revolution's momentum and preserve its accomplishments, the elites were divided among themselves because they were primarily focused on short-term, temporary and partisan objectives at the expense of national and popular interests. As the counter-revolutionary forces regained their strength and took steps to crack down on revolutionaries, the Arab elites were busy fighting over official posts and parliamentary quotas. In the case of Egypt, the Islamic and liberal movements clashed for almost a full year over the control of certain ministries and seats in the Shura Council.

When they reached a deadlock, most elites opted to partner with the military junta against the people. In the end, a bloody coup d'état took place and thousands of peaceful protestors were killed. Today, thousands of others are still behind bars.To be clear, the situation was no better in other countries. Differences of opinion among elites in Libya made it possible for some ambitious generals to make a comeback – which divided the country between two parliaments and three political authorities. In Yemen, the elites, who used to be revolutionary leaders, have evolved into opposing parties in a proxy war between Iran and Saudi Arabia.

In the end, it was the people of Yemen who had to pay the price by suffering from a cholera epidemic and facing displacement. Finally, in Syria, the elites have been divided into hundreds of political coalitions and military factions, as the Bashar Assad regime kept expanding its territory and captured one area after another.There is no doubt who was responsible for the Arab Spring's unfortunate fate: The Arab elites, and the Arab elites only, derailed the revolutions.