The war of dictators, rebels and imperialists in the Middle East 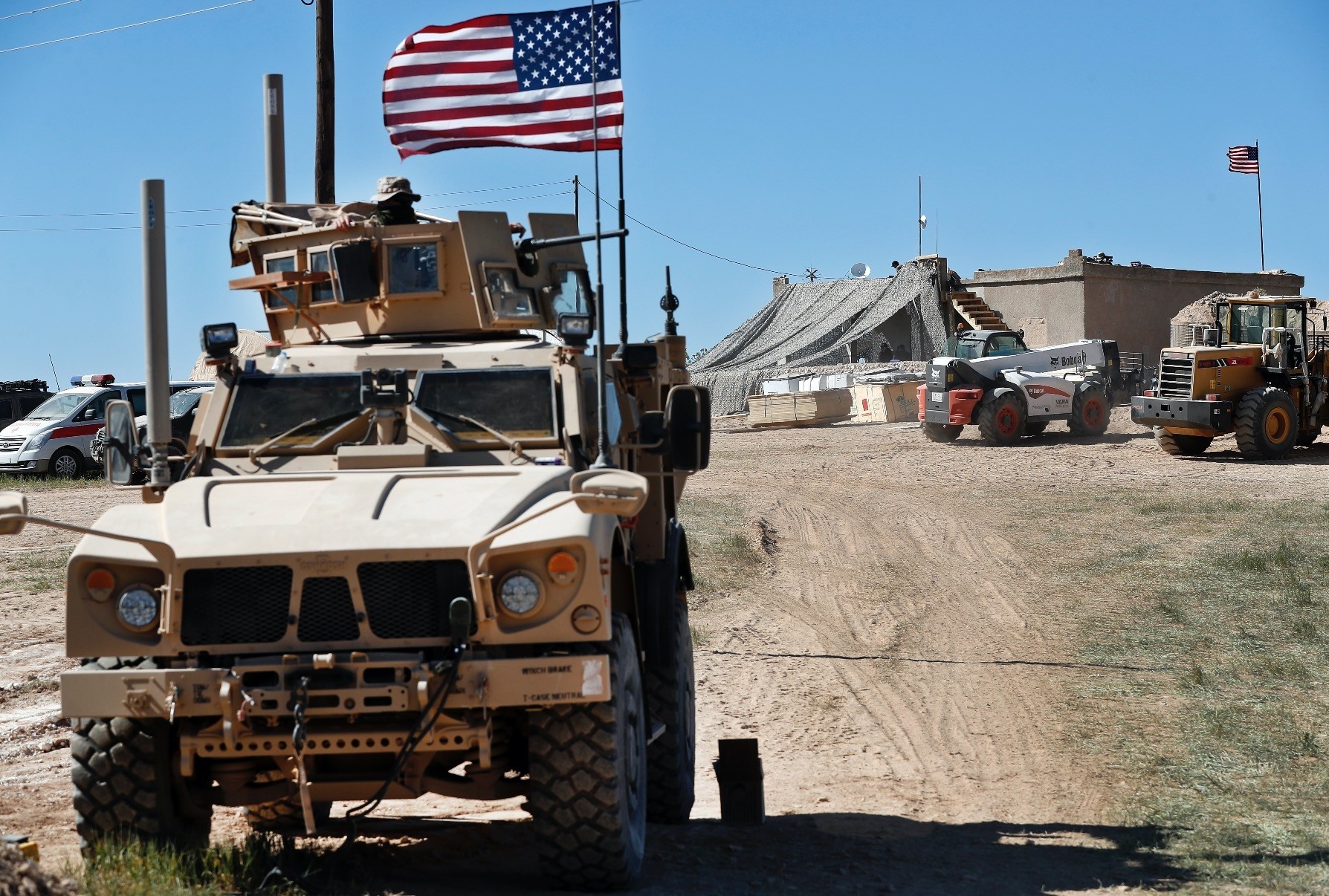 A U.S. soldier (L) sits on an armored vehicle at a newly installed position near the line where a Turkish-backed opposition group maintains the anti-terror offensive, Operation Olive Branch, against the U.S-backed YPG, Manbij, Syria, April 4.
by Ergün Yıldırım Apr 09, 2018 12:00 am

The ongoing wars in Syria and Iraq have already spread beyond these countries' borders. The stage of urban warfare was already passed, and we witness clashes for villages and hamlets nowadays. We watch the battle engulf Syria's townships and villages. These battles, in which government forces fight against terrorist groups, are quite worrisome. On one side is states equipped with all the legal and economic might of their institutions and on another side is terrorist groups and rebels. Imperialists, dictators and rebels fight all together.

Saddam Hussein, Anwar Sadat, Muammar Gaddafi and Hafez al-Assad, all of them first-generation dictators of regimes that had been founded by military dictators riding on the wave of Arab National Socialism in the 1960s, have been replaced by new ones. Egypt's el-Sissi and Syria's Bashar al-Assad currently represent the latest ideal type (to borrow Max Weber's concept) of these dictators. They manage to persist despite their militaristic organizational structures, torture chambers, their republics without democracy, their tendency to regard social movements essentially as a threat and their incompetence in economic management.

When political opposition evolves into revolt, they wear their uniforms again and carry out every kind of massacre. El-Sissi has even resorted to collaborating with Israel to suppress rebels. Indeed, the militant group Ansar Beit al-Maqdis of Egypt had pledged allegiance to Daesh leader al-Baghdadi's self-styled caliphate, declared the creation of Sinai Province and shook the government's authority across the region with more than 1,000 militants. Failing to cope with that threat, el-Sissi's government has allowed Israeli involvement. Now the Sinai region has become virtually ruled by Israeli intelligence. Assad has killed more than 600,000 people, bombed cities and displaced nearly half of the population.

Middle Eastern dictators prefer waging wars within the country through the military means at their disposal to changing the political system. They try to create legitimacy for themselves by fighting against rebels and terrorist groups. Hence, they do not refrain from cooperating with Israel and imperialist states in every way. In an effort to maintain their regimes, they know no bounds in deeds of evil.

Every day we witness new clashes around villages and new groups of fighters. Different rebel groups emerge, which make the headlines all over the world for a while and then disappear for good the next year. Some terrorist fighters switch allegiance from Daesh to the PKK and some switch allegiance from al-Qaida to Daesh. Until 2006, al-Qaida had been known for its activities in the Middle East and across the world. Then Daesh appeared on the scene. We saw a brand-new terrorist group in decades; a terrorist network that is agile, mobile, chaotic and asymmetric, which knows no limits in its attacks and which demonstrate every type of savagery. What emerged was a structure that chose a certain territory as its base, declared a caliphate and raised a flag there and presented itself to the world as a state. Daesh projected itself as "destructive hope" by using local tribes and all the dramatic aspects of occupation and resulting grievances.

With Daesh, sectarian fault lines were directly activated as a terror policy and project. In place of al-Qaida's "global Islamic resistance movement," a "jihadist" approach was developed, which operates with reference to local, sectarian and tribal rivalries. The expected liberation was associated with a specific geography. The land of the liberation utopia materialized and even a capital was proclaimed: Raqqa. The dream of an Islamic State, which had been sought by Islamist groups since the Cold War era, materialized with Daesh in a brutal and archaic political form. Due to these insurgency and terrorism practices, the idea of an Islamic State, which had been propounded for nearly a century, came to be equated with brutality around the world through new mass media.

Dozens of rebel groups and movements that had emerged alongside al-Qaida assumed different roles in the new fields of conflict, war and death across the Middle East. In addition to those fighting for their ideals, militias fighting for money have appeared as well. There are those who fight for a tribe one day and for rebels or regional powers the next day. The disruption of the routines of everyday life forces people to play unusual roles. A shopkeeper can become a fighter, a sportsman can become a militia commander, and a student can become a militant or a terrorist. Again, mercenaries who fight on behalf of non-regional countries' imperialist designs are multiplying. Apart from establishing alliances with local states, global imperialist powers also openly collaborate with local rebels and terrorist groups.

For instance, the U.S. cooperates with the PKK's Syrian offshoot Democratic Union Party (PYD) and uses it as a proxy on the ground. It is trying to continue the practice of regional conflict through this organization. Especially the failures that followed from the invasion of Iraq and negative consequences of the ensuing military spending have led the U.S. to work with terrorist groups. It supplies thousands of truckloads of weapons and ammunition to these groups. It is training them at bases that it established in certain towns. Its presence in Syria is maintained through these groups. Mercenary legions appear on the scene again. Meanwhile Russia, another imperialist power, is directly supporting the Assad regime and mobilizing various foreign fighters. It is testing more than 200 new weapons in conflicts across the Middle East. Imperialist powers view Syria as a laboratory to test their new weapons systems. For the first time in history, war serves as a laboratory to such a great extent.

What kind of alliances and interaction do we see in the wars across the Middle East? All the treaties that were signed after the World War I are being discarded. Most of the times by Russia and the U.S., which are the permanent and leading members of the U.N. To a degree unprecedented in history, great powers compete with their rivals in a specific region by unleashing proxy wars. The Middle East is becoming a war theater. As cities and towns are ruined, international order and treaties also decline. So, not only the cities and towns of Syria and Iraq but also the very political values and institutions upon which the modern world is predicated are collapsing. Values and principles of the states that supposedly shape global order are at their lowest ever.

Today, the Middle East is a region where dictators, imperialists and rebels live together by fighting and conducting massacres. These lands, where the three monotheistic religions in the history of mankind had been born, are undergoing the severest crisis in history once again. Mongols, Crusaders and Khawarij-Qarmatians, with all their destructive historical ghosts, re-merge in this ancient land equipped with modern weaponry.