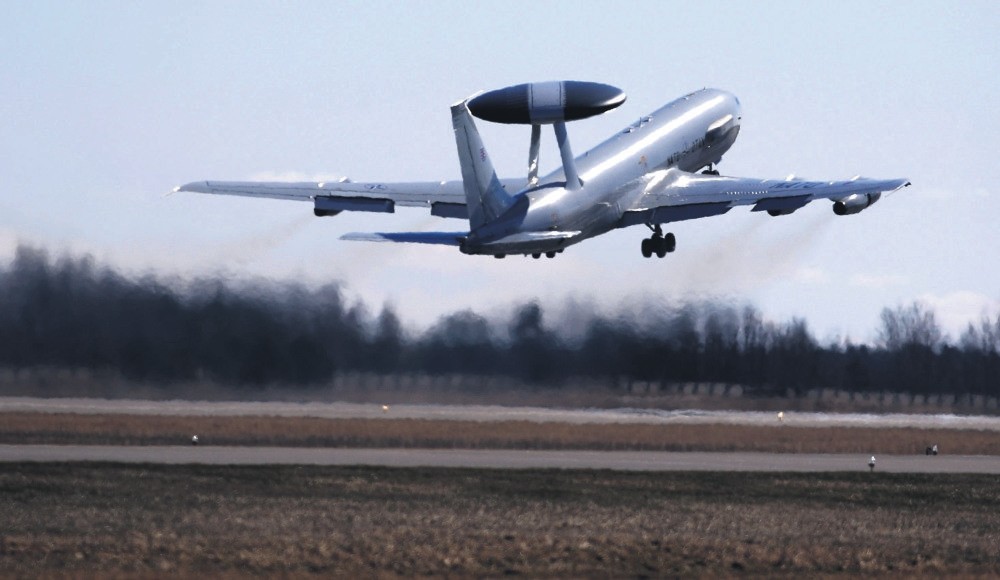 A NATO Airborne Warning and Control System (AWACS) aircraft take off during the Lithuanian - NATO air force exercise at the Siauliai Air Base some 230 kilometers east of the capital, Vilnius, Lithuania, April 1, 2014.
by Abdullah Çelik - Görkem Dirik Apr 10, 2018 12:00 am

The classical understanding of the Cold War is over, and the world has entered a new political era. However, the rules of the game remain the same. This is to say, what we observe today is an ever-divided world, melting borders and the triumph of a realist school of thought, which stresses the power struggle between the West and the East. The proxy wars have reached their peak, mainly due to the ideological crisis in the post-Cold War world order. Hence, this requires us to scrutinize the past in order to comprehend today's political conditions and to presuppose the future.

During World War II, the U.S. and the Soviet Union found themselves fighting side by side against the Axis powers. However, this collaboration was very conditional between the two superpowers of the day. After the war, the struggle between the two ideological polar nations of the world had significantly appeared toward establishing the world order. In this regard, the world was shared between the U.S. and the USSR into two laterals. Nonetheless, Soviet communism was perceived as an aggressive totalitarian regime by the U.S., hence the U.S. was reluctant to treat the USSR as a legitimate part of the international community. The lack of trust combined with the security dilemma between the West and the USSR culminated in ideological differences, which reached its climax and put a concrete end on the war-time conditional alliance. As a result, the world found itself in oscillation between capitalism versus communism, democracy versus totalitarianism, and civic state versus military state.

It is imperative to note that, in such a political atmosphere, the main goal of both laterals was to increase the number of their ideological allies, which would expand their sphere of influence around the globe. In this competition between worldviews, the U.S. and the USSR had utilized several methods, including a carrot to attract and a stick to coerce their new candidate countries. However, thisideological competition soon turned into an arms race, which brought the two superpowers to the edge of war in the 1960s. Particularly, when the socialist revolution took place in Cuba, this, in parallel, led the Soviet Union to launch intercontinental ballistic missiles that could be used against the U.S. In retaliation, the U.S. installed Jupiter missiles in Turkey to deter the USSR from using Cuba as a military base. This marked another turning point in terms of accelerating the arms race as an instrument of "deterrence," in which both sides showed their muscles but never stroked each other. Instead, they used fists of others to cripple each other, as in the cases of Korea, Vietnam and Afghanistan.

From the 1970s onward, the USSR started to face serious economic stagnation and had to deal with sociopolitical issues, mainly stemming from the arrival of the tide of nationalism among non-Russian ethnic groups. For many, in the beginning of the 1980s the USSR had already lost its legitimacy and its ideological sustainability. All these factors accelerated the dissolution of the USSR, which, in parallel, underlined the victory of Western-led liberalism and capitalism. The world took a deep breath and celebrated the end of the possibility of the most destructive war between the USSR and the U.S.

However, the détente period between the two blocs did not last long. The rise of the East, led by opposition countries to the Western-dominated world system such as China and Russia, soon challenged the status quo. This increased the tension and the West became very suspicious about the irredentist aspirations of, particularly, Russia. Therefore, this was the main motivation behind the EU and NATO's reactive decision to integrate the Eastern European and Baltic countries into the Western orbit. Particularly, the 2004 and 2007 EU and NATO enlargements toward the former USSR countries provoked Russia to take a harsher stance against the West. This led to three major crises in the last 10 years between Russia and the West: The five-day war in Georgia in 2008, the Syrian crisis in 2011 and the Ukrainian crisis in 2014. The common characteristic of these three crises is that they began as intra-state conflicts, which then transformed into inter-state conflicts due to the intervention of the West and Russia, supporting opposing parties. For many, this was also another indication of how Russia pushes its limits to acquire its former status as a superpower and how the West attempts to preserve its dominant position.

For many experts, this quarrel between Russia and the West caused Russia to not recognize the Western-led international law anymore, and the U.S.-dominated unipolar power system. Instead, ever since he was elected, Vladimir Putin attempts to form a Russian polar by opening new fronts and introducing three main instruments in Russia's ongoing struggle with the West.Firstly, almost all Russian-involved crisis, stretching from Transnistria to South Ossetia and Eastern Ukraine, have transformed from tense into "Frozen Conflicts." This provides Russia leverage to act as a "watchdog" and frequently to adjust the rules of the game on the table by threatening to heat up the conflicts.

Secondly, the introduction of hybrid warfare, particularly during the Ukrainian crisis, altered the conventional nature of Western concepts of war. Generally speaking, the term "hybrid warfare" refers to the utilization of military force supported by irregular and cyberwarfare tactics. Nevertheless, in the Russian concept, hybrid warfare connotes the "nonlinear conflict."

Thirdly, the Russian minority in the Baltic region have become an instrument in this ongoing crisis between Russia and NATO. This is to say, after the annexation of Crimea, the Russian rhetoric to legitimize the annexation based upon the fact that the Russian population living in the peninsula had to be protected from the West and the central government of Ukraine. This alarmed the West if the same scenario could repeat itself in the Baltics, given Kremlin-led provocative steps to intimidate the Baltic governments of Latvia, Lithuania and Estonia by stressing Russia's right to protect the Russian population in these countries. This resulted in the U.S. and NATO's military activities to be intensified in the region by deploying ballistic missiles, tanks and additional Special Forces in the Baltic countries. In response, Russia took similar steps to use its last Western stronghold, the Kaliningrad oblast, by launching Iskandar missiles.

As can be seen, the augmentation of tension between Russia and the West brought an arms race back on the agenda. However, instead of quantity, as in the classical understanding of the Cold War, this time countries opted for quality and for modernizing their nuclear arms and military capabilities vis-a vis each other. In this regard, we have observed the U.K. and France modernizing their nuclear submarines, the U.S. allocating a new budget to an overall modernization of its nuclear capability, while Putin threatened, in his last speech, the world with a recently invented "unstoppable" nuclear weapon. Although there are still uncertainties about the limits of this arms race, it can be said that this time the world is going to witness a warmer "Cold War" if both sides continue proceeding the "retaliating" policy against each other.

Taking all these developments into consideration, we have detected three major issues in Russia's continuing attempts to challenge the Western-led unipolar power system.

First of all, economically Russia is not a superpower anymore. In contrast, according to many experts, Russia is a petro-state, whose economy is run by Putin-controlled oligarchs, and whose economy suffers an endemic corruption problem.

Secondly, unlike communism versus capitalism, Russia could not manage to enter in a new ideological war with the West. This hinders Russia's role to become a universal actor, which would embrace other countries by offering a new ideology, as it was successfully done by the USSR. In relation to this, as Russia failed to find ideological and economic allies, this led Russia to be isolated from the rest of the world and to be imposed economic sanctions due to its aggressive actions in Ukraine and Syria.

Thirdly, the recent Russian offensive, particularly the second Litvinenko case (Skripal) in the U.K., motivated Western countries to give a collective answer to Russia. This has united a much divided Europe after Brexit, and has put once pro-Putin U.S. President Donald Trump on the same side with Europe. This collective reaction resulted in the declaration of almost 170 Russian diplomats as "persona non grata" from 16 different countries around the world. Moreover, this also diminished the diplomatic ties between the West and Russia, which can be seen as a harbinger for new conflicts.

* Çelik and Dirik work for the TRT World Research Centre