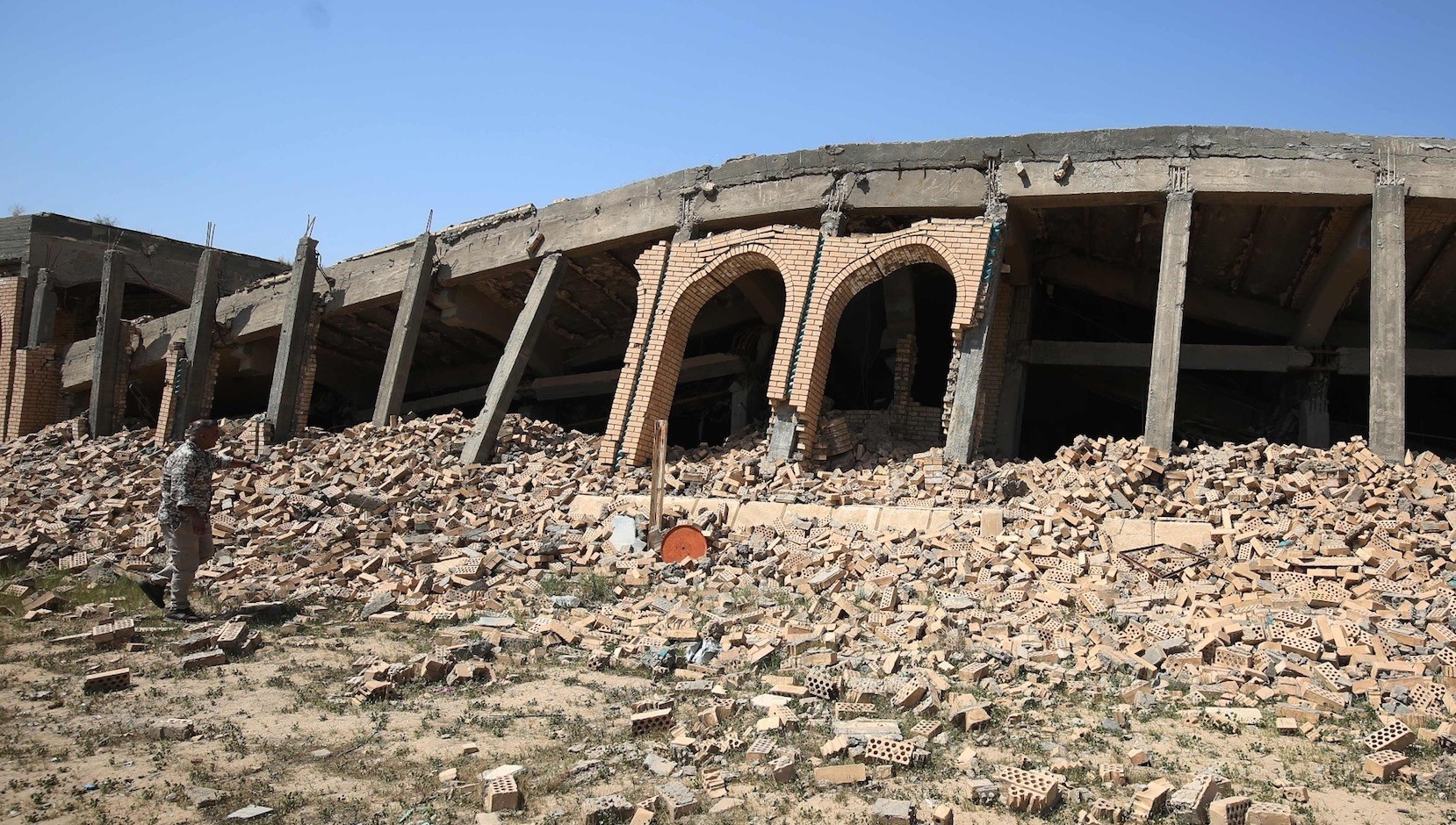 An Iraqi fighter checks the severely damaged tomb of Iraqi dictator Saddam Hussein in his home village of al-Awja on the outskirts of Tikrit. It has been reduced to shattered concrete and tangled barbed wire with no trace of his remains.
by Fahrettin Sümer Apr 18, 2018 12:00 am

Since the U.S. occupation of Iraq in 2003, the country could not fully stabilize and its future unity has been questioned. Following the occupation, Iraq was ruled with a temporary law, the Transitional Administrative Law (TAL), until a new constitution was adopted in October 2015. Since the constitution allowed for the establishment of regions, autonomous Iraqi Kurdistan, the roots of which go back to the 1990s, was formed by Irbil, Sulaymaniyah and Dahuk provinces joining together.

Iraqi Kurdish leadership actively participated in the formation of the constitution the autonomy was accepted by all parties.The end of Saddam Hussein's authoritarian regime and the adoption of the new constitution created hope for a democratic and economically prosperous Iraq. The constitution created a parliamentary system where multiple parties compete for parliamentary seats. Several parliamentary elections have been held and the executive leadership, i.e., the president, prime minister and the cabinet were formed according to election results. Thus, the country has been operating within a democratic framework since 2005.

The upcoming May 12 election is likely to create a parliamentary composition that will require the formation of a coalition government again. While prime ministers have been Shiite Arabs, the symbolic presidency has been filled by Kurdish politicians and the speaker of Iraqi parliament and a vice presidency have been allocated to Sunni Arabs. Kurds are represented in Iraqi political institutions and also have their own Kurdistan Regional Government (KRG) in Iraqi Kurdistan with its own parliament, prime minister and president.

Despite its democratic institutions, there have been issues with the workings of the system. The Maliki period saw the arrests of some Sunni politicians, and terrorist violence in Baghdad and the surrounding areas negatively affected peace and stability. Ruling political elites have often been accused of ethnic and sectarian clientelism. The country's economic institutions have been weak and its public sector has not been efficient. Corruption, allegedly, has been rampant. The KRG and the Iraqi central government have been having disagreements over the division of powers between them, internal borders of the disputed territories, production and sale of oil in Iraqi Kurdistan and revenue sharing.

Last year's Sept. 25 independence vote in Iraqi Kurdistan was conducted partially for domestic political gains by mobilizing Kurdish nationalism, but was partly a result of the unsettled disputes, with a hope of gaining a better bargaining position for the KRG in a future settlement. But the central government retook the city of Kirkuk and some other parts of the disputed territories that included several oil fields from the peshmerga, which had been divided along the party lines of the Kurdistan Democratic Party (KDP) that controls Irbil and Dohuk provinces and the Patriotic Union of Kurdistan (PUK) that controls Sulaymaniyah. Thus, a new de facto situation has been created along the disputed territories.

While Iraq dealt with multiple problematic issues, Daesh, which originated from al-Qaida in Iraq, grew into a security threat in Syria and Iraq during 2012 to 2014. Capitalizing on the chaotic civil war in Syria and the unhappy Sunni population in Iraq, the terrorist organization took control of massive territory in a relatively short period of time. Many were taken by surprise when Daesh captured Iraq's second-largest city of Mosul in June 2014, which showed the weakness of the Iraqi security apparatus at the time. It took about three years for a strengthened Iraqi army to retake control of Mosul and the territories that fell under Daesh in Iraq. Parallel to the deteriorated security situation, the economic situation also deteriorated after 2014 in the whole of Iraq, but especially in Iraqi Kurdistan. Not only did foreign and domestic investment decline in the region, but also government spending substantially decreased to the extent that government employee salaries were not paid for long periods of time since Baghdad had cut off the KRG's 17 percent budget share due to disputes between them over oil production, sales and revenues from the Kurdish region.

The future of Iraq after Daesh is defeated

Now that Daesh is defeated, Iraqi security has improved in many locations and negotiations are ongoing between the KRG and the central government for settling disputes. Therefore, there are renewed hopes for a better future in the country. Moreover, the Iraqi government has increased its efforts for political and economic reforms, for attracting investment and for getting the economy on a path for growth. There has been international fundraising for supporting Iraq's reconstruction efforts and Turkey pledged the highest amount – $5 billion – as a loan and investment. However, the success of these renewed efforts depends on reconstruction of war-torn regions, reintegration of the provinces and their populaces who suffered under Daesh from 2014 to 2017, and solving the issues between the KRG and Baghdad.

There are over 2 million internally displaced people (IDPs) who need the government's security guarantees and help with reconstruction of their homes and cities. In 2014, about one in five Iraqis were below the poverty line, and developments after 2014 have deteriorated the situation of the poor, especially in Daesh-occupied areas. This widespread poverty not only reduces the government's legitimacy, especially when the public believes that their leadership is corrupt, but also prepares an environment for extremist ideologies and tensions among different ethnic and religious segments of the country. Both the central and the KRG governments need to adopt people-oriented policies focusing on increasing the overall welfare level in the country. Long-lasting recession and unpaid salaries have frustrated many in the Kurdish region and have led to multiple protests, sometimes violent. The central government and the KRG need to pay the salaries as soon as possible.

Aggregate demand has declined sharply in the region due to unpaid salaries, decreased investment and government spending. Therefore, the recovery of the region's economy depends on the payment of salaries, increase in government spending especially on public capital investment and creation of a stable and peaceful region for long-term investments.Iraq is an oil-rich country capable of increasing its oil revenue with more investment in production. Oil exports through Kirkuk pipeline to Turkey are expected to resume after necessary improvements to the pipeline. Such increased oil revenues can be used for reconstruction and infrastructure investments.

However, in the long run, the country needs to reduce its high oil dependency by diversifying its economy. Currently, 90 percent of the Iraqi government's revenues come from oil. Such a high dependency creates big swings in government revenues year by year as they depend on oil prices. In fact, when oil prices declined around 50 percent in 2014, the country started to have significant budget deficits while its defense spending was increasing, and it had to borrow over $18 billion from the International Monetary Fund (IMF). Reduced public investment spending during this period weakened the overall economy. Improved infrastructure and public services will create a more conducive environment for economic growth. A better private investment environment needs to be created and diversification of the economy needs to be achieved in the long run. Moreover, the country's weak financial sector needs to be strengthened so that financial institutions can mediate between money savers and investors.

In order to achieve its long-term economic goals, the country needs a stable political and security environment. Internally, the government needs to improve the overall security environment further. All illegitimate groups with weapons need to be taken under control. The country's legal system, rule of law and law enforcement need to be strengthened. Kurdish and Iraqi political leaders need to take steps to settle their disputes and develop trust and a stable, long-term relationship. Democratic political institutions as well as market-oriented economic institutions should continue to be improved. Both Baghdad and Irbil need to bring more transparency, accountability and efficiency to their public sectors. Externally, Baghdad and Irbil should continue to improve their economic and political relations with neighboring countries so that trade and long term investment can flourish. Secure and predictable economic and political environments will attract more foreign direct investment and strengthen domestic private investment.