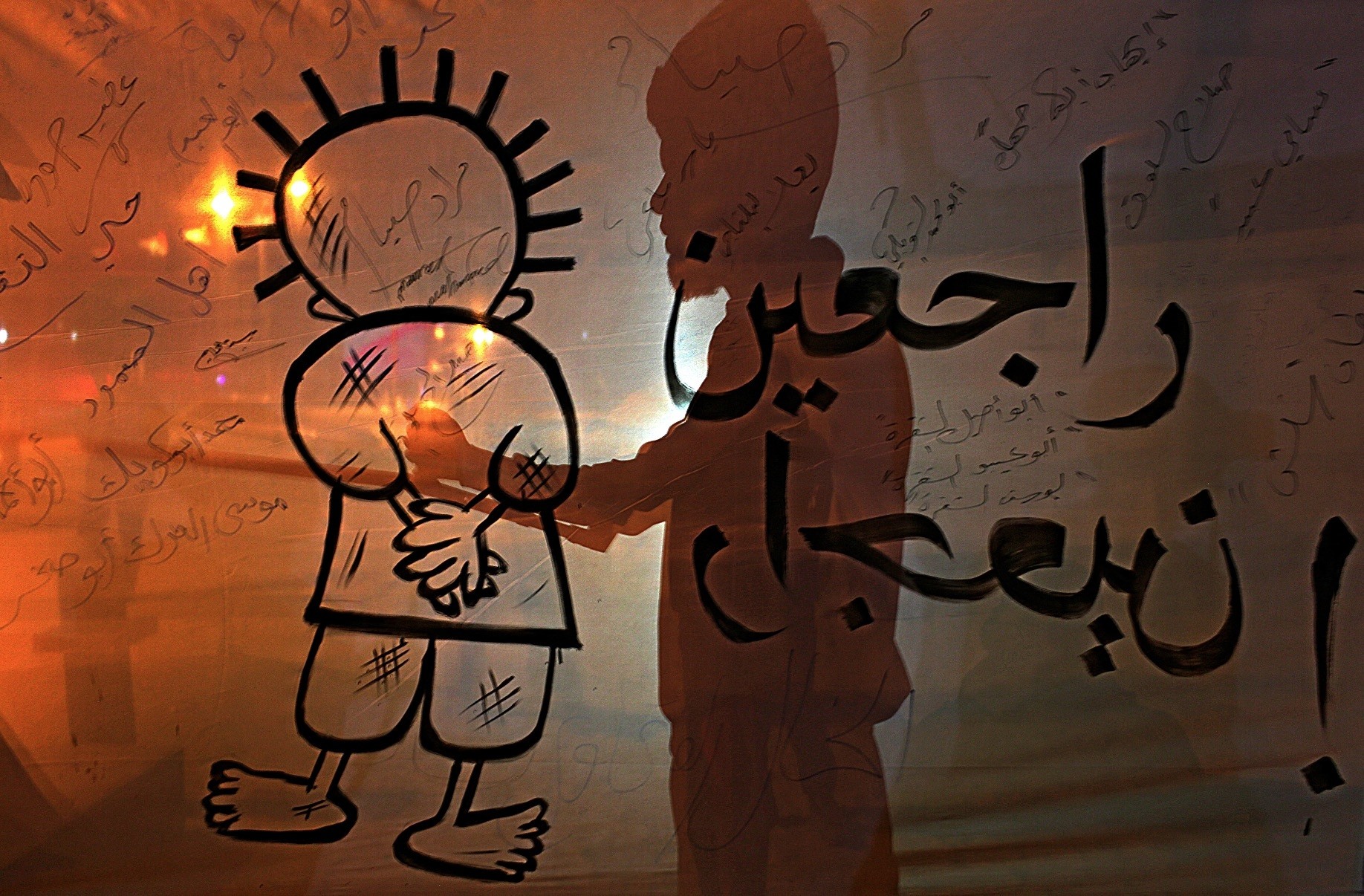 Shadow of a Palestinian protester at a tent with Arab words reading ,We Will Return, and a Handala cartoon - a potent symbol of the struggle of the Palestinian people for justice and self-determination, east of Gaza, April 17.
by Ali Abo Rezeg Apr 23, 2018 12:00 am

For the fourth Friday in a row, tens of thousands of Palestinians in the blockaded Gaza Strip converged to the 45-km long borders with Israel taking part in a six-week long sit-in dubbed Great Return March. According to the organizers of the event, this move aims at confirming on the Palestinians' Right of Return, a return to the areas and lands they were forcefully driven out in 1948, the year refers to the infamous Nakba or the Palestinian Catastrophe.

The move, as well, targets to alleviate the decade-long suffering came as a result of the air, sea, and land tightened siege Israel imposes over the Gaza Strip, which caused severe living conditions inside the coastal enclave. Since, terrifying the statistics being released by the international and local agencies regarding the humanitarian crisis in Gaza.

According to official data, Gaza's poverty ratio is among the highest in the world as 80 percent of Gazans fell beneath the poverty line and unemployment reached 50 percent. Even Gaza's water is not safe for human use. People there are suffering also from big power shortages; they only get electricity for six hours a day, which badly affects services like sewage-treatment plants.

Even the blockaded strip's only means of access to the outdoor world, the ill-famed Rafah border crossing, is closed throughout the year. That makes Gaza, with a population of 2 million people, the biggest prison in the world.

However, Gazans first demand was not to lift the siege, but rather, to implement the U.N.'s General Assembly resolution 194, which called for compensating and returning the Palestinian refugees and displaced to the places and lands from where they were expelled in 1948. Surprising numbers of people took part in the return marches, dozens of thousands filled five different squares along the borders with Israel, the marchers there were raising one flag, the Palestinian state flag, gathering in a single place, the borders, and chanting one slogan, the slogan of return.

As a Palestinian from Gaza, dozens of hours I spent following the developments of the marches since they were launched in March 30, marking the 42nd Land Day anniversary. Handful of messages the Gazan demonstrators were directing via these marches: to Israel, to the Arab region, to the world, and even to the leaders of the internal political scene.The message Palestinians in Gaza sent to Israel on the two Fridays that the Palestinian second or third generation still remembering and demanding their right of return to their lands in historical Palestine.

Among Israelis, it was circulated that Palestinian aged people would die and the upcoming generations would forget, which was totally refuted by Gazans within the march, in which we had seen children, women, youth and the aged contributing. Another big message was extended to Israel that for the eleventh year in a row, Israel, by the blockade policy, was seeking to prompt Gazans to explode internally, to fight against each other by claiming that the Palestinian resistance is the main dynamic behind their continued suffering in the deprived strip. But, Palestinians in Gaza proved that they were aware enough not to do so and when the decisive moment came, it was against Israel and against the seven-decade-long occupation.

The Return March was carrying a message to the Arab region as well and that was clear during the banners the marchers were raising and within the interviews they gave to many local and international media outlets. Palestinians in general, particularly inside the blockaded Gaza, were extremely angered from the latest Arab statements and actions seeking to normalize relations with Israel in exchange of nothing, but, alas, at the expense of the Palestinian cause and the people's interests. Most importantly, what was revealed of the Arab consent regarding the U.S.-developed peace plan known as "Deal of the Century." Palestinians were obviously saying that they, themselves, have the only right to decide on the fate and future of their cause and no one has to determine in the name of the Palestinian people.

On the international level, Palestinian marchers were attempting to draw the world's attention to their cause after becoming, recently, sidelined due to the emergence of different new crises on the regional and international arenas. During the latest months, mainly, following Trump's controversial declaration on Jerusalem and his intention to relocate the U.S. embassy from Tel Aviv to there, Palestinians felt that there has been a serious attempt to completely terminate their cause. These attempts were taking advantage of the internal Palestinian division and the fragile Arab situation caused by the unfinished Arab revolutions. The wide participation of Palestinians in the peaceful march asserts that Palestinians will be a barrier against any bid aimed at eliminating their just cause and they are ready to march for years with a view to repulsing these suspicious plans.

Internally, Palestinians were showing their decade-long quarreling leaders that the Palestinian rights are able to unify the all spectrums of the Palestinian people. In the marches, I have seen people belong to Fatah, Hamas, Popular Front and Islamic Jihad, I saw independent people carrying no political views. The return marches and the wide public participation in them rejected the significance of the political split or division among Palestinians. Yasser Arafat said on different occasions that Palestinian people had been always greater than their leadership, we've seen in the marches that still they are.