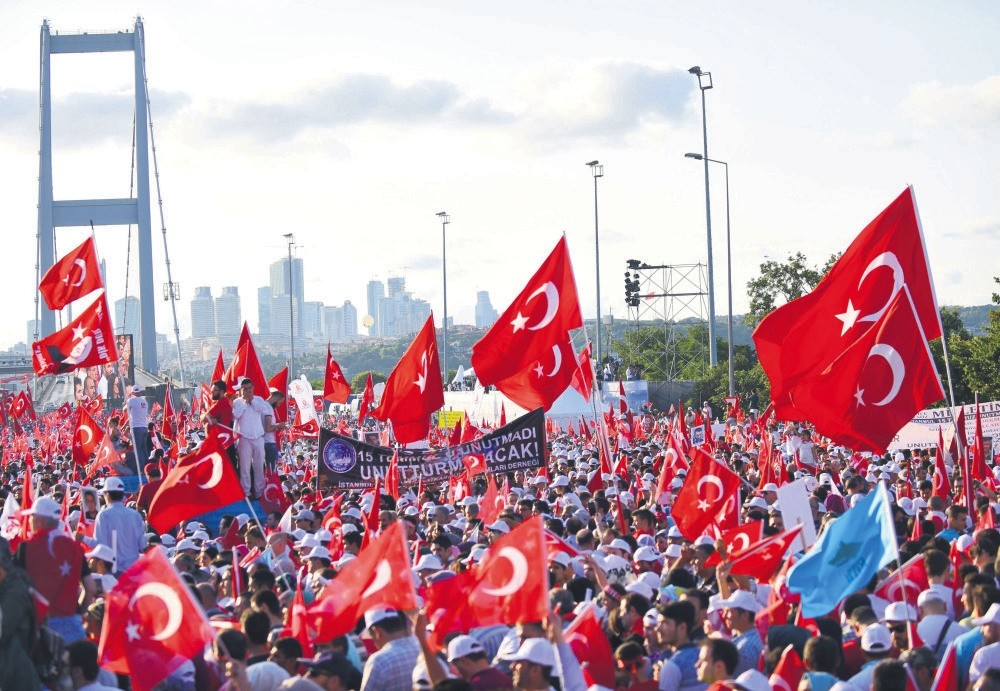 People wave Turkish national flags as they stand near the July 15 Martyrs Bridge in Istanbul on July 15, 2017. Turkey has marked almost two years since the defeat of the coup attempt.
by Markar Esayan May 01, 2018 12:00 am

Addressing Parliament on April 17, Nationalist Movement Party (MHP) Chairman Devlet Bahçeli started a dizzying process by calling for early elections: "We changed the system of government on April 16, 2017. We must now start its implementation. Turkey cannot bear this tension until Nov. 3, 2019. Let us hold elections sooner and vote on August 26 instead." The next day, Bahçeli held a prescheduled meeting with President Recep Tayyip Erdoğan which was supposed to focus on harmonizing laws, and the two leaders agreed to hold early elections on June 24, 2018.

Over the past 15 years under the Justice and Development Party (AK Party) government, Turkey witnessed a number of historic developments. Close followers of Turkish followers would immediately think back to 2007, which was a particularly difficult year for the country. Needless to say, that year was the key to understanding the contemporary developments.

Then President Ahmet Necdet Sezer's seven-year term was to expire in the summer of 2007. At the time, presidents were elected by parliamentarians rather than the electorate. Under those rules, 376 out of 550 parliamentarians needed to support a given presidential candidate to conclude the election in the first round. The AK Party did not have enough seats for a first-round victory, but it could ensure a third-round victory for its candidate of choice.Shortly after, the Constitutional Court violated the law by ruling that at least 367 parliamentarians had to be present in Parliament for the presidential election to take place. This was a politically motivated decision intended to block the AK Party's presidential candidate from winning the election – even if it meant breaking the law. It seemed that the judiciary, in cooperation with the military-based bureaucracy, intended to overthrow the country's democratically elected government. On April 27, the Turkish Armed Forces (TSK) issued what came to be known as an e-memorandum, reiterating its commitment to the principle of secularism and warning that it would not stand idly by if a presidential candidate, whose wife wore the religious headscarf, were to win the race. As the military issued thinly veiled threats against Turkey's civilian leadership, massive rallies took place in Istanbul, Izmir and elsewhere in which participants carried banners calling for the TSK to take action.

The AK Party government delivered a response of unprecedented strength to the e-memorandum. For the first time in Turkish history, elected officials refused to backtrack and instead called the military's bluff. Then Prime Minister Recep Tayyip Erdoğan and his party called for early elections, which took place on July 22, 2007 and resulted in a landslide victory for the AK Party. Having received 34 percent of the vote in 2002, the movement received the support of 47 percent of the electorate – who sided with democratic forces against the establishment.

In the aftermath of the 2007 elections, two important developments took place. First, the Nationalist Movement Party (MHP) caucus, including Bahçeli, participated in the presidential election. Although they supported their own candidate, the party broke the gridlock caused by the Constitutional Court's 367 ruling. Endorsed by Erdoğan, Abdullah Gül became Turkey's 11th president.

The wound inflicted by the Constitutional Court, however, was still bleeding. The court's infamous ruling made it virtually impossible to hold presidential elections in the future and facilitated the guardianship regime's control over Turkish democracy. To avoid future crises, the AK Party introduced a constitutional reform bill whereby the people, instead of Parliament, would elect Turkish presidents. On Oct. 21, 2007, 67.5 percent of the electorate voted in favor of proposed amendments.

The 1961 and 1982 Constitutions, which were drafted under the supervision of military juntas, however, empowered the office of the president at the expense of Parliament. As a matter of fact, Turkish presidents were rendered immune to judicial oversight, since coup leaders, who later assumed the presidency, wanted to protect themselves and maintain strong influence over popularly elected parliamentarians. This was exactly why presidential elections throughout the history of Turkish democracy fueled crises and, in certain cases, military coups. The military refused to let civilians control the presidency and therefore mounted pressure on Parliament and threatened parliamentarians. If all else failed, they overthrew the government.

As a result of the October 2007 referendum, however, future presidents would be elected with a simple majority. The new rule was first implemented in the following presidential election, which took place on Aug. 10, 2014.

This time around, however, Turkey experienced a new kind of anomaly. Although the popularly elected president enjoyed greater legitimacy, the presidency's vast powers and lack of accountability undermined the separation of powers. As such, the post-2007 political system in Turkey was a highly problematic hybrid model which resembled neither a parliamentarian nor presidential system. Although the country moved closer to a presidential system under the new rules, the government was still formed by parliamentarians, and the executive branch was divided between the prime minister and the president. In other words, the problem of dual legitimacy within the executive branch could potentially spark political crises, especially provided that there was still room for coalition governments. As a matter of fact, there were problems between the two offices even when the president and the prime minister came from the same political background. If they ever represented two competing factions, gridlocks would have been unavoidable.

In truth, it was Turkey's political evolution that compelled the country to reform its system of government. It was simply impossible for any government to effectively govern a great country like Turkey under the old system. Although the AK Party government was indeed successful in this regard, its accomplishments were facilitated by Erdoğan's charismatic leadership. The country, nonetheless, faced serious challenges: The AK Party was nearly shut down. The military issued a series of memoranda. In the end, a vast amount of time and energy went to waste.

Democratizing Turkey's system of government must have been a top priority for any reformist government. The country had to adopt a parliamentary or presidential system par excellence. A closer look at Turkey's post-2007 system of government would reveal that it moved away fromparliamentarism and became closer to presidential. Provided that the country needed an efficient, effective and stable government in order to cope with regional threats, the AK Party opted to mobilize popular support behind the presidential system.

In this regard, the presidential system, which was adopted on April 16, 2017, did not come out of nowhere. Instead, it was a decision necessitated by the natural flow of events and political developments.

Ahead of the constitutional referendum, Bahçeli made the above-mentioned arguments to call for a popular vote on constitutional amendments, saying that the Constitution must reflect the de facto situation. The AK Party and the MHP initially reached out to other major political parties to work together on a proposal. After being turned down, they proceeded to draft a constitutional reform bill themselves. In April 2017, 52 percent of the electorate voted in favor of proposed changes.

Just as the 2007 amendments entered into force seven years later, so too were the April 2017 changes expected to be implemented in the Nov. 3, 2019 elections. As mentioned above, that election will take place on June 24, 2018 instead.

The important point here is that all steps along the way have been taken with the overwhelming support of the Turkish people. In any democracy, elections and the popular vote trump all other concepts. In this regard, Turkey adopted a new system of government, which promotes democracy at the expense of tutelage and democratic deficit, with the population's support.

Nowadays, opposition parties argue that elections cannot take place under the state of emergency. This sentiment is echoed by the European Union and the United States. Turkey, which survived a coup attempt that claimed 250 lives and resulted in the bombing of Parliament, continues to face serious terror threats emanating from Syria in the form of Daesh as well as the PKK and its Syrian affiliate, the People's Protection Units (YPG). Provided that the state of emergency in France remained in effect for two years over a single terror attack, under which elections took place as scheduled, Turkey's actions are perfectly legitimate. The state of emergency is a constitutional measure and has no negative impact on the general population whatsoever. This legal step was taken to identify and remove undercover operatives of terrorist organizations from public service, including those associated with the Gülenist Terror Group (FETÖ), that had infiltrated state institutions.

On June 24, Turkish voters will go to the polls and all parties will respect the popular vote regardless of the outcome. Although Turkey faces serious historical and contemporary challenges, it has one of the world's most functional electoral systems.