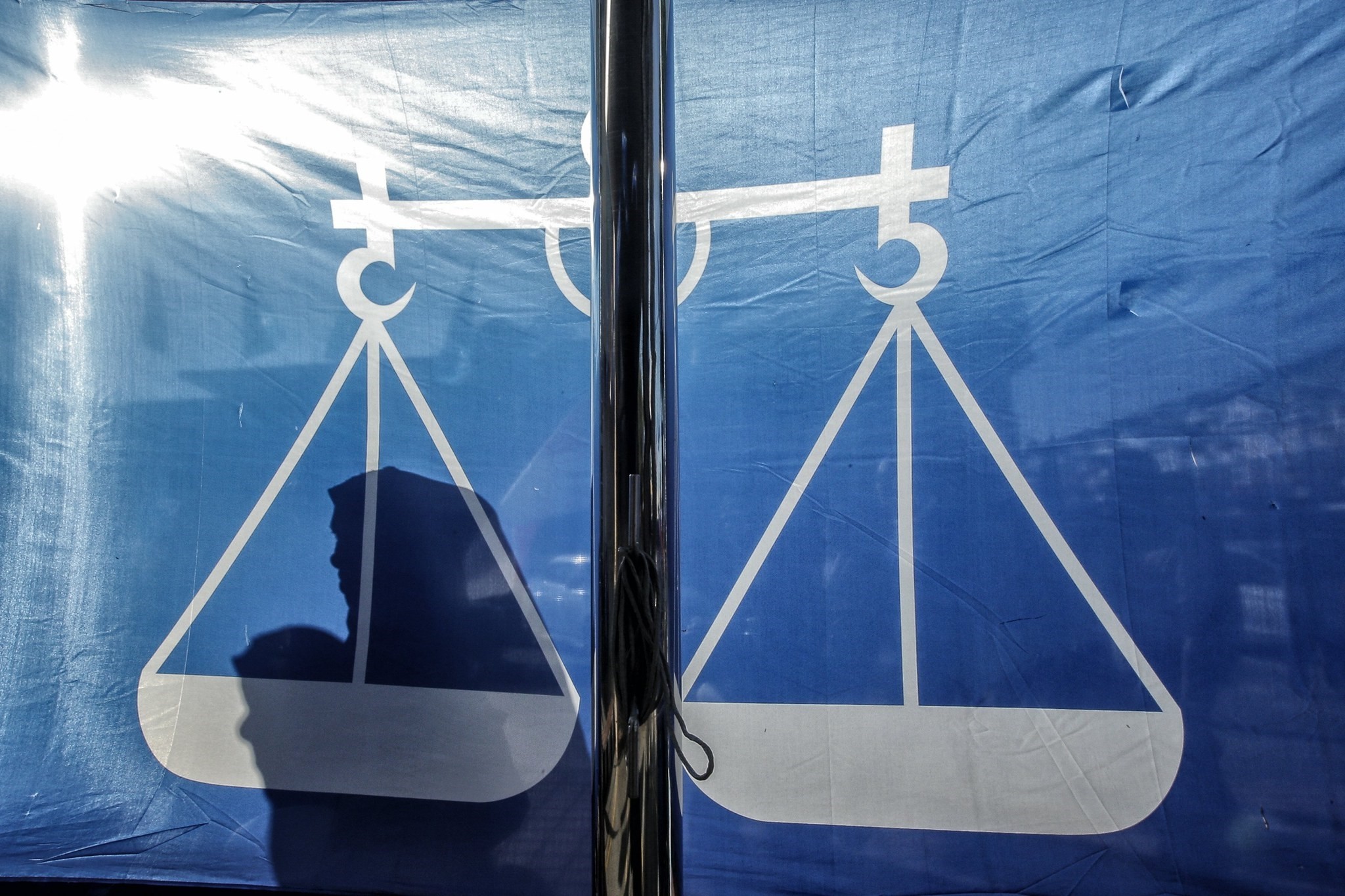 Shadows of supporters are cast on a flag of the National Front coalition (BN) party during the nomination day of the Malaysian 14th general elections, Pahang, 300 km outside Kuala Lumpur, Malaysia, April 28.
by Mushtak Parker May 02, 2018 12:00 am

The upcoming 14th General Election (GE14) in Malaysia is poised to be one of the most important and bitterly contested polls since the country gained independence from Britain on Aug. 31, 1957.

When Prime Minister Datuk Seri Najib Razak, leader of the ruling National Front (BN) coalition government, announced the dissolution of the Malaysian Parliament last month, the country's independent Electoral Commission moved quickly to announce that polling day would be on May 9.

After months of speculation about the election date, which saw the start of a de facto pre-election campaign, Malaysia's 14,968,304 registered voters finally have the certainty of when they can exercise their democratic right in choosing their next Parliament and government.

Despite the fact that Najib's ruling BN coalition is way ahead in the polls and is as certain as one can be to win next week's election – at least by a simple majority in this first-past-the-post Westminster model inherited from the British, if not by a two-third majority – the stakes are indeed high in this multi-ethnic, multi-religious Muslim-majority country.

Up for grabs are 222 parliamentary and 505 state assembly seats. It would take a political earthquake off the electoral Richter scale for the BN to lose this election and would require swathes of Bumiputra voters to abandon the coalition, which is highly unlikely if not impossible. The nature of Malaysian electoral politics suggests that voter swings are not intrinsic to local political culture.

In some respects Malaysia partly resembles a sectarian democracy. The BN coalition, for instance, is comprised of the United Malays National Organisation (OMNO), the dominant party within the coalition; the Malaysian Chinese Association (MCA) and the Malaysian Indian Congress (MIC). All of these organizations were established under ethnic lines and a motley group of 10 other smaller catchall parties, including some from the enclaves of Sabah and Sarawak.

The current oppositional grouping is the Alliance of Hope (PH) party, the main rival to the BN, which is effectively a hastily convened alternative coalition comprising the Malaysian United Indigenous Party (PPBM), a Malay nationalist party launched by former Prime Minister Tun Mahathir Mohamad and his allies; the "reformist" People's Justice Party (PKR) led by former Deputy Prime Minister Anwar Ibrahim, Mahathir's once arch-nemesis whom he jailed for corruption and sodomy; the Democratic Action Party (DAP), the Malaysian-Chinese leftist party led by Lim Kit Siang; and the PH party.

Then there is the traditional Malaysian Islamic Party (PAS), which initially joined the PH but decided to leave following the nomination and appointment of Mahathir Mohamad as its prime minister candidate for the GE14.

The BN has been in power since the country's independence and Malaysian oppositional groupings have been largely marginalized partly because they have tended to be divided, poorly led and faced with an uphill struggle in dismantling the dominance of the ruling coalition.

But given the unpredictable nature of democratic politics, in the last two elections in 2008 and 2013, the electorate did give the ruling coalition a bloody nose by depriving it of that psychological two-thirds majority, which like in Turkey, gives the incumbent government the ability to make crucial constitutional changes. The sad reality is that the Malaysian opposition is much weaker today than it was during the 2013 election, when the oppositional parties under the Pakatan Rakyat (PR) banner had one of their best electoral performances, winning 89 seats out of the 222-seat Parliament.

Mahathir, 92, and Anwar Ibrahim, 71, both well-known by Muslims, are erstwhile stalwarts of the BN – the former as prime minister for 22 long years and the latter his supposed protege rising to become deputy prime minister, only to be ousted by his mentor following an unsuccessful attempt to unseat him. Mahathir, whose health continues to raise serious concerns, has come out of retirement in an ill-advised attempt to take on Prime Minister Najib Razak and the well-established and resourced BN in a seemingly unwinnable election.

For Najib, the son of Tunku Abdul Razak, Malaysia's second prime minister after its independence, the GE14 is a personal challenge and could decide both his future and his legacy.

This unfortunately has reduced the GE14 to a political dogfight between the BN hierarchy and prominent disgruntled former members of the BN, led by Mahathir Mohammed and Anwar Ibrahim. The fact that nonagenarians and septuagenarians dominate opposition politics is a sad indictment of Malaysian politics and a wanton disregard of the country's Generation Z aspiring to enter politics.

Najib's government, which enjoys close links with Ankara, is also swimming on the tide of consistently good news on the economic front endorsed by the latest Article IV Consultation report by the International Monetary Fund (IMF) in March. The fund's directors not only commended Malaysia's management of its economy, but also stressed that economic fundamentals remain strong and the projected gross domestic product (GDP) growth of 5.8 percent for 2017 and 5.5 percent for 2018 surpassed the fund's expectations. The Malaysian economy, according to the IMF, has made remarkable strides in areas such as productivity, employment and attracting strong inward investment.

Perhaps the biggest plaudit from the IMF for Malaysia, subject to the usual caveats, is that"Malaysia's economy is getting closer to achieving high-income status," probably by 2025.

In contrast, the PH seems to be an opposition in constant disarray, with the constituent parties endlessly squabbling over Mahathir's appointment as a prime minister candidate. In its "Book of Hope" manifesto, the PH has promised a wave of populist measures including abolishing the goods and services tax (GST), increasing the minimum wage, controlling the prices of basic commodities and medicines, reviewing tolls on highways, reintroducing fuel subsidies for targeted groups and writing off outstanding study loans.

But a major blow to the PH came from BMI Research – an independent and separate research entity of Fitch Ratings, one of the big three international rating agencies – which declared that as far as the economy is concerned, the PH's figures simply do not add up, and if the pledges are not costed properly with a clear alternative revenue generating and tax consolidation strategy, then the PH's plans could "be detrimental" to the Malaysian economy and weaken the country's business environment making it less business friendly.

The BN's own manifesto promising a "Greater Malaysia" has a whopping 364 pledges, some of which are populist but rightly inclusive, such as raising the minimum wage to 500 ringgits ($128) per month over the life of Parliament and aspiring toward a living wage policy. The challenge will be to deliver a large chunk of these pledges, always difficult for any ruling government.

Najib supporters are quietly confident that the BN will prevail, but some are wary of any residual fallout of the 1Malaysia Development Berhad (1MDB) affair – the government-run investment fund that lost millions due to alleged fraud and mismanagement. The fact that no one has been convicted of any wrongdoing to date has compounded perceptions especially of critics of Najib and the BN government.

Najib is keen to win a two-thirds majority, or 148 seats, which would be a vindication of many of his policies and the direction he is taking the country. Failing to reach that target would not be the end of the world, but any figure less than the 133 seats gained in the 2013 election may put his premiership under pressure.

After all, his predecessor Prime Minister Abdullah Badawi resigned after the BN lost its two-thirds majority in the 2008 elections even though it had the overwhelming majority of 140 seats, paving way for Najib to take over in 2009.

Voter turnout in Malaysian elections are healthy, registering 76 percent in 2008 and 86 percent in 2013 and projected to be around 85 percent in 2018. The $64 million question remains whether the BN will pass that two-thirds majority or will have to be contented with a simple majority. After all, it only needs 112 seats to get that majority, and we will see if they can shortly.