Israel: The state of hasbara 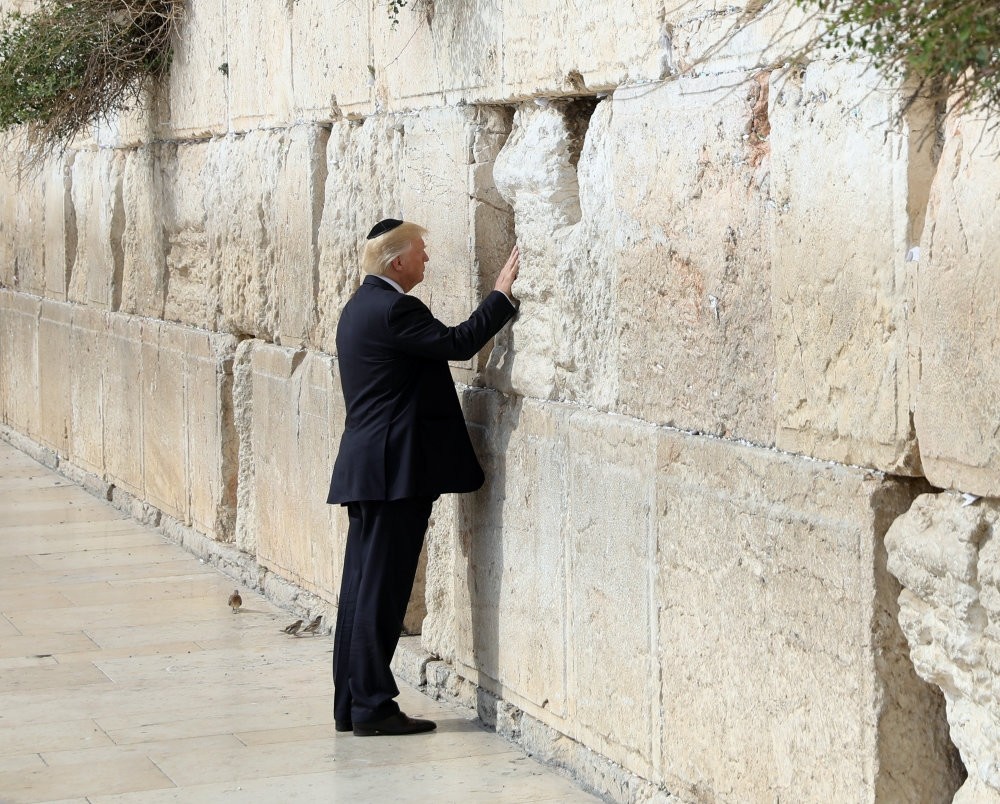 U.S. President Donald Trump touches the Western Wall, Judaism's holiest prayer site, in Jerusalem's Old City. Many protests against Trump's decision to move his country's embassy to Jerusalem were portrayed as anti-Semitic.
by Fadi Zatari May 09, 2018 12:00 am

Habara is a tool to disseminate Zionist propaganda, and the term helps portray Israel as a victim while serving as an instrument to be used against Palestinians

In classical Hebrew, "hasbara" simply means "explaining." However, in modern Hebrew and in light of Israeli policy and diplomacy, hasbara is a much more complicated and loaded term. The modern meaning of hasbara indicates not only fabrications, half-truths, and downright lies, but also the framework that selectively disseminates Zionist propaganda as "facts" on behalf of the Israeli state, including its lobbies and their supporters around the world — especially in the United States and Europe. This propaganda effort has been coordinated through several Israeli minsters to convince people to accept the Zionist narrative on Palestine.

From a Zionist perspective, every critic of Israeli policy — such as those who highlight Israeli violations of Palestinian human rights and the illegal colonization of Palestinians lands — is classified as anti-Semitic. Moreover, the notion of a "threat" is a very crucial concept to understanding the politics and methods Israel uses to justify its actions — in practice as well as in theory. Simply, the idea of a "threat" is an unethical instrument that Israel endlessly uses to perform it racist policies against the Palestinians. The framework — in which Israel produces, arranges, and regulates its Zionist propaganda — is known in Hebrew as hasbara. Thus, hasbara contains many ideas such as "being threatened," and "playing victim," not only to place pressure on Western countries regarding the necessity of protecting the state of Israel unconditionally, but also to justify its unethical policies against Palestinians.

Israel lost its image worldwide after the second intifada in 2000, the war on Lebanon in 2006 and the last three aggressions on the Gaza Strip that killed thousands of civilians. Hasbara has played different roles in trying to rectify the degradation of Israel's reputation. One of the main aims of hasbara is to repair the image of Israel and to recover its ugly image of colonization, racism and apartheid policies. To accomplish this, hasbara reverses the actual story, namely, by claiming Israel is a lonely democracy in the Middle East and that it is the only country that respects Western values, such as human rights and freedom. Furthermore, hasbara tries to control and manipulate political discourse. For example, instead of focusing on primary issues, such as illegal settlements, hasbara attempts to divert attention to insignificant issues like the fact that Palestinian schools allegedly "teach children to hate Jews."

For instance, last December many protests took place in Germany in reaction to U.S. President Donald Trump's recognition of Jerusalem as the capital of Israel. During the protests, some Israeli flags were burned in Berlin. Consequently, the media discourse moved from the issue of supporting Palestinians rights and protesting against the injustice of the U.S. decision, to the rise of anti-Semitism in Germany, whether or not it is legal to burn foreign flags and whether foreigners in German should be expelled for doing so.Accordingly, hasbara seeks to "positively" influence political discourse in Israel's favor, particularly in Western countries. To that effect, hasbara tries to spread a negative image not only of the Palestinian people and Arabs, but of Muslims in general. To accomplish this double mission, hasbara targets diplomats, politicians and the political and economic elite as well as the public through mass media. This is also accomplished through institutes and government agencies as well as in universities, nongovernmental organizations (NGO), research centers and lobbies. Individuals such as bloggers and journalists, who sell a beautiful image of Israel, also contribute to hasbara. Notably, Israel offers hasbara fellowships, grants, scholarships, social media internships and even salaries for students to enable them to become advocates of Israel.

Hasbara also seeks to have an impact through different digital and mobile applications, which offer supporters of Israel the tools and information needed to spread pro-Israel propaganda through their online platforms. These applications promote Israeli tourism, for example, to show how Israel is a friendly and beautiful nation and not an occupying force. These applications also tell users how to write positively about Israel. For instance the "Hasbara Handbook: Promoting Israel on Campus" is a brochure for university students who wish to be active on behalf of Israel. This brochure describes how to argue for the sake of Israel by emphasizing that "Israel is a democracy" and "Israel wants peace." It asks users to "focus on some of the most positive features of Israel and attacking the Palestinian leadership in an effort to allow people to view Israel favorably in comparison." This demonstrates that the state of Israel is a state built on propaganda, which is not only trying to repair its bad image, but also seeking to distort the image and suffering of the Palestinian people.

Hasbara presents Israel as a unique, strong and undefeated country in the Middle East that cannot be challenged by any power in the region. However in 2005, the Palestinian-led movement "Boycott, Divestment, Sanctions," also known as the BDS, was established as a nonviolent force of resistance against Israeli dominance and propaganda. Since then, Israel has been suffering the consequences of its hasbara policy. As a way to counter the BDS, hasbara attempts to associate it with anti-Semitism. Thus, hasbara wants to change and reduce the popularity of the BDS movement by using the term "anti-Semitic" as an instrument. Nevertheless, the more money and effort Israel spends on hasbara to counter the BDS movement, the more the BDS makes advances and grows.