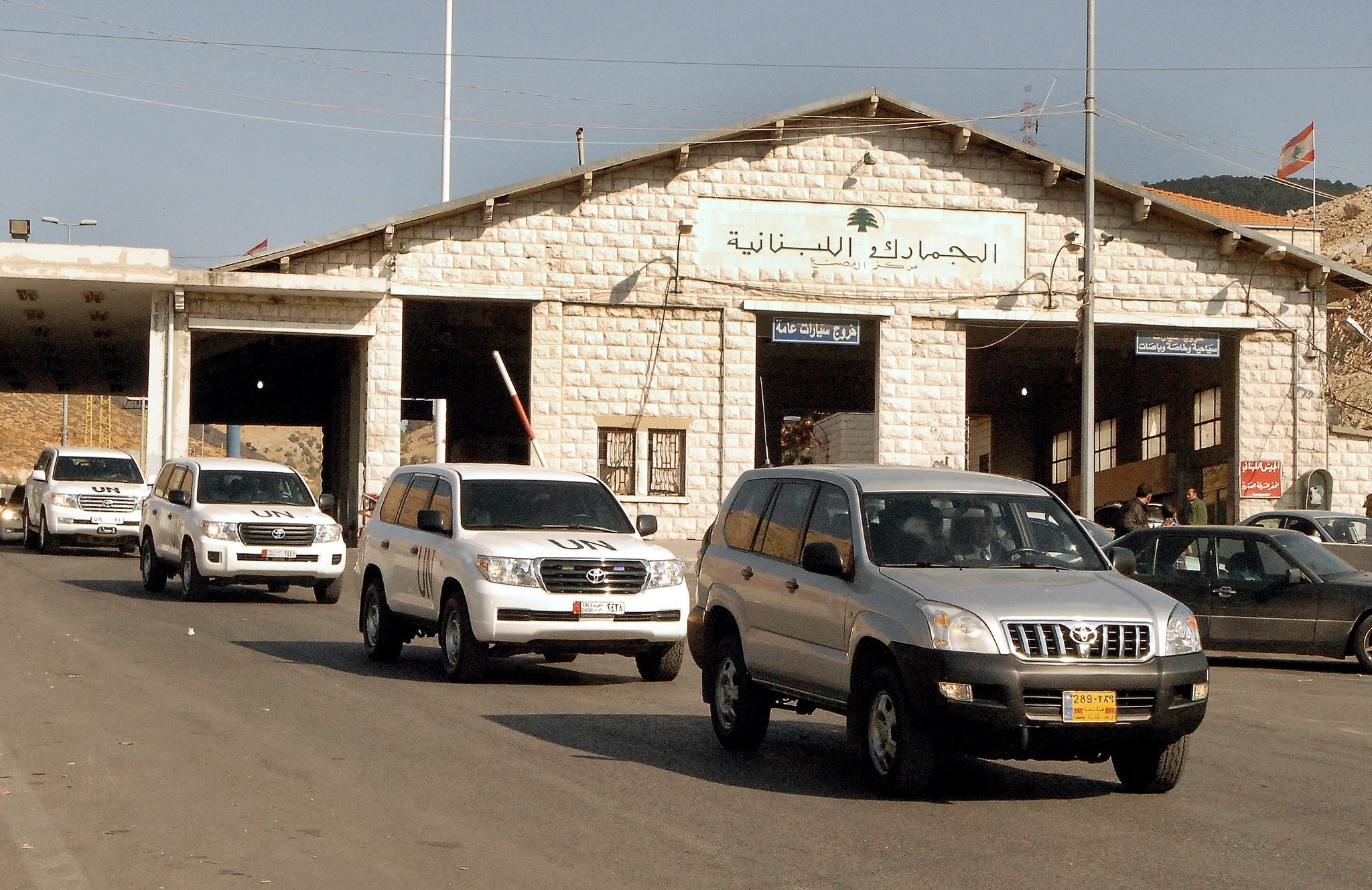 A convoy of U.N. vehicles carrying the U.N. team of inspectors investigating the use of chemical weapons in Syria crossing into Lebanon from Syria, Sept. 30, 2013.
by Bashdar Pusho Ismaeel
May 10, 2018 12:00 am

Whether the reason is Obama's inaction over his famous red lines, Trump's showpiece intervention or Russia's backing of Assad in the international arena, the Syrian people are not getting the peace that they deserve any time soon

If the U.S., U.K. and France's retaliatory airstrike on April 21, two weeks after alleged chemical attacks by Bashar Assad's forces in Douma, was to deter the Syrian regime or force a change of mood, then it looks like a failure. Regime forces are relentlessly continuing their fierce quest to drive out opposition forces in remaining enclaves around Damascus.

As a team from the Organization for the Prohibition of Chemical Weapons (OPCW) finally arrived in Douma on April 17 to investigate the alleged chemical attacks, the U.S. and its allies had long made up their minds and attributed blame to the regime.

While the missile strikes were greater in number than those ordered by Washington in April 2017, when Western powers were again adamant that only Assad could be responsible for the fatal chemical attack in Khan Sheikoun, the U.S.-led response this time around seemed more sensitive to avoid any action that would incense Russia, or worse still, hit Russian personnel.

This view seems to be confirmed by Russian Foreign Minister Sergey Lavrov, who stated, "We told them where our red lines were, including the geographical red lines... The results have shown that they haven't crossed those lines."

Trump hailed the operation, predominantly aimed at destroying Assad's chemical weapons development capability, as "mission accomplished," however, this is where the ironies are hard to ignore. Five years after Assad brazenly crossed then U.S. President Barack Obama's infamous red line on chemical attacks, the fact that U.S. is still reacting to such scenarios says much about the flawed deal in 2013 between Washington and Moscow that was supposed to see Syria dispose of all of its chemical weapon stockpiles in exchange for halting military action.

Yet, just days after Assad's deadly attack in Ghouta, Obama quickly backtracked and even stated in September 2013, "I didn't set a red line. The world set a red line."

Fast forward to 2018, Assad is not only still in power, but also very much in the ascendency with significant support from his Russian and Iranian allies. Trump was critical of Obama's failure to enforce redlines, and vowed that when he set a redline he meant it.

This pledge placed Trump in a difficult corner after the most recent chemical attack by Assad, but U.S has seemingly little appetite for regime change or any greater military campaign that sees it sucked in deeper into the Syrian war or thrust into a direct showdown with Moscow.

The real time for action that would have greatly swayed the Syrian war and resulted in a much more rapid settlement of the conflict was in 2013. Obama greatly misjudged his shifting red lines and the effects of the so-called deal that would remove Assad's chemical weapon capability.

At the time, Obama was quick to hail the deal that averted the need for military intervention. Meanwhile, former U.S. Secretary of State John Kerry was equally upbeat, stating in 2014, "With respect to Syria, we struck a deal where we got 100 percent of the chemical weapons out."

Now, any outcome from the OPCW, who cannot attribute blame but only confirm chemical weapons use, will not change the calculus on the ground. The United Nations Security Council is in a state of paralysis from reaching any meaningful diplomatic agreement, let alone agreeing on real action, due to Russia's ardent support for Assad.

The OPCW investigation into the April 2017 attacks had little effect on dissuading Assad. Ahead of the OPCW team's delayed arrival, there was fierce rhetoric between the U.S. and Russia over alleged cover-ups at the site of the attacks.

Heather Nauert, spokeswoman for the U.S. State Department, stated, "Russian officials have worked with the Syrian regime, we believe, to sanitize the locations of the suspected attacks and remove incriminating evidence of chemical weapons use."

However, Russia and Syria remained resolute that the opposition staged the attacks with the support of the West. Either way, Russia remains in the driver's seat in Syria and looks to prop up the regime and its strategic interests in the eastern Mediterranean at any cost. On the other hand, U.S. policy in Syria seems disjointed and unpredictable.

Just weeks ago, Trump vowed that U.S. forces would be withdrawn soon; then subsequent statements from U.S. officials backtracked and indicated a more long-term stay in Syria.

As for Assad, with the firepower of his allies at hand, he will quickly mop up the remaining opposition strongholds around Damascus, Homs, and beyond. Unfortunately, for the long-suffering Syrian population, there seems to be no short-term end in sight to the brutal war that has devastated millions of lives.