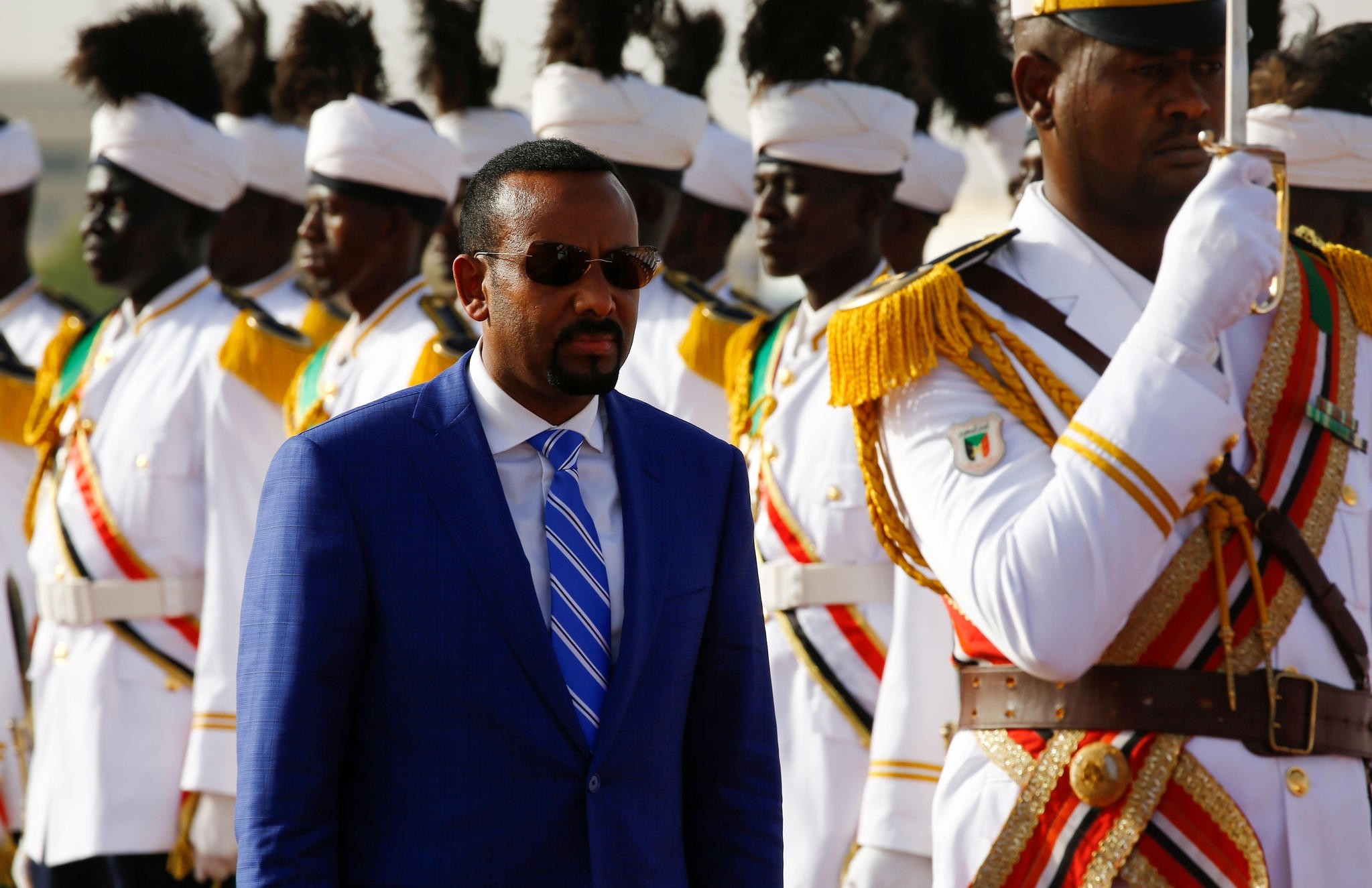 Ethiopian Prime Minister Abiy Ahmed reviews the honour guard following his arrival in Khartoum for an official visit to Sudan on May 2, 2018.
by Abdinor Hassan Dahir May 17, 2018 12:00 am

Dr. Abiy Ahmed, Ethiopia's new prime minister, was in Nairobi, Kenya, earlier this month to hold talks with Kenyan President Uhuru Kenyatta. According to media reports, there were several items on the 42-year-old Ethiopian leader's official agenda: Finding a permanent solution to the recurrent interethnic conflict between members of the Dagodia clan, who are Kenyan-Somali pastoralists, and Ethiopia's Boran Orama community in Moyale, a commercial center split between the two countries. At the same time, Dr. Ahmed hoped to promote deeper economic integration between Ethiopia and Kenya, along with the wider Horn of Africa. The true motivation behind Addis Ababa's recent diplomatic efforts in the region, however, is to stop the imminent loss of its dominant role.

Since the 1990s, Ethiopia played a dominant role in the Horn of Africa thanks to its vast size, large population and robust economic growth. At a time when many countries in the region were crippled by political unrest and security threats, i.e. violent conflicts, terrorism and widespread piracy in Sudan, South Sudan and Somalia, Addis Ababa – an economic powerhouse with significant political clout – was an oasis of stability.

During this period, Ethiopia, home to the African Union's headquarters, assumed the leadership of the Intergovernmental Authority on Development, or IGAD, an eight-country trade bloc in Africa. At the same time, Addis Ababa (albeit unsuccessfully) launched a campaign to host the United States Africa Command, also known as AFRICOM, which eventually settled in Stuttgart, Germany, amid fierce resistance by key African nations, including Nigeria, South Africa and Libya.

In addition to those efforts, the Ethiopian government took a series of military steps to promote regional peace and stability. In late 2006, Ethiopia's army invaded Somalia to remove from power the Islamic Courts Union, which ruled most of the country at the time, and installed the Transitional Federal Government in Mogadishu. The Ethiopian military remains active in the region today, as Addis Ababa contributes troops and resources to the African Union's peacekeeping mission in Somalia, AMISOM, which fights against the Al-Shabab militants – along with several U.N. peacekeeping missions including the U.N.-African Union Hybrid Mission to Darfur (UNAMID), the U.N. Mission in Sudan (UNMIS), the U.N. Mission in South Sudan (UNMISS) and the U.N. Interim Security Force for Abyei (UNISFA).

The Horn of Africa rose to greater prominence in recent years. When the anti-Houthi coalition was formed under Saudi Arabia's leadership in March 2014, the need for ports and military facilities across the Red Sea and the Gulf of Aden became clear to effectively carry out operations in Yemen. While Somalia and Djibouti opened their airspace and territorial waters to coalition forces, Sudan and Eritrea contributed personnel and military bases.

More recently, Saudi Arabia, the United Arab Emirates (UAE), Bahrain and Egypt severed their ties with Qatar, a member of the Gulf Cooperation Council (GCC). The countries in question stated that this decision was taken in response to Doha's close relations with Iran and its supposed support to "terrorist" organizations in the Middle East and North Africa. In the wake of this crisis, the two sides engaged in fierce competition to find allies around the world, especially in the Horn of Africa. Although Sudan and Somalia maintained their neutrality and came out in support of Kuwait's mediation efforts, Djibouti and Eritrea sided with Qatar's adversaries, which resulted in Doha's withdrawal of peacekeeping forces from the disputed territories between the two countries.

First, Eritrea, Ethiopia's most notable rival, is recovering from years of political and economic isolation. In the wake of the conflict in Yemen, the UAE established its largest overseas military base at Assab Port, which has been used by coalition warplanes to carry out operations in Yemen. In return, Asmara was promised investment from the Gulf. The idea that Eritrea could break its decades-long isolation is a nightmare for Addis Ababa.

Secondly, Egypt, which has been at odds with Ethiopia over the construction of the Grand Renaissance Dam, which Addis Ababa has been building on the Nile to produce electricity. The Egyptians are concerned that the project will restrict the amount of water available to them. Although Cairo currently lacks any significant political or economic influence in the Horn of Africa, it hopes to use its partnership with Saudi Arabia and the UAE as leverage against Ethiopia.

Finally, the Gulf is the birthplace of Wahhabism, a particularly intolerant brand of political Islam that threatens to uproot traditional and more moderate religious practices in East Africa. It is noteworthy that radical insurgents, including Al-Shabab and the now-defunct Al-Ittihad al-Islami, which subscribe to that ideology, targeted Ethiopian interests in the past. Keeping in mind that Addis Ababa contributed troops to the fight against those militant groups, it fears that the growing influence of Gulf states in the region could have a destabilizing and radicalizing effect.

Ethiopia has been slow to respond to the involvement of certain Gulf countries in the Horn of Africa primarily due to domestic instability, including interethnic tensions and widespread protests that resulted in Hailemariam Desalegn's removal from power. Under Dr. Abiy Ahmed, Addis Ababa pursues a two-step policy to maintain its dominant role in the region.

First, the country launched an all-out offensive to control a significant share of major ports along the Red Sea coast and the Indian Ocean. In March, Ethiopians acquired a 30-percent share of Berbera Port in Somaliland, an autonomous region of Somalia. Moreover, Dr. Ahmed reached an agreement with Djibouti's Ismail Omar Guelleh to partly control the Port of Doraleh, which was previously owned by the Dubai-based port operator DP World, an obvious attempt to prevent the UAE from establishing a foothold in Djibouti. The Ethiopian prime minister also held talks with Sudanese President Omar Al-Bashir to claim an unspecified share of Port Sudan. Finally, Ethiopia and Kenya recently signed an agreement, under which Addis Ababa will invest in the Kenyan port of Lamu on the Indian Ocean.

At the same time, Ethiopia has been making diplomatic efforts to encourage deeper economic integration across the region. Abiy Ahmed, upon concluding an agreement with Djibouti to share ports, notably said that the two country should swap state-owned enterprises without either side claiming ownership. While Ethiopia connected with Kenya via selling energy, and Djibouti through roads, railways and electricity, Addis Ababa plans to encourage integration with Uganda, Sudan, South Sudan and other East African countries through energy and infrastructural projects, such as LAPSSET Corridor Program - the region's largest and most ambitious infrastructure project bringing together several countries.

In light of the most recent developments, it is possible to conclude that Ethiopia has four main goals: It wants Eritrea to remain in political and economic isolation. It seeks to limit Egypt's contacts with other countries in the region. It hopes to prevent any spillover of the Qatar crisis into the Horn of Africa. Finally, Addis Ababa takes all of those steps to maintain its dominance and hegemony in the region.