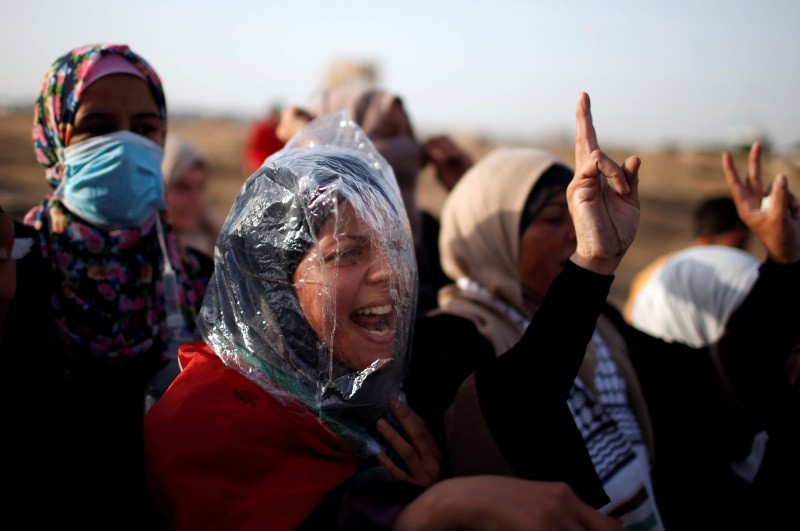 A female demonstrator wearing a plastic bag chants slogans during a protest where Palestinians demand the right to return to their homeland, at the Gaza Strip, east of Gaza City, May 18.
by Quraysha Ismail Sooliman
May 21, 2018 12:00 am

Palestinians were protesting Israel's occupation of their lands before Hamas, just like they will continue to do so regardless of any other formation, as it is their basic right to live free from apartheid and persecution

On May 8, Fadi Zatari's article "Israel: The State of Hasbara" was published in Daily Sabah. I think it fitting that this reality be demonstrated after the Gazan killings. Israeli Ambassador to South Africa Lior Keinan wrote a piece, "Hamas had opportunity to turn Gaza into heaven," which was published in a local newspaper a day after South Africa withdrew its ambassador to Israel following the Gaza killings. Hasbara, as explained by Zatari, is a tool to disseminate Zionist propaganda, portraying Israel as a victim "being threatened," while justifying its racist, apartheid policies against the Palestinians. It works to deflect from the violence of the occupation and Israel's persistent harm on the Palestinian people.

Israel is a settler colony, like the U.S., Canada, Australia, and New Zealand. It came into existence by ethnically cleansing the territories of the indigenous Palestinian peoples. The U.S. and these Western states' support for Israel reflects a great fear – that of the white man's guilt. If any of these states reprimand Israel and call it to account for its crimes against humanity, its human right's violations and criminal actions against the occupied, oppressed Palestinian peoples, well then, they have to look into their own histories and call themselves to account for the mass killings of the indigenous Indians and Aboriginals, as well. This cannot be – just as the colonizing nations refuse to hold themselves to account for their actions in the colonies they plundered. A case in point is Germany's refusal to acknowledge the genocide it perpetrated in Namibia and the U.K.'s refusal to return the stolen possessions of Ethiopia and India.

According to the Human Sciences Research Council (HSRC) report of May 2009, the Apartheid Convention and Rome Statute that identified and described the prohibition of apartheid, it is clear that Israel is guilty of introducing a system of apartheid in the Occupied Palestinian Territories (OPT) in accordance with Article 2 of the Apartheid Convention. There is de jure apartheid on the ground. Apartheid practices refer to inhuman acts perpetrated to establish and maintain domination of Israeli Jews over Palestinians through an institutionalized regime of systematic oppression. Just as in apartheid South Africa, it includes excessive state violence and state terrorism against the population being subjugated. Thus, for Keinan, to state that Gaza could be a heaven under these circumstances is a lie – an attempt to transfer the effect of the Israeli aggression and killings onto Hamas. This masks the fact that the Palestinians have the right to resist the occupation, including the right to use force. This is a legitimate right of occupied and colonized people established under international law. Thus, there can never be a "heaven" in Gaza, while Israel strangles Gaza's land exits, sea and space and subjects Gazans to a vicious siege that is debilitating the population. Gazans are trapped in this small enclave and Keinan's comment of a "heaven" typically refers to Israeli arrogance – telling Gazans how they should make themselves comfortable in their prison, how they must decorate the inside of their prison, without ever daring to demand freedom or equality.

According to Keinan, Hamas is responsible for "forcing" Palestinians to come to the "border with Israel" to hurt "Israeli citizens." Note: this implies that Palestinians do not have their own agency, dehumanizing them further. First, Gaza does not have a border; it is not a sovereign state. What is being referred to here are the armistice lines from 1949. Furthermore, Israel has not identified what its borders are because this allows Israel to keep stealing Palestine land. There were also no "clashes" between Palestinians and Israelis because Palestinians gathered in a buffer zone, far from where any Israeli citizens or military installations are located.

Second, the Palestinians have made it clear that just like the collaboration of Palestinian civil society that established and called for Boycott, Divestment and Sanctions (BDS) against the apartheid state of Israel, their mobilization has been voluntary, non-partisan support for the commemoration of the Nakba – 70 years of occupation, dispossession and expulsion from their own land – and represents the Palestinian call for an end to the siege on Gaza, an end to the occupation of Palestine and the right of Palestinian refugees to return to their own homes. It is a protest against land theft, dispossession and genocide.

Third, Palestinians have been protesting for 70 years against the violent occupation of the apartheid state of Israel. Hamas was established only in 1987, thus one must ask why were Palestinians protesting before that? Also, Hamas is not in all the territories where there are protests. So why are these particular Palestinians protesting? Should they simply bow their heads and allow themselves to be subjugated and obliterated on a daily basis forever? Is the right to protest, to resist occupation, a right reserved only for a particular kind of people? Certainly not for Palestinians or black people? Palestinians have recognized Israel's right to exist since 1988, and agreed to this again in 1993. The only entity that does not want peace or a two-state solution is Israel itself. Netanyahu has repeatedly said that there will never be a two-state solution. Significantly, Hamas has endorsed a two-state solution, and it has agreed to enter into negotiations with Israel. There is empirical evidence for this. Palestinians are continuously told that it is their fault that they cannot be free. They are told that they must stop demanding equality and freedom.

The Gaza non-violent protests and the mobilization for the right to return is not about Hamas or Hamas' terror, it is about a people protesting their imprisonment under occupation and their vilification and dehumanization by an apartheid state. It is a non-violent call for the right to not only live, but the right to exist on their own terms. For this call, more than 55 peacefully demonstrating Gazans were murdered and more than 2,000 civilians have been injured. This affirmed the reality that black people, Palestinians and Muslims only have "selective" rights – where the white supremacists decide when and how it will be conferred, if ever.

PhD Candidate, Faculty of Law at the University of Pretoria