Why and how Turkey is going to the polls 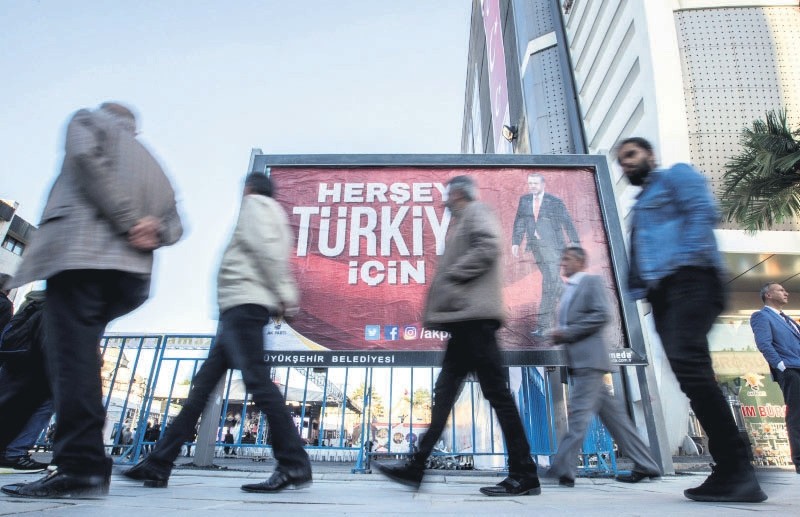 People walk in front of a billboard that reads ,Everything for Turkey, in Van province, eastern Turkey, May 16.
by Markar Esayan May 22, 2018 12:00 am

Hence, we will have a much more active Parliament and a rigid separation of powers. Parties and groups, which were conducting the "no" campaign during the referendum process, tried to persuade voters with irrelevant slogans such as, "Parliament is discarded."

Nowadays, however, they argue for obtaining absolute parliamentary majority. Furthermore, they imply that President Recep Tayyip Erdoğan will win the elections in the first round and talk about how critical it is to obtain a majority in Parliament. Thus, it becomes clear to citizens that all the claims of the "no" camp during the referendum process were groundless.

In fact, the previous system did not fully fit the definition of a classical parliamentary system. Through antidemocratic constitutions that had been made following military coups (1961, 1982), several institutions were created and imposed on elected governments. And these institutions were given an exclusive status and insulated from popular will. The gravest of all was that the putschists fashioned the office of presidency, which was to be elected through parliamentary vote, as the uppermost instrument of tutelage.

The Parliament was regularly put under pressure and, with the help of the Republican People's Party (CHP), presidents were always chosen from among pro-tutelage candidates. Figures like the late president Turgut Özal, who had somehow managed to break this siege, were neutralized through character assassination.

They had become quite adept at this and gained self-confidence. For this reason, they had strengthened the office of presidency in order to better use it as a stick to cow governments and Parliament into submission. While transferring a good part of executive powers to the president, they had also made it immune from prosecution.

Yes, it was impossible to try the president during his lifetime for any reason within the previous government system that we have just discarded. It was customary for the putschist general to become president after "free" elections. That judicial exemption also prevented the prosecution of coup crimes.

A battleground between popular forces and the establishment

In order to prevent the office of presidency from being assumed by a popular candidate, either the actor was forced to compromise, or a coup was launched when the candidate refused to comply. Indeed, the main justification for the Sept. 12, 1980 coup was the inconclusive presidential election prior to it.

By 1980, the term of the then-president Fahri Korutürk, who had been complicit in previous coups, ended. A total of 115 rounds of elections were held. Attempts to elect a president always failed. The last round was held on Sept. 11, 1980. Deputies left Parliament intending to "elect the president tomorrow," but Gen. Kenan Evren launched a coup with his team at 4 a.m. the next morning. Let's note that Time magazine praised General Evren and put him on its cover.

A similar crisis broke out in 2007, too. It was time for presidential elections as the term of the then-president Ahmet Necdet Sezer, who was known for his apparent opposition to conservative parties, came to an end. Since the Justice and Development Party (AK Party) had a majority in Parliament, it could get its candidate elected in the third round. But a serious crisis was unleashed in the country.

"Secularist" powers were alarmed, while so-called mass demonstrations were being staged with the attendance plainclothes soldiers. Higher judiciary bodies were issuing threatening statements one after another, stating that a candidate with a hijab-wearing wife cannot be the president of the country. However, a constitutionally elected government just wanted to exercise a right in compliance with the explicit provisions of the Constitution. It was blatant fascism. The media ran provocative news.

First, the Constitutional Court stepped in by making an unconstitutional claim. According to that, a quorum of 367 was required at each vote at the plenary session. In other words, the AK Party was effectively blocked from getting its candidate elected during the third and fourth rounds with its own votes. Leaders of smaller parties received menacing phone calls from "above," instructing them to not attend the plenary session. The CHP was already acting in concert with them. Even further, some deputies who insisted on attending the plenary session were locked in their rooms.

The CHP took the first round to the Constitutional Court. It was all a frame-up. The court canceled the first round. As the AK Party refused to backtrack, this time an "e-memorandum" was issued by the military at midnight on April 27, 2007. That was an explicit coup threat. But neither Erdoğan nor the AK Party stepped back. The memorandum met strong reaction. Snap elections were called by stressing that "there would be no retreat in the face of antidemocratic forces."

The AK Party increased its vote share from 34 to 47 percent in the ensuing snap elections on July 22, 2007 and became the voice of the people against tutelage. After failing to enter Parliament in 2002, the Nationalist Movement Party (MHP) managed to pass the election threshold this time. Though it nominated its own candidate in the presidential election, the MHP attended the plenary session and the 11th president was thus elected. AK Party leader Erdoğan demonstrated great maturity by declaring, "My brother Abdullah Gül is our candidate." Unfortunately, he couldn't receive the same loyalty from Gül.

After the president was elected, the focus was on what to do in order to prevent a similar crisis in the future. Since popularly elected deputies used to be pressured and intimidated, leading to unconstitutional moves, presidents should be elected directly by people. A constitutional amendment designed for this purpose was approved by 70 percent of voters in a referendum on Oct. 21, 2007.

As the 11th president was already elected, the new procedure would be implemented in 2014, after Gül's term ended. So, there was little debate on how this amendment affected the whole system. However, the approved amendment had significant consequences.

The president, to whom the putschists had transferred some powers of the executive and whom they made immune from judicial oversight, would be elected by the people now. Thus, there would be two popularly elected actors, who would share the executive power almost equally. Since presidents would be elected by 50+1 percent of the vote, barring some exceptions they would always be stronger due to getting more votes than the prime minister's party. Moreover, the president was free from accountability and political risk.

The system was at a crossroads in its evolutionary process. The existing system was like a time bomb. Even if the party that got its candidate elected as president won the majority of seats in Parliament to form the government, president and prime minister might be at odds. If the president and prime minister were from different parties, then chaos would emerge at any moment. That double-headedness would not only make the effective governing of the country impossible but would also put democracy at risk since centers of tutelage were still active.The political justification for the presidential government system, which was approved in the April 16 referendum, stemmed from that evolutionary process. Since the system was closer to a presidential system and due to the inherent problems of the parliamentary system, the presidential government system was adopted. Besides, this proposal was presented to people by the AK Party not unilaterally but together with the MHP.

The new system envisaged a rigid separation of the executive and the legislature, with the judiciary being subject to the national will. The president is accountable to Parliament and is subject to prosecution. If it deems necessary, Parliament can take the president to elections, repeal his or her decrees, and even refer him or her to the Supreme State Council for trial by a four-fifths majority. Deputies will make laws directly now and stop being weak actors who just vote for bills proposed by parties or bureaucrats.

In fact, Turkey has achieved an enormous administrative revolution on April 16. The nationwide threshold was eliminated through allowing pre-election alliances. Indeed, two big alliances for the upcoming elections encompass almost all parties. As the Peoples' Democratic Party (HDP) has an ambiguous stance on terrorism, the CHP couldn't include it int the alliance though it wanted that. It's not because of the system itself, but of these parties' specific problems.

Turkey is heading for democratic elections following processes that saw all these critical developments. It is crucial in a democratic culture that everyone respects this process and accepts the outcome of the elections. Citizens of the Republic of Turkey have no problem with that. However, those watching Turkey from outside with prejudices and misinformation had better be careful.