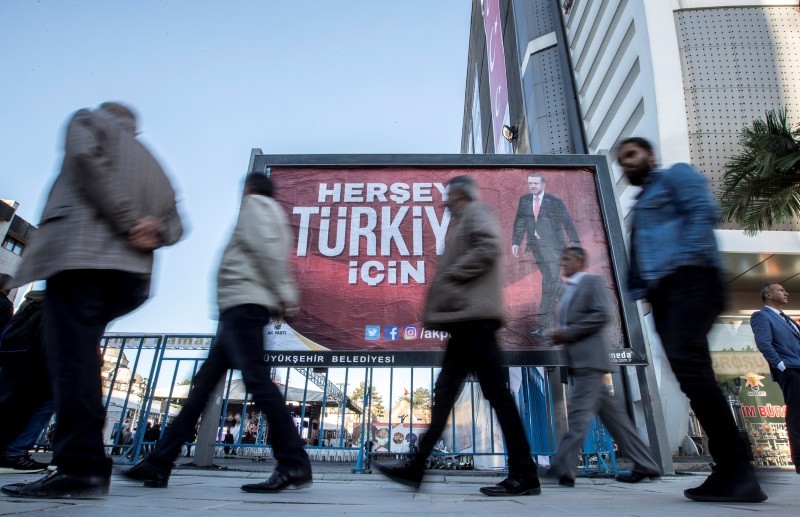 The AK Party government's achievements in fighting against PKK terrorism both inside and outside of Turkey has made very important progress, including the normalization process of the Kurdish issue in the political sphere

Unlike before, the Kurdish question is not a priority item on Turkey's agenda at the moment nor is it a major part of the discussions ahead of the presidential and parliamentary elections on June 24. Almost all the parties running in the elections include clauses on the Kurdish issue in their campaigns, but those clauses do not constitute the most critical parts of their election declarations. One important reason behind this change is the Justice and Development Party (AK Party)-led government's success against the PKK terrorist group in and outside Turkey, especially in Iraq and Syria in the last two years.Remarkable diplomatic efforts complemented the armed struggle against the terror networks that threatened Turkey. The PKK's capacity to attack Turkish security personnel and civilians has plummeted due to some successful efforts by the country's security forces. Success in the armed struggle against terrorism also had its effect in the political sphere. This is a vital sign of political normalization of the Kurdish issue in Turkey as well as the criminalization of those who promote and use violence for the "Kurdish cause."

The political endgame of the Kurdish question can no longer be handled within the territories of Turkey due to the developments in northern Syria and northern Iraq. However, Turkey's genuine efforts to handle the Kurdish issue may constitute a notable example and model for the rest. The incumbent AK Party aims for the normalization of the Kurdish question by enabling equal citizenship rights for the Kurds and struggling against the sources of extremism within a comprehensive agenda.

Turkey's Kurdish question is no longer being discussed under the framework of identity politics except for the Peoples' Democratic Party (HDP), which is an ideological affiliate of the PKK. The language of identity politics is abandoned and social, economic and political normalization in the region is emphasized as the vision of the AK Party and its People's Alliance (Cumhur İttifakı), with the Nationalist Movement Party (MHP) and the Great Unity Party (BBP).Some AK Party strategists were concerned that the formation of the People's Alliance with two conservative nationalist parties may negatively affect its support among the Kurds.

Despite being a relevant concern, it has been proven that competing with the HDP for the Kurdish votes over the discourses of identity politics did not contribute anything for the AK Party. Indeed, this competition over who represents the Kurdish identity and Kurdish political rights best, over the identitarian discourse has worked better for the HDP in the last decade. The AK Party made remarkable legal and political reforms for the improvement of the cultural and political rights of Kurds. AK party governments took enormous political risks to improve the political and cultural rights of the Kurds against the bureaucratic establishment in the last decade and a half. It even endorsed the direct negotiations with the imprisoned leader of the PKK, Abdullah Öcalan, during the Resolution Process (2013-2015). All these efforts towards peace were wrongly interpreted as weakness and abused by the PKK and the HDP.

The PKK and its propaganda machine's poisonous ethno-nationalist discourse, which promoted the extremism constituted the biggest obstacle to peace and reconciliation. The PKK constituted the most significant obstacle against the normalization of the Kurdish issue and benefited from the discussion of the issue within the framework of identity politics. The AK Party, ahead of the June 24 elections, abandoned the identity politics discourse and emphasized political normalization, equal citizenship rights for the Kurds as well as social and economic development in the regions where many of Turkey's Kurdish citizens live.

This preference does not mean the denial of the Kurdish identity or avoidance of the cultural rights for the Kurds. When the PKK and its terror campaign, the most significant obstacles to the achievement of those rights, comes to an end the normalization in the regions will accelerate. People living in the eastern and southeastern provinces of Turkey have experienced this transformation in the last two years. AK Party's normalization efforts for handling the Kurdish issue is the most realist and most practical option because the potential oppositions of a deal, the MHP and BBP, are also the part of the People's Alliance.

It would be difficult to convince those two actors for a new comprehensive agenda to handle the Kurdish issue because of the failed resolution process, but it would at the same time be impossible to reach sustainable peace if the Turkish nationalists are excluded from a political deal.President Recep Tayyip Erdoğan's political leadership is a crucial element of keeping Turkey's conservative majority as part of the normalization of the Kurdish issue. The Kurdish issue will be one of Erdoğan's top priorities if he is elected again as the president in the June 24 elections. Turkey's achievements in the fight against the PKK in the last two years, AK Party's normalization agenda and the emergence of the People's Alliance under Erdoğan's leadership strengthens his position as the critical determinant of the peaceful handling of the Kurdish issue after the elections.