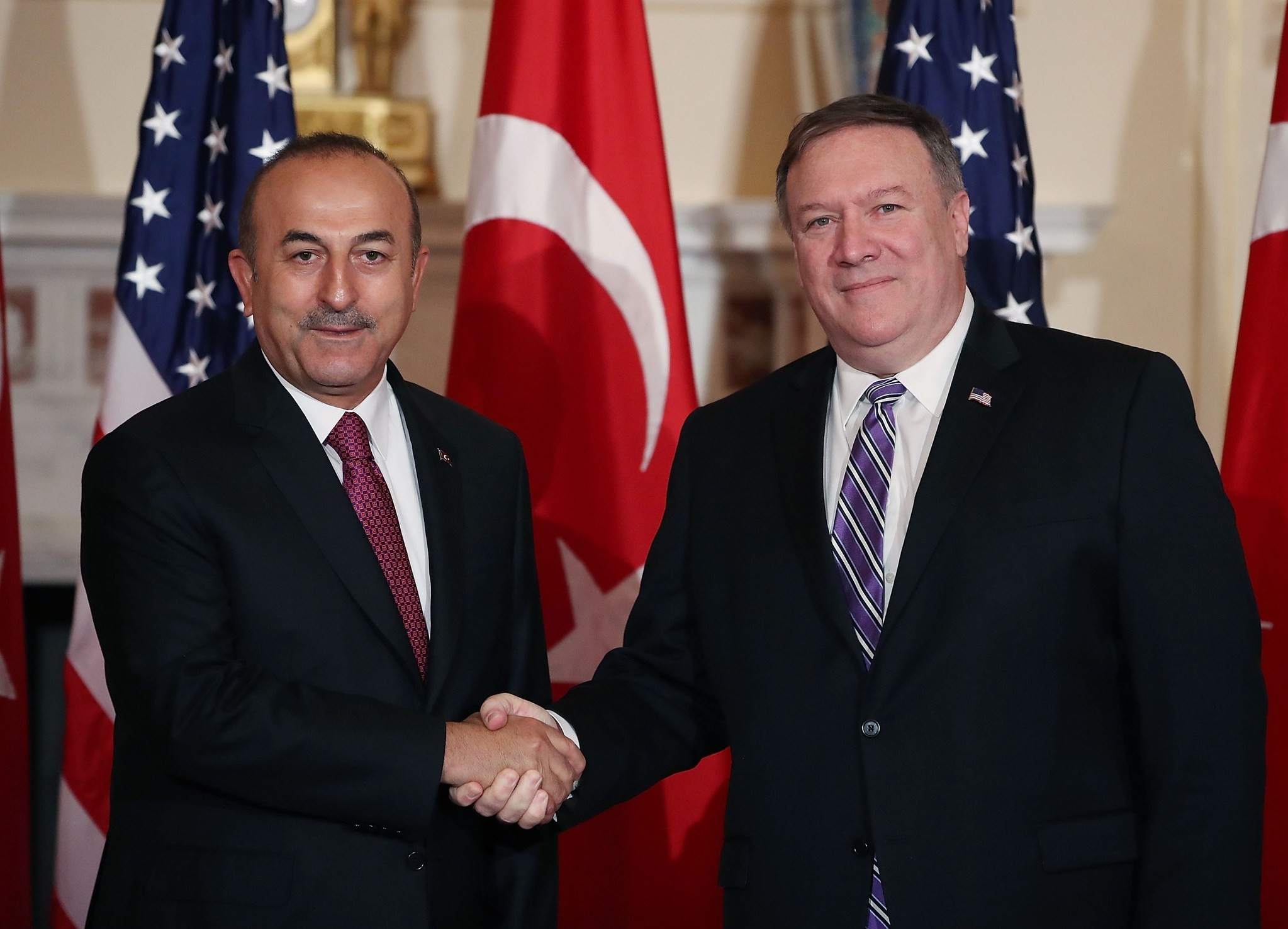 Resolving the issue of Manbij means much more than just one resolution for two strategic allies; instead it will be a start for some other critical discussions between Ankara and Washington

Foreign Minister Mevlüt Çavuşoğlu met with his American counterpart, former CIA chief and newly appointed U.S. Secretary of State Mike Pompeo, yesterday in Washington. Due to the time difference, the meeting did not end when these lines were written, but one thing is sure: This meeting will be geared toward finding a workable plan to see the Syrian city of Manbij return to local administrative control.

On their agenda will be a gauntlet of issues with far-reaching domestic and international impact. The decisions – or lack thereof – will definitely impact the national security and strategic interests of both countries. The elephant in the room, of course, is the NATO alliance, which both countries are members of.

For Turkey, the second-largest military force in NATO, the U.S. has not lived up to its commitments as a strategic ally. As a result, Turkey has sought ways to shore up the shortfalls in its national security and regional strategic interests. Strategic aerial defenses are critical to Turkey's national security thus it prompted to purchase the Russian S-400 air defense missile systems with full technological transfer rights. Of course, this was not an option until the U.S. and other NATO allies decided to pull their Patriot missile air defense systems out of Turkey in 2015.

Furthermore, U.S. politicians have suggested canceling the delivery of already-paid-for F-35 fifth-generation fighter jets to Turkey. Two jets are scheduled to be delivered on June 21. Test flights of those aircraft have already taken place in Fort Worth, Texas.

Çavuşoğlu suggested that if the U.S. Congress blocked the delivery, then Turkey would look elsewhere to fulfill its needs saying: "If I need such weapons, I will certainly procure my immediate needs from somewhere, but I do not think there will be a problem. In many resolutions that stipulate sanctions, Congress leaves the last word to the administration."

Another pressing item on the agenda will be the situation in northern Syria. Astana not being the venue of choice for the U.S. to hash out a political solution to the Syrian conflict, Washington will be the place to discuss the U.S. support for People's Protection Units (YPG) dominated Syrian Democratic Forces (SDF). An issue that Turkey has taken up with both the Barack Obama and Donald Trump administrations. There is now only a fleeting hope of American troops pulling out of Syria and leaving the SDF to fend for itself in places like Raqqa, where locals regularly protest the presence of the YPG-dominated SDF forces.

The Democratic Union Party (PYD), the PKK's Syrian branch, and its military affiliate the YPG – along with a number of other outfits including the Women's Protection Units (YPJ), Asayish and others – are known for their practice of forced conscription, even of children. They follow the teachings of the imprisoned terrorist leader Abdullah Öcalan, one of the founders of the PKK, and the separatist ideology adopted by some Kurdish people in Turkey, Iraq, Syria and Iran.

Despite all of this, the U.S. has insisted on focusing its Syrian support efforts on the SDF. All the while Turkish officials have voiced their objections to the U.S. policy based on the fact that the SDF has been infiltrated – and perhaps dominated – by the PKK elements that came to Syria from the Qandil Mountains. This has, in fact, been documented repeatedly with high-level U.S. officials pictured alongside wanted PKK terrorists inside Syria. Until this dystopian reality is reconciled, it will likely result in a continued strain in U.S.-Turkey relations.

The two officials are expected to look into these issues during the meeting to find a realistic plan to push forward with moving any PKK-affiliated elements out of Manbij and possibly further east across the Euphrates.

Protection of Gülenists a red line

One of the most sensitive issues will be that of the wanted terrorist Fethullah Gülen, who lives in a self-imposed exile in Pennsylvania, is accused of orchestrating the failed July 15, 2016 coup attempt which saw more than 260 Turkish people killed.

The U.S. has received a complete dossier with an official extradition request on the cleric. Theoretically, this should be a straightforward matter between two historic NATO allies. However, both the Obama and Trump administrations have yet to fulfill their duties – as Turkey perceives them – to extradite the wanted terrorist.

Naturally, this goes against the efforts to build confidence and trust between the parties.

Andrew Brunson, a pastor working in Turkey, was arrested in October 2017 for having ties to terror groups, including the Gülenist Terror Group (FETÖ) and the PKK. A tit-for-tat exchange may be a practical stepping stone for moving talks forward and repairing the ailing relationship. Note here that the recent push to block the delivery of the F-35 jets to Turkey is linked to U.S. political condemnation of the imprisonment of the American pastor.

Financially, Turkey has weathered tumultuous times recently. The Turkish lira recovered against the U.S. dollar when the central bank raised interest rates by three percent after losing 20 percent of its value this year. For their part, the U.S. made no qualms about sentencing Halkbank executive Hakan Atilla to 32 months in prison for his involvement in a scheme to curtail U.S. sanctions on Iran. Despite the partially state-owned bank cooperation throughout the investigation; the U.S. continues its anti-Iran offensive both on the ground via Israeli strikes on Islamic Revolutionary Guard Corps' (IRGC) positions in Syria and also aggressive diplomatic maneuvering.

In recent weeks, the Trump administration backed out of the Iranian nuclear deal and pulled out of the Joint Comprehensive Plan of Action (JCPOA). Furthermore, Trump went forward with moving the U.S. embassy to Jerusalem, offering Iran a free-for-all opportunity to galvanize Muslim sentiment against the move and further justify its presence in Syria – near the Israeli border especially.

For Turkey, the embassy move and the consecutive Israeli violence toward the "Great Return March" represented a red line for the Muslim world and resulted in the largest gathering in support of Gaza in the world hosted by President Recep Tayyip Erdoğan in Istanbul. Most importantly, the American sanctions on Iran also take aim at Turkish companies that have business with Iran.

This will surely cause concern for the U.S. as Turkey strengthens its relations with Iran. Some of the most recent manifestations are an affirmation that Turkey is the largest recipient of Iranian oil exports according to a recent report. According to the same report, Iran provides Turkey with half of its crude oil. Also, Russian state-owned Gazprom recently stepped in to offer a 10.25 percent discount to Turkish natural gas deliveries and to pay $1 billion as part of the deal.

If the U.S. does not take serious steps to mitigate these Turkish concerns and offer political and economic relief instead of increased pressure any moves in Manbij may result in further division between Turkish and U.S. interests. This would have a significant impact on the balance of power in the Middle East and Central Asia. For these two strategic allies, resolving the issue of Manbij means much more than moving a few chess pieces around a game board. Instead, the results of the coming meetings will reverberate across the board in a number of critical areas.