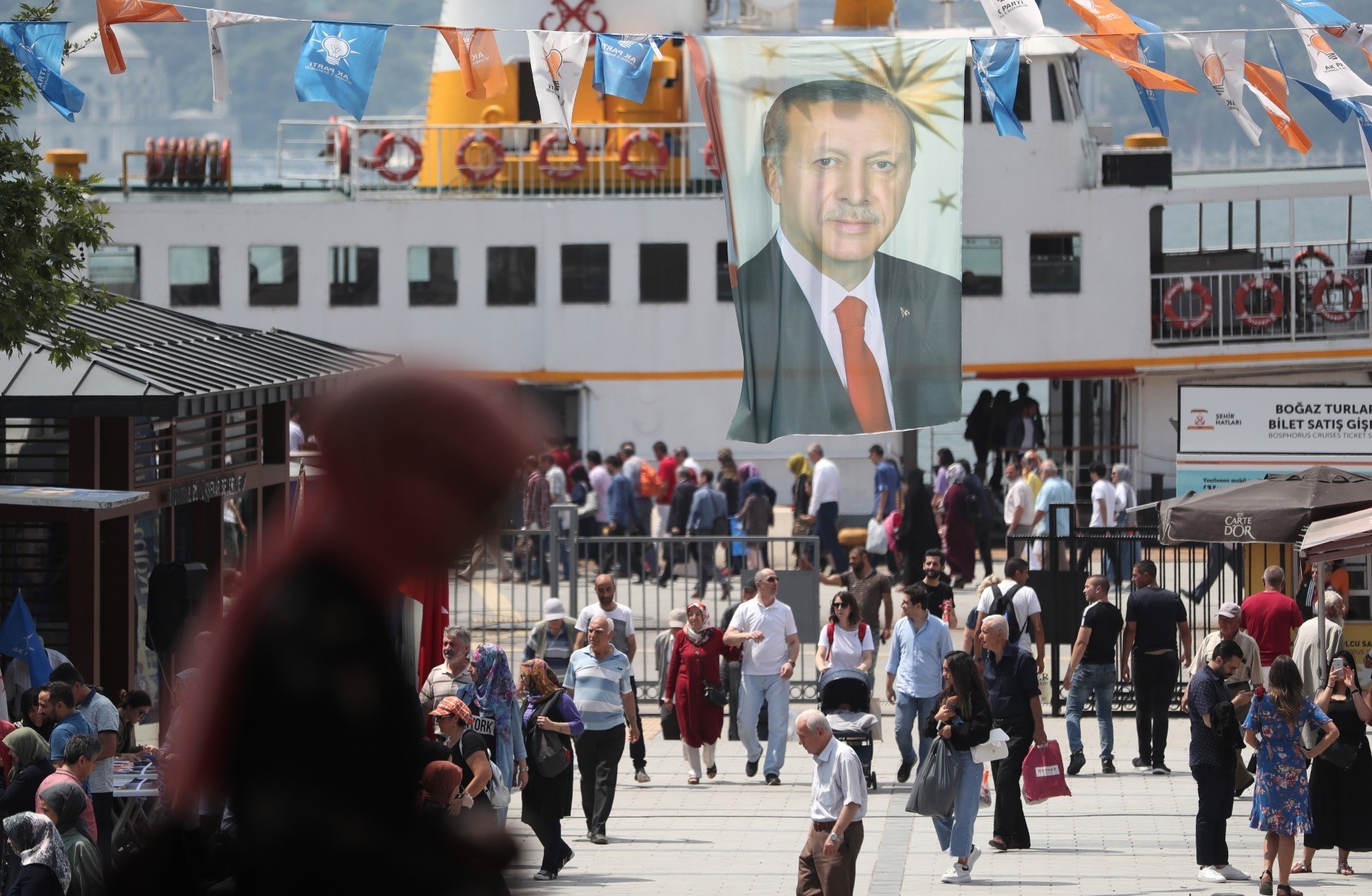 People walk under a huge picture of Turkish President Recep Tayyip Erdou011fan in Istanbul weeks before the elections on June 24. The Turkish growing economy is expected to continue to expand in the coming years under Erdou011fanu2019s stewardship.
by Mushtak Parker Jun 06, 2018 12:00 am

The International Monetary Fund (IMF) published its latest annual Article IV Consultation in April 2018 with Turkey under which a staff team visits the country, collects the latest economic and financial information, and discusses with officials the country's economic developments and policies.President Erdoğan and his economic supremo Mehmet Şimşek, the deputy prime minister, who is responsible for the management of macroeconomic policies, would on the whole be pleased by the general thrust of the assessment of the IMF directors of the Turkish economy, albeit with the usual caveats.

In their assessment, the IMF's executive directors "welcomed Turkey's solid economic performance last year, driven by strong policy stimulus and favorable external conditions." Such has been the strength of the recovery driven by increased domestic demand, strong exports and the sizable depreciation in the Turkish lira, that the economy, from the words of the IMF "now faces signs of overheating, including high inflation and a wider current account deficit."

Noting that the economy has been resilient thus far, directors emphasized that, "looking ahead, macroeconomic policies should be geared toward addressing the imbalances, lowering inflation, and strengthening buffers. In addition, comprehensive structural reforms will be necessary including labor market flexibility and strengthening the business climate to boost Turkey's growth prospects."

Turkey's economic growth, according to the IMF, has been higher than that of nearly all its peers in the wake of the global financial and economic crisis, underpinned primarily by a strong post-2008 recovery. Real GDP growth rebounded healthily to over 7 percent in 2017. In fact for the first three quarters it touched 7.4 percent, compared with 3.2 percent for the financial year, 2016. GDP growth for this year and next year are projected at 4.4 percent and 4 percent respectively – growth rates which the Western economies including the U.S., U.K., Germany and France could only dream of.

Not surprisingly, Turkey's GDP is projected to increase steadily over the next few years from TL 3.61 billion in 2018 to TL 4.17 billion in 2019 to more than double to TL 6.6 billion by the end of the next presidential term. Similarly, inflation, albeit still high compared to peer OECD economies, is projected to increase to 11.4 percent before embarking on a steadily downward trajectory to 10.5 percent next year to reach 8 percent in 2020 and beyond.

Unemployment however will remain a challenge given that the rate is projected to be virtually the same over the next five years settling at 10.5 percent per annum.

IMF surveillance of member countries includes the regular Article IV Consultations and the Financial Sector Action Plan (FSAP), which assesses the strength and effectiveness of regulation and supervision of the banking, capital market and insurance sectors in a member country.

In addition, the IMF's Core Principles for Banking, Capital Market and Insurance have become a standard tool to guide regulators and supervisors in developing and enhancing their regulatory regimes and practices. These over the last decade or so have developed into one of the few relatively reliable independent economic policy and performance accountability barometers of IMF member countries.

The new system and economic parameters

Politicians and pundits can argue about the merits of transforming Turkey's political system from a parliamentary model to an executive presidency, in which the elected president automatically assumes a troika of leadership roles – head of state, head of government and head of the ruling political party. Some stress that this concentrates too much power in the hands of one person.

But the world has seen scores of precedents including the U.S. presidency and those in Mexico, Brazil, Indonesia and Russia to name a few, and of course South Africa, which underwent a similar transformation from a prime ministerial model after Nelson Mandela, freshly released from prison after 22 years of incarceration by the Apartheid regime, became the first democratically-elected president of a free non-racial South Africa following the general election in 1994.

There are no reasons to believe that Turkey would be different and unsuited to an executive presidency, as long as the usual transparent democratic electoral practices are observed and there are enough checks and balances in place which would allow both the Opposition and members of the president's own party to scrutinize policies and hold him accountable. After all, if voters are disaffected or unhappy with particular policies, they can always vote out an incumbent president and his party, which in itself can oust any leader through a vote of no confidence.

The referendum on April 16, 2017 saw Turks vote in favor of the change to an executive presidency, albeit President Erdoğan would have liked the margin to be wider. In reality, the snap election on June 24 could be a repeat of the poll a year earlier. The difference is that a year is a long time in politics – the impact of the failed coup attempt in July 2016 is fast receding; Turkey's economic recovery is solid and on the right track albeit with several challenges that lie ahead; and the geopolitical landscape in the region keeps changing and evolving, especially in neighboring Syria and Iraq, which continues to pose stability, security and refugee integration challenges. The IMF directors in fact commended Ankara "for hosting large number of refugees and for their efforts to integrate them into the labor market."

While past recent consecutive elections fought and won by the AK Party and Recep Tayyip Erdoğan, some of them with landslide victories making these some of the most successful in contemporary Western electoral history, primarily focused on the economy and competence of its management.

I remember in my many chats with taxi drivers in Istanbul in the recent past, the one remark that stood out was: "I voted for Recep Tayyip Erdoğan. I have a job, a house and my children are getting educated. The cost of living could be better but is manageable. I don't necessarily agree with all of Erdoğan's policies especially regarding social and religious issues, but why should I risk changing my vote?"

While reversing the State of Emergency would be an important gesture toward "normal" politics and national reconciliation and unity, President Erdoğan, should he win the election, which seems highly likely given the paucity of opposition challengers of substance, knows that it is the economy that has stood him well in the past.

In the immortal words of Bill Clinton in the American presidential campaign of 1992, "it's the economy, stupid." That campaign slogan was actually coined by his aide James Carville who doggedly insisted that everyone should remain focused on the plight of working people. That mantra went on to become part of the American and global political lexicon.

Erdoğan is seen as a populist president whose main constituency of supporters are conservative hard-working people and professionals. Competence in economic management has become the mainstay of democratic politics in recent decades, especially in the wake of dramatically rising inequality between the haves and have-nots both within societies and between countries which the IMF has said is one the biggest threats to humanity, in addition to security, fighting terrorism and extremism, and embracing social media and the digital economy.

Leveraging the current strong growth environment and the country's medium-term growth potential, as the IMF executive directors also suggest, is a logical incentive in its own right to increase government tax revenues, attract greater foreign direct investment, increase productivity, lower unemployment and inflation, enhance pension reform, introduce minimum wages and decrease the cost of living, and further increase female participation in the workforce including flexible work options and longer maternity and paternity leave – all issues which affect the daily lives of Turks.

Erdoğan knows too well that it is indeed "the economy stupid" that will play a major role in voter sentiments come the elections on June 24.