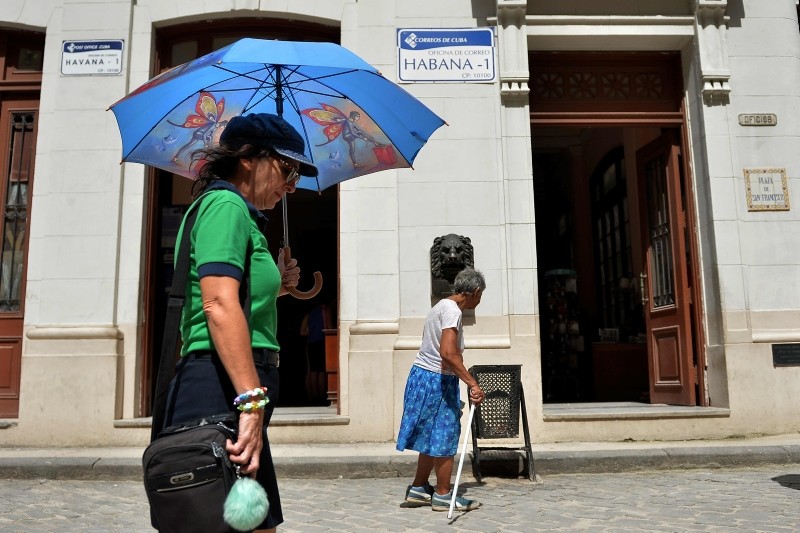 People pass by a post office in Havana after direct mail between Cuba and the U.S. was re-established at the end of a trial period despite a toughening stance by U.S. President Donald Trump toward the islandu2019s government, June 1.
by Shakir Husain Jun 08, 2018 12:00 am

Cuba's new President Miguel Diaz-Canel was among the first foreign leaders to congratulate Nicolas Maduro on his re-election as the president of Venezuela on May 20.

A month before the Venezuelan election, Maduro was the first foreign leader to meet with 58-year-old Diaz-Canel, who became Cuba's president in April in a development that signaled a generational shift.

Cuba values its alliance with Venezuela, which is crucial for both countries in facing an increasingly hostile U.S. blockade policy.

Some in the U.S. are still probably holding onto feeble hope that having the first non-Castro president in Cuba in 60 years may bring about significant changes to the country's foreign policy.

Such misplaced optimism may build on the Barack Obama administration's decision in December 2014 to restore diplomatic relations with Havana, even though the U.S. has gone directionless under President Donald Trump.

So far there is no sign that Cuba is considering revisions to its foreign policy that underlines solidarity with developing countries and is imbued with anti-imperialist declarations of the charismatic Fidel Castro.

Since the 1959 Cuban Revolution, the country's international image was shaped by Fidel Castro. The ailing Castro was succeeded as president by his younger brother Raul Castro in 2008.

Raul Castro, who became president for another five-year term in 2013, made it clear that he would step down and that Diaz-Canel was the new-generation leader groomed to take over for him.Diaz-Canel's rise was steady in Cuba's power structure as he worked for more than 35 years in various party and state roles. He became minister of higher education in 2009 and was first appointed vice president of Cuba's Council of State in 2013.

Diaz-Canel's elevation as president does not mean the old guard is no longer in control of the decision-making.

Raul Castro, 87, remains powerful as the first secretary of the ruling Communist Party and would ensure that Diaz-Canel earns the required experience and mass appeal to succeed him in that role as well in 2021.

It is this party that determines most important policies, including foreign relations.

Cuban officials are clear that Diaz-Canel will carry out policy changes where they are needed and not try to change the country's basic character.

Oscar Martinez Cordoves, Cuba's ambassador to India, recently gave a talk on how Cuba might perform under the new president.

Several social and economic policies are likely to be tweaked in line with the aspirations of Cubans as 77 percent of them were born after 1959, when Fidel toppled the government of U.S.-supported dictator Fulgencio Batista."There are many young people who have another experience … We are living in a new world," the ambassador said.

Sixty percent of Cuba's workforce is female. The private sector has seen its role in the economy grow and employs 30-35 percent of the total workforce.

But there is no appetite for a Western-style political culture or capitalism."We're not trying to repeal the socialist character but to perfect it," Cordoves said. "What we see in the future is that we will maintain our system. We are not going back to capitalism … We love independence; we want sovereignty; we want self-determination."

Such assertions are not liked in the U.S., which would like Cuba to be a customer of its consumerism.

An internationalist Cuba has been a thorn in Washington's side for decades and that is not about to change. Fidel Castro, who died in 2016 at the age of 90, is particularly admired in Africa for his solidarity against colonialism.

The Cuban military and political help for Nelson Mandela's struggle against the white apartheid regime in South Africa was invaluable.

Its significance can be gauged from Mandela's words directed against the United States, which was a defender of the apartheid regime.

"We are now being advised about Cuba by people who have supported the apartheid regime these last 40 years. No honorable man or woman could ever accept advice from people who never cared for us in the most difficult times," Mandela said during his trip to Havana in 1991.

Cuba has been generous with sharing its expertise with African countries in the medical and education sectors, sending thousands of doctors, nurses and teachers to Africa and attracting students from there. Cordoves said the new government will maintain this policy and "try to develop it more."

Similarly, Cuba hopes to maintain its policy of good relations with Non-Aligned Movement (NAM) countries. It is a different matter altogether that many of NAM's former champions are now firmly in the American camp.

Occasionally, people talk about finding new ways to keep NAM relevant as a group to promote solidarity among developing countries.

If the Trump administration gets more aggressive in enforcing the blockade against Cuba, there is no doubt the Cubans would seek support from every quarter, whether from NAM or the African Union.

Obama saw the futility of "an outdated approach that for decades has failed to advance our interests," in other words, bringing about a regime change in Havana. He did not lift the blockade, making it easy for his successor to undo the gains made in U.S.-Cuba relations.

If Obama's intention was to seek political change in Cuba by growing contacts inside the country and influencing society through right-wing Cubans, Trump appears ready to adopt more of the same U.S. policy that failed to deliver for six decades. Perhaps not another Bay of Pigs invasion, but a pig-headed U.S. blockade is here to stay.

To counter that, Cuba will fall back on Fidel Castro's old foreign policy.