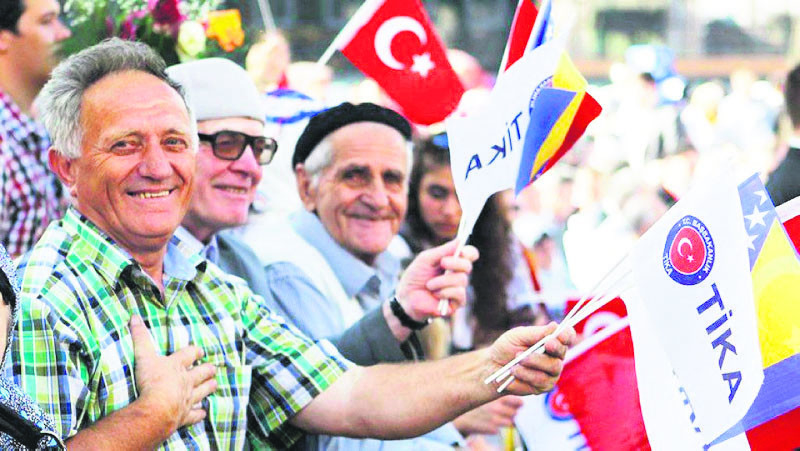 People wave Turkish and Bosnian flags at an opening ceremony for a project by the Turkish Cooperation and Coordination Agency (Tu0130KA) in Bosnia.
by Abdullah Çelik - Görkem Dirik Jun 14, 2018 12:00 am

Turkey is a rising regional power that holds a crucial role in the Balkans; it has been working to bring peace and stability to the region through state and non-state institutions

As the world enters an era of escalated tension between clashing powers, the frozen conflicts have begun melting. In this regard, the never ending ethno-nationalist, religious and economic crisis still mire the Balkans and have minimized the hopes for stability in the region.

This, once more, underlined the importance of mediation that is capable of finding a common language between parties to conflict. Hence, this has led to the intervention of super-powers in order to sway these conflicts to their interest.

To this end, the EU and NATO have managed to establish its superiority by offering economic aid, recuperation of institutions, and a security shield to the small states of the Balkans against aggressive and irredentist powers.

Apart from the EU, the U.S. and Russia, Turkey is also considered a crucial actor in terms of its ability to bring stability, peace and progress to the Balkans. Particularly, as Turkey redefines its socio-economic capabilities in the 2000s, the country also rediscovered its growing role in a forgotten region for Turkey, where Turkish legacy still remains a prominent element.

Therefore, Turkey is expected to play a balancing role by prioritizing its cultural and historical ties in the face of ever-increasing influence of global powers in the Balkans. We contend that Turkish role as a balancing and stabilizing actor can be observed in the socio-economic, cultural and political fields.

Political stability and economic boom has allowed Turkey to implement a more pro-active foreign policy abroad. From 2002 onward, Turkish policy makers realized the need for a better strategy to expand the Turkish sphere of influence, particularly in the Balkans.

With this, TİKA`s (Turkish Cooperation and Coordination Agency) budgets were increased and TİKA was given a broader responsibility to design Turkish soft power in line with Turkish foreign policy.

Today, TİKA initiates as well as assists several projects abroad in the fields of health, security, education, renovation, infrastructure and institutionalization in the Balkans. TİKA is also a prominent actor in terms of reviving the forgotten Ottoman past in the region.

To achieve this, today TİKA renovates the old Ottoman monuments, schools (madrasas) and finances the reconstruction of mosques across the Balkans. TİKA also coordinates the financial aid that are given to the Balkan states that accounted to $154 million in 2015.

Apart from TİKA, the Presidency of Religious Affairs (Diyanet) also actively engages in reviving the Ottoman heritage and Islam in the region.

In this respect, the biggest mosque in the Balkans, the Namazgah Mosque, was inaugurated in Tirana, Albania as part of Turkey`s "winning hearts and minds" strategy. Indisputably, these efforts have increased Turkey's reputation as the best alternative for many Balkan states that are in oscillation between the EU and Russia.

This also enables Turkey to prevent radical ideologies from spreading across the Balkans. In other words, it is our contention that Turkish soft penetration into the Balkans has the potential to ameliorate radical Islam and ever-growing Islamophobia among Orthodox population.

Moreover, the Yunus Emre Institution is another important branch for Turkish soft power whose main duty is to spread Turkish culture and language across the Balkans. Thanks to their contributions and efforts, today Turkish language is being taught as an optional course in elementary and secondary school in many Balkan countries, particularly in Bosnia. Through Yunus Emre and other state and non-state institutions, Turkey offers scholarship programs to students from relatively less-developed countries in the Balkans.

Studying in Turkey provides these students the opportunity to interact with Turkish people and culture that attenuates their stereotypes against the Ottoman heritage and Turkey. It must also be noted that there is a considerable amount of people migrated from the Balkan countries and residing today in Turkey. In parallel to this, there are Turkish minorities across the Balkans.

Hence, this enables Turkey to bridge people and to detect the sociopolitical problems as well as the needs. In part of this strategy, the Anadolu Agency (AA) has become a crucial instrument that broadcasts in Bosnian, Albanian and Macedonian languages. This, undoubtedly, enacts Turkey to alter the negative perceptions towards the Turks and Turkey.

These institutions and strategies have enabled Turkey to become a voice of a vast region and the champion of the Muslim population across the Balkans. This Turkish model, a combination of Islam, modernity and liberal democracy has been embraced by many people.

However, the "Neo-Ottoman" labeling of this strategy diminished Turkey`s capability to reach the hearts and minds of the non-Muslim population in the Balkans. In this regard, it should be remembered that Turkey`s main challenge in the Balkans is anti-Turkish nationalism, upon which the national identity of many states was based.

Therefore, we contend that Turkey needs to annihilate the perception that Turkey only favors the Muslim population. To achieve this, Turkish TV series and movies function as part of Turkish soft power instrument which help to recuperate Turkey`s reputation in the eyes of many, including the Orthodox Slavs. In other words, embracing more the non-Muslim ethnic groups in the Balkans would enable Turkey to become a stronger alternative polar to the EU and Russia.We also contend that a new wave of ethno-nationalist and religious conflicts may hinder Turkish influence in the Balkans, considering the fact that Turkish role can only be improved in peacetime. It is precisely because Turkey is not a conflict-exploiter that benefits from instabilities. In addition to this, a possible conflict that would take place in the Balkans, may endanger Turkey`s multifaceted relations with different ethno-religious groups across the region. This would not only decrease the Turkish influence and Turkey`s interests in the region but would also lead Turkey to lose its role as an indispensable player that is essential for the preservation of the peace.

Peace and stability reflects upon Turkey`s bilateral relations with the Balkan states. In this regard, it can be said that Turkey`s economic presence in the Balkans has significantly augmented for the last 10 years. Today, Turkish firms conduct project in the fields of education, telecommunications, education, finance and construction.

Moreover, Turkish banks have opened branches in almost all Balkan states. It is also important to mention that the similarities in consumption habits between the people in Turkey and the Balkans have rendered the region a very profitable market for Turkish companies. The geographical proximity is another important fact which, in fact, reduces the transportation costs and alleviates the bureaucratic obstacles to export and import goods.

To conclude, Turkey may not be a major "play-maker" yet but Turkey is historically one of the most important actors in the Balkans. Turkey is probably the most debatable actor that is adored and detested at the same time by the people in the Balkans.

Therefore, Turkish soft power mechanisms and its instruments can transform these disadvantages into advantages. In other words, it is in Turkey`s capability to wield its power and to maximize its sphere of influence in the region, where Turkish soft power projection is required.

* Çelik and Dirik work for the TRT World Research Centre