The saga of the Manbij Military Council and American duplicity 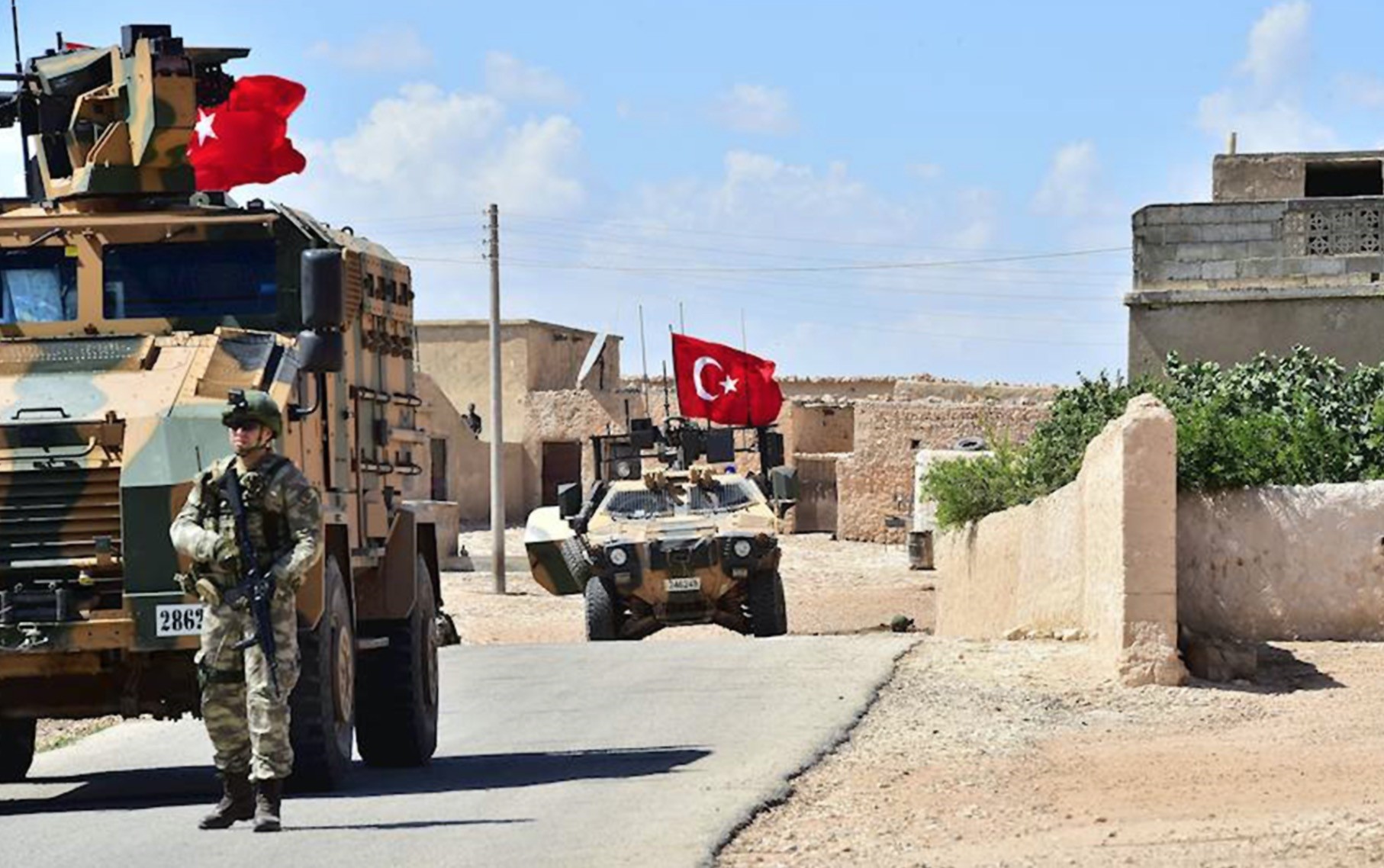 Turkish soldiers accompanied by armored vehicles patrolling near the city of Manbij, northern Syria as the Manbij operation continues with U.S. cooperation, June 18.
by Obaida Hitto Jun 21, 2018 12:00 am

In a very lackluster manner, the results of the much-anticipated Turkey-U.S. working group meetings, that culminated in talks focused on the issue of Manbij, have begun to tear at the seams. To some this may come as a surprise; while an avid observer of the Syrian file knows this is not at all a surprise.

The Manbij Military Council (MMC) was formed in April 3, 2016 with the joining of a number of groups including Thuwar Manbij, Liwa Jund al Haramein, the Gathering of the Euphrates Brigades, Liwa al Qusay, the Turkmen of Manbij Brigade, the Northern Sun Brigades (from which the MMC leader Abu Layla is well known), and the Tribal Army. Some reports estimated the Manbij Military Council included approximately 3,000 Arab forces and 450 People's Protection Units (YPG) forces at its beginnings.

This military began to take form on the heels of U.S.-led international coalition airstrikes against Daesh in Kobane. The anti-Daesh operations inadvertently breathed new life into the PKK's Syrian branch the YPG's presence in Syria, via the Syrian Democratic Forces (SDF). The SDF is a U.S.-backed coalition of armed groups dominated by the YPG and the preferred ally of the U.S. military in Syria in the name of fight against Daesh. Between May 31, 2016 and Aug. 12, 2016 the YPG-led SDF coalition and the MMC conducted a U.S. international coalition-backed operation to take Manbij from Daesh. Two weeks later, on Aug. 24, Operation Euphrates Shield by Turkey was kicked into high gear warning that all YPG forces should retreat east of the Euphrates River – as was promised by the then reigning Obama administration; meanwhile Turkey-backed Free Syrian Army (FSA) troops moved in to take Jarablus from Daesh. This move put the Turkey-backed forces on the front lines with the YPG forces. Then U.S. troops moved into positions on the Sajur River creating a de-facto demarcation line to protect their chosen ally in the fight against Daesh – ironically they were using one terror group to fight another terror group.

Around the same time, the YPG, and its female wing, the Women's Protection Units (YPJ), announced that they would be leaving Manbij. Of course this was not out of the kindness of their hearts, their concern for the security of the region or their interests in preserving the ethnic balance of the Arab majority city.The U.S.-led Operation Inherent Resolve spokesman at the time clarified via the social media messaging platform Twitter that "Main element of SDF Manbij liberation force has gone east; some forces remain to finish clearing, IED removal as planned."

Turkish officials insisted that anti-terror operations in the region should be aimed at clearing all terror groups – including Daesh and the YPG. Presidential Spokesman İbrahim Kalın confirmed this in a tweet on the same morning of the launch of Operation Euphrates Shield.

To leave or not to leave?

Fast forward to November 2016 and Brett McGurk, the U.S. envoy for the Global Coalition to Defeat Daesh, was announcing another YPG retreat from Manbij. The conflicting reports are obvious even to a novice observer. Just two months previous to McGurk's statement another international anti-Daesh coalition spokesman was also claiming that the YPG was leaving Manbij. An astute observer would question why the YPG withdrawal from Manbij was being announced more than once?

Despite American indecision and inability to control the terror group it had allied with on the ground in Syria, Turkey pushed forward with its own anti-terror operations clearing 2000 sq km of border areas in Operation Euphrates Shield.

Throughout 2017 the Turkish government was hopeful that the incoming Trump administration would follow through with its campaign promises and reconsider its faulty strategy in Syria – supporting one terror outfit to defeat another. A matter Turkish officials have repeatedly addressed with both the Obama and Trump administrations.

Then in January 2018 Turkey launched Operation Olive Branch continuing to pursue its goal of clearing the border areas from terror groups. In Afrin, the obvious target was the PKK and its Syrian terror affiliates. This time around the situation was a bit different since the international coalition did not have direct access to these locations – at least that was the assumption. In this regard, Deputy Prime Minister Bekir Bozdağ warned in a televised interview that "If we happen to see American soldiers in YPG uniforms, they are a target. Let them not confront us." U.S. troops are known to be travelling in the same convoys, sometimes wearing YPG uniforms, during the U.S.-led international coalition training and support operations in northern Syria.

Now that Operation Olive Branch has mostly subsided and Turkey's sights are set eastward, Manbij is the next flashpoint. The series of Turkish-U.S. working group meetings have resulted in a road map for YPG withdrawal from Manbij. This includes a first phase which would have the forces leave the city and a second phase that would see a joint Turkish-U.S. observation of the city while choosing mutually acceptable parties to take over the civilian and security administration of the city and a third phase which will see a similar framework applied to other areas in north eastern Syria that are under YPG control.However, as the meetings were gearing up and talks of withdrawal were floating around the media, the YPG dominated MMC denied any intention of leaving. In fact, their spokesman Shervan Derwish repeatedly confirmed that the group had no intention of leaving Manbij and were fully intent on undercutting the plans of what they perceived as an assaulting Turkish force.

Throwing more shade on the Turkey-U.S. Manbij road map the MMC posted a series of posts on their Facebook page exclaiming that Turkey was responsible for allowing terrorists into Syria and that any group working with Turkey were collaborators and traitors. A half hour later the infamous withdrawal announcement was posted with much candor. The message clearly states, once again, that the trainers had finished their mission and were leaving the city but the forces which they trained would remain-hence the MMC. They closed their statement exclaiming that they would return to Manbij if it was deemed necessary – in an obvious reference to a possible Turkish offensive to clear the city from any remaining terrorists.

This isn't news to some since the MMC has repeatedly expressed its discontent for Turkey and its purported intentions for Manbij. An issue here is that this was happening as the United States was engaged in drawn out discussions with Turkey supposedly arranging for a withdrawal of the YPG from Manbij to the east bank of the Euphrates River. Furthermore, supposedly the road map includes plans to implement a similar plan in other Syrian cities where the YPG are in control.

Interestingly, on June 6, a pro-Saudi publication Okaz, published an interview with Syrian PKK leader Fehman Hussein, known by his nom de guerre Bahoz Erdal, from the Qandil mountains. The Turkish military is currently engaged in an offensive in northern Iraq moving steadily toward the PKK's mountainous enclave. It was thought that Hussein, born 1969 in northeastern Syria, was killed near Qamishli in the summer of 2016. His interview, conveniently timed with the announcement of a YPG withdrawal from Manbij, clarifies a number of issues. Hussein claims he was in Syria in 2014 for three months on a social visit; offered advice and ammunition to the YPG in fight against Daesh; and warned Turkey of an increasingly violent fighting season this summer. Some of these facts are confirmed and clarified by Tala Sillo, the defected SDF Spokesman, who explained the intricate relationship between the PKK, YPG, and SDF; as well as Hussein's role in relaying orders from the PKK command to the SDF. Hussein's positions as a military commander for the PKK in Syria and his heading of a group known as the Kurdistan Freedom Hawks (TAK) as cover for the PKK presence in Syria is well known to security officials since 2012.

On the same day, U.S. Secretary of Defense James Mattis had this to say about the Manbij saga:

"Turkey is a front line country for NATO. A front line country which struggles with the disaster in Syria which Assad brought to his people with the support of Russia and Iran. We should find a way to ensure Turkey`s legitimate rights. We comprehend their concerns, at the same time we are beating Daesh. The SDF was the only organization at the time that was able to throw Daesh off track, and defeat them in the field in very, very tough fighting, and we will not simply cast that organization aside. This is a tough issue but we're still dealing with these challenges. And also we're doing this considering Turkey, we do not ignore them."Now that Turkish military operations have started in northern Iraq aimed at clearing the Qandil mountains from the PKK leadership American actions are more critical than ever. It is quite a disturbing coincidence then that the U.S. would send hundreds of more armored vehicles to the YPG-dominated SDF in northeastern Syria according to a SDF source that spoke to Russian media.

Despite reaching an agreement on a road map for withdrawal and future operations, the fate of Manbij and eastern Syria remains unclear. American forces have numerous bases in northeastern Syria and are the main force protecting the YPG from a Turkish operation similar to that of Operation Olive Branch and Operation Euphrates Shield. Iraqi airstrikes in Syrian territory; Turkish concerns about the YPG taking more territory from Daesh with the U.S. help; ongoing Turkish operations in northern Iraq towards the PKK's historic mountain base, and a shifting geopolitical playing field all complicate the possible scenarios following the Manbij road map meetings.

What is clear, however, is that the United States is unwilling to fulfill its promises of pulling out of Syria, supporting a terror group that threatens a major ally – the second largest military in NATO – and taking much needed steps towards normalizing relations with Turkey.Mattis recently announced that talks would take place in Germany to discuss the implementation of the Manbij withdrawal road map. He described the first phase of the plan as efforts to identify where the Turkish and American military forces are positioned and then possibly conducting joint patrols in the area. Is it possible that they will use these new armored vehicles to transport the YPG fighters out of Manbij? If so, where will they take them? Qandil?

One thing is for sure, the road to clearing the Manbij pocket from terror elements is getting windier day by day.