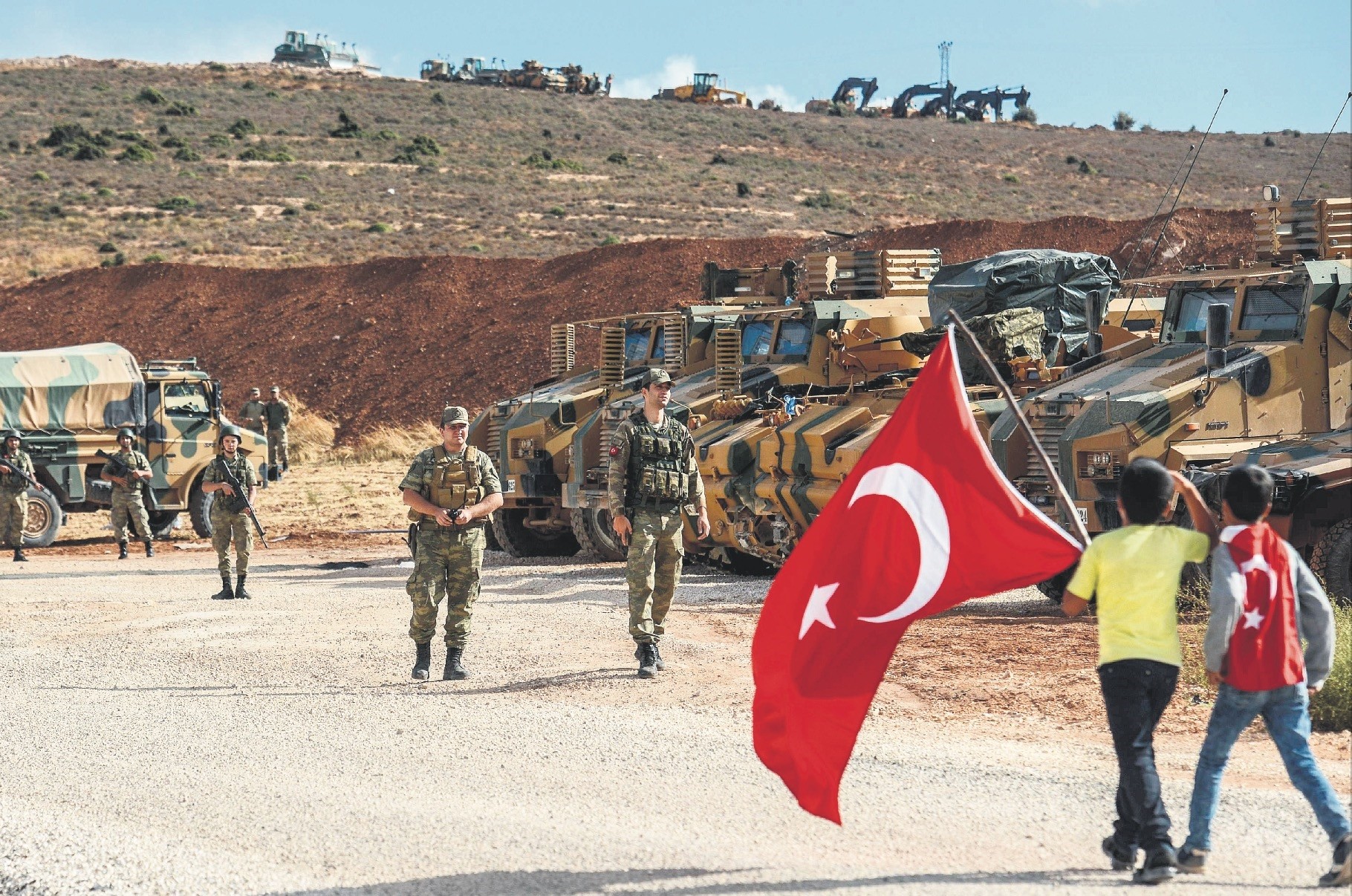 Turkish soldiers stand near armored vehicles as two young boys holding Turkish flags arrive during a demonstration in support of the Turkish armyu2019s Idlib offensive along the Turkey-Syria border near Reyhanlu0131, Hatay, Oct. 10, 2017.
by Hüsamettin İnaç
Jul 06, 2018 12:00 am

Readers should not let news stories manipulate them before seeking out facts and accurate reports, particularly when looking into developments in the Middle East

Foreign policy is a state's reactions toward the impact of external dynamics within the international system. In this regard, Turkey has followed a coherent Middle Eastern policy regarding the civil war in Syria. Since the upheaval, neighboring Syria has posed a threat to Turkey since the Bashar Assad regime ferociously reacted against civilian protesters on March 15, 2011.

In the beginning of the attacks, Turkey immediately warned Assad, asking him to stop and make his country more democratic by holding fair elections. Predicting the future destabilization of the country and accordingly the possible intervention of great powers, Ankara repeatedly tried to convince Assad, but the Syrian leader chose to suppress and attack the opposition groups, fueling the crisis that has led to a years-long calamity in the region.

As such developments started increasing, the then-U.S. administration under the leadership of Barack Obama promised that the regime would be overthrown soon and persuaded Ankara to follow a regional policy in compliance with its predictions. Contrarily, Obama remained silent and broke his promise, while Russia and Iran took center stage and followed active Syrian policies, filling the gap.

As a neighboring country, Turkey did not want a destabilized Syria and supported the formation of a diverse opposition group consisting of Muslims, Christians, Yezidis, et cetera. However, the major opposition group namely the Free Syrian Army (FSA) was not able to legitimize itself in the international arena due to the U.S.' own agenda.

Moreover, the very same international community smeared Turkey's Syria policy by portraying Ankara's intervention as a violation of Syria's territorial integrity, despite the fact that the Turkish administration was only trying to prevent the country from being divided.

Accordingly, Turkey initiated the Astana peace process with Iran and Russia as Obama deepened the crisis. On the other hand, Turkey, as an independent country, criticized the U.S. policies and took positions against them, which pushed Ankara into the alliance with Russia and Iran.

Meanwhile, the U.S. backed the creation of a PKK-Syrian terrorist group, the People's Protection Units (YPG), under the pretext of fighting against the bloody Daesh. The YPG's aim was to create a terrorist enclave in the region, including on the southeastern border of Turkey. Ankara naturally reacted against it and accordingly launched Operation Euphrates Shield and liberated northern Syrian towns from PKK-linked groups and also Daesh. Russia was aware of Turkey's security concerns and did not object its cross-border offensive, while the U.S. criticized the Turkish operation.

In the post-operation era, the terrorist groups did not stop following a separatist policy and threatened Turkey's peace and stability. That is why Turkey had to launch another major counterterrorism operation in the region, namely Operation Olive Branch. The offensive again aimed at ending the terrorist threats in the region and helping Syrians return to their homeland.

The two big offensives succeeded in being a hope for the regional people and groups against the terrorist groups. In short, Turkey managed to push some terrorist threats back and secured its country while backing opposition groups and helping civilians return home. But through it all, Ankara was unable to escape being smeared in the global media.

The U.S. was disturbed by the Turkish offensives but could not do anything tangible on the ground. As a result, Washington started smearing Ankara's policy and efforts in the global arena.

That is why there were some claims in the media that Turkey's intent was to support Daesh through the two operations and to kill Kurdish people. They even claimed that Turkey was massacring Kurds. Forced and convinced by the U.S., some EU countries joined the anti-Turkey club and tried to overshadow Ankara's Syria policy. Periodically, Iran also engaged in its own smear campaign against Turkey's operations since it perceived the Turkish-Russian rapprochement as a threat to its alliance with Moscow. For example, although the Assad regime carried out chemical attacks on civilians in eastern Ghouta, the very same international mainstream media manipulated the world to think that Turkey was responsible for the deaths of the civilians. On the contrary, Turkey took and is taking all the necessary precautions to avoid damaging any civilian and innocents in the region while eliminating terrorists.

In the Turkish Armed Forces' (TSK) Afrin operation, the scenario was the same: The mainstream global media, particularly the Western outlets, smeared the Turkish action despite the fact that Ankara's aim was again to stop the terrorist groups gaining power. Such news stories went on and are still going on from time to time.

Consequently, we should not let any news articles manipulate us before seeking out facts and accurate reports for ourselves. Unfortunately, today we live in a world where we are seen by some as a target to be directed. Unless we want to serve their hidden agendas and interests, we need to make decisions and establish opinions based on facts and rational thinking. Who knows, with such minor actions, the world may be a better place to live in.

* Dean of the Faculty of Economics and Administrative Sciences, head of the Political Science and International Relations Department at Dumlupınar University