Challenges in the way of real, sustainable growth and stability for Turkey 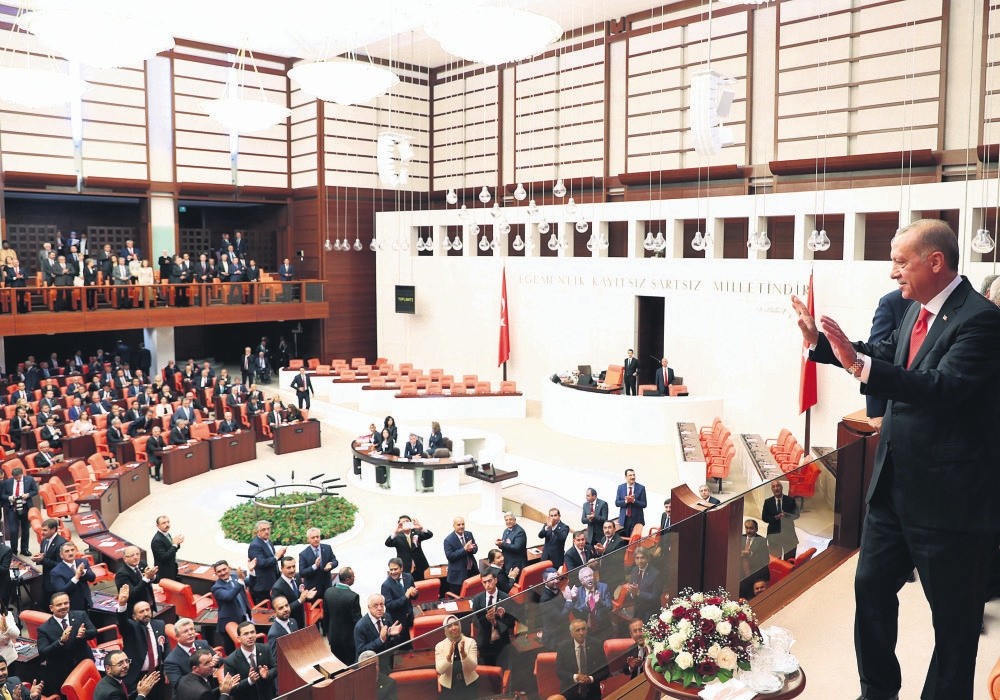 President Erdou011fan waves to parliamentarians as he arrives to attend the opening session of the new Parliament in Ankara, July 7.
by Ergin Yaman
Jul 10, 2018 12:00 am

Turkey has to do better to honor the support at home and around the world in order to come closer to its goal of being the voice of the oppressed, vulnerable and those in despair. To do this, Turkey has to openly and bravely face some of its challenges that go against the very basic tenets of Islamic faith.

Turkey has become a source of hope for Muslims around the world in the personality of President Recep Tayyip Erdoğan. As much as the electorate in Turkey, a substantial amount of Muslims around the world were very closely watching the recent combined parliamentary and presidential elections. They experienced a similar level of excitement with the people of Turkey. For many, President Erdoğan has become their voice while some others have felt the first-hand experience of solidarity from Turkey – for instance in the case of Somalia.

While all this support and hope is great and touching, it attributes an enormous amount of responsibility on the shoulders of the rulers of Turkey from the bottom to the top and requires such a conscience. As part of this responsibility – not only toward the people of Turkey but to Muslims around the world – Turkey has got to do better in every sense, and President Erdoğan and the people he appoints have to do better. And to do better, there are a number of challenges that President Erdoğan, his party, his Cabinet and the senior figures he appoints have to overcome.

First and foremost, lack of stability is one of these challenges that Turkey has to overcome. In other words, Turkey has to instill stability through reforming and upgrading systems, policies, standards, work ethics and values by which all institutions and professional workforces are operating across the board. We all know that there are countries in the world that are not so much affected by which political party is in power because their institutions and the abovementioned standards that are governing these institutions are so well-established and so well-run independently of this or that party.

The United Kingdom is for instance one of these countries whereby it really doesn't matter that much whether it is a Labour, Conservative, Liberal Democrat or Green party that is in power because the country's local and central institutions all effectively operate. The politics in these countries is largely more about catching up with contemporary developments in terms of introducing new governing policies to render the workforce and institutions competitive in the global market in every sense and maintain their countries' foreign interests. Unfortunately, the situation in Turkey is still far off from this goal for a number of reasons.

Of course, it would not be just to look down on Turkey for this reason because each country has its own dynamics and a peculiar evolution of these dynamics historically that have led them to where they are at the moment. Having said this, the significant ongoing public support for the past 16 years has to be cultivated in a way that is going to lead future generations to live in a country, which is not so much affected by ruling party but run by principles only aiming to promote the best in everything.

Although Turkey has enjoyed stability over the last decade and a half in terms of the fact that the same party has won the people's support to remain in power, this stability has not manifested in key ministries or government institutions although there are exceptions like the Ministry of Health which has managed to develop a well-functioning system and greatly appreciated by society.

This is because of the fact that although the same party has been in power, there have been multiple changes of ministers in almost each ministry and a subsequent high turnover of senior managers in key government institutions. The Ministry of Education, which one of the most important – if not the most – is one of these ministries that have such a fate.

This probably would not have had too much of an impact if Turkey was equally enjoying well-established systems and a workforce operating in line with the matters. The absence of this has meant that whenever there has been a change at a top level, this has streamed down in terms of changes of senior figures leading key institutions. This has meant every new management has had to spend a considerable amount of time to get to grips with their jobs by which time almost another change has been due.

Another challenge is the change of culture among those who are occupying senior positions. From the manager at the bottom of the hierarchy to the senior figures at the top, there has to be a change of culture whereby they act as the servants of the public rather than as "pretend President Erdoğans."

To achieve this, the Cabinet, the top officials and senior figures, have to be chosen from those who really and truly mean business. Turkey can't achieve when those who are appointed are almost always attending to this and that opening or the number of visitors (most of whom are irrelevant to their posts) they are hosting on any given day and so on whilst neglecting their primary duties really badly.

Turkey could only do better if those who are appointed to lead key government roles and institution are those who are doing their job best rather than those who are showing off through all media outlets and at every occasion or event for personal gain.

A further challenge is adopting the system of meritocracy to ensure that those who are serving are selected according to merit as opposed to personal links, ideology or party links. Again, in developed countries career progress is largely based on work experience, skills and competence and unfortunately in Turkey this is still a significant issue that is yet to be addressed. People with very little work experience and as a result, very low-skills, are occupying roles that they are not able to deliver or meet their requirements.

As a consequence, there is a pattern of the least experienced and knowledgeable attempting to lead the most experienced which causes all sorts of shortfalls in terms of goal setting, strategy devising, long-term planning and so on. For this very reason Turkey has to get this issue right if it wants its professional workforce to compete with the global workforce across the world.

Turkey can't do better when senior managers are struggling to catch up with the basics or functioning of the organizations that they are managing or they are having to spend a considerable amount of time to get to the grips with the jobs they are meant to be the best at in order to lead any given organization from strength to strength.

Moreover, Turkey can't do better when less senior staff members are spending the majority of their time attempting to increase the knowledge of the senior figures that are appointed or persuade them about what approach is best as they simply lack knowledge about the institutions they are managing.

As such, appointing people in line with their qualifications, experience, skills and competence has to become a priority without any further delay. This is not only imperative in order to be able to compete in the global market but it is simply the right thing to do. The fact that this has not been done before President Erdogan's time can't be used as an excuse for not developing such a system and there are worries attached to adopting such a principle; it falls again on the shoulders of those in management to address these worries in a way that paves the way for the best to lead rather than the most well-connected.

This is a decree to Muslims as highlighted in Surah An-Nisa Ayah 58. "Verily, Allah commands that you should render back the trust to those, to whom they are due; and that when you judge between men, you judge with justice." In this ayah, there is no discrimination between Muslims or non-Muslims, or those who feel close to this or that party but the emphasis is merely on whoever is most fit for this trust.