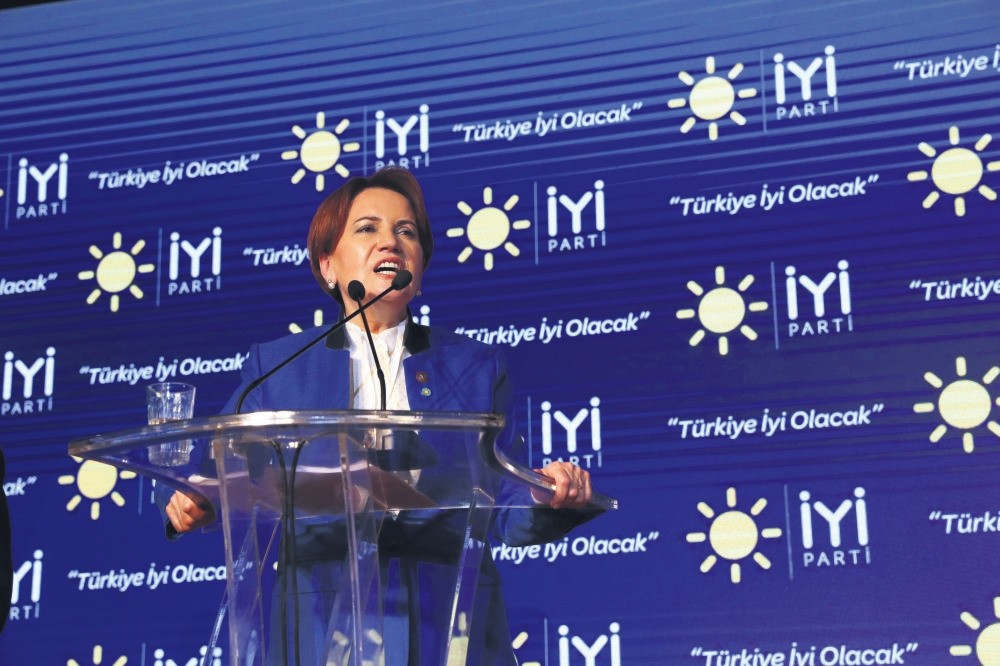 Good Party (u0130P) leader Meral Aku015fener during a meeting as part of the campaign for the June 24 parliamentary and presidential elections.
by Hazal Duran
Jul 27, 2018 12:00 am

After its foundation in October 2017, the Good Party (İP) has already faced multiple serious crises in the political arena. Especially during the election process, the party could not manage to provide political stability and this resulted in collective resignations in several of its branches. The party faced the most serious threat to its existence after the elections. Even though the İP garnered 9.6 percent of the votes in the parliamentary elections, this result satisfied neither the leading cadre nor the supporters of the party. This dissatisfaction resulted in a serious fight during a meeting of party officials to evaluate the election results. Because of the rising tensions, Meral Akşener, the leader of the party, called an extraordinary congress and emphasized that she would not seek re-election.

Analyzing the recent developments in the party and their possible reflections in the future require us to evaluate the root causes of the ongoing crises. Indeed, there are various underlying reasons behind the failure of the party and its leading cadre in politics. Firstly, the party could not frame its political understanding and ideological stance in a full-fledged way. Especially during the foundation process of the party, it was stated that the new party would act with a new understanding in Turkish politics instead of following the ideological stance of the Nationalist Movement Party (MHP) and other right-wing parties.

Thus, it was understood that the party would prefer catch-all party politics that were restructured to gain immediate electoral success via utilizing narrower political tasks and broadening its intended appeal. Even if the party claimed to do so, it has never adapted catch-all party politics successfully. Firstly, the party could not bring different circles in society together despite all efforts. For instance, the leading cadre of the party used multiple discourses to different circles. Their discourse changed according to whether they addressed a nationalist, center-right, or leftist circle. This caused an ideological fuzziness in the party and created a gap in the party's identity politics. At the end of the day, the party was trapped into pragmatism and populism and it did not help it fill the gap arising from this ideological issue.

Another reason for the failure arose from the party's formation as a splinter party. The İP was formed by a group who vdissented from the MHP in 2017. After a leadership struggle within the MHP, the failed group left the party and formed the İP. In Turkey's political history, there are a lot of examples of party splits. However, there are just a few examples where the splinter party got support from the voters and managed to survive in the political arena.

The most well-known example of a successful splinter party is the Democrat Party founded by former members of the Republican People's Party (CHP). In general, most splinter parties failed to get support from voters and collapsed soon after its foundation due to emerging conflicts. Even these conflicts resulted in another split in the new party most of the time.It is obvious that the İP shares the destiny of previously-founded splinter parties. After the foundation of the party, the competition among leading figures in the party began. When it is thought that the leading cadre of the İP is formed by previous candidates for the party chairmanship in the MHP, it is highly possible to see another competition among these figures for the chairmanship of the new party. Thus, the party's leading cadre has never shown unity and solidarity among the masses. The latest crisis in the party actually brought the latent ongoing competition to the surface.

Soon after the elections, the party officials made different statements about the party's position in Parliament that shows the its blurred identity. Some members of the party stressed that the party should support the Justice and Development Party's (AK Party) politics while some others suggested collaboration with the MHP. Yet, the party's leading cadre could not frame the function and position of the party. Thus, the party de facto split into various groups that made unity impossible.

Overall, the latest crisis caused Meral Akşener's call for an extraordinary congress which will be held on Aug. 12. Because Akşener announced that she would not be a candidate for chairmanship, some groups within the party tried to convince her to reconsider. However, Akşener made another announcement and fortified her decision. These developments show that even if Akşener becomes a candidate or not, it is difficult for the party to provide unity in its structures anymore. Thus, it is not an exaggeration to say that the party may collapse or split into new political organizations in the next term.