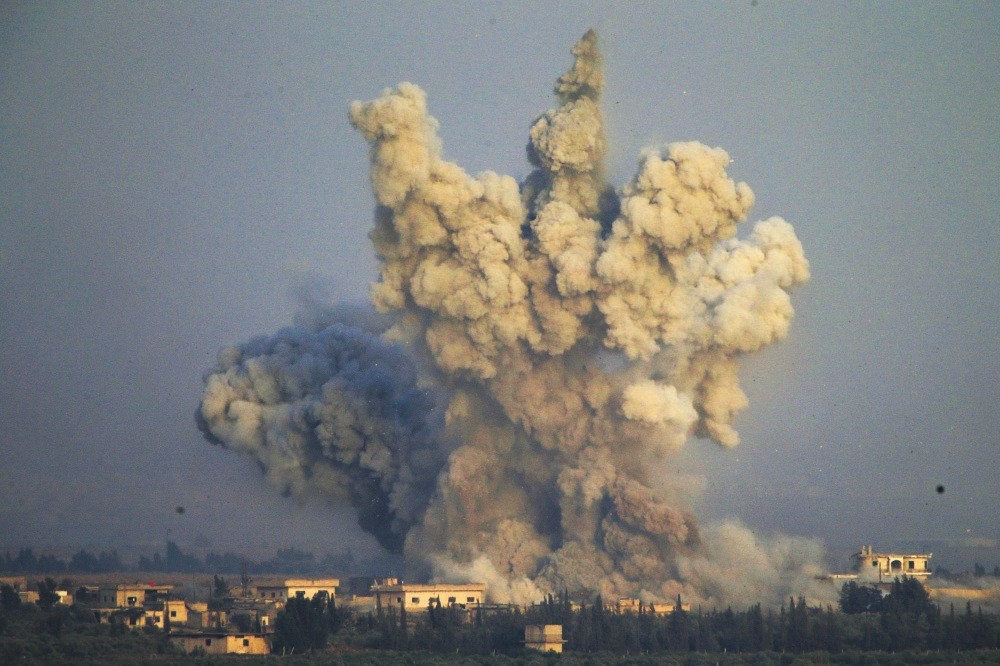 Smoke and explosions from the fighting between Assad regime forces and opposition groups, southern Syria.
by Mohammad Pervez Bilgrami
Aug 02, 2018 12:00 am

For obvious geopolitical reasons, the Baathist regime of the Assad clan in Syria has been Tehran's only consistent ally in the region since its 1979 revolution. Iran's unwavering support of the Assad regime since the dawn of Arab spring protests in early 2011 has proved that; it has not only provided weapons, military advisers, specialized troops and thousands of Shiite fighters but Tehran also opened its coffers for the embattled Bashar Assad regime by providing billions of dollars in aid and assistance.The recent Russian call for the withdrawal of all foreign forces from Syria, including those of Iran and Hezbollah, the frequent Israeli attacks on Iranian military installations in Syria and the announcement of renewed sanctions by the U.S. has made the things quite difficult for Iran to sustain its sectarian adventurism in Syria. It appears that the Russian plan in Syria does go in harmony with the over-commitment of Tehran to the Assad regime.

The biggest challenge for Iran in Syria is actually to mitigate the huge demographic imbalances. The proxy regime of Bashar Assad has been facing a huge demographic inequality with the small minority of Alawite/Nusayri vis-a-vis the predominant Sunni majority of the country.

There are reports of the regime engaged in populating Shiites from Iran, Iraq and Lebanon in the localities where the Sunni population was evicted to alter the demographic balance in Syria. To legalize the brutal ethnic cleansing, the regime has already introduced a law to confiscate the abandoned properties of refugees and allocate them among its own people. The recently introduced absentees law no. 10 calls on Syrians to register their private property with the ministry with the local administration within 30 days. The legislation could allow the regime to confiscate the property of displaced Syrians.

Even if Iran succeeds in bringing about the planned alteration in demographic balance in the regime-controlled areas, there still remains a large U.S. controlled area east of the Euphrates and also a significant Turkish-controlled area in northern Syria which is impossible to be demographically altered in favor of Shia Iran. Such tactics will also not work due to a huge Syrian refugee population in neighboring Turkey, Jordan and Lebanon which is hugely Sunni Muslim. In such circumstances, Iran will not be able to turn Syria into Iraq; it can only endure with this plan either by delaying the possibilities of democratic transition or effecting the partition of Syria.

It was Russian military intervention launched in September 2015 that turned the tide of military balance in favor of Assad. Iran, with its numerous military experts and foot soldiers, was active there since the beginning of the Syrian civil war but it could not halt the march of the Syrian opposition. It was the Russians who not only halted the opposition's onslaught but also turned the tide in favor of the regime. After the fall of Darra, the cradle of Syria's uprising, more that 60 percent of Syrian territory has now returned to regime control.

Though Iran is part of the Astana dialogue where Turkey and Russia are the key players, Russia agreed with Turkey to expand the latter's presence in northern Syria through military operations against Daesh and the People's Protection Units (YPG) terror groups and also by establishing military posts in opposition-controlled areas. Iranians never liked the increasing Turkish military footprint in Syria but they are not in a position to take any unilateral action against this growing presence in northern Syria.

Russia is not willing to safeguard Iranian military installations from Israeli air raids. Israel has many a time attacked Hezbollah positions in Syria and eliminated many of its top leaders since the beginning of the civil war in Syria. Now, Israel has also started targeting Iranian bases in Syria very frequently with the tacit understanding of Russia.

Apparently, both Iran and Russia back Assad in Syria but they have diverse interests and strategies in the conflict. Unlike Iran the Russians cannot remain in an open ended conflict in Syria for long. Thus, the Russian endgame in Syria seems to have arrived. After the recent meeting with Assad in Sochi, Putin called for the end of foreign military presence in Syria including Iran, Lebanese Hezbollah and other Iran- backed Shiite militias from Iraq, Afghanistan and Pakistan. Iran knows that the unsettled, conflict-ridden Syria guarantees its military presence there. However, any democratic transition will naturally jeopardize its position in Syria. Unlike Assad's rhetoric of taking back every inch of Syrian land by continuing armed conflict, the Russians think otherwise; they are working on an exit strategy from the Syrian armed conflict by pushing some kind of transition through the dialogue process.Iran has been expanding a long-term economic, military, political, religious and cultural presence in the regime-held parts of Syria. Iran's greatest challenge is sustaining its large financial and military aid to Syria after the announcement of renewed U.S. sanctions. Iran has provided tens of billions of dollars in its military intervention to prop up the regime since 2011. However, it faces its own crisis with renewed U.S. sanctions after U.S. President Donald Trump's pull-out from the Iran deal that threatens a fragile economic recovery after the July 2015 nuclear deal.

The U.N. special envoy, Staffan de Mistura, estimates that Iran spends $6 billion a year to sustain the Syrian regime. Iran has been facing continuous protests for the last few months where one of the most popular slogans is to end Iran's costly involvement in the Syrian civil war.

During the last four decades, Iran has consolidated the Shiite power in the region around Tehran, but now it seems to be losing its sheen. The Syrian civil war and its settlement is of great importance for deciding as to who will lead the region. Iran knows that the fate of the much touted Shiite crescent in the Middle East is aligned with that of the Assad regime in Syria. Apart from its huge financial burden, Iran's support for Syria has caused irreparable reputational harm in the eyes of Sunni Muslims.

Till a few years ago, Shiite Iran was able to transcend sectarian divides by appealing to popular outrage against the Israeli invasion of Lebanon. Today Iran is increasingly perceived by Sunni Muslims as a hypocritical, sectarian actor.Obviously, the four major players in the Syrian conflict: Russia, the U.S., Turkey and Iran have overlapping interests in the conflict. Russians would prefer to wind down the military conflict; the U.S. wants to carry on its hold east of the Euphrates; Turkey wants peace to return and the start of a political process in a unified Syria; Iran the prime backer of the regime wants Assad to remain in the helm of affairs under any situation. Suffice it to say that the big loser in Syria, of course, would be Iran, which has lost thousands of its best troops, numerous proxies and billions of dollars on the line to save a brutal dictator in Damascus. The bloody display of Iranian influence in Syria's civil war is slowly coming to the point of diminishing significance in the face of a dominant Russian, American and Turkish presence at the negotiating table.