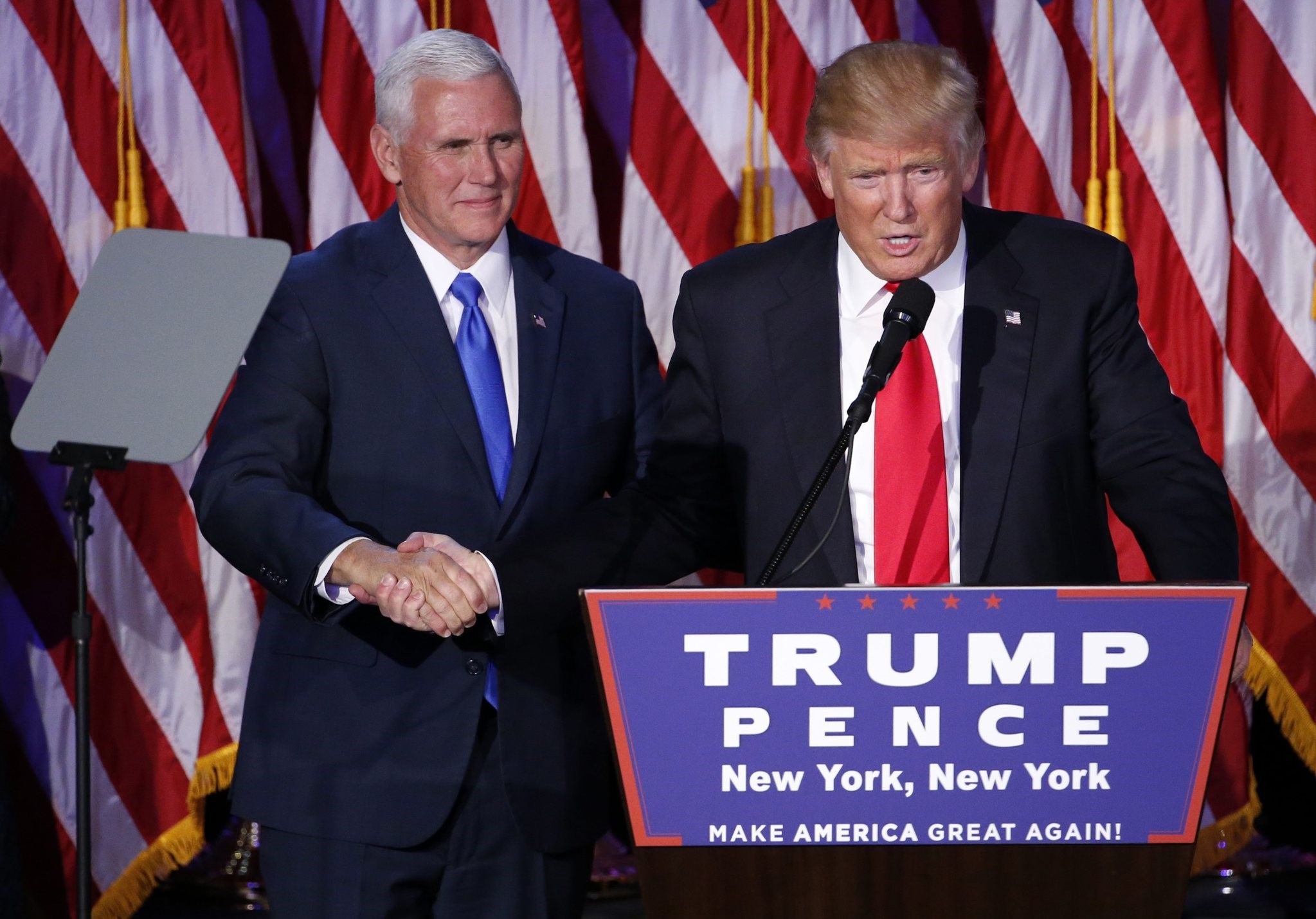 Then U.S. Republican presidential nominee Donald Trump shakes hands with running mate Mike Pence as he delivers a speech while the presidential votes continue to be counted, New York, Nov. 8, 2016.
by Talha Köse Aug 04, 2018 12:00 am

Turkish-American relations have been in a turbulent situation for the last five years. New issues that increase the tensions between the two countries are constantly being added to this difficult equation. Even the leadership change in Washington did not help improve relations between the two NATO allies. Unfortunately, certain issues in the last few months have overshadowed constructive steps and cooperation in the areas of defense and security, and these issues haven't been addressed properly.

Turkey has been complaining about Washington's continued support of the People's Protection Units (YPG) in Syria, which is a fundamental threat to Turkey's territorial integrity and national security. The two countries reached a deal over the withdrawal of YPG militants from Manbij, northern Syria. The Manbij deal was an important agreement, which has the potential to be extended to other parts of northern Syria, but there is still deep skepticism between the two parties.

The mastermind of the failed coup attempt of July 15, 2016, Fetullah Gülen, is still living comfortably in Pennsylvania in a well-protected compound while his network is running charter schools and other businesses in many parts of America. Gülen loyalists in the U.S. continue to threaten Turkish authorities on social media and on other mediums. No serious steps to constrain Gülen and his network have been taken, despite Turkey's official legal efforts. Washington's unwillingness to do anything substantive about Gülen creates serious feelings of disappointment, not only in President Erdoğan's administration, but also in Turkish society.

The threat of the U.S to embargo the delivery of F-35 Joint Strike Fighter planes because of Turkey's deal with Russia over the S-400 missile defense system is another sensitive issue that disturbs Turkey's security bureaucracy. The U.S. did not make any concessions or conciliatory moves in issues that have strategic significance for Turkey. There were new opportunities to start afresh after Turkey's June 24 presidential elections, but Washington did not change their approach in dealing with Turkey.

Washington recently decided to impose sanctions on two Turkish ministers, Interior Minister Süleyman Soylu and Justice Minister Abdülhamit Gül, due to pastor Andrew Brunson's detainment in Turkey. Brunson, living in Turkey for more than 20 years, is accused of helping the Gülenist Terror Group (FETÖ) – the secretive cult behind the July 15 bloody coup attempt. Brunson's legal process is continuing while he is under house arrest. Both U.S. President Donald Trump and Vice President Mike Pence threatened Turkey with sanctions unless Turkish authorities did not release Brunson immediately. Those threats were considered disrespectful reactions against Turkey's sovereignty and as threatening the rule of law in Turkey.

Such toxic language and threats are contradictory to the spirit of friendship and strategic alliances between the two countries. Turkish authorities condemned Washington's hostile moves but refrained from further escalating the tensions between the two countries. Back-channel diplomacy has been activated to prevent further escalation of tensions between the two NATO allies whose relations are already very tense. The foreign ministers of both countries are scheduled to meet in Singapore, and will most likely discuss the Brunson issue in greater detail.

Secretary of State Mike Pompeo has been involved in useful diplomatic contacts with his Turkish counterpart Mevlüt Çavuşoğlu. Committees from both countries have been working on the files to overcome the tension between the two allies. Despite facing some bureaucratic resistance, the committees have made some significant achievements in the last few months. The recent tensions over the sanctions are uncoordinated with the joint efforts of the diplomatic teams and have thwarted the achievements of the committees. It seems that the Brunson issue is being used for domestic political consumption in the U.S.

Pence is a member of the evangelical Christian community, and is being pressured by his community members for the release of pastor Brunson. Pence risked the United States' relations with its key strategic ally because of the expectations of his religious community.

President Trump also used a similar discourse of threats, like his vice president. President Trump expected to either gain a small victory with the release of Brunson or to gain popularity by further escalating tensions for protecting an American citizen.

Washington is aware of the fact that threatening the rule of law and sovereignty of Turkey will not be accepted from Ankara and such a move will be counterproductive for the release of Brunson. Despite their prediction, the Trump administration decided to move forward with the sanctions. Such an inconsiderate move not only exacerbated Washington's tense relations with Ankara but also worked against key national security interests of Washington.

The Trump administration risked the international accountability of the U.S. and their key national security interests, for some minor political gain from the Brunson crisis. Trump and Pence were expecting to be regarded as heroes with some success from the Brunson case. Indeed, the threats and the sanctions only widened the trust gap between Washington and Ankara. While the Trump administration was busy with the sanctions against Turkey the United States, European Commander General Curtis Michael Scaparrotti was meeting with Defense Minister Hulusi Akar and Chief of Staff Gen. Yaşar Güler. Scaparrotti was in favor of further deepening the strategic cooperation between the two countries. All these contradictory efforts demonstrate that Washington's steps in the Brunson case are not well planned and coordinated with other bureaucratic units.

Both countries will lose from a further escalation of tensions due to the Brunson crisis. The Brunson crisis seems to be a subject that is related more to domestic political issues for the Trump administration. Risking U.S. interests by threatening a key ally for the expectation of short-term domestic political gain does not conform to America's long-term strategic interests. The recent crises over the release of pastor Brunson do not seem to be a brief episode in Turkish-American relations. The other issues such as delivery of the F-35 planes or Washington's efforts to pressure Turkey over Iran sanctions or Washington's continuing support for the Democratic Union Party (PYD) is a part of a broader attitude problem of Washington in its relations with Ankara. Washington still tries to bring President Recep Tayyip Erdoğan and his administration onto its knees with such coercive political moves. There are still circles in Washington who are advising the Trump administration to insist on such a coercive policy against Turkey; however, such efforts backfired in the last several years and only deteriorated Turkish-American relations.

Washington has not gained much from such a policy but still insists on it because of the interests of certain lobby groups. The Turkish-American relations and strategic cooperation are more important than the short-term interests of narrow circles and interest groups in the U.S. It will be very difficult to fix the relations and rebuild the trust between the two countries, but it is still the most beneficial option for both countries.

Talha Köse is Brussels Coordinator and Society and Media Director at SETA Foundation. He is the chair and an associate professor of the Political Science Department at Ibn Haldun University.
Last Update: Aug 04, 2018 1:53 am
RELATED TOPICS