NSU trial: What's next in Germany's fight against racism? 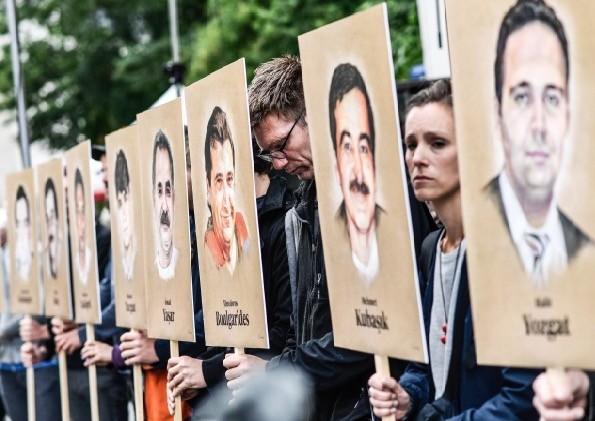 People hold banners with portraits of migrants murdered by the racist NSU group, in front of the higher regional court in Munich, Germany, July 10.
by Muhammed Ali Uçar Aug 08, 2018 12:00 am

The National Socialist Underground (NSU) terrorist group, established by a group of extreme rightists, killed 10 people between 2000 and 2007. The trial process lasted for five years and the court announced its decision on July 11, 2018 during the 438th session. The court's decision drew reactions from the relatives of those who were murdered by the NSU. Victims' families gathered in front of the court to protest the decision. What was so upsetting for the families of those who were killed? Why were the victim's families protesting in front of the court?

The NSU is a neo-Nazi organization that aims for an immigrant-free Germany. The court found Beate Zschäpe guilty of 10 murders and [being a] member of a terrorist organization and sentenced her to life imprisonment. According to German law, life imprisonment can be removed after 15 years in prison. Another four people received simple prison sentences between 2.5 and 10 years. This decision represents a national shame for Germany with even German Chancellor Angela Merkel saying that "the case is not over for me." Merkel also held a ceremony in 2012 to commemorate the victims of the NSU and promised victims' families to reveal the case's background and follow up with all aspects of the case.

The NSU case is the longest and most despised case in German history in the post-World War II period. Because NSU founders Beate Zschäpe, Uwe Bohnhard and Uwe Mundlos killed eight people with the same weapon, carried out two bomb attacks and 15 bank robberies, had not been caught for nearly a decade and because of that they were suspected of being associated with German intelligence.

Is the NSU an organization where only three acquaintances of the extreme right came together and massacred random people? Apparently this is what the court believes! However, given the history of Germany and the technology it has, it does not seem possible. How could the state, which gave weight to intelligence after World War II not open its eyes to Neo-Nazi organizations and prevent the killing of 10 people by three acquaintances?

It has been almost 10 years since the last of the NSU murders occurred and the answer to these questions, which many people do not care about in Germany, save for a few activists and the families of victims, is hidden in the chronology of the case.

Enver Şimşek was the owner of a mobile flower stall in Schluchtern, Hessen. He was gunned down on Sept. 9, 2000 in Nürnberg. He was the first victim of a series of murders perpetrated by the NSU. The police team in charge of investigating the incident investigated the case in the context of organized crime and followed Şimşek's family and relatives and monitored their phone calls. Police suspected that Şimşek may have been killed by the mafia for various reasons. In the course of the investigation, Şimşek's family were treated like suspects.

However, four murders took place the following 11 months. The most striking element of the murders was the weapon used by murderers was the same weapon used in the first nine murders. But the police were not able to find anyone using this gun. After each murder, the police tried to relate the crime to crimes committed by mafia and drug dealers; they were pursuing and questioning the victims' families by treating them as suspects.

The press downplayed the incidents using the term "Döne

rmorde – the kebab murders" and even racially described the murders. The Dönermorde statement was chosen by the Institute of German Language Studies as the worst expression of 2011, but it did not change the approach of the German press in ignoring the neo-Nazi motivations behind the murders and their use of racist language in their reporting.

Another important point in the NSU attacks was the murder of İsmail Yaşar, who was killed in Nürnberg on June 9, 2005 and was the sixth victim of the NSU. This was the third murder committed with the same weapon in Nürnberg and the first murder that had eyewitnesses. Eyewitnesses said that they saw two people on a bike when the murder happened. The eyewitnesses recognized one of the two people and noted that he saw the same person in the Mobese records of bomb attacks in a region inhabited by Turks in Cologne, a year before this murder. The police and the press did not see the case as a racist attack, but many claimed that the murder occurred due to Yaşar's "mafia and drug" links, like the case of the first victim Şimşek. Despite eyewitness reports, the police, who conducted the investigation, did not connect the dots between the bomb attack and the murder of Yaşar.

The last victim of the NSU's serial killings was Halit Yozgat. Yozgat, owner of an internet cafe, was murdered in his workplace. At the time of the murder, Andreas T. who is alleged to be a German intelligence agent was at the internet cafe. Andreas T. was known as the "little Nazi" in the city where he lived as he was a fan of Adolf Hitler and the Nazis. He said that he did not see the murder, but later records of a phone call between Andreas T. and Hessen's intelligence office came to light. One person from Hessen's intelligence office told Andreas T., "I tell everyone: If you know that something like that happens, then please do not go there."

This phone call following the murder of Yozgatlı shows that Andreas T. was working for intelligence and was aware of the murder. On the other hand, one of the NSU trio Uwe Mundlos, who committed the murders, worked under a false name in a construction service company owned by neo-Nazi Ralf Marschner between 2000 and 2002. It is thought that Uwe Mundlos was working for the intelligence as an informer from that region with a pseudo name and transmitting information to the intelligence agency. How else can an ordinary person work for a firm with a false name?

Uwe Bohnhard and Uwe Mundlos, members of the NSU, were found dead in a caravan after a bank robbery on Nov. 4, 2011 and claimed that they committed suicide. However there is still ongoing skepticism about whether the "suicides" were real or not. Beate Zschäpe almost never spoke during the trial and did not give any relevant details.

The victims' families, the NSU Watch committee and the community were not satisfied with the sentences and that only one person was sentenced to life imprisonment while the other four received lenient punishment.

It is necessary to give a special place here for Merkel's words "the case did not end for me." Merkel does not accept the outcome of the case and it seems that there is a will "to surpass" Merkel. Could it be that the some in Germany have begun to increase extreme right sentiments since the beginning of the 2000s to inflame xenophobia? The twin tower attacks on 9/11 in the U.S. were used to create anti-immigration and anti-Muslim opposition on a global scale, it seems that the NSU tried to escalate immigrant opposition in Germany.