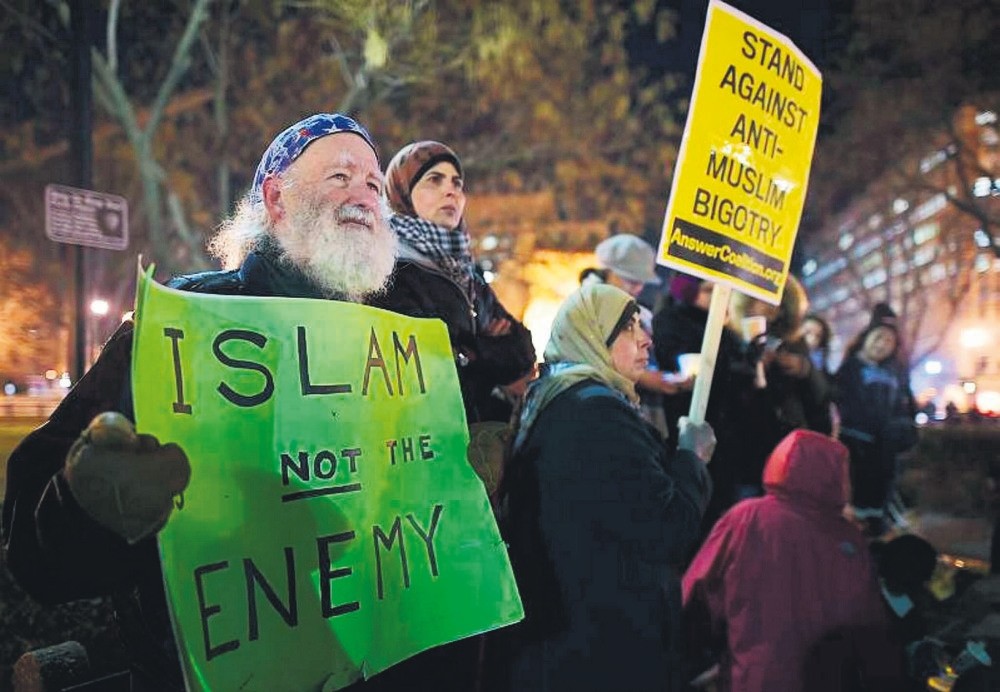 The words "I think Islam hates us," "True hatred among Muslims is too great," "Over 80 percent of mosques in this country are controlled by radical imams," "Sharia is incompatible with Western civilization" from prominent U.S. politicians, brand Muslims as un-American, unassimilable, and potential societal and security threats to the United States.

In the minds of the likes of President Donald Trump, Representative Peter King, and former Speaker of the House of Representatives Newt Gingrich, Muslims have an utter indifference to human life as well as to "American values." Clearly, the relationship between Islam, Muslims and American national identity has reached a boiling point. Separating fact from fiction is more important than ever.

The facts surrounding Muslims in America present a drastically different picture than the aforementioned claims by U.S. politicians. Muslims have lived on American soil before the United States even existed. The Founding Fathers of the United States welcomed the migration of Muslims to U.S. soil. American Muslims are far from monolithic and represent one of the most diverse religious populations in the country. Muslims are among the most educated populations in American society. Islamic organizations in the United States regularly participate in interfaith dialogue and civic national projects. Muslims are not responsible for the majority of terrorist attacks in America. U.S. Muslims do not prefer to be governed by Islamic law (Sharia). All of the preceding statements are facts. These facts are verified by the actions of U.S. Muslims as well as by research carried out by leading academic units and advocacy organizations across the country.

My new book, Muslims in America: Examining the Facts (ABC-CLIO, July 2018), presents evidence-based documentation to provide a full and impartial examination of U.S. Muslims, examining and critiquing the leading social and political narratives surrounding Muslims and the religion of Islam, including false or malicious claims about Muslims' actions and beliefs regarding 9/11, terrorism, religious tolerance, jihad, Sharia and other significant issues swirling around American society.

Despite the integration of Muslims into mainstream "American culture," they remain under the microscope. A community of individuals and organizations across the United States – popularly referred to as the Islamophobia industry – has dedicated energy and money to convincing Americans that Muslims adhere to "anti-American values" and that they should be discriminated against at an institutional level across the country.Leading U.S. Islamic organizations and experts on Islamophobia have traced the network's operations and their steady rise in influence, particularly during the 2016 presidential election. According to a joint report by the Council on American-Islamic Relations (CAIR) and the Center for Race and Gender at the University of California, Berkeley found that 33 Islamophobic groups had access to at least $205 million in total revenue between 2008 and 2013. Before the publication of that report, the Center for American Progress (CAP) flagged seven "charitable" foundations that spent $42.6 million between 2001 and 2009 to spread fear of Muslims in the United States and beyond.

In contrast to the Islamophobia industry, the pluralist vision of the Founding Fathers allows us to put the integration of U.S. Muslims into context. Primary documents reveal that George Washington, Benjamin Franklin, and Thomas Jefferson all encouraged the migration of Muslims to American soil. Writing as president in March 1784, Washington envisioned Muslims as future U.S. citizens in a letter stating: "[U.S. citizens] may be of Asia, Africa, or Europe. They may be Mahometans [Muslims], Jews or Christians of any Sect, or they may be atheists." One year earlier, Washington wrote in a letter to persecuted Irish Catholics in New York that the United States is "open to receive… the oppressed and persecuted of all Nations and Religions; whom we shall welcome to participation of all our rights and privileges."

Islamic organizations across the United States have repeatedly spoken out for freedom of religion and freedom of speech. Responding to the "Muslim ban," U.S. Representative Keith Ellison, the first Muslim ever to serve in the U.S. Congress, referred to the inscription on the Statue of Liberty: "Give me your tired, your poor, your huddled masses yearning to breathe free.' It doesn't say anything about a person's faith." Prior to the "Muslim ban," hundreds of U.S. Muslims issued a statement that "unconditionally condemned any intimidation or threats of violence directed against any individual or group" exercising the rights of freedom of speech, "even when that speech may be perceived as hurtful or reprehensible." Data and expert opinion have also revealed that Muslims have integrated into U.S. political culture by adopting mainstream ideologies, political party identifications, and policy positions held by longer-settled U.S. citizens. U.S. Muslims are much more likely to identify with or lean toward the Democratic Party than the Republican Party, which they view as being less friendly towards Muslims.

According to several studies published by the Pew Research Center, U.S. Muslims are highly integrated into American society. The overwhelming majority of Muslims in the United States, as reported by Pew, do not see a conflict between being a devout Muslim and living in a modern society. Pew added that by overwhelming margins American Muslims "are satisfied with the way things are going in their own lives and rate their local communities as good places to live."

That's why I had decided to pen such a book; in order to be an antidote to the ignorance and silencing of U.S. Muslims, defying and dismantling stereotypes but also inspiring new understandings to confront the Islamophobic narratives rising to the fore today.

* Faculty member in the Department of Sociology at Rice University in Houston, Texas