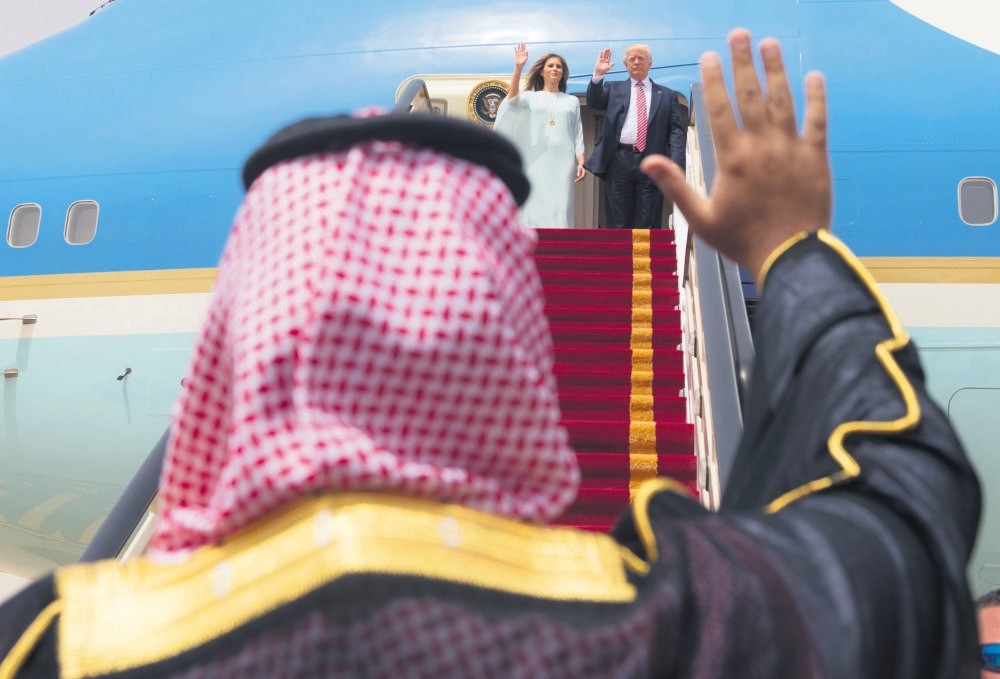 U.S. President Donald Trump and first lady Melania Trump wave to Saudi officials as they board Air Force One before leaving Riyadh for Israel, May 22, 2017.
by Markar Esayan Aug 29, 2018 12:00 am

The current operational rules of the global economic system indicate a flawed mechanism in which everything stands upside down but is treated as if were right side up. For instance, it is not easy today to get reasonable answers to the question of why China does holds nearly $1.2 trillion in U.S. bonds. China buys U.S. bonds and bills using its substantial trade surplus. The real return on these bonds is nearly zero. That means developing countries like China and Turkey are lending zero-interest loans to the U.S. In other words, countries much less affluent than the U.S. give the wealthy U.S. loans but get no profit in return. People wonder why some countries, especially China, do this.

China's choice has a rationale, of course. Strong dollar reserves are seen as an insurance to prevent any problem in repayment of external debts should an economic crisis occur. It is because other countries demand the payments for their exports be made in dollars because they themselves also do the same. It is called an "operating cost." Here, we are talking about a charge based on economic domain and currency ownership, similar to those inflated fees imposed by banks on small depositors annually or on transaction basis but on a much larger scale.

As you may remember, during former U.S. President Barack Obama's term, a bill that would allow families of 9/11 victims to sue foreign governments – essentially Saudi Arabia – was presented to U.S. Congress. The Saudi government vehemently objected to this and threatened to withdraw its U.S. investments. The threat had a tremendous impact because the volume of Saudi Arabia's investments in the U.S. is a much-cited issue. Some put it at $1 trillion, some at $3 trillion. Furthermore, some even claimed the U.S. economy totally relies on Saudi petrodollars.

Later, the U.S. Treasury Department made a statement and revealed that Saudi Arabia holds $123 billion of U.S. treasuries, making it the 13th largest foreign holder of U.S. debt. But investments by private persons were not included in that tally. When it comes to the Middle East, one can only guess how large unofficial figures stand at.

Change in the Kingdom

Yet, Saudi Arabia could not make such a move even if it wanted to. The Saudi riyal is pegged to the U.S. dollar and the U.S. Fifth Fleet patrols the Persian Gulf. Actually, Saudi Arabia has been a U.S. protectorate for the last half century. Indeed, after President Donald Trump's inauguration, a famous Middle East visit was launched.

The connections of Jared Kushner, Donald Trump's son-in-law, were debated. While Trump made his first foreign visit to Riyadh on May 21, 2017, he sent the new CIA Director Mike Pompeo to Saudi Arabia and Bahrain soon after taking office in January. Pompeo was given a red-carpet reception in these countries. Another turning point in advancing the Washington-Riyadh relations was the Saudi Crown Prince and Defense Minister Mohammad bin Salman's visit to the White House in March. In June 2017, Saudi King Salman appointed, in what was dubbed as a "soft coup," his 31-year old son Mohammed bin Salman as crown prince, replacing his nephew, Mohammed bin Nayef, as the first in line to the throne. While Mohammed bin Salman, who will ascend to the throne after his father, was appointed as prime minister, Nayef was removed from all his posts.

As it is seen, Saudi Arabia could not use its monetary power against the U.S. Besides, it had to buy hundreds of billions in weapons and agree to a succession change. To put it differently, monetary might is of no use within the established financial system. And the U.S. regularly consolidates this system through its hard power.

All these extraordinary developments in Saudi Arabia, including the administrative change, did not happen on their own. That change was compatible with Israel's goals in the region. The U.S. has launched a series of similar attacks against other countries, too. Trump has played to America's hard power and engaged in trade wars and sanctions against Europe, Russia and China. While doing that, it relied as much on its dollar-based global financial monopoly as on its army. Economic sanctions are seen as somewhere between hard and soft power. Considering the destructive effects of economic wars, however, they should also be viewed as hard power.

In fact, the U.S. has also threatened Turkey openly and ignored diplomatic niceties over the release of detained pastor Andrew Brunson. Later, it put its threats into effect by levying sanctions on two Turkish ministers. Following that, it imposed additional tariffs on Turkish steel and aluminum. But apart from these, there was an effort for the further depreciation of the lira against the dollar. The Turkish economy was directly targeted by its ally, with the message, "We don't have to obey any rules."

Turkey has not bowed down like Saudi Arabia, nor has its citizens rushed to the banks. Instead, a campaign to exchange dollars for lira gained momentum. Indeed, that's what annoyed the U.S. most regarding Turkey. James Jeffrey, the former U.S. ambassador to Turkey who was recently appointed as the U.S. representative for Syrian engagement, previously said in an interview: "Saudis and Egyptians fawn over us under all circumstances. On the other hand, [President Recep Tayyip] Erdoğan opposes us, tells our faults to our faces, not trying to be friendly with us. That's why Erdoğan is not liked in Washington and Europe."

In that interview, Jeffrey made another statement that can be used as a yardstick during the crisis over the detention of Brunson. Jeffrey said of Fetullah Gülen's, the leader of a shadowy cult, extradition: "Fetullah Gülen holds a green card. In other words, he is just a step away from becoming a U.S. citizen. As you probably know, the American government tried to prevent him from being granted this status, but its efforts backfired. Turks still believe that 'his green card can be canceled if the U.S. government demands.' No, we cannot cancel it. Only independent courts can do this. The judiciary is independent, and this is a pillar of our democracy. Since Turkey is unwilling to understand this fact, Turkish-American relations are headed for a very dangerous tragedy. It will be bad for the U.S. and a disaster for the Turkish people. Judging by the scenes with [Russian President Vladimir] Putin last week…"

Aside from dozens of documents and evidence submitted to U.S. authorities by Turkey, July 15 coup trials are nearing their conclusion. It was the U.S. administration itself that would clear the way for U.S. courts, whose "independence" Jeffrey clung to, but it chose not to do this. If U.S. courts are independent, what are ours? Kangaroo courts? Which pillar of U.S. democracy allows for "ordering" Turkey's executive branch to put pressure on the judiciary regarding Brunson's release? And, of course, let's not forget about that warning in the end, "It will be a disaster for Turkish people."

This is as if Jeffery was foretelling the currency manipulation and other sanctions during the Brunson crisis.

In contrast to the Saudis, Turkey's refusal to bow down in this economic war has led to the questioning of the global financial system across the world. That trend had already started but, contrary to U.S. expectations, Ankara was not left alone in this row and even got strong support. It's because everyone suffers to a certain extent within this system. In his extremely interesting book "The Ascent of Money," Niall Ferguson wrote: "Money is a matter of belief, even faith: Belief in the person paying us; belief in the person issuing the money he uses or the institution that honors his checks or transfers. Money is not metal. It is trust inscribed. And it does not seem to matter much where it is inscribed: On silver, on clay, on paper, on a liquid crystal display. Anything can serve as money, from the cowrie shells of the Maldives to the huge stone discs used on the Pacific islands of Yap."

By launching an economic assault on Turkey, the U.S. has shaken the confidence in itself and its currency. In a world where dollars gush out everywhere and are used as bullets, what country can feel safe?

Late U.S. President Harry Truman said when the new world order was underway after World War II, "We all have to recognize, no matter how great our strength, that we must deny ourselves the license to do always as we please."

Has the U.S. lost the wisdom of its founding fathers and Truman? If so, this is not good news. For the health of the U.S.' democracy is important for the whole world. We do not want to live in a world caught between anti-Americanism and American hegemony. That would not benefit Americans, either. The U.S. is valuable and should care about this value first. And it can be maintained only by promoting and improving justice and democracy.

The U.S. can continue to be great only through this.