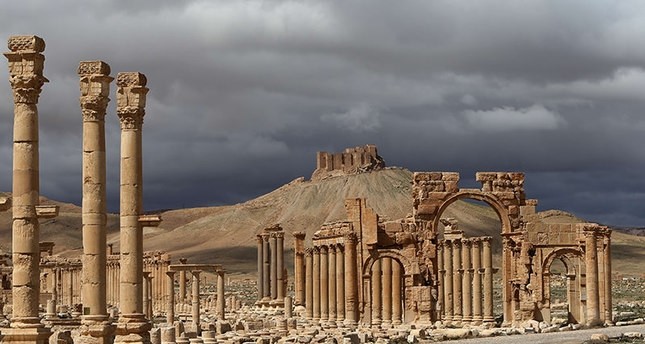 A partial view of the ancient city of Palmyra in March 2014, one year prior to its seizure and destruction by a group of Daesh terrorists advancing through northern Syria near the Turkish border.

In the midst of imperial wars and years of deadly conflict between outlawed groups, the Mesopotamian and Anatolian lands have also found themselves exploited by smugglers, who pillage their ancient assets to sell to collectors around the world

Historical and cultural assets, as the common heritage of mankind, have been of the utmost significance throughout history; therefore, they should be preserved in a very careful and professional manner and protected from being sold and lost on the black market.

We hear about trade – actually smuggling – stories from around the world, but most recently from the Middle East, a region stuck in perpetual clashes between non-state armed groups and world powers. The Middle East witnessed the birth of civilization, was home to numerous empires and states, and can be described as one of the most culturally rich places in the world.

Sadly, today if a country is culturally rich and economically poor, it becomes an easy, open target for smugglers.

One of the most well-known smuggling incidents happened few years ago in Syria's Palmyra city. The 2,000-year-old Semitic metropolis, included on UNESCO's World Heritage List, was destroyed and seized by the bloodthirsty members of the Daesh terrorist group. Following its capture, its cultural and historical assets were brutally looted and sold by smugglers to rich countries. The footage of the deadly actions of Daesh fighters in historical Palmyra is still fresh in our minds.

Since the first days of the Syrian civil war, the growing involvement and emergence of barbaric terrorist organizations have made Syria a hub for smugglers and looters. Reportedly, Syrian assets dating back to ancient times are still being sold to collectors worldwide. Just a few years ago in Aleppo, Syria's largest province, almost 600 medieval manuscripts and astrological tools were sold to Western collectors by a group of "Syrian" academics who introduced themselves as antique dealers.

Located in ancient Mesopotamian and Anatolian lands and home to numerous civilizations and heritage over the centuries, Turkey, like other regional countries, is also a popular spot for smugglers and collectors. Throughout history, Turkish lands have been home to some of the world's greatest civilizations, including the Roman Empire and the Ottoman Empire, meaning the cultural and historical assets in its borders are widespread and numerous.

Many of the notable cultural assets stolen from Turkish territories and sold by smugglers to foreign collectors have yet to be returned, including: The sculpture of the Old Fisherman and the Pergamon Altar in Berlin, the Nereid Monument at the British Museum, the Three Graces Mosaic at the Louvre in Paris, the Gold Crown of Hecatomnus, Kilia Idol put on sale by Christie's auction house and the mosaics smuggled from Zeugma which are now at Bowling Green State University in the U.S.

Nonetheless, Turkey is one of the most successful countries in terms of the repatriation of cultural heritage. For instance, the Culture and Tourism Ministry has so far facilitated the return of the Lydya treasures, Aphrodisias assets, a bronze vase, the Sarcophagus of Heracles, Byzantine and Roman coins and the Boğazköy tablets and sphinx. The ministry has continued to pursue other remaining assets in foreign museums and collections and cooperates with UNESCO officials regarding such issues.

The repatriation of cultural assets smuggled to foreign countries is not an easy task since it is hard to legally document ownership; therefore, Turkey's efforts to retrieve its own historical and cultural heritage, with pieces still in Germany, the United States, Italy, France, Denmark, Britain and so on, are ongoing via legal and diplomatic routes.The most significant agreement in the matter, in which Turkey is also one of the parties, was signed by UNESCO in 1970 – namely the Convention on the Means of Prohibiting and Preventing the Illicit Import, Export and Transfer of Ownership of Cultural Property. The parties of the convention are generally the countries that export cultural assets, are economically weaker and are categorized as rich sources in terms of historical property.

Basically, the 1970 UNESCO convention requires all parties demanding the repatriation of any assets to prove ownership by producing an official cultural inventory.

If artifacts are registered in an official inventory, the repatriation process often goes smoothly because any information or document related to the asset helps prove its origin; however, a lack of documentation makes the point of origin very hard to prove in court. The common legal rule of non-retroactivity, which means a law, rule, decision, etc. is not able to be applied to dates before it was made, complicates matters even further. It is generally impossible to apply to UNESCO for the return of Turkish assets, particularly coming from the Ottoman Empire and Seljuk eras due to lack of documentation; therefore, it can be said that, according to this convention, the countries that do not have proper, detailed inventory documents are unable to claim ownership of their own cultural and historical assets smuggled to other countries. Nevertheless, the convention does allow countries to solve such issues via bilateral negotiations and diplomatic meetings.

In 1995, another agreement, called the UNIDROIT Convention on Stolen or Illegally Exported Cultural Objects, was signed in Rome. According to this new convention, officially recognized by UNESCO and described as an agreement that fills the gaps of the 1970 UNESCO convention, the rules of the repatriation rights and process are determined in more detailed manner. However, Turkey is not a party of the convention, yet.

Shortcut toward a solution

However, filing a suit for the repatriation of cultural assets is actually the last step. Despite the fact that international legal procedures do not require countries to demonstrate ownership with inventories, the local courts of countries that contain such "smuggled" assets are free to apply their own decisions and they generally decide against the contesting parties.

As a result, the local laws of the related country need to be taken into account, as well. A high-profile commission that will only focus on protecting and looking after cultural heritage and assets should be established as soon as possible since the present commission in the ministry has a number of other tasks it is required to look after. The biggest purpose of the commission to be formed should be to seek the return of Turkey's cultural assets through legal, political and diplomatic processes.