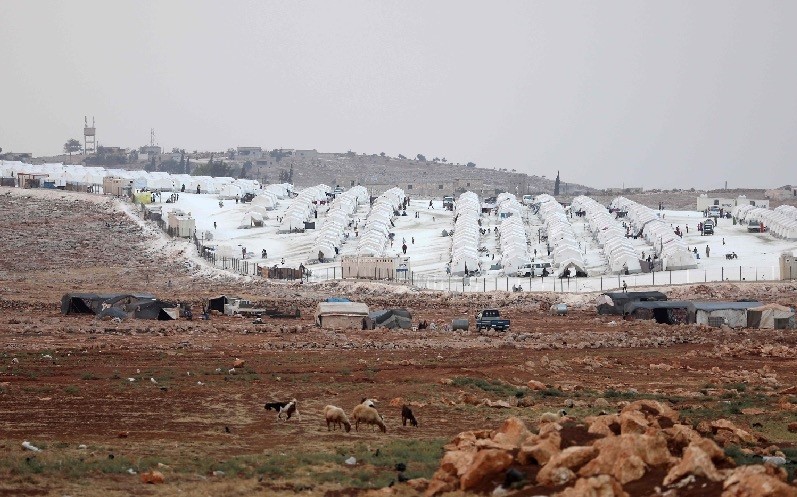 The refugee camp in the Syrian village of Kafr Lusin, north of the Bab al-Hawa border crossing with southern Turkey, Sept. 13.
by Talha Köse Sep 18, 2018 12:00 am

Turkish-Russian relations were strained after the downing of a Russian fighter jet that had crossed over Turkey's border with Syria in November 2015. Despite disagreements over the civil war in Syria, relations between the two started to normalize after Russia's support for Turkey's elected government in the aftermath of the failed coup attempt on July 15, 2016. While Turkey's NATO allies and European counterparts remained quiet following the failed coup attempt, the Russian side openly supported President Recep Tayyip Erdoğan and Turkey's elected government. The two countries managed to normalize their relations gradually and overcame tension related to their disagreements regarding Syria. The trust between the leaders of the two countries played an important role in the rapid normalization of the relations. The Idlib crisis has become an important test for the strategic partnership.

Cooperation in the energy sector was critical for mutual strategic and economic interests. The Russian side increased its investments in Turkey's energy sector. Collaboration between the two countries has also extended to the military sector, as well. Turkey's decision to purchase the S-400 missile defense systems was critical, despite the fact that it irked some of Turkey's NATO allies. This step was Ankara's first strategic arms deal with Moscow in a long time. Despite criticism, embargo threats and political pressure from the U.S. for the delivery of F-35 jets, Ankara refused to back out of its S-400 deal with Russia. The S-400 system is strategically valuable in the partnership and may have a long-lasting effect in the coming years.

Normalization in the two countries' relations has played a significant role in the mitigation of the conflict in Syria. The two, with Iran, initiated the Astana talks to reduce the military clashes between the Syrian regime and opposition groups. The formation of four de-escalation zones – namely Idlib province, the Rastan and Talbiseh enclaves in the northern Homs province, eastern Ghouta in Damascus' northern countryside, and Deraa and Quneitra – was a very important step for the protection of civilians and reducing the tension between the Syrian regime and the armed opposition.

The trio even agreed to exclude of the Nusra Front and Hayat Tahrir al-Sham (HTS). With the help of Russia and Iran, the regime gained control over the majority of the eastern parts of the country. The armed opposition remained concentrated around Idlib province, located on the southern border of Turkey.

Turkey aimed to dissolve and demobilize radical factions and transform them into moderate actors. At the same time, Turkey also hoped to increase the moderate opposition's control of Idlib by strengthening it against HTS elements. However, the regime, backed by Russia and Iran, had different plans. The Russian side has been complaining about the opposition attacks on its Khmeimim Air Base, Latakia and Aleppo and expecting Turkey to deal with the HTS threat. Russian complaints have provided the regime the golden opportunity to attack opposition factions, including the moderate ones. The regime also wants to push civilians toward Turkey's border and prevent internally displaced citizens and refugees from returning to the Idlib region. Along with Iran, Russia is backing the regime's plan to take control of the area.

The regime's attacks on Idlib may have serious consequences for Turkey as well as Europe. Such attacks may lead to new humanitarian crises and trigger a new wave of refugees fleeing toward Turkey's borders. Turkey may also lose its influence over the moderate opposition if it cannot maintain the secure zone for the civilians. The regime's Russian-backed attacks also contradict the overall logic of the Astana deal. Turkey's position in Afrin and the area cleared by Operation Euphrates Shield may be weakened if the regime pushes civilians to those areas.

The Turkish-Russian strategic partnership is important for the energy sector and the S-400 missile deal, but it still may not pass the test in the Idlib crisis. Turkey, Iran and Russia were unable to reach a diplomatic deal in Tehran. Turkish decision makers and the public started to feel that their fundamental national security concerns were not being taken seriously by Russian and Iranian counterparts. Turkey's tense relations with the U.S. over the last couple of months have also weakened its negotiations vis-a-vis Iran and Russia.

Turkish, Iranian and Russian leaders and diplomats are still trying to find a common ground to overcome the Idlib crisis. If the parties are able to reach a deal and find a solution to the tension, it will be an important diplomatic breakthrough. If the deal is postponed and a humanitarian crisis erupts in Idlib, it may mark an important turning point for Turkey's perception of Russia and Iran as strategic partners in the region. In that case, Turkey may continue to strengthen its economic ties and joint ventures in the energy sector but refrain from moving forward in other geopolitical areas. Despite the differences over how to deal with Idlib, there is still cautious optimism on all sides because of the possible ramifications of a diplomatic failure.