Social democracy has failed in Europe 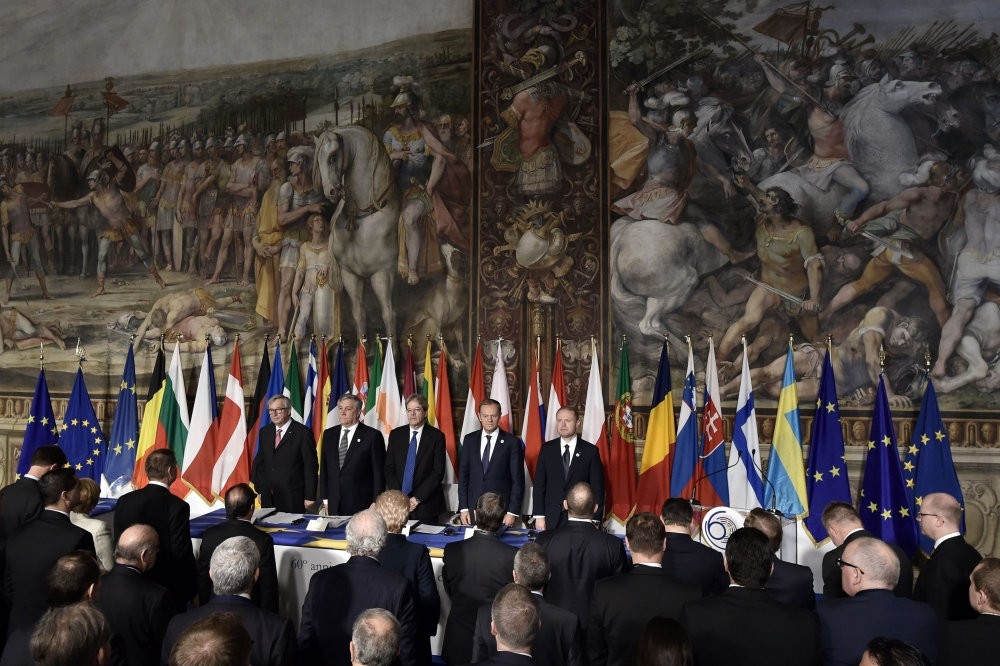 EU officials stand with the leaders of 27 European Union countries during a summit of EU leaders to mark the 60th anniversary of the bloc's founding Treaty of Rome, at Rome's Piazza del Campidoglio (Capitoline Hill), March 25, 2017.
by Jurgens Klaus Oct 11, 2018 12:00 am

Once Europe's social democrats and moderate socialists alike were known for their household names and were much-cherished leaders. One would admire politicians and statesmen such as Willy Brandt, François Mitterrand and Felipe Gonzales, to name only some of their most popular leaders. They would become the symbol of a new era, a new generation, a better and more social, fairer and much more democratic society. This held true from the 1970s until the mid-1990s.

Thereafter and whilst the center-left was still part of a government in two-thirds of all European Union countries at the start of the new millennium – either in a coalition or as stand-alone administration – this figure would drop dramatically to at one point – seven out of 28 (25 percent) – with a slight upturn noticeable today where we see the center-left involved in 11 out of 28 governments.

Yet in five of these 11 administrations center-left parties are only part of a coalition and do not hold the top positions such as the post of prime minister. Even worse, these numbers do not automatically reflect on votes obtained at the ballot boxes – with where they are in government, they more often than not hover around only the 20 to 25 percent mark.

Let us address a number of pressing issues in order to better understand this decline from a majoritarian powerhouse to often nothing but kingmakers, if at all.

First, is social democracy in Europe in decline manifested by recent election results because there are no more visionaries in their ranks but mostly technocrats?

Second, have societies changed and became more center/center-right per se; in this context, did allowing for the transition from working class to middle class make any decidedly left-looking ideology basically obsolete as former members of the working classes no longer need a "class struggle" party?

Third, have center-left ideologies failed in general as the "more government, the better" only worked for so long?

But all is not that easy as a fourth point must be discussed: if social democracy simply outlived itself for any of the above stated potential reasons and if one would subscribe to this theory, why would conservatism not become the one and only ideological alternative? What makes extreme left and right parties, respectively, so attractive?

And last but not least, are Europe's right-wing parties only on the up because left-wing policies failed? Yet, "right from the center-right" movements spring up everywhere even in countries where a center-right party governs.

Post-war western Europe was in principle solidly anchored in two competing major ideologies: On the one hand Christian democracy/conservatism and on the other hand social democracy and moderate socialism. Over time the liberals often made it into national and regional parliaments, too, but mostly as kingmakers scoring seldom above the magical 10 percent mark. The Greens were a much later occurrence.

Not that post-war societies embraced social democracy from the onset; those European nations had always had a rather small conservative and traditional outlook. But the moderate left came to power, eventually, with the German Federal Republic, France as well as the United Kingdom as perfect examples. But it had been an uphill battle as two reasons made it easier for the center-right to score big at the ballot box: First, post-war Europe needed an economic recovery, which at the time was the hallmark of the conservatives, and second, as extreme socialism and even communism was forced upon eastern Europe including the German Democratic Republic (DDR) convincing the electorate that social democracy and mainstream socialism could actually work out for democracy and economic welfare was initially a non-starter.

The ascent of social democracy

It is perhaps a somewhat risqué comment to make but it does have something going for it in particular when evaluated from a baby-boomer generation perspective. What one could be arguing for is that once postwar Europe had become a model for peaceful coexistence and welfare and economic stability topics close to the heart of the center-left became electable much more easily. You had a democracy but it was not flawless hence Willy Brandt suggested, "Let us dare more democracy," back in 1969.

At the same time economic stability was often perceived as being overly capitalistic hence social issues such as fair wages, maximum working hours and workplace health and safety became hot picks. We remember François Mitterrand wearing a leather jacket standing on a beach and declaring that socialism is an idea that will find and will make its way during the 1981 presidential election campaign which he won. Hence there was a place for moderate socialism all over Europe and the fact that there was European politics coming to the foreground allowed for the concept of international solidarity as is omnipresent in center-left movements anyways.

Can social democracy be revived?Any left-leaning party will appeal to the masses in order to win at the ballot box. Hence there is automatically a certain level of populism inherent in center-left ideology. In order to condemn populism one basically needs to be populist oneself, a classic Catch-22 situation.

The trick would be to appeal to the common sense of the ordinary voters instead of making them more xenophobic. At the same time the moderate left must come up with logic scenarios for how to govern fully functioning market economies without ever resorting to the "big brother" type "the state does (and pays for) everything" approaches.

The middle classes that social democracy created herself no longer want ideology but lean government based on democracy and fair treatment. If the left continues to resort to what they perceive as the good old times they miss the boat for good.

Today's social democracy underperforms because the transition from an ideological force to a mainstream power center has not been correctly mastered. Social democracy was once likened to a supertanker, in a sense of it takes ages to change direction.

The picture looks bleak indeed. More and more voters disenfranchised from either too much government under left parties or no government under right parties can easily be convinced to try something new. Fringe parties modeling themselves as viable "moderate" alternatives gain ground and considerably so, yet they are far from being moderate.

Coming back to my initial question of whether or not social democracy failed Europe the answer should be "no." It was a vital force in the second phase of creating a prosperous and peaceful European house so to speak. But it did not adapt to changing voter preferences and did not really understand the demands of the ever growing middle classes who want nothing but stability, and little if any, societal experiments. A sad fact, as after all it was social democracy which made a European middle class happen in the first place.

Social democracy could promote a kind of "socialism light" which accepts the fact that European societies are no more black and white (either you work or you employ) and are very diverse indeed. However, this seems to be rather unlikely overnight and even more so as past visionaries have since long been replaced for good by mere technocrats in grey suits. But it is neither impossible nor unwanted, it would be a very welcome sign in order to develop societies further.