US-Gulf relations: The past, present and future 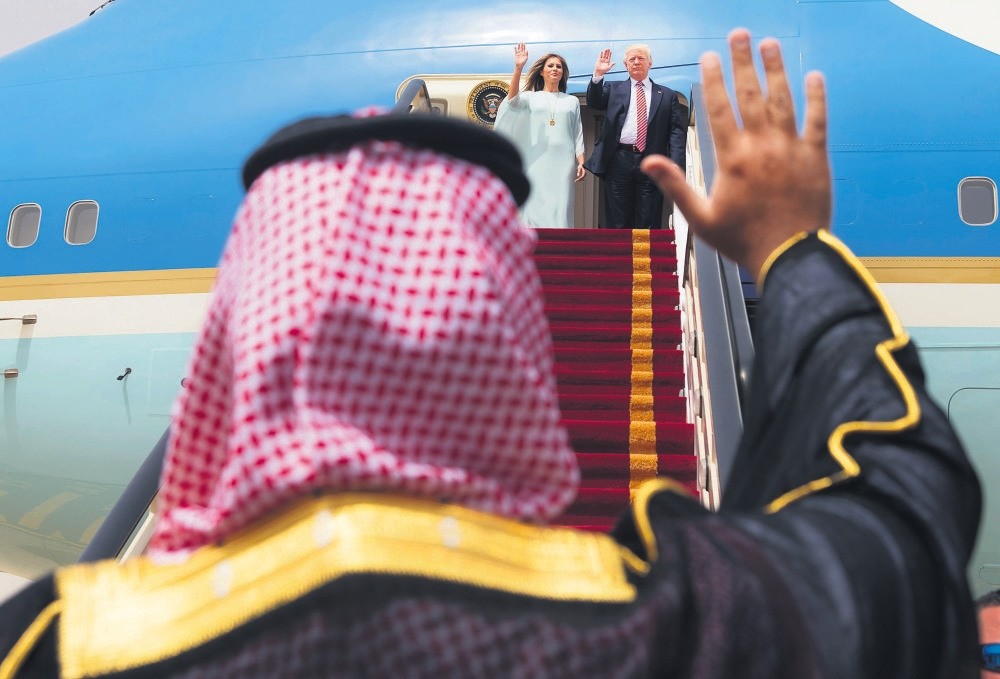 U.S. President Donald Trump and first lady Melania Trump wave as they board Air Force One before leaving Riyadh for Israel, May 22, 2017.
by Feyza Gümüşlüoğlu Nov 16, 2018 12:00 am

The Gulf states are aware of the changing global balance of power and working to develop closer relations with China, Russia and India. Yet, these powers are still unwilling and incapable of replacing or even challenging the U.S. as a superpower

Bandar bin Sultan Al Saud, a Saudi prince, once described the relationship between the U.S. and Saudi Arabia as a "Catholic marriage." Another Saudi prince, Turki bin Faisal Al Saud, suggested instead that it was a "Muslim marriage." Whatever these two, once powerful, princes meant, both, however, agreed that it was a marriage. Saudi journalist Jamal Khashoggi's killing in Saudi Arabia's Consulate in Istanbul and the U.S.' unwillingness to take action against Saudi Arabia proved how special the relationship between the two countries is. The U.S. actually has a special relationship with all neighboring Gulf states: Bahrain, Kuwait, Oman, Qatar and the United Arab Emirates (UAE). This is in large part due to the indispensable role the U.S. plays in the security of these states. Why is this the case? And, is it sustainable in the medium-to-long term?

The irrefutable reality about the Arabian Peninsula is that it is a desert. Historically, it had always been poor in economic resources, attracting not much of the great powers' attention. The peninsula is surrounded by the Indian Ocean in the south, the Persian Gulf in the east and the Red Sea in the west, each of which has always been, and still is, critically strategic for international trade. Throughout history, successive land and sea empires have shown interest and wasted resources to impose their control over these seas and keep their rivals out. As long as no threat to international trade came from the peninsula, the great powers left the peninsula in the hands of the native rulers and organized punitive measures only. As Stephen Longrigg, a former British military officer stationed in Iraq, put it, the desert formed the peninsula's first line of defense and its inhabitants enjoyed the safety of the undesired.

Only with the discovery of oil in the southern shores of the Gulf did the peninsula acquire great strategic significance for the superpowers. The native rulers of the peninsula welcomed this new superpower attention and eventually came to work closely with them. To the ruling families of Kuwait, Bahrain, Qatar, the UAE and Oman, for example, Britain provided protection against external threats, support against internal rivals and guidance in their development projects. Saudi Arabia had been more self-sufficient than the others but still developed cordial relations with the United States, especially after World War II. Britain officially withdrew from the Gulf in 1971, leaving the region under the influence of the United States. Yet, the U.S. had not initially shown any interest in keeping any military presence in the Gulf, instead relying on Iran and Saudi Arabia to keep the Gulf stable and secure.

The year 1979 brought the Iranian Revolution and the Soviet invasion of Afghanistan and so threatened the U.S. hegemony in the Gulf that then-U.S. President Jimmy Carter had to declare in what came to be known as the Carter Doctrine: "An attempt by any outside forces to gain control of the Persian Gulf region will be regarded as an assault on the vital interests of the United States. It will be repelled by use of any means necessary, including the use of force."

A dramatic escalation in the U.S.' role in the security of the Gulf came in 1990, when Iraq invaded Kuwait. The invasion made it painfully clear that Gulf states could be easy prey for their more populous neighbors. Even Saudi Arabia found itself exposed and invited the U.S. to defend its territories against a plausible Iraqi invasion. It was the U.S.-dominated international coalition force that expelled Iraq and saved Kuwait's independence. In the aftermath of the Gulf War, all Gulf states rushed to develop stronger military relations with the U.S. With the exception of Saudi Arabia, all signed bilateral security treaties with the U.S. Saudi Arabia, however, tremendously increased its military spending from the U.S. Consider that according to the U.S. State Department, while Saudi Arabia spent merely $417 million on its military, Iran spent twice that amount, $833 million, in 1970. Two decades later, however, Saudi Arabia was spending four times, $23.1 billion, what Iran was spending, $5.2 billion, on its military. Today, Saudi Arabia is among the top spenders on its military. It was ranked third after the U.S. and China in 2017 and fourth after the U.S., China and Russia in 2016.

To see the full picture it must be noted that the Arab Gulf states have to rely on a superpower for their security. This is because they control significant oil reserves and can provide living conditions for their citizens well above regional and world standards. But, they have sparse populations, around 40 million people live in these countries, and therefore cannot keep large armies. In the mid-2000s, Bahrain, Qatar and Kuwait had 11,200, 12,400 and 15,500 troops, respectively, while Oman and the UAE had 41,700 and 50,500 troops, respectively. The largest country, Saudi Arabia, had 199,500 troops. With these small forces they cannot defend themselves against their more populous neighbors, such as Iran, Iraq or Egypt. Even Yemen or Somalia, with their larger populations, could pose serious security threats if the two were not weak states.

The Arab Gulf states therefore rely on a superpower for their security and that superpower has happened to be the U.S. in the last half a century or so. The question is: How long can this situation continue? Obviously, it in part depends on the willingness and capacity of the U.S. to serve in this capacity. The U.S.' willingness to serve as the gendarmerie of the Middle East is visibly in decline as it came under tremendous financial strain after its invasion of first Afghanistan in 2001 and then Iraq in 2003. For this very reason, in fact, the U.S. has avoided a similar level of involvement in Libya and Syria and gave other states, such as France and Russia, free reign in these two countries. The U.S.' military capacity might be unmatched, but how smart it is in using that power is questionable as the U.S. left the mission it set out to achieve in Afghanistan and Iraq largely unaccomplished and seriously undermined its own credibility.

Another development is that the U.S.-dominated unipolar world is slowly giving way to a multipolar world with the economic rise of China in the Far East and Russia's resurgence as a military power. China also spends tremendous sums on military and is therefore working to catch up with the U.S. Most likely, in the near future, India will also be a serious contender for superpower status.

The Gulf states are in fact aware of the changing global balance of power and working to develop closer relations with China, Russia and India. Yet, these powers are still unwilling and incapable of replacing and even challenging the U.S. as a superpower. In the foreseeable future, therefore, the Arab Gulf states will continue to rely on the U.S. for their security. But, given that the U.S. is becoming more and more unwilling, Arab Gulf states have to devote more and more resources to lure the U.S. into playing their security provider and even might be forced to take matters into their own hands. Given how miserably the two largest military powers in the Gulf, Saudi Arabia and the UAE, failed in defeating the Houthis in Yemen raises serious questions as to the sustainability of the self-help system in the Gulf.

* Turkish journalist and author, formerly based in Doha, Qatar