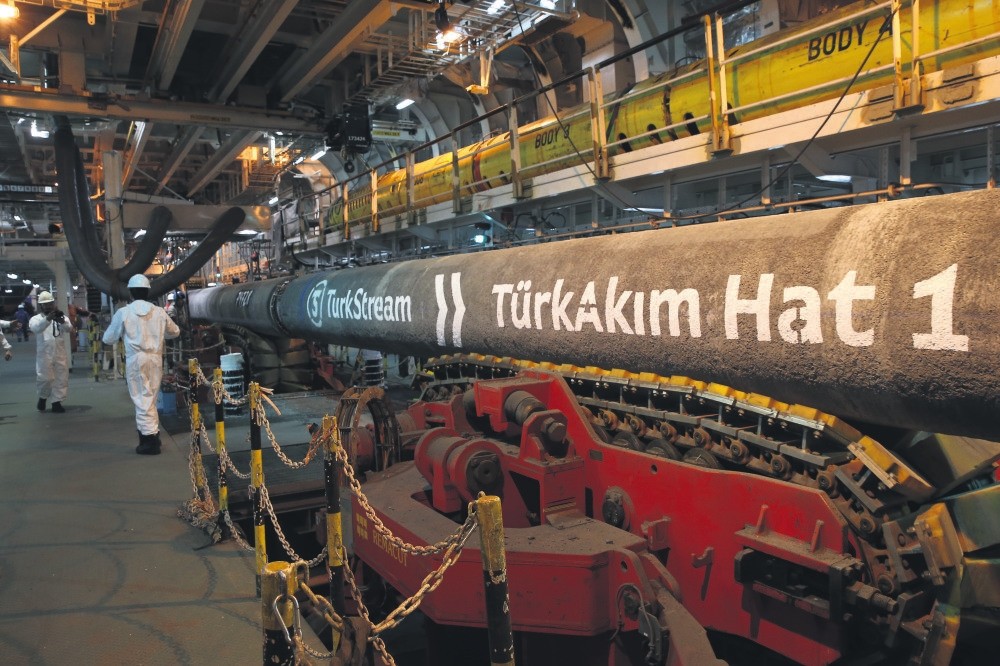 Nearing its completion, the TurkStream project is believed to have the potential to impact the whole architecture of the global gas supply market, while establishing Turkey as an energy hub for EU countries.
by Maria Beat Nov 20, 2018 12:00 am

Turkey and Russia have taken another step forward in cooperation. The completion ceremony of the sea section of the TurkStream natural gas pipeline took place in Istanbul yesterday.

"We are to witness an event of historic dimension: A project brought to life to become a symbol of successfully progressing Russian-Turkish cooperation is in the process of implementation," the Russian Ambassador to Turkey Aleksei Erkhov shared with Daily Sabah.

"The importance of the TurkStream pipeline project is next to impossible to overestimate. No doubt, it'll contribute to building stronger cooperation of our countries within a highly important energy sector," the ambassador added.

TurkStream is a transit-free gas pipeline that will cross the bottom of the Black Sea on the way from Russia to Turkey. After the pipeline is commissioned, it'll take 52 hours to directly deliver gas from Russia's Anapa on the Black Sea to Kıyıköy in the Kırklareli province in northwestern Turkey without the bottlenecks and constraints of passing through the transit countries. The natural gas transmission will be monitored from a state-of-the-art control point at the headquarters of the TurkStream project company in Amsterdam, the Netherlands.

"It's of no less importance that the TurkStream pipeline is being built at a record making speed," he continued. "I'd like us to recall that an agreement to lay down the pipeline was signed in October 2016 thanks to the effort contributed by our country leaders who immediately took the project implementation under their personal control."

The initial TurkStream accord, reached by the presidents of Turkey and Russia in Ankara on Dec. 1, 2014, was mainly unexpected by the world at large and generated certain skepticism as for the feasibility of the project's implementation.

Today, as it nears its completion almost four years later, the project is believed to have a potential to impact the whole architecture of the global gas supply market, while establishing Turkey as an energy hub for EU countries. The completion of the TurkStream sea section construction will further boost Turkey-Russia energy relations and impact the global trends of natural gas supply.

The mega pipeline is to consist of two 930-kilometer submerged connectors with capacity to pump 15.7 billion cubic meters (bcm) of gas per year each. The first line, which is almost complete, is intended for gas supply to Turkish consumers, while the second line will take the Russian gas further on to south and southeastern Europe passing through Bulgaria and Serbia or through Greece and Italy. The construction of the overland section of the TurkStream's second gas line is due to start in 2019, while the overall construction will be completed by the end of 2019 as planned.

The idea to build the TurkStream pipeline came to life in the aftermath of the conflict-prone South Stream project's closure. At the time, Russia was determined to remain a reliable gas supplier to European markets; hence it dramatically changed its alliance with EU countries in favor of Turkey.

Some experts believe that the TurkStream pipeline project has good potential to be grounded better economically in comparison with the aborted South Stream project, which was motivated by the Russia-Ukraine conflict and not economic necessity. Not an EU member-country, Turkey is in a position to demonstrate better flexibility in the energy matters that Russia never came to terms on with the EU.

A gain for the gas giant Gazprom and masterminded by the Russian energy policy makers, TurkStream is to contribute to building the image of Turkey as an energy hub for the natural gas deliveries from Russia, the Caucasus and Middle East to EU consumers.

Upon its commissioning, Turkey will benefit as a player at the gas market with potential to control gas deliveries to Europe from Russia, Iran, Azerbaijan and possibly Iraq while building a superior position in the regional energy supply market.

While the commissioning of TurkStream may further burden Turkey's energy dependence on Russia, the project has a potential to add a new element of cooperation to the established relations of the seller and buyer through joining efforts in energy supply to the third markets. This will change the nature of the long established interaction and contribute to the countries' building relations of a strategic partnership.

For Russia, the commissioning of TurkStream opens a new export corridor for its gas heading to the EU while balancing safe deliveries of Russian gas via the northern route. It is to positively impact Russia's image as a reliable gas supplier to international markets, while expanding its export capacity to the EU countries by roughly 15 bcm of gas per year.

Turkey is historically an energy-dependent country although it neighbors the gas and oil rich countries of Iraq and Iran. The country itself is short of commercial deposits of natural gas and relies on imported gas almost totally. Turkey has been a major importer of Russian gas since the ‘80s and relies by close to 60 percent on the Russian gas deliveries.

During the past 15 years, Turkish energy policy has experienced an impressive change and diversification of energy sources resulted from this. Turkey's natural gas imports were expanded by contracted deliveries from Azerbaijan and Iran in parallel with an increase in volume of Russian gas deliveries.

Iran comes second after Russia as natural gas exporter to Turkey, accounting to a 10 percent share of the market by pumping about 10 bcm a year in line with their 1996 contract agreement. The South Caucasian pipeline from Baku to Erzurum was commissioned in March 2007 to deliver natural gas from Azerbaijan to Turkey, and its annual capacity is eventually expected to reach 30 bcm. As a result, the Azeri share of the Turkish gas market will continue to increase and its market position will grow stronger, while the anticipated diversification of Turkish gas imports will receive an additional boost.

When operational, TurkStream will have a potential to replace capacities of the Trans-Balkan pipeline, referred to as the Western Corridor, which was laid down in the ‘70s to launch the Russian gas deliveries to Western Europe. It travels to Turkey through Ukraine, Moldova, Romania and Bulgaria and brings 10 bcm of natural gas per year that account for 40 percent of Russia's gas imports to Turkey.

Suffering from transit-related bottlenecks due to the ongoing tension between Russia and Ukraine, the Trans-Balkan pipeline continuously generates concerns about the stability of its deliveries. Russia may well decide against extending the transit agreement with Ukraine that is due to expire in 2019 and stop for good the gas deliveries through the Trans-Balkan pipeline to Europe. If this happens, the geopolitical situation in the region may change, while the newly constructed TurkStream pipeline will become the sole replacement for the Western Corridor. In its turn, Ukraine will lose a handsome contribution to its strained budget, if transit of Russian gas through its territory comes to an end.

No doubt, Turkey is a lucrative market for Russia in terms of gas sales. Russia exports roughly 27 bcm of gas per year to Turkey to meet around 60 percent of its market demand. By the gas imports volume, Turkey is second to Germany only. This makes both countries dependent on each other in terms of supply and demand – and eventually the natural partners. It has created solid ground for the construction of such a mega pipeline as TurkStream. Natural gas will remain the prime energy carrier in Turkey for the foreseeable future, making TurkStream highly beneficial for the country's economic development.

Energy is the backbone of the Turkey-Russia cooperation and in the gas sector particularly. Since recently, it has acquired a new dimension by expanding to the nuclear sector. Russia's Rosatom is engaged in the construction of Turkey's first nuclear plant in Akkuyu near Mersin that will meet 10 percent of Turkey's energy demand while creating a new sector for the Turkish economy. A stable development of energy cooperation builds ground for successful interstate relations.Since August 2016, Turkey-Russia relations have experienced a tremendous boost and continue to steadily progress since then. The countries leaders meet on a regular basis and with an interval of less than two weeks occasionally.

"Our intense dialogue is evidence of productive partnership established in bilateral and regional matters," President Recep Tayyip Erdoğan said after meeting in Ankara with Russian President Vladimir Putin on Dec. 11, 2017.

Today, regional stability is a priority matter on the Turkey-Russia agenda. Turkey and Russia – along with Iran – are the key players in Syria, having assumed the role of guarantors of the peace settlement in the framework of the Astana process.

As such, "Our approach to certain developments may differ, but we clearly share a desire to resolve acute global conflicts and we will definitely continue coordinating our efforts in the pursuit thereof," President Putin had said at another press conference in Ankara in December 2014.