The Saudi doctrine of quashing dissent 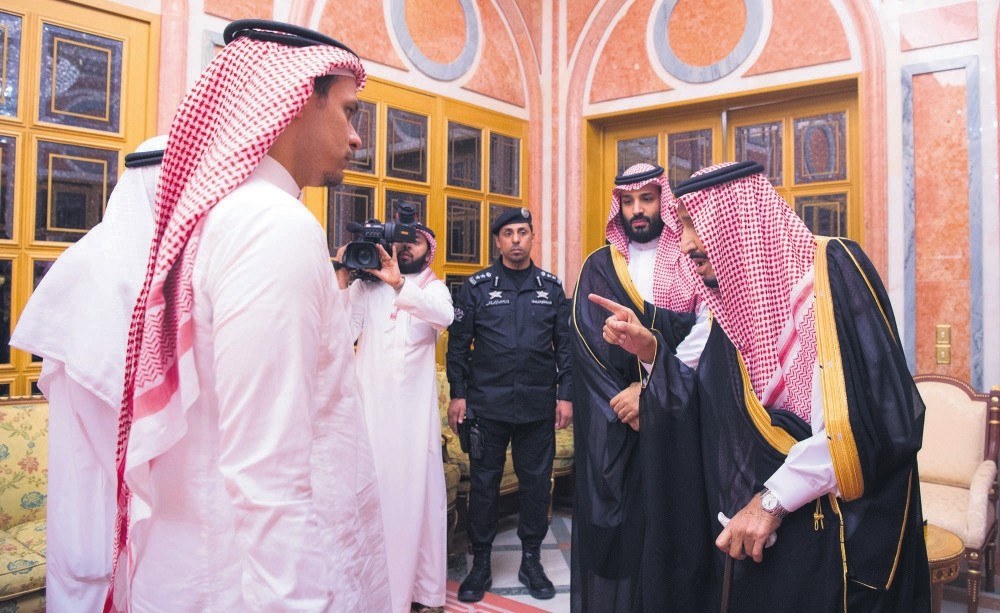 It is obvious that those responsible for taking Khashoggi's life had not thought through the consequences of the crime otherwise planned with extreme wickedness. This act of monstrosity is going to haunt the Saudi leadership forever

The Saudi doctrine of suppressing dissent has a ruffian quality to its harshness. The silencing of journalist Jamal Khashoggi by killing him in the kingdom's diplomatic post in a major world city raises new questions about the nature of Saudi authoritarianism under Crown Prince Mohammed bin Salman (MBS).

Do they believe in any rules at all? This question must be asked.

Khashoggi fled the Saudi kingdom because he wanted to pose serious questions about the policy direction under MBS, the de facto ruler widely known by his initials. He knew the dangers of asking those questions in the new environment of fear in which you no longer had the option of merely obeying the ruler. Everyone was required to loudly cheer the new boss.

So much has been written about the savagery Khashoggi was subjected to inside the Saudi Consulate in Istanbul. We have learned a great deal about his political ideas, his intellectual standing in Arabia, his proximity to power, his pleasant nature as an individual and to what extent the regime viewed him as a threat that someone at the highest level of the Saudi leadership had to order his murder.

The murder location, the methods employed, the desperation shown by his killers and the risks assumed by those who ordered the hit were unprecedented.

This act of monstrosity is going to haunt the Saudi leadership forever.

It is obvious that those responsible for taking Khashoggi's life had not thought through the consequences of the crime otherwise planned with extreme wickedness.

Many people associate the rise of MBS with the start of a new wave of repression in the kingdom. The crown prince has led a spectacular crackdown against power structures within the ruling family. Top businesspeople, respected scholars, activists and intellectuals have been humiliated and punished because MBS would tolerate no dissent against his decisions, which are made in a way that is seen radical even by the kingdom's well-known autocratic standards.

In his hurried manner, MBS easily beats the princes of the United Arab Emirates (UAE), who have been accused of recklessly destroying the cultural and religious fabric of their country in their propaganda quest to become regional economic and political gurus.

The fawning press MBS received initially in the West would hardly have prepared anyone to foresee the criticism he is receiving these days.

His brutal war in Yemen is being scrutinized in a new light; there is better understanding now that the detention of royal adversaries and other wealthy people in the Ritz Carlton Hotel temporary prison in Riyadh had other sinister aims rather than the claim of fighting corruption.

MBS is now seen as a dangerous ruler for the whole region. Too bad if he directly ordered the killing. Equally bad is if he didn't know about it because the Turkish investigation revealed so much about the conspiracy and the methods.

The manner of Saudi denial from the very beginning followed standard procedures adopted by authoritarian regimes. They blame their intelligence apparatus or low-level officials when a situation turns messy.

Khashoggi's murder was too messy, too extraordinary for their normal excuses to work.

The Saudi kingdom was neither prepared for the international backlash nor for the professionalism of the Turkish security agencies.

It is not too difficult to understand why. Countries like Saudi Arabia, the UAE, the current Egypt and Bashar Assad's Syria at present invest huge resources in quashing dissent by brute force. At home, they are able to bend the situation in any manner they please. Outside their borders, their capacity to pay bribes and negotiate deals using multinational networks cannot be neutralized easily by dissidents. When a dissident knows a lot about them and has the ability to shape public opinion, it alarms them.

The Saudi kingdom not only goes to great lengths to silence critics from Arabia, it deploys every tool at its disposal to confront those who may undermine its image anywhere in the Muslim world.

The late King Abdullah's stance on the massacre of Egyptians following the coup against the country's first democratically elected President Mohammed Morsi was one such example of their cold-bloodedness.

As the custodian of the two holiest Islamic cities, the Saudi government gets alarmed when a dissident voice is heard against its rule from a Muslim country; however, Saudi officials are able to manage opposition from Muslim groups and individuals in non-Muslim jurisdictions in a more leisurely manner.

As for Muslim governments, Riyadh keeps them stuck in futile projects such as the so-called Islamic Military Counter Terrorism Coalition and exploits the Arab League and the Gulf Cooperation Council (GCC) as its tools of distraction. The idea is to close space for everything that lacks the Saudi stamp of approval.

Panic begins in Riyadh the moment an influential voice rises in a Muslim jurisdiction against their maniacal lifestyles. Then they forget all about Islam and humanity in their zeal to confront their adversaries. Terror is unleashed against those refusing their bribes and temporal temptations.

The Riyadh administration is not so afraid of dissidents living in the West because Western governments have collaborated with it in neutralizing many. A dissident merely writing in an American newspaper would not present an existential threat. The Saudis know they can count on Western support in dealing with those who cross the line.

Why was Khashoggi the target?

Khashoggi was different. He was an insider who knew too much. And now he was moving freely in two important countries, with access to media and political power. Writing for The Washington Post gave him an influential voice and access to leaders in Turkey provided him a unique political legitimacy across the Muslim world. One point prevalent in the Saudi setup is that the authorities do not want dissidents to think they can achieve anything, in material terms or in influence, after rebelling against them. Bahrain is their model of how a sovereign jurisdiction should behave and Saud al-Qahtani, the key royal adviser who was part of the murder plot, is an ideal mindless loyalist.

The intellectual Khashoggi would have been a pillar of strength to a system full of unpresentable rogues. Khashoggi finally rebelled against the crown prince's policies, not against the interests of his country or its people. MBS must have found that as a grave provocation on a personal level. Once he was out, there was no scope for reconciliation, contrary to what has been written in the press about the overtures from the regime for Khashoggi to return. The red line was crossed when Khashoggi publicly criticized MBS and his policies through his articles.

The support the crown prince received in the West for his reform propaganda inflated his ego, so Khashoggi had to be eliminated as an example to other would-be critics. It is not surprising that MBS and the top Saudi leadership were stunned at the universal uproar over Khashoggi.

Cocooned in their isolated lives, how little they understand how the world works. They grossly underestimated Turkey's resolve to defend its turf; they were clueless about the professionalism of Turkish institutions and overconfident about manipulating Western systems and perceptions.They carried out an unpardonable criminal act. Now, they are clueless about what calamities it may bring if urgent steps are not taken to correct their decades-old destructive behavior.