Far-right movements and the trajectory of neoliberal economies 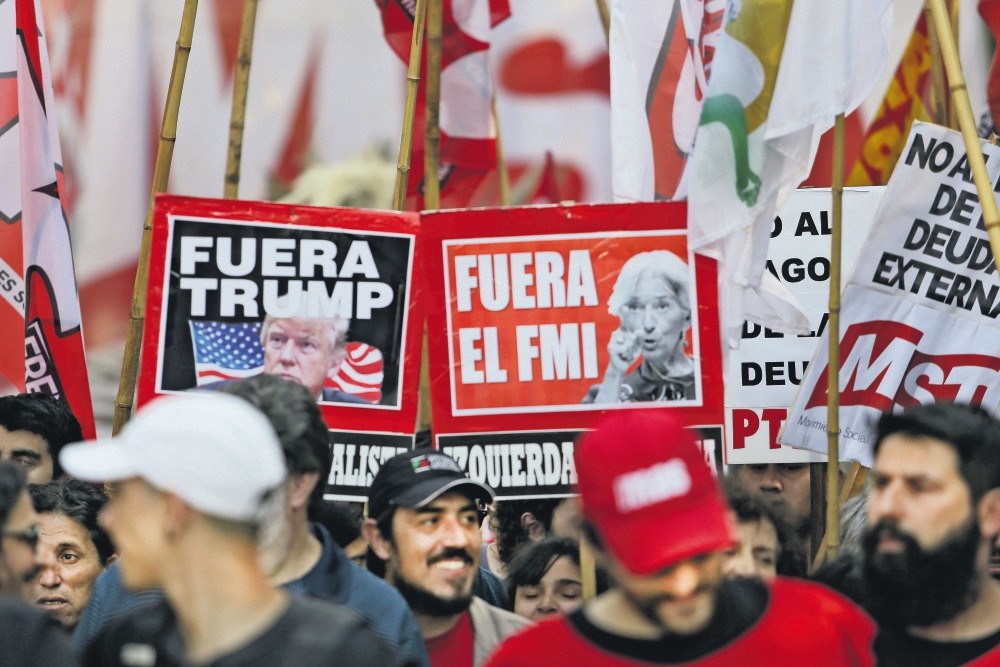 Protesters with signs bearing the faces of President Donald Trump and IMF chief Christine Lagarde march against the G20 summit being held in Buenos Aires, Argentina, Nov. 30.
by Ahmet Akyıldız Dec 08, 2018 12:00 am

Although the aim of the neoliberal approach is to maintain price stability and limit price hikes, the fact that this isn't seen in any developing economy proves the reason for the far-right's rise and its popularity is not as simple as it seems

The external debt level of emerging economies has reached its highest level in history and according to global consulting giant McKinsey, the increase in the external debt burden of emerging markets, especially in South America and Asia, is a precursor of a global economic bubble. As the trade war starts to trigger inflation, it would not be wrong to say that 2019 won't be a very bright year for many countries, including China.

With new International Monetary Fund (IMF) agreements being signed one after the other, new political embargoes and military tensions growing every day, we continue to sound the death knell for domestic manufacturers worldwide. The rescue packages offered every time – which allegedly contain liberal and innovative approaches – bring nothing but privatization and budget cuts. Meanwhile, the fragile economies, which had to entrust their doors to international giants because of the heavy terms in their contracts while trying to maintain their nation-state status, have also declared war on U.S. President Donald Trump and his policies.

The societies divided due to political and economic rivalry are having a hard time because of the indecisiveness their governments have shown in economic management every year. We witnessed the first example of this in Argentina this year. In a period when the current Argentine government came to power with pledges of protecting domestic producers and improving unemployment figures, the signing of one of the worst IMF deals in history led the people of Argentina pouring into the streets.

Despite the rising right-wing movements and fascism in the world, it is very difficult to predict the extent of disappointment of the people who think that liberal and more left-leaning policies should be supported. They feel that they have been prejudiced against fascist parties, who chose to pursue protective and harsh policies, and have started to question their choices. The worst and scariest part is perhaps this. The impact of the economic and political decisions taken by governments on societies' determinations of the future are not analyzed in any way. Those who have tried to stay liberal and find a happy medium throughout their lives are now shifting towards far-right doctrines with fears of unemployment and anxiety about the future. This situation should also be examined sociologically, beyond elections. If we cannot prevent those people pushing to make fascist and radical choices over fears of refugees, wars and income inequality, we will yearn for parliamentary democracies.The fact that right-wing and left-wing politicians do not fulfill the promises they made before elections but instead make the demands of global companies their priority is one of the main sources of the problem; especially for emerging economies, which have been exposed to a series of hardships ranging from customs exemption to extra taxation due to the protectionist policies implemented by the United States, have become much more fragile. We have seen how the fascist right, which accuses the government of inaction as soon as its fiscal policies start to come under scrutiny, has risen in recent years, especially in Europe. Every country from Greece to Germany has seen a rise in the number of seats, 25 percent, demonstrating that the momentum of the fascist right is not slowing. In particular, parties that employ harsh rhetoric against refugees and focus on youth unemployment and security concerns seem to be gaining value and consolidating their place.

It should be noted that the rising right in Europe in the 70s and 80s and the far-right in the 2000s and today differ from each other at certain points. The current situation of G8 countries, which at the time did not compromise on their aura of unity against Russia, should be examined thoroughly. In France, politician Marine Le Pen's anti-Semitic, Islamophobic and anti-immigration rhetoric has received serious support. According to the findings of a study investigating the profiles of people who voted for right-wing populist parties in EU member states between 2008 and 2018, the percentage of people supporting far-right parties in Italy was 8 percent in 2008, while this reached 50 percent in 2018. The same rate rose from 32 percent to 51 percent in Poland, 13 percent to 27 percent in France, 10 percent to 21 percent in Germany, 17 percent to 54 percent in Greece and from 43 percent to 65 percent in Hungary. In other words, between the years 2019 and 2025 nonconformist, anti-EU and anti-NATO stances will continue to gain ground.Fascist parties have gained an advantage here by analyzing the electoral behavior of people aged 18-35. It is not difficult to foresee the end of archaic neoliberal movements that ignore economic troubles and dismiss unemployment. In a period where the Brexit decision can be taken swiftly and the idea of a European Army can be said right to a U.S. president's face, clinging to traditions and not accepting change will ensure nothing but failure.

Center-right and non-secular left parties should set aside the profits of neoconservative companies and focus on being a social state. If the opposite happens, parliaments will only consist of fascists thriving on chaos and tension and minority parties that support only green economies and promises to keep the defense budget to a bare minimum while arguing that borders don't exist. Since this partnership will last only a short time, figuring a way out of this chaos will be as burdensome as Brexit talks for world economies.

The rhetoric of unfair privatizations used by fascist right and left parties, as well as serious restrictions on employee rights, long working hours and late retirement decisions, all come back as votes for such parties. The letdowns of the European left, who discredit the right's economic policies and then implement those same practices when they come to power, also affect the choices of Generation Y in elections.

It should not be forgotten that these movements, which started with the assertion that public aid in some sectors could enhance productivity as long as it doesn't hamper international competition, which was also voiced by Nobel laureate economist Paul Krugman in the 1990s, have grown mainly due to the effects of income inequality. At the center of the problem, not analyzing the social changes experienced during the downsizing of nation-states that took liberalism as their example is to turn a blind eye to the middle and lower income groups becoming unemployed when it comes to interests of the capital.

The fact that support policies do not allocate sufficient funds for agriculture, as is the case with Brazil and Argentina, and company rescue packages are laid as a burden on the people's backs via taxes cause this vicious cycle to become more chronic. Although the aim of the neoliberal approach is to maintain price stability and limit price hikes, the fact that this isn't seen in the G8 or any developing economy proves the reason for the far-right's rise and its rank in people's votes is not as simple as it seems. The "work culture" the West claims to be so humanistic is preparing its own end by disregarding economic instability and the value of human life. This could mean the end of neoliberal economies.