Macron may well be the 'president of the rich,' so is the media? 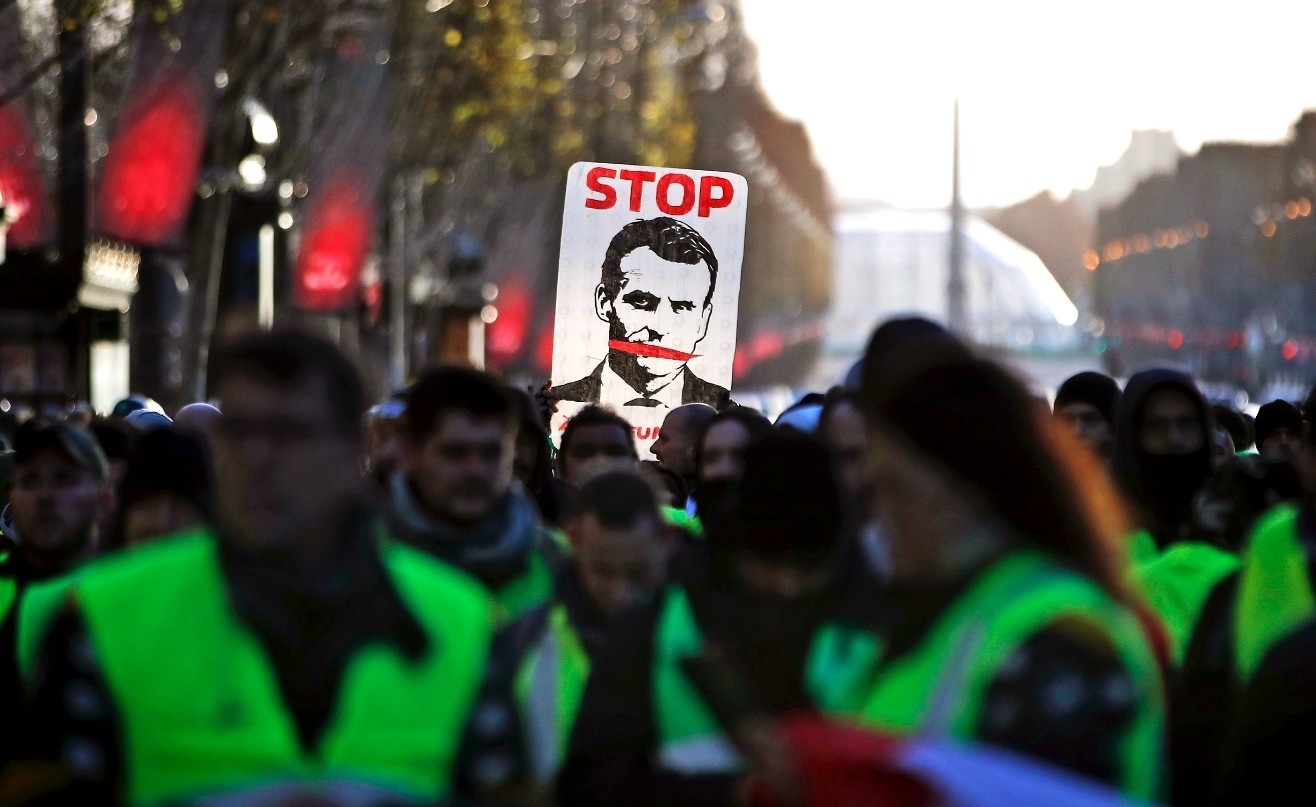 ,Yellow vests, protesters hold a sign saying ,Stop Macron, as they walk down the Champs Elysees avenue to Place de la Concorde during a demonstration in Paris, Dec. 8.
by Mehmet Solmaz Dec 10, 2018 12:00 am

Shortly after his fifth month as president in September 2017, French President Emanuel Macron was labeled "the president of the rich" by his rivals, the media and, most importantly, ordinary French people who were not pleased with the economic steps taken by the 40-year-old ex-investment banker.

While deciding to cut a housing benefit allowance enjoyed by millions of poor French people, Macron's government also reduced the "Solidarity Tax on Wealth" – in French, the Impôt de Solidarité sur la Fortune, a relatively small rate of tax paid by the rich. Macron's supporters stressed that this type of tax has been eliminated in most developed countries and it pushes French businessmen to prefer owning assets in neighboring countries. However, these arguments did not ease the outrage concerning the wealth tax, which has cost the treasury 3.2 billion euros in lost revenue.

Libération, the left-wing newspaper, ran a photograph of Macron on its front page with the headline, "Hero to the rich." On the same day, the Financial Times (FT) published the same story with the title "Macron slashes France's wealth tax in pro-business budget," in which the author described the tax cut as a "longstanding demand from investors and entrepreneurs."

The FT's assessment of political developments, especially its coverage of the domestic issues of nation states, has always been criticized by many for dictating reforms and acting as a watchdog that behaves like a flagship of democracy and global economics. Finnish communications professor Anu Kantola, who penned a detailed academic case study on the political ideology of the FT, argues that the FT contributes to the rather negative tone toward nationally based politics and economies and the newspaper's journalistic voice has a clear sense for "right policies" and politicians are evaluated by their ability to enforce reforms.

While the FT and the French rich were backing Macron's welfare tax, unsurprisingly, Macron got slammed by his opponents, as the man who did not give a toss about the poor. Former French Finance Minister Michel Sapin was quick to give a hint to what was awaiting Macron: "These tax measures will have a brutal and violent effect on worsening inequality."

Leave aside embracing Macron, who shone bright during international meetings, the young leader has earned more antipathy from the French public by his statements or unexpected harsh responses to events. Over the summer, Macron gave a teenager a lesson in manners after he shouted out, "How's it going, Manu?" Macron responded, "No, you can't do that, no, no, no, no... You call me 'Mister President' or 'sir,' OK?"

Yellow vests: Not a reaction to fuel tax

Following the announcement of a tax increase on fuel, France entered into the type of turmoil that the country had not experienced for decades. In response to the planned tax hike, the angry French working class took their "yellow vests" ("gilet jaunes" in French) out of their vehicles and protested the draft bill, saying they feel that Macron has ignored their social and economic needs to bulldoze through his economic reform agenda. So far, four have died and hundreds have been wounded. Macron first vowed that street violence would not force him to back down over his government's tax policy and labeled protesters as "thugs." This tone helped the yellow vests stage one of the biggest nationwide protests on Saturday, Dec. 1. Those interviewed have a common message: The fuel tax was the last straw and the government has to pay attention to the economic crisis deeply felt in the homes of the French public.

Until those Saturday protests, the French media left the scene to the foreign press, mainly and unsurprisingly to Russia Today, which has recently launched a massive studio in Paris and covers the yellow vests protests with some 30 journalists in the field. While being lost as to how to cover the protests, the French media first covered the story mainly with statements provided by politicians they favor without actually talking to the angry masses on the street, who were getting images of the protests from social media networks and the foreign press.

The violence carried out by vandalizing groups and looters were quick to take the headlines, as in the case of breaking the sculpture of Marianne, the symbol of the French Republic, at the Arc de Triomphe. In some cases, journalists were verbally and physically attacked by violent protesters. However, videos of incidents like snipers taking positions on tall buildings or elderly passersby being hit by police were not making the news, adding yet another reason to anger the public. State owned France 24 was quick to blame Facebook for fueling the tension and ran an in-depth story on how the yellow vests first started and mobilized via Facebook through "filter bubbles," a term that suggests algorithmic filtering that personalizes content presented on social media and by the use of search engines.

Communications scholars Elizabeth Dubois and Grant Blank's work on filter bubbles nicely put how social media aids the yellow vest protests, stressing that individuals tend to use multiple media to access news and political information and "importantly, individuals consume news and political information in a patterned way," meaning those who are part of the protesting society or sharing news content on economic burdens tend to find themselves with Facebook content of the protests that the mainstream media frame in a much different way.

Condemn the violence but feel the pain of the poor too

The coverage of the unrest has somewhat changed in the domestic French media. For instance, those who closely monitor the events noticed that the detention of over 700 high school students on Thursday first found itself on social media; hours later, French news outlets started covering the story one by one. Although the stories ran with content portraying the detained youth as violent vandals without drawing attention to facts seen in videos circulating on social media: Dozens of high-school students with their hands tied behind their backs with plastic handcuffs and forced to kneel facing a wall. This incident reminds us that in the coming years we will more frequently hear the term Fifth Estate, a term that is used for digital technologies that hold the government and media more accountable. Describing the concept of the Fifth Estate as challenging for traditional journalistic approaches, Willian H. Dutton and Elizabeth Dubois say individuals seamlessly move across the boundaries of the existing institutions through the channels of Internet-enabled technologies.

Although Macron has backpedaled and announced the planned fuel tax is scrapped from the annual budget plan, he was not successful in calming those he called "thugs," who again took to the streets on Saturday. Ugly events do occur in such protests, but adopting a softer tone like the prime minister, who said, "No tax is worth jeopardizing the unity of the nation," could have been a wiser step for Macron, who already suffers from a record-low approval rating of 23 percent.

There are other ways of fighting global warming without a strong direct effect on the daily lives of the public. Cutting industrial emissions through technology or de-growth, improvement in mass transit, urban planning and government policies on real estate are some of the alternatives. Macron definitely knows this too. Whatever holds him back from altering his policies should not contain the French press too. Interviewing small groups of protesters in a rural French town by L'Humanité and Le Monde will not change the reality on the ground in suburbs in Paris, Marseilles, Toulouse or other parts of the country.