Is French democracy the first victim of a changing world order? 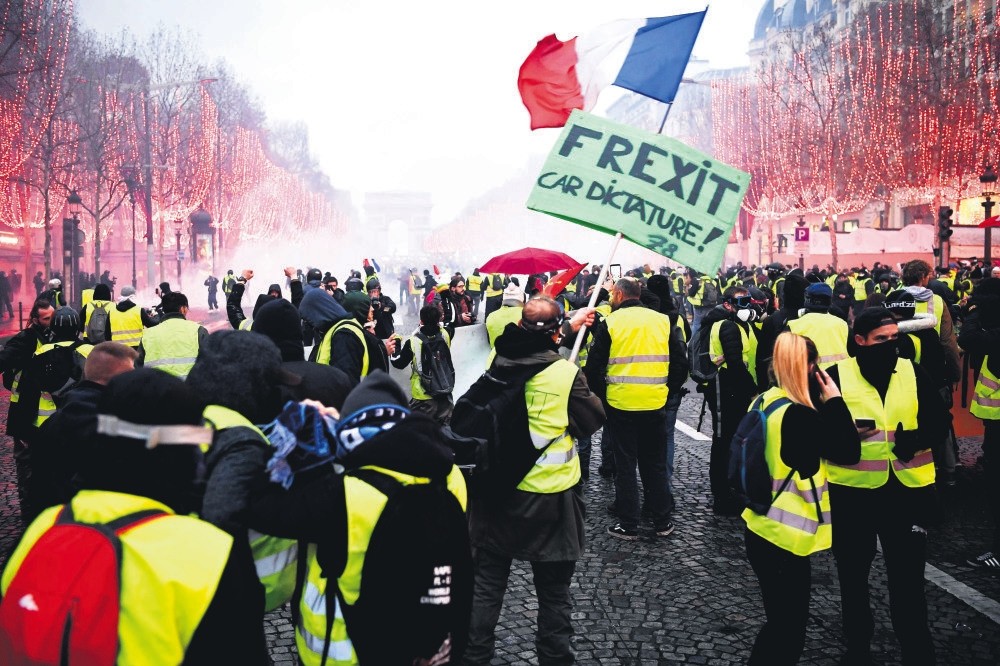 Demonstrators wearing the iconic ,yellow vests, of the French protest movement stand on the Champs u00c9lysu00e9e avenue during a rally against the government, in Paris, Dec. 8.
by Markar Esayan Dec 13, 2018 12:00 am

The ‘yellow vest' uprising may fade away due to accompanying violence and the government's backing down. But this fading does not mean that such a phenomenon will disappear in France in particular or in the world more generally

U.S. President Donald Trump said in a tweet after the announcement of the compromise that, "I am glad that my friend (Macron) and the protesters in Paris have agreed with the conclusion I reached two years ago."

According to him, the issue was about the misguided "Climate Agreement." "The Paris Agreement is fatally flawed because it raises the price of energy for responsible countries while whitewashing some of the worst polluters... in the world," he said.

This piece is not about the climate agreement. I would like to focus more on the popular uprising in France and on the sociological and political reasons why Trump is so interested in it.According to recent polls, 72 percent of the French support the protesters. This is quite a high rate. Despite the scenes of looting and violence from Champs-Elysees shown on TV screens, it appears that 60 percent of people also want the protests to continue. These ratios also include half of the 18.5 percent who support Macron.

Who are these yellow vests? Are they rightist or leftist, racist, poor, migrants or middle-class people? Since what triggered the protests was the increase in diesel fuel prices, there is an explanation that those taking to the streets are "Affluent enough to buy a car, but poor enough so as to not afford fuel."

This explanation points to a quite interesting and relatively new social phenomenon. These people are not affiliated with trade unions or labor organizations. Their mix can be described as heterogeneous; largely rural, over middle-aged, becoming poorer, former middle-class whites who correspond to those termed as the white middle, lower-middle and working classes in the U.S. It can also be said that they are usually loyal to their state, with no prior participation in any struggle or organized movement.

Of course, the latest fuel price increase was the final straw. The yellow vest uprising may fade away due to accompanying violence and the government's backing down. But this fading does not mean that such a phenomenon will disappear in France in particular or in the world more generally.

Basically, we should understand that this global phenomenon stemmed from neoliberal policies and from the economic consequences of a decline in the West's ability to exploit the East. As Western nations switched to neoliberal policies during the 1980s, an abrupt shift from post-World War II welfare state policies ensued. Welfare state practices were left at the mercy of market mechanisms. When the collapse of the Soviet Union accompanied that process, the left was in no position to respond to this. Hence, it was generally accepted that capitalism was the only option.

Concurrently, many large emerging economies, particularly China, have become serious competitors. They have managed to draw vast investments through cheap labor and the principle of free movement of capital. In fact, that was nothing but the delay of a crisis. With their resulting large trade surpluses, China and other countries funded U.S. debt. International companies moved their manufacturing operations to these countries because of tax advantages and the appeal of cheap labor. The effect of this trend on advanced economies was the impoverishment of the working class, agricultural workers and farmers.

On the other hand, global companies have gone out of the control of nation states since they are not confined to national borders. What emerged is a financial power above states, which is inimical to nationalist tendencies. Hence, the latest presidential election in the U.S. was perceived primarily along these lines: "The American 'nation state's' candidate Trump versus the 'globalist's' candidate Hillary Clinton."

Trump successfully used the anger of the lower-middle class against the elites. After all, the elite establishment had failed to reach out to the lower-middle class which was becoming impoverished and even accused them of ignorance and stupidity in the person of Trump. Here we should note the difference between global perceptions about Trump's stance, discourse, attitudes and policies and those of the American lower-middle class. That wave was so strong that Trump won the race despite all the efforts by that giant machine called U.S. media. Perhaps, if Hillary Clinton had won the election, we might have seen another yellow vest movement in the U.S. Doubtless, there are different nuances between the U.S. and France. But I think the underlying discontent is the same.

In the U.S., that anger found a political outlet in Trump. Perhaps we should be happy with it for the moment. But it was different in France. As you know, Macron got only 24 percent of the vote in the first round of elections. When the possibility of a Marine Le Pen victory strengthened, a "Macron compromise" of sorts emerged, garnering 60 percent of the vote. But that vote did not reflect a political reality. What it reflected was helplessness at the most. The mighty center-left and right parties were decimated. Macron was elected in a last-ditch effort to avoid Le Pen.

Macron has adopted discourses and practices that are abhorred by those who take to the streets now. Not only did he remove the wealth tax for high-income people but also insisted on a discourse that is hurtful and dismissive of the lower-middle classes. He failed to inspire hope. Rather than a protest against price increases, this uprising can be better described as a burst of rage caused by hopelessness about the future.

All signs indicate that Macron is an incompetent political actor now. The issue is not about Macron or Le Pen themselves. How ready is France to solve this democracy crisis? Unfortunately, it is not ready at all. Therefore, we can assume that populism will increase, centrist politics will further fall out of favor, and that a reactionary attitude instead of durable and long-term solutions will be preferred. And this is not good news, either for Europe or the world.

French democracy is being testedWe can think that in the medium term, Le Pen's party will benefit most from this rage. And this will be bad news for immigrants. In such a case, it is apparent that these people whom we do not see among the yellow vests and who are at the bottom of society, will mobilize. In other words, policies that do not prioritize democracy and income justice, are not inclusive and ignore the poor will not bring peace to France or similar countries.

The Third World cannot be exploited as easily as in the past. Their riches cannot be transferred. On the contrary, these countries enter the competition as well. Under Trump, the U.S. is trying to manipulate the process to its advantage by relying on hard power. It's another question whether it works or not, but Europe lacks even this power. I think everyone sees that Britain left the EU in a hurry in an effort to avoid this.

It's obvious that the East is back in the game again, that we have begun to live in a multipolar world, that riches will not be distributed exclusively among the G7 countries anymore but at a global level. The world must be restructured according to these new realities. And this new order should serve not only the finance capital but also the wider, poorer masses. In fact, it is quite a difficult equation. The poor and unemployed masses cannot be ignored anymore. Big countries had better focus on reforms aimed at ensuring social justice instead of coveting other countries' resources to close this gap.

Otherwise, we will face serious global conflicts that nobody in their right mind would want. But if necessary measures are not taken in time, the world may fall victim to exigencies that will cause democracy to be suspended.

The 20th century has already provided enough sad examples of what happens then.