Ukraine between the two fires 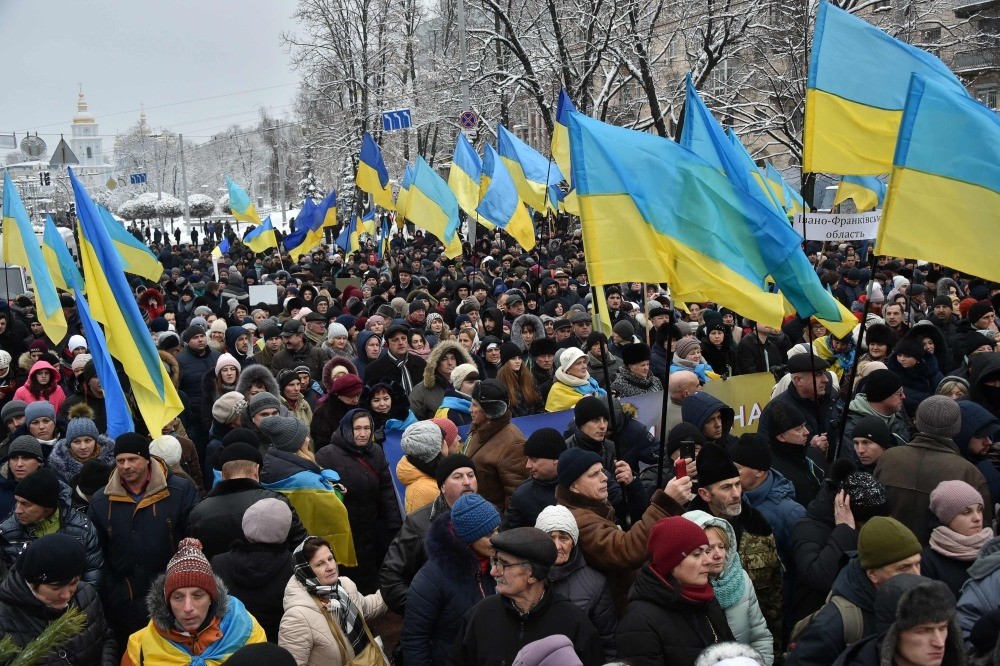 Ukrainians take part in a rally outside of St. Sophia Cathedral ahead of a historic synod expected to establish an Orthodox church independent from Russia, in Kiev, Dec. 15.
by Bayram Aliyev Dec 22, 2018 12:00 am

Ukraine has found itself stuck in the middle of the power struggle between the West and Russia, and risks losing its reputation and position in the international community while facing the threat of force and a violation of its territorial integrity by the Kremlin

The headline of this article was taken from a novel written by well-known Azerbaijani novelist Yusif Vazir Chamanzaminli. He is referring to the position of Azerbaijan in the 18th century, which faced threats from Russia and Iran wanting to conquer it. Today, the situation Ukraine encountered can be defined with same imagery. The two fires, one of which is further steps for integration to the West, are dangerous for the national security of Ukraine because of Russian provocations and deepening conflicts in the country; especially when it is considered that the West is not willing or will not be able to protect the country. On the other hand, going back and reconciling with Russia also poses a threat to the country, because in this case, Russia will try to totally control Ukraine to guarantee its dominance over the country in the future.

After the Cold War, there was a growing interest in the West in post-communist countries, especially in Russia. People hoped to find prosperity, democracy and protection of human rights in new political institutions based on the Western model.

In this regard, there were great expectations from Western countries. As of early the 2000s, these expectations saw results and some former communist countries that chose the path of integration with the West gained membership to organizations like NATO and the EU. However, the events in the following years once again proved that, unfortunately, the West could care less about the integration of these countries as well as the formation of democratic society.

Many Western countries claim that the protection of human rights and the promotion of democratic values take priority in foreign policy throughout the world, but more often than not, material interests prevail. The above-mentioned societies were disappointed in the West, as there are many problems in the attitudes of Western decision-makers toward them. Over the course of time, the disappointment brought about the questioning of not only those states but also their ideologies and values. In this context, people tend to not count on so-called Western values, as the West has already begun to lose its reputation with two-faced policies in the eyes societies of post-Soviet countries.

Better to have a thorough investigation on the cause of this disappointment rather than the Ukraine problem. Apparently, among former Soviet countries, Georgia and Ukraine, having borders on Russia, were expected to integrate to the West the most. It provides grounds to say that the George Bush administration encouraged Georgia to integrate to the West by supporting Georgian President Mikheil Saakashvili's government. Tbilisi, which benefited from Georgia being out of the control and took courageous steps on South Ossetia and Abkhazia relying on the West, caused trouble for the Kremlin, and in August 2008, war broke out in Georgia. As a result, Georgian society failed to get support from the West, especially from the U.S., and this resulted in the violation of Georgia's territorial integrity, which may be impossible to settle in the near future.

The annexation still goes on

Today Ukraine is experiencing the same fate. Ukrainian society supported liberal political figures in the hope that it would lead to integration with the West. They took all the necessary steps as well. The result is obvious. Today, Ukraine is a country unable to preserve its territorial integrity, is embroiled in ethnic conflicts and, above all, Crimea is completely annexed by Russia. Evidently, Ukraine is in chaos because of adventurous political lines. What about the West? Did it fulfill its commitments? Could Ukraine get the necessary support in a timely manner? These questions are too difficult to positively answer.

In the end, the West is facing fragmentation and being unable to provide its political, military and economic security. Literally, Ukraine is caught between two flames. On the one hand, it could succumb to the provocative movements by Russia at any moment and on the other hand, can be deceived by the West like its partner Georgia. That leaves Ukraine, whose territorial integrity was violated and who failed to integrate into the West, lost its reputation in the international arena and underwent the "harsh force" of Russia, as well.

And what about former communist societies looking forward to integrating to the West? For sure, they already know that efforts made to get rid of Russia's control or falling for the alluring promises of the West lead to disaster. Civil war risks, violations of territorial integrity, and economic and political crises leave the state, its citizens and their societies under the thumb of Moscow instead of establishing a democratic society, at least for now.

*Ph.D. candidate in the Social Science Institute at Istanbul University. His research interests include the post-Soviet region and regional security issues