Jan. 15 Brexit vote: How not to do politics 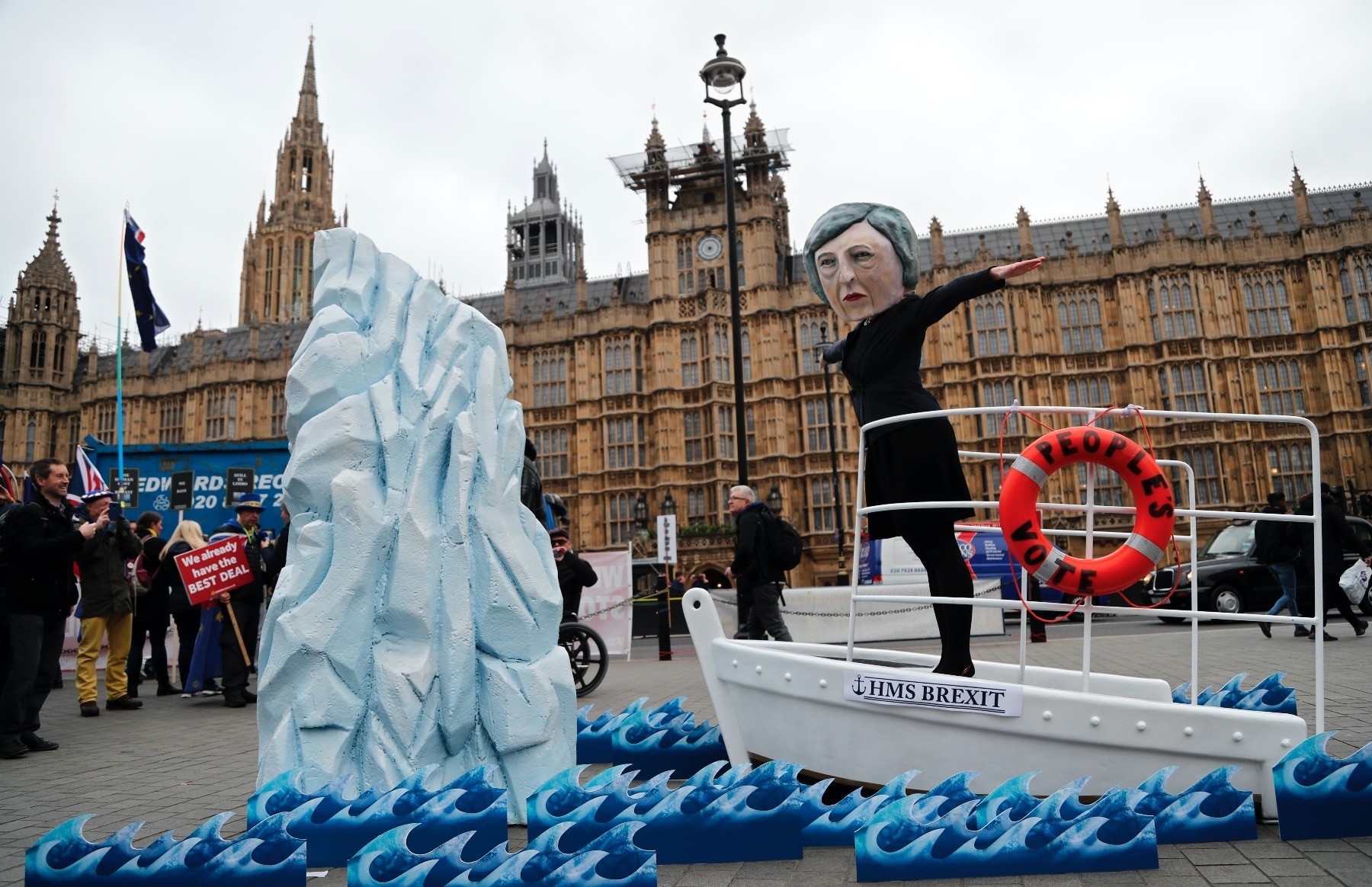 An activist wears a mask of Britainu2019s Prime Minister Theresa May during an anti-Brexit demonstration, in front of the Houses of Parliament, London, Jan. 15.
by Jurgens Klaus Jan 17, 2019 12:00 am

Betting is a much-cherished leisure pursuit in the U.K. – horses, soccer teams, future names of celebrity children; a combination of studied choices and the guessing game. However, recently pundits have been confronted with an event that has proved all but impossible to forecast: Brexit.

How come? Because no one knows what is going to happen and even more so after a pre-vote that was labeled as historic by many commentators. Granted, historic it was indeed, yet in a different sense of the intended meaning: What had occurred instead was a defeat of historic proportions for the U.K.'s sitting government as its Brexit Withdrawal Agreement, carefully – some say hastily – stitched together with the EU resulted in a staggering loss of 202 in favor with 432 against; to top it all up, 118 members of Prime Minister Theresa May's very own Conservative Party rebelled.

Let us take a look at some more details. First, saying that the political system is in chaos is an understatement of some proportion; for example, after Tuesday night's vote a motion of no confidence was tabled against the prime minister by opposition leader Jeremy Corbyn, yet as is widely expected one that will be rejected – so why put it forward in the first place? Second, there is an ever more restless public, totally uneasy about what emanates from parliament with some people even arguing the case for a British yellow vest movement. Third, the business community is worried about the prospects of crashing out of the EU with no deal at all. Still, all these are the tip of a much bigger and much more dangerous iceberg.

Flashback: There was a time when a politician entered a local restaurant other guests would feel quite proud rubbing shoulders with an elected office holder so to speak no matter whether they voted for her or his particular party or not. Politics as a profession was after all a noble career choice, something we would recommend to our children.

Not any longer in today's U.K. The Brexit chaos is not simply about leaving the EU (or not) – what surfaces is sheer and utter disrespect for "Mr. and Mrs. Ordinary Voter." Besides, it is not only about Europeans asking themselves in all seriousness whether London has lost the plot. It is the British people themselves who are completely fed up with infighting, backstabbing and conspiracies among leading politicians.

However, regardless of how grim the wider political system's outlook appears to be the government has only very little time to act as the March 29-deadline approaches and approaches fast. Hence, what are the options? All are based on the assumption that Theresa May survives today's vote of no confidence, which was clearly echoed in the halls of parliament last night.

As the term "logic" has since long been detached from Brexit proceedings and as no one has a crystal ball, there are nevertheless some options left at the current government's disposal. To begin with, last night it was heard in Westminster that the most obvious choice for Theresa May will be to tour Brussels one more time and ask for further concessions. As a matter of fact, she might actually get away with this strategy as EU leaders are extremely worried about a no deal. This must be done quickly and rumors have it (see the crystal ball comment above) that she would travel as early as next week.

Moving on to another scenario, the government decides to delay Article 50. This article is the legal basis for an EU member state to withdraw from the union. Yet delaying is not automatically revoking, as in the word "revoke" lurks another Brexit danger.

Legal counsel made it clear that a member state that decided to leave the union can at any moment before they do so, decide to stay put. No agreement with the remaining member states is necessary. Yet, to simply postpone pulling Article 50 needs an agreement with the EU. Last night it was stated by EU leaders that in order to grant London this right the U.K. would need to propose a road map, laying out what benefits a delay would bring in order to master a coordinated Brexit. To revoke means in principle to annul or postpone indefinitely; to delay implies a precise timeline from when Brexit talks would resume in earnest between Brussels and London.

And then there is the crashing out the possibility. As it seems there is no majority in the U.K. Parliament for simply sitting idle until 2,300 hours on March 29, hence it is assumed that no matter how cumbersome, a last-minute majority would vote for a deal of some description. This leads us straight to a related option: In order to avoid what no one wants, except for hard-line Brexiteers, who supposedly do not have a majority anymore, neither among the public nor elected politicians – the no deal scenario – and anticipating that Brussels might make some concessions but in all likelihood will not ditch the Northern Ireland backstop, Theresa May may want to strike a deal with the opposition Labour Party. This in order to find a majority in the Parliament even if her 118 own party members would continue to vote against their own prime minister.

For this to happen she would need to allow many tricky issues such as more workers rights to become part of the deal, basically tying the country more closely to the EU yet still officially departing from it. This scenario and if Brussels does not allow for significant changes to the Withdrawal Agreement which was voted down last night entails a weekend (or two) of meetings between opposition leaders and the government in order to find common ground; possible, but very difficult to manage in particular with little time left.

In this context, we would stumble across a further possibility. May herself decides to call snap elections. Although she previously declared that she would not run herself her party might come out as winners without the need for a coalition partner. In order for this to make any strategic sense, she would need to delay Article 50 until after that election; much political food for thought.

On Tuesday night one had the impression that EU leaders showed a united front in displaying sadness about the vote. At the same time, they said that the ball is in London's court and that the EU awaits clear signals about how London wants to proceed from tonight until March 29.

And what about the EU?

But more cynically inclined observers could not overlook that although the joint agreement was voted out, some federalist politicians discreetly expressed hope for that London shelves the entire Brexit process for good, hence revokes Article 50 for good and stays within the union. A rather far-fetched assumption one might wish to add yet something a very vociferous "remain" camp back in the U.K. for sure supports.

To sum it all up: nothing is certain and everything is uncertain except for one thing. By the time this article makes it to the press, all hypotheses could already have been proven wrong. But then again it is nothing but a snapshot; however, a snapshot of complete chaos which has led to levels of hostility and polarization in the U.K. has never experienced before, not even during times of nationwide strikes or student upheavals.

Brexit divided an entire nation – whatever the outcome, whichever scenario discussed in this contribution will finally materialize and the only thing certain is that it will take a huge effort from all political actors to start rebuilding trust into the political system and to stop a whole new generation from turning their backs to democracy as we know it.