Russian-Turkish cooperation a long-term win for both parties 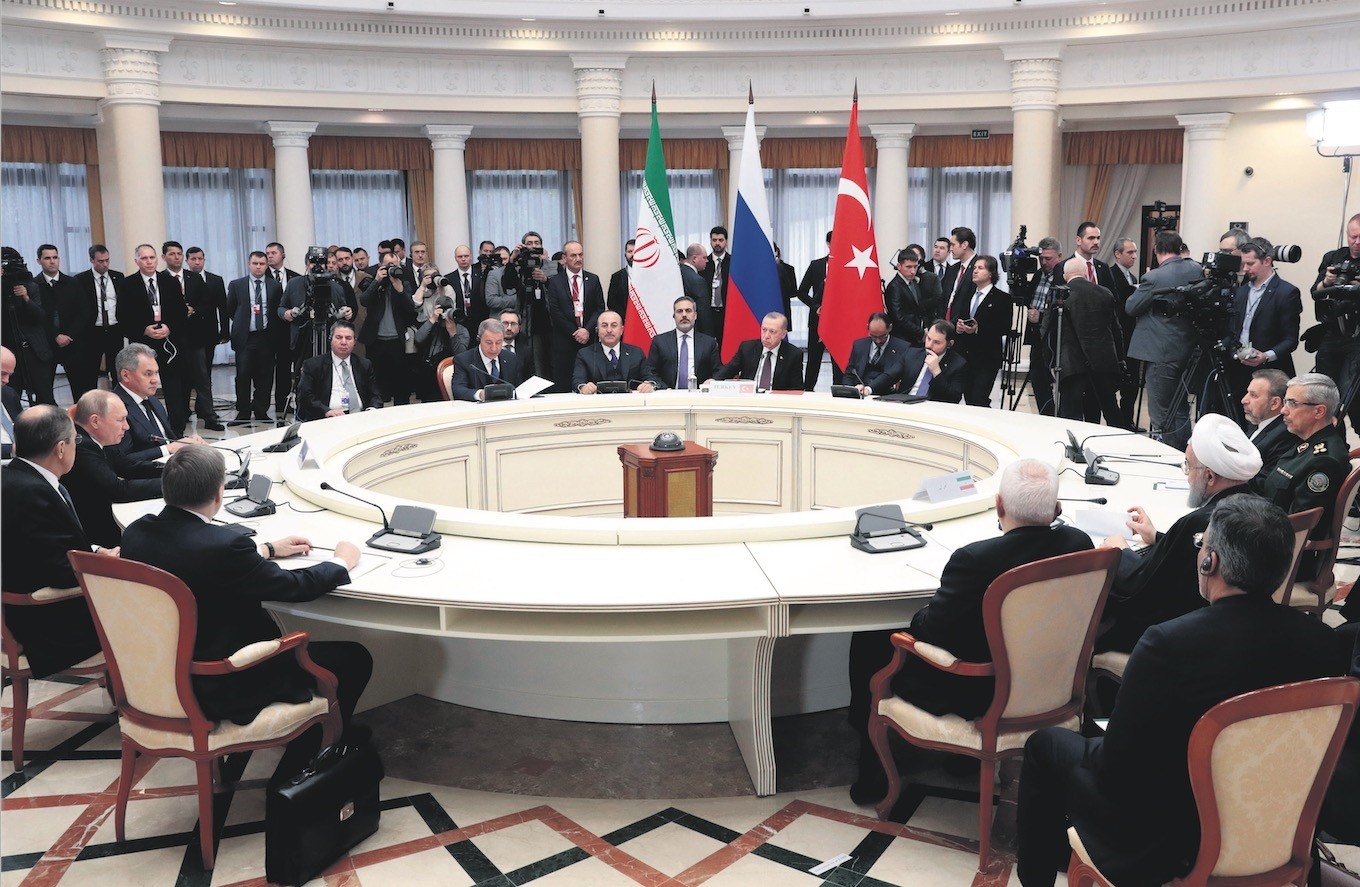 There is still a long way to go, but the meeting between Turkey, Russia and Iran in Sochi has accomplished a significant initiative in the Syrian peace process

In the Russian language, there is an expression "not to see a forest beyond the trees" when paying close attention to the "here and now," the essence of what is happening in a broader perspective is lost. From my observations, I note that many citizens in both Russia and Turkey, while enthusiastically discussing current political events from the news feed, sin with this: They tend to confuse the momentary and difficult political game with real relations between countries in a long-term perspective.

The real relations between countries are not conversations and statements by politicians, often loud and opportunistic, but those agreements that as a result fall on paper and, which is equally important, are implemented in practice.

In this sense, the relationship between the Russian Federation and the Republic of Turkey in their recent history has never been a negative relationship or even with a zero balance line. On the contrary, we always see a real positive result.

The milestone of the new Russian-Turkey relations was in December 2004 when Russian President Vladimir Putin visited the Turkish capital Ankara. Quite often the media tend to refer to international visits with the word "historic." However, it was that visit – the first visit of the head of Russia to Turkey for more than three decades – that rightfully entered the history of bilateral relations, leading not only in words and not on promises, but in practice to the opening of new mutually beneficial pages of Russian-Turkish cooperation.

And I urge each time we begin to discuss the next round of our dialogue on complex and complicated regional issues, to carry out in our minds an inventory of what the parties have already achieved in practice for the minimum period of time, in terms of the historical process. I will give just a few of the most vivid examples.

For many decades, the Republic of Turkey has persistently tried to enter the club of powers using peaceful nuclear energy. In Turkey, there were many tenders for the construction of the first nuclear power plant. Some of them were even awarded to American and European companies. But none of them in practice led to construction; meanwhile, Turkey began to gain scientific and engineering competencies.

As a result, the government of Turkey took a nonstandard step: There is not a single nuclear power plant in the world constructed and operated under the build-operate-own model. But this model, quite boldly, was chosen for the Akkuyu Nuclear Power Plant. And in the year 2008, the year of the global financial crisis, Russia, the only country in the world, expressed its readiness to respond positively to the invitation of Turkey, transfer nuclear technologies to it and invest over $20 billion to the country's economy by building the first Turkish nuclear power plant.

The parties also agreed to jointly implement the TurkStream project, which foresees that Russian gas not only goes directly to Turkey, reducing cost for Turkish consumers, but also goes to Europe through Turkish territory. For more than 10 years I have written and said in Russia that, sooner or later, Russia will have to take this step. This idea was at that time at best called "marginal" by many Russian experts. But today we see that it is not the notorious "near abroad," including Ukraine, on which Russia was inclined to rely too much on in strategic issues of energy policy, but Turkey that is becoming a key-partner for Russia in the energy sector.

The supply of Russian high-tech missile defense systems, the S-400, created loud statements in the United States, and for many years the U.S. denied Turkish requests to sell their own Patriot system. It did not happen because the Russian systems will "spy" on NATO defense and collect sensitive information. It is clearly because the Russian-Turkish deal threatens to interrupt the many years of hegemony by the United States in the field of military-technical relations with Turkey. Unilateral dictation and control of the development of Turkey by the Americans is difficult to call "cooperation." Capitol Hill, until today, tries to define what Turkey should know and what it should be able to produce and what it shouldn't.

In its turn, Turkey demonstrates that it has the sovereign right to choose and is making a step with Russia on the S-400 system. The Turkish aim is to ensure that the defense industry of the country becomes, in a full sense, "national." And behind this door, which the parties open, many concrete projects arise, which, with all their inevitability, will be the subject of discussion between Turkey and Russia.

To avoid any misunderstandings, I feel it necessary to underline, that, as I said above about the Turkish benefits of cooperation with Russia, Russian benefits are also absolutely symmetrical.

This is what is rightfully called a "win–win" situation. The fact that there are always people on both sides who are trying to assert that cooperation is "more profitable" to the opposite side is inevitable and only confirms the fact of "mutual benefit."

We should realize that there are not many countries in the world that, despite all the differences in their views on many issues, including the most sensitive ones, demonstrate such a will and ability to cooperate and to dialogue, which we see in Russia and in Turkey and in the leaders of the two countries – President Putin and President Recep Tayyip Erdoğan.

In Syria, this Russian-Turkish dialogue has led to the fact that the sides, together with Iran, through the Astana process are close to creating a precedent that is important in modern history after the end of the Cold War.

Firstly, the Astana format is saving Syria from a Libya-like scenario, which turned Libya, not into the worst country in the world, but into "Comanche territory."

What seemed inevitable, especially in 2015 in the fourth year of the Syrian civil war, when Russia took into account the price of its silence at the U.N. Security Council on Libya, was the literally forced intervention in Syria at the invitation of Damascus.

Secondly, and most importantly, the Astana process, above all, is regional rather than distant or overseas where players decide together the fate of the region they live in. Today, Russia, Turkey and Iran are doing this in front of the whole world.

Questions between them are being solved, though often hard and painstaking, often painfully. Do you know why? It is very simple: Because the parties seek to take into account the interests and concerns of all, as much as possible, and find middle ground because they are talking. Only in the case of when the one-sided interests dictate to the rest of the world there are no problems. The decision is made and announced from a single "Twitter account." We may become living witnesses to the fact that the single-center model will come to a natural end. Although, unfortunately after much pain and damage in many regions of the world in the last quarter of a century.

The trio in Sochi

Here is what I personally saw in the meeting between presidents Putin, Erdoğan and Hassan Rouhani, who, in a somewhat amusing way, met in Sochi on Saint Valentine's Day.

First of all, the statement made by Donald Trump about the withdrawal of American troops from Syria and the contradictory or multidirectional actions of the American side that have eroded the statement in practice are one of the main factors that increase uncertainty in Syria at a critical moment for the future of the country. The United States, with its vague position on Syria – "I am leaving to stay" – is a distracting and deterring factor for the real participants of the peace process in Syria first of all, and for the countries of the Astana agreement.

If we look more broadly at the role of the West in the peace process in Syria, we see the ongoing activities of a number of countries to block the titanic efforts of Russia, Turkey and Iran and the official Damascus, aiming to establish the Constitutional Commission. This activity can only cause bewilderment to people who have been seeking peace for Syria for many years, as the leaders of the Astana process explicitly stated at their press conference following the talks in Sochi.

Of course, the relations between the countries of Astana are by no means seamless and the dialogue between them is difficult. However, the main thing is the commitment of Russia, Turkey and Iran, not in words but in deeds, to a political settlement in Syria, based on the principle of the country's territorial integrity and readiness to discuss all existing issues among themselves.

At the same time, Russia, saying that it understands the concerns of Turkey, confirms these words in practice.

As we saw in Sochi, Russia does not put undue pressure on Turkey over deadlines set forth in the Russian-Turkish Idlib agreement. Russia does not insist on the "immediate" fulfillment of the obligations assumed by the Turkish side. As we can conclude from the regular meetings between the ministers of defense of the two countries, Sergei Shoigu and Hulusi Akar, hard work between the parties continues non-stop on the ground, and in Sochi there was no talk concerning a large-scale military operation in the last Syrian de-escalation zone.

Also, let us not forget that it was Russia who was the first to put the Adana agreement of 1998 on the agenda, as the legal basis for Turkey to eliminate the terrorist threat from Daesh and the PKK-linked Democratic Union Party (PYD) and the People's Protection Units (YPG) by creating a security zone on Syrian land along the Turkish-Syrian border. This should be regarded as an obvious step by Russia to support Turkey at a later stage, when the details related to the U.S. withdrawal from Syria become clear. Few people doubt that this exit is only a matter of time, and Turkey is absolutely right when it says that in Syria, after the U.S. leaves, there should not be a power vacuum that terrorists could fill. The unity of opinions existing on this issue between Russia and Turkey is quite obvious.

In a situation where Trump is trying to overcome internal resistance in the U.S. on a Syrian exit, the main task for the Astana process is to eliminate all obstacles and to form a Constitutional Commission for the transition to a full-scale political settlement. I would like to hope that the next Astana process meeting, which will be held in Turkey, will be marked by more concrete statements by the parties and will happen in the very near future. This strong hope was expressed at the press conference in Sochi by President Erdoğan who said, "Hope for peace in Syria is at its strongest for the first time."

The practical result in Syria will be another strong confirmation of what I said at the very beginning – Russian-Turkish relations are not relations for the sake of the relations themselves. With enviable regularity, they will lead to concrete results of interest to both parties. However, let us remember that this is not a predetermined given; it is great and painstaking work by both parties.