Turkey-EU relations: A lengthy engagement with no marriage in sight 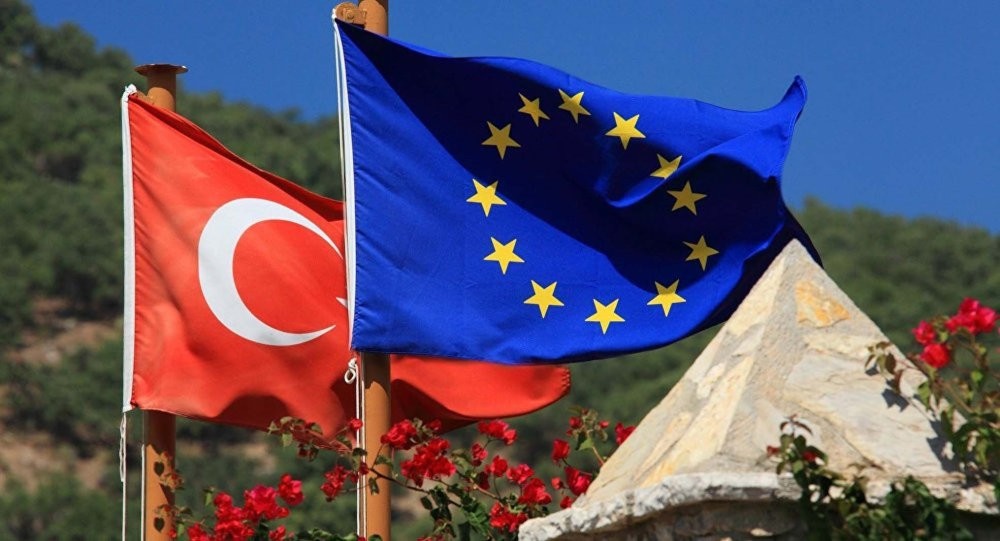 Turkey's aim to reach a deal for full membership is still valid; therefore, it wouldn't be a surprise if its ties with the EU gain momentum in the near future.
by Reyhan Canavar Feb 19, 2019 12:06 am

Relations between Turkey and the EU can be seen as an endless engagement in which no marriage exists. For some, this might sound pessimistic, but I would rather call it realistic. Because, when evaluating the length and scope of Turkey and EU relations, I can reasonably conclude that Turkey is going through a long and rough Europeanization path with no end in sight.

Since 1987, Turkey has been trying to obtain full EU membership. For that end, many reforms were made in Turkey's domestic policies. Despite this, it has experienced many ups and downs in recent years, as the EU has frequently accused Turkey of drifting away from European values and democracy. If this was not enough, the EU left Turkey alone in dealing with global problems such as the refugee crisis and terrorism. Instead of backing Turkey up during harsh times, Turkey's anti-terrorism policies have been highly criticized by its Western counterparts, which are actually the same policies that make the European continent more secure. As a consequence, full membership possibility has been left out, but to be honest, is this the real reason behind it or should we read between the lines? As time goes by, Turkey lost its hope but doesn't want to give up its long-standing ties with the EU.

The origins of Western Identity

Turkey's attachment to the West started before the existence of the EU and go back a long way to the Ottoman Empire. Back then, the first Europeanization attempts were made, which were known as the Tanzimat reforms, which gradually led to the establishment of new institutions, based on Western values, acknowledged as the building blocks of today's modern Turkey.

However, more far-reaching reforms were made in 1923 under the rule of Mustafa Kemal Atatürk, directly after the establishment of the Turkish Republic. Since then, Westernization has been prioritized and the desire to be part of the Western bloc has been further intensified. In the guise of modernization, Turkey initiated reforms in social and cultural areas in a hurry. The abolishment of the fez and some Islamic clothes, adopting the Latin alphabet, the abolition of the sultanate, and a strong secularization process were some of the actions by Turkey to get Europeanized. After, Atatürk's death, further reforms were made in Turkey's political system. Following the first multiple-party elections in 1950, when the Democratic Party (DP) won over the Republican People's Party (CHP), a transition to a multi-party system took place. Yet, after the coup in 1960, it became clear that democratization had not been a smooth road for Turkey. The DP, who seemed for a single-party rule, was overthrown in a military coup.

In the following years, Turkey faced a second coup in 1971, followed by another one in 1980. Subsequently, however, a peaceful handover of power took place right after the general elections in 1983. Gradually, by trial and error, under Turgut Özal's presidency, Turkey entered a new phase of fundamental reforms. Özal sought a different way to Westernize; as a leader who had both western and eastern values, Özal opened a door for Turkey into the of world politics by adopting the principle of a free market economy and balanced approach of foreign policy. Özal could deal with diplomacy by making Turkey a bridge country between the East and West.

In 1997 Turkey faced another democratic breakdown when Prime Minister Necmettin Erbakan of the Welfare Party (RP), was forced from power due to its Islamic discourse. After, his resignation, further measures were taken to keep religion out of civil service. Consequently, the political party was banned, religious schools were closed and a headscarf ban at universities was introduced.

Between 2002, and the years after when the Justice and Development Party (AK Party) came into power, Turkish politics has remained comparatively steady. Back then, party leader Recep Tayyip Erdoğan, and today the president of Turkey, saved the country from a deep economic recession. Alongside, human rights concerns were put high on the political agenda and the EU accession process gained momentum. In this regard, Kurdish minority groups were given the right to broadcast in their own language, the headscarf ban was abolished, and churches and synagogues were renovated for reopening. At that time, the West praised Turkey as an example of successful, Muslim-majority and secular democracy. More than ever, this brought Turkey closer to Europe. However, due to political indifferences membership talks have halted many times, with no progress made in recent years.

However, Turkey after seeking an alliance with Europe for a long time, saw the relationship begin officially in 1959, with Turkey's application to the European Economic Community (EEC).

In 1963, Turkey was officially made an associate member of the EEC, which brought both parties together in economic and trade matters. Moreover, in 1995 Turkey signed the customs union agreement and arrived at a higher degree of EU integration. In 1999 at the Helsinki summit, Turkey was guaranteed candidacy status, for which it had applied for in 1987. After six years, in 2005 the accession talks were officially opened. Until today, Turkey has made many efforts to obtain full membership by harmonizing its domestic policies with European standards, set out in the Copenhagen and Maastricht criterion.

However, in the following years, diplomatic relations deteriorated many times due to the accusation of Turkey having a hidden Islamic agenda, human rights violations and non-compliance to EU standards. This led to further deadlocks in accession talks. As a consequence, some chapters were blocked and benchmarks for Turkey could not be opened.

While economic considerations were in the foreground, security concerns led to further engagement. Given Turkey's plans for becoming an energy hub, it has become a great potential for the EU to reduce Europe's dependency on Russian gas. When it comes to the national security concerns of Europe, Turkey backed Europe many times.

Ever since 1952 when Turkey became a NATO member, without any guarantee of EU membership, Turkey has been involved in many peacekeeping operations and made great contributions to Europe's national security achievements.

In this particular way, Turkey tried to gain credibility for its Western identity, but despite, long-lasting economic cooperation and being a buffer for Europe's security, Europe is still suspicious about Turkey's "Europeanness."

Despite successful economic integration between Turkey and the EU, political integration has not been reached yet. Many times, both have fallen apart due to divergence perceptions on political matters. To start with the Cyprus issue, which is seen as a permanent stumbling block in the accession process. The EU requires Turkey to recognize the Republic of Cyprus as a legitimate state in order to run negotiations smoothly. While for Turkey unification is not the best solution for a peaceful settlement. As a security guarantor Turkey has kept its presence on the island since 1974. Even now, Turkey remains steadfast in protecting the rights of Turkish Cypriots living on the island. Therefore, it is not planning to give up its role as security guarantor, not even for the stake of full EU membership. As a consequence, the EU has refrained from opening new chapters, which has led to further deadlocks in accession talks.

In the aftermath of a civil war in Syria in 2011, Turkey and the EU faced another downturn. Today, almost 4 million refugees have fled to Turkey with the hope of traveling further to Europe. Instead of providing a secure crossover, the EU is seeking out ways to prevent the influx. In 2016 Turkey and the EU made a deal to slow down irregular migration into Europe. In exchange, the EU promised to provide financial aid, reopen accession talks and allow Turkish citizens to travel visa-free.

Unfortunately, like in other deals, the EU failed in keeping its promise. As this wasn't enough, Turkey was criticized on alleged human rights violations. Whereas refugees on European soil were treated as convicted criminals, Turkey saved Europe from a serious burden by spending more than 24.1 billion euros ($27.5 billion) for sheltering refugees. Unfortunately, Turkey came back home empty-handed and is still carrying the weight of the refugee crisis on its shoulders.

Moreover, recently, following a failed coup in 2016, Turkey was again unfairly blamed when it started cleaning up infiltrated terrorists in areas of public service. Instead of siding with Turkey, the EU parliament, for example, urged a freeze on EU membership talks and accused Turkey of further diverting from the European path. To revitalize accession talks, the EU asked Turkey to ease its terrorism laws, which seems like a too ambitious requirement. Somehow, given the security threats faced on its own soil and in the region, Turkey needs them and as President Erdoğan said, Turkey will not let EU legislation interrupt the security of Turkey.

Future of the vital partnership

Despite breakdowns in Turkey-EU relations, both are aware they need each other for economic and security reasons. Therefore, Brexit is taken as an example; a breakup of deeply rooted economic ties will be quite expensive for both sides. Therefore, the joint revitalization of Turkey-EU relations should be the best option in which restoring mutual trust and reciprocity are crucial.

If we take it from both perspectives, despite a long road with ups and downs, Europe is still questioning the Europeanness of Turkey. At the same time, Turkey is losing hope and doubting the union's sincerity, as it seems to have hit the glass ceiling of unspoken cultural requirements in the accession talks. As the former minister of Turkey-EU affairs, Egemen Bağış said, Turkey is less concerned about becoming a full EU member anymore; rather it sees its Europeanization process as a diet in which all kind of reforms are on stake for improving the living standards of its citizens. Erdoğan said recently that Turkey will not give up its ties with Europe and that it will reject any other deal unrelated to full membership. From now on, Turkey doesn't want to waste any more time and has called on the EU to take on a decision.

Recently, Turkey and the EU entered a new period of normalization. In this context, on Nov. 22 they met during the EU High-Level Political Dialogue in order to resume the stalled accession talks and put visa liberalization on the table again. However, will Turkey succeed in being accepted as a full EU member this time? We will see what the future will bring us.