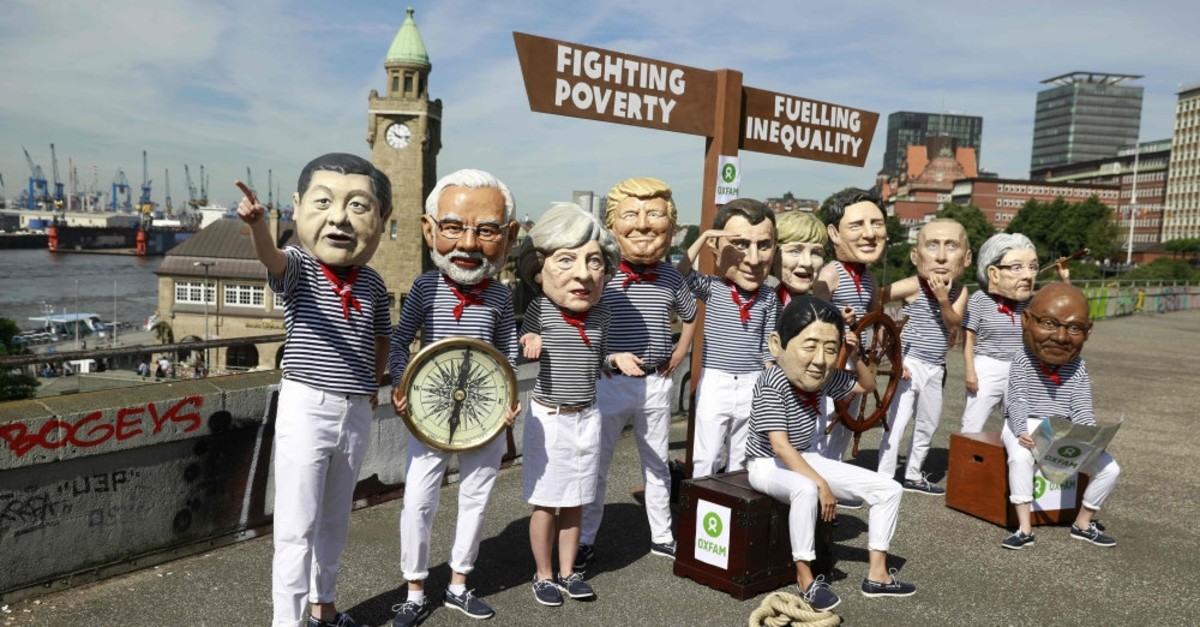 As the bonds between the two shores of the trans-Atlantic alliance weaken, Russia and China are asserting themselves more confidently in global politics. It is now high time to offer a comparative analysis of the security visions of the major global powers, for the future stability of mankind is at stake.

Since its foundation, U.S. leaders have not shown strong enthusiasm to pursue ambitious policies abroad to institutionalize American dominance unless other continents, most notably Europe and Asia, came under the domination of anti-American power blocks or any global power threatened U.S. national interests by trying to take a strong presence in America's "near" abroad. However, since the early years of the Cold War era, the U.S. has shifted towards an internationalist mentality and valued the promotion of its values to other places in the name of national security interests. Despite the fact that "realists" and "isolationists" have traditionally abhorred adventures abroad and argued against the use of force unless vital national interests were at stake, they have nevertheless sided with liberal internationalists in defining the U.S as an exceptional country in terms of its norms and values.

The steady increase in material and ideational power capabilities of non-Western powers, the abject failure of American nation-building projects across the globe and the economic crisis that hit the Western world severely in late 2008 have led Americans to go through a soul-searching process over the last decade.

Both Obama and Trump administrations have recognized that the U.S. should no longer play the role of global hegemon in maintaining peace and security. The main message given by Washington over the last decade is that American support to the security interests of traditional European and Asian allies should be earned, rather than taken for granted.

With Obama and Trump, the focus is now on great power politics and competition. Dealing with China and Russia now appears to be more important than focusing on humanitarian interventions, counterterrorism and democracy promotion exercises. The latest National Security Strategy and National Defense Strategy, adopted in late 2017 and early 2018, respectively, testify to this new mentality. This introverted approach and increasing aversion from military engagements abroad seem to have strengthened the realist, pragmatic and isolationist tendencies in U.S foreign policy.

Americans appear to have rediscovered that their nation is now more an Indo-Pacific than a trans-Atlantic one. Whereas today's America seems to adopt a mixture of containment and engagement strategies vis-à-vis China, Putin's Russia is viewed more as an anti-American headache than an existential global security threat. Americans do not put Russia on an equal footing with China. Russia is a regional power in decay, whereas China is a global power on the rise.

On the other hand, the EU of today is far away from fulfilling the desired goals that its founders set decades ago. At stake now is the EU's ability to deal with emerging modern challenges while remaining true to its post-modern aspirations. The European dream has been that the post-modern values of cosmopolitanism, multiculturalism, secular universalism, multiple interdependencies and soft-power oriented policies abroad would gradually transcend modern practices of balance of power politics, realpolitik security strategies, self versus other distinctions and the prioritization of hard power instruments in interstate relations. Yet, Russian actions in Ukraine, Syria and Eastern Europe do now confirm that geopolitical confrontations still haunt Europe and the constitutive principles of the post-Cold war era security order in Europe are now on shaky grounds. The growing chaos and anarchy in the Middle East and North Africa also presents the EU with very serious strategic challenges, the least of which is migration.

Recent years have also witnessed the rise of illiberal, populist, anti-integrationist, anti-immigrant and anti-globalist parties across the European continent. The EU's post-modern integration process seems now to be on life support. The United Kingdom leaving the EU is a fatal blow to the EU's credibility and its ability to act strategically on a global level. Neither Germany nor France can lead the European ship in the uncharted waters of the emerging century. The idea of European integration being based on common identities, social policies and the legitimacy of Brussels-based institutions might further erode in the years to come should centrist politicians in key EU member states fail to provide solutions to the daily problems of their people and continue to lose elections against fringe parties.

Far from having established itself as a credible actor speaking with one voice, the EU now appears as a weak geopolitical actor in the eyes of other global actors. The United States, Russia and China continue to employ the time-tested strategy of divide-and-rule in their relations with EU members. Each sees the EU as a playground in their geopolitical games.

What about the Far East?

Looking to Far East Asia, one can notice that China has pursued the so-called "peaceful rise/peaceful development" strategy since the late 1970s. However, China's recent assertiveness seems to have led both the Obama and Trump administrations to redefine China as a potential hegemonic threat that needs be contained. Hence the strategic pivot, rebalancing, Quad and trade tariffs.

While Chinese see their country's efforts to leave behind the "centuries of humiliation" as China's rightful return to its glorious days, the majority of Westerners tend to feel skeptical about the end results of this process. Through such initiatives as "One Belt, One Road" and the Asian Infrastructure and Investment Bank, China is trying to give the message that there is a mutually constitutive relationship between its development at home and the development of others abroad. The goal is to bring into existence more China-friendly regional and global environments in which China's march to global primacy would not only remain uncontested but also be accommodated easily. Chinese rulers have never adopted an imperial mission whose driving logic was to conquer non-Chinese territories and project Chinese norms and values onto others in a universalistic fashion.

The main characteristic of Chinese foreign policy, particularly concerning its relations with the United States, seems to be avoiding taking clear stances on issues that directly touch upon vital American interests or global concerns. Unless the issues at hand concern Taiwan, Hong Kong, Tibet, the Uighur region or the islands in the South and East China Seas, China tends to avoid taking responsibility in global governance issues.

China is not questioning the Western-led international order in a revolutionary fashion. What it wants is to see its growing ascendance in the global power hierarchy be accommodated institutionally and peacefully. In case of Western reluctance to do so, China does not hesitate to mastermind the establishment of alternative institutional platforms under its patronage.

Focusing on Russia, one notices that Russia has witnessed a national revival process following Putin's ascendance to power in late 1990s. Yet Russia has lately come under the international spotlight once again following its annexation of Crimea, the support that it gives to separatist groups in eastern Ukraine, its military involvement in Syria on the side of the Assad regime and its continuous political meddling in Western liberal democracies. The major criticism directed to Russia is that Russia acts as a typical realpolitik power which deeply believes in the primacy of material power capabilities, the use of brute military force and commanding spheres of influence. Russia is believed to have been acting as a nineteenth century power in the twenty-first century.

Putin's Russia has been striving to help bring into existence a multipolar world order in which Russia plays a decisive role. Despite the growing strategic rapprochement between Moscow and Beijing in recent years, one not should conclude that Russia would act as a fiddle to China whenever its relations with Western actors deteriorate. In the best of circumstances China appears to be a trump card for Russia in its dealings with Western powers.

In Russian strategic thinking, Western institutions, most notably NATO, should not be the main regional platforms in which questions of European security are discussed. Putin being no exception, Russian security elites have been subscribed to the view that Russia has been deceived by Western powers in that NATO's enlargement occurred to the detriment of Russia's geopolitical interests and priorities.

Russia offers an example of traditional nation-states where sovereignty, state survival and territorial integrity are still the most important security issues. Having the largest stockpile of nuclear weapons in the world, possessing sophisticated conventional military capabilities, and sitting on abundant natural resources and a huge land mass are considered to be the main power resources of Russia. To Russian rulers, there are no universally agreed human rights and the use of force in the name of "responsibility to protect" would only mask Western imperial designs on other places.

Ascribing a messianic mission to Russia, Russian leaders wish to resurrect the defunct Russian empire in new clothes, which acts as the protector of traditional Christian values against the challenges stemming from the post-modern or post-religion societies in the West and religious fundamentalism in the East and South.

Russian elites are very much obsessed with the ideas that Russia is historically and empirically entitled to have an equal standing with the West and Russia's greatness and distinctiveness should be recognized by outside actors. As Westerners question Russia's equality and continue to lecture Russians on the superiority of Western values and Russia's shortcomings, Russia tends to define itself in opposition to the West.

The years ahead will likely see that major global powers will adopt a more realist than liberal foreign policy outlook. The only exception might the European Union. Yet, it remains to be seen how a liberal post-modern EU would survive in the world of emerging realist challenges from all directions.

* Professor in the Department of Political Science and International Relations and director of the Center for Social, Economic and Political Research (SEPAM) at Antalya Bilim University