The Khojaly massacre and its impact on today's conflict 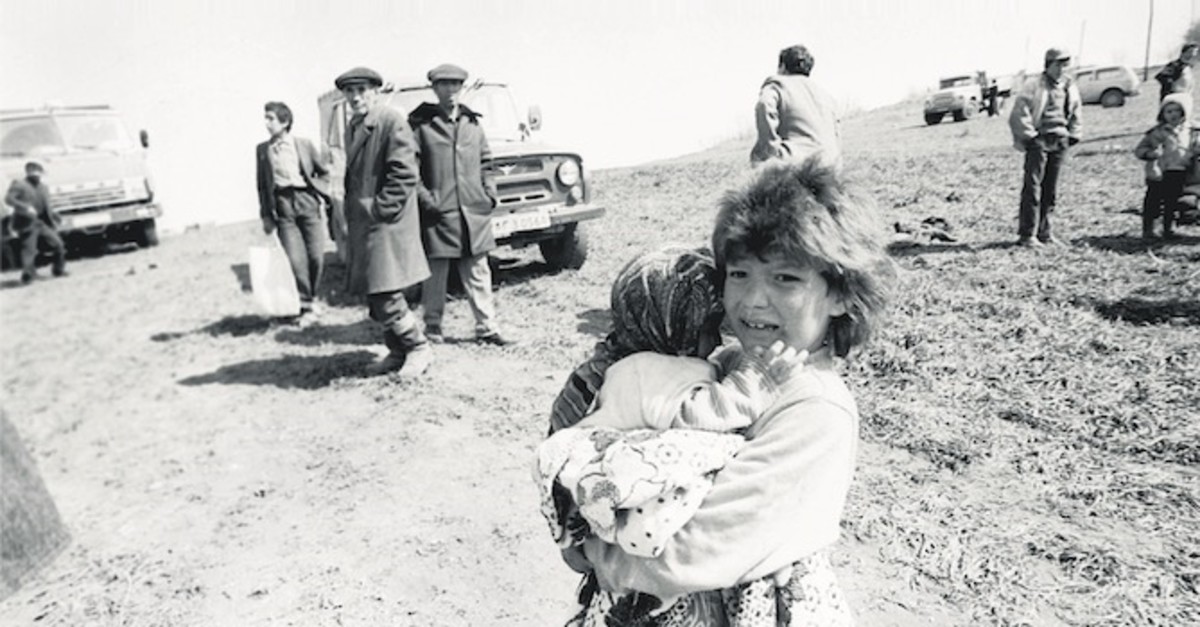 An archive photo provided by Anadolu Agency depicting a girl holding her sister after fleeing the massacre of ethnic Azerbaijanis by Armenians in the town of Khojaly, February 1992.
by Javadbay Khalilzada Feb 26, 2019 12:07 am

The Nagorno-Karabakh conflict remains a formidable source of instability in the South Caucasus region. More than a quarter of a century ago after the Soviet Union collapsed, Armenian nationalists moved quickly to expand their borders toward Nagorno-Karabakh and its surrounding regions, which were populated by Armenians and Azerbaijanis.

On Feb. 26, 1992, Armenian military forces massacred the Khojaly people. The Azerbaijanis characterized this catastrophe as genocide and these events continue to cause a great ache in individuals who attach meaning to Azerbaijan's national identity. In addition, Armenia has continued its occupation of internationally recognized territories of the Republic of Azerbaijan and launched a campaign of ethnic cleansing, affecting close to a million Azerbaijanis and inflicting many casualties and deaths. Before the conflict in Nagorno-Karabakh fully erupted, Armenian nationalists had already moved swiftly to deport Azerbaijanis who had lived and worked in Armenia.

In exile, Azerbaijanis articulated their demands to return to their ancestral land. What began more than a quarter of a century ago is as volatile and inflammable as ever.

At the outset, by marshaling support from its diaspora that spread across the world, Armenia campaigned and created the impression that Azerbaijanis suppress Armenians, in order to avoid the condemnation of the international community. When the government collapsed in Azerbaijan after the fall of the Soviet Union, there was nothing left to assure political stability or the continuity in leadership.

With little defense, the country was exposed to the large-scale effects of the Khojaly genocide, the details of which soon spread across the world. As Azerbaijan stabilized and returned to the international community, it regrouped to resist further Armenian expansionism and protect its territorial integrity. As of 2019, there are four active U.N. Security Council Resolutions: 822, 853, 874, and 884. Each one rejects the occupation, calling upon Armenia to withdraw from the occupied territories. These resolutions collectively "support the territorial integrity of the Azerbaijani Republic, reaffirming also the inviolability of international borders and the inadmissibility of the use of force for the acquisition of territory." Armenia is called upon to withdraw from the occupied territories and allow the return of refugees to their homes.

Since the 1990s, several rounds of peace talks and meetings were organized to resolve the crisis and achieve reconciliation via the support of the co-chairs of the Organization for Security and Co-operation in Europe's (OSCE) Minsk Group, the U.S., France and Russia, respectively. On the international scale, the conflict was characterized as a dormant conflict in the 2000s until the eruption of four days of war in the first part of April 2016. Counteracting the Armenian forces, Azerbaijani units succeeded in reclaiming occupied lands. In the first two decades of the 21st century, Azerbaijan has regained its military might, thus gaining the capabilities to free its land by force. Ilham Aliyev, the Azerbaijani president, who is under pressure from the public and especially from the affected Azerbaijanis, has called for a peaceful resolution of the conflict by asking the Armenian government to heed the language of the four U.N. resolutions. But he also has emphasized that Azerbaijani people will not keep their silence forever, and, if necessary, they will regain their territories by force from the Armenians, who are regarded as terrorists.

The Velvet Revolution protests last spring resulted in a change of Armenian leadership, with Nikol Pashinyan becoming interim prime minister and then on Dec. 8, his coalition won by a landslide in the elections. The government change has reinvigorated hopes for peace negotiations and in the Jan. 16 meeting with representatives from the OSCE Minsk Group, Azerbaijani Foreign Minister Elmar Mammadyarov and his Armenian counterpart Zohrab Mnatsakanyan, the parties agreed to prepare the populations for peaceful measures. However, this agreement is being interpreted differently in their respective countries. While the Azerbaijani side hopes to reclaim its internationally recognized territories and resettle internally displaced people and refugees in their country, the Armenian side insists its occupation remains legitimate and sees, therefore, the occupation as part of the peace deal.

The ºsNagorno-Karabakh conflict continues to shadow the foreign policy orientation of the involved countries, as well. Although Azerbaijan conducts a Western-oriented foreign policy and supports every regional project that serves the interests of the U.S. and the European Union in the region, it does not attract much reciprocal support. For instance, unlike in the conflicts in Georgia and Ukraine, the Nagorno-Karabakh conflict does not garner the same attention and support by the West. On the contrary, Armenia, in every regional and international arena of politics, has chosen to ally with Russia. The most recent example was in Armenia's decision to send military support to Syria on Russia's behalf. This is the most definitive example of the new Armenian government's foreign policy orientation.

The Western nations should pay attention to the Nagorno-Karabakh conflict if they are genuinely interested in integrating the South Caucasus region with the Western community. If Western governments show interest in the Nagorno-Karabakh conflict on the same level as with conflicts in Georgia and Ukraine, and if they choose to turn up the political pressure on Armenia, then the conflict stands a more solid chance of being resolved, according to international laws of sovereignty.

Furthermore, the U.S. could gain real friends, as Azerbaijan constitutes the market gateway to Central Asia, most notably, the Caspian energy reserves that bypass both Russia and Iran. Resolving the conflict will provide symmetrical benefits for all involved parties.

Currently, both affected countries earmark significant budgetary resources for defense and the military, which could be redirected toward economic development and investment. Moreover, Armenia has been isolated from regional projects that would strengthen its unstable economy and expand opportunities for relative improvements in prosperity for its people. Likewise, the region's exceptional natural beauty could bring about investment in tourism and other forms of environmentally conscious economic development.