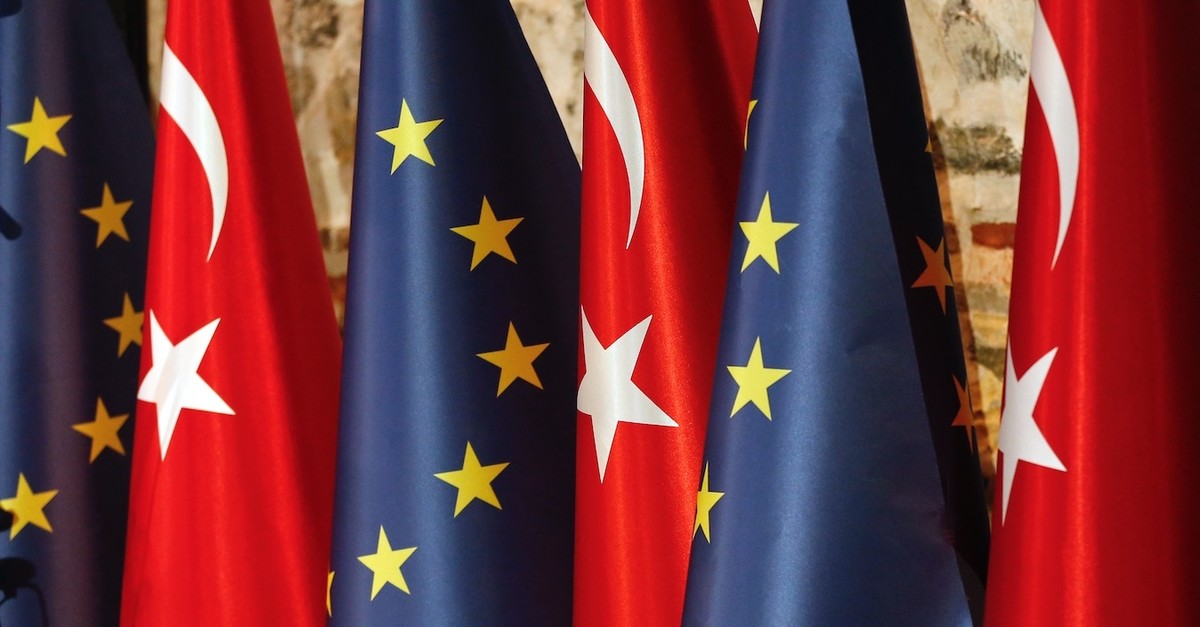 An official adjusts Turkish and European flags prior to the opening session of a high-level meeting between Turkey and the EU, Istanbul, Feb. 28, 2019.
by Sabbir Hasan Mar 05, 2019 12:02 am

Form the very beginning of the republic, Turkey structured itself in a way that was similar to European standards. By signing the 'Ankara Agreement' in 1963 as the first financial protocol with the EU, Turkey began its still-ongoing EU journey

In January 2019, the European Council welcomed their new presidency. As part of the tripartite leadership, known as the "Presidency Trios," Romania, Finland and Croatia will consecutively hold the presidency of the council for six months each until June 2020.

The valedictory presidency of the council led by Austria took a motto that goes: "A Europe that Protects." In 2018 the EU will prioritize the fight against illegal migration and keep their commitment other than some countries for example like Germany. Another priority is to expand the EU in the Western Balkans and southeast Europe.

When it comes to the case of Turkish accession to the EU, the last three countries in the presidency trios strongly avoided the issue. During the last rotating presidency the first presidency country, Estonia passed the issue on to the second country Bulgaria. A televised debate featuring German Chancellor Angela Merkel also led to Estonia's decision. In spite of being a close ally of Turkey, Bulgaria also didn't pursue the issue and surrendered to the EU's authoritarian nature. Finally, when the third presidency fell on Austria, the Austrian Chancellor Sebastian Kurz put the nail in the coffin by stating the "EU must stop Turkey accession talks immediately."

Europe: The protector of the protected

From Jan. 1, 2019 the new presidency of the council has taken charge and Romania is leading as the first rotating country. The Romanian presidency sets four basic issues as their priority. First, a united Europe; second, European safety and security; third, play a global acting role and fourth; centralization of common European values. With these priorities, Turkey is expecting Romania to fast-track the long-awaited EU accession process. But can Turkey rely on Romania or will history repeat itself?

Form the very beginning of the Turkish Republic, Turkey structured itself in a way that was similar to European standards. By signing the "Ankara Agreement" in 1963; as the first financial protocol with the EU, Turkey began its EU journey, which was formally submitted in 1959.

By signing that treaty Turkey and the EU entered a cooperation era, divided into three phases. First, a preparatory phase where Turkey was to strengthen its own economy by community support over a period of five years, the second phase; where a customs union was to be made with a 12-year time scale. When these three phases would be satisfactory The European Economic Community (EEC) would then consider Turkish accession. In 1970, Ankara signed an additional protocol for implementing the customs union.

After a critical time in Turkish internal politics, Turgut Özal was elected in the 1983 election and accelerated the accession process once again. By accomplishing all the necessary conditions, Turkey officially applied for EEC membership in 1987. Unfortunately, two years later the European Commission denied the Turkish application with some recommendations related to financial cooperation, customs union, technical and industrial cooperation and strong political and cultural relations.

Ankara successfully implemented the customs union decision in 1996. This act eliminated custom rules and regulations related to bilateral export and import and familiarized a new formation of trade relations. According to this agreement, bilateral relations returned in new formation in agricultural production, intellectual, and different properties. Thus it increased bilateral trade between the EU and Turkey. Unfortunately, in spite of completing the requirements of the European Council, intervention in Turkey's internal issues created trouble for the process.

When the candidacy began

While Turkey was giving importance to its own national security related to terrorist actions of the PKK, the European Council interfered in Turkey's security policies, they said the reason for this was because of Turkey's accession talks into the EU. At that time, Turkish Prime Minister Bülent Ecevit launched the necessary economic and political structural reforms to meet the essential requirements of the European Council. As a result, the Helsinki European Council accepted the reforms in 1999 and recognized Turkey as a candidate state like other candidate states.

After that four consecutive presidency trios have been gone by, but nothing has moved ahead. Eleven member countries respectively rotated the presidency position, but no one took the Turkish accession issue ahead. Surprisingly in December 2014, the European Union paved the way of accession negations.

The council stated that Turkey had met the Copenhagen Political Criteria. In order for accession as an EU member state, every candidate country should abide by some specific conditions predefined by the Copenhagen European Council in 1993 and which was again revised at the Madrid European Council in 1995. The major conditions were related to developing a democratic institutionalization; develop minority related rules and laws and a functioning bilateral market economy with the European Union to accept Turkey as a member of the European Union and an "Accession Partnership" was implemented by the Union. In the meantime, anti-Turkish propaganda began by different EU member states. During the EU parliamentary election in 2009, far-right parties campaigned against the membership of any Muslim country.

Being a developed country, they have portrayed a religious face of Turkey and showed strong opposition against Turkish accession to the European Union, which they say opposes European values. Also known as a strong country among member states, France and Germany also opposed Turkish accession in the European Union. It is stated that during election time a political decision maker created an anti-Turkish campaign to distract public attention from a bad domestic situation, like economic and institutional instability among EU member states as a result of the 2009 global economic crisis.

Meanwhile, in the third economic quarter, Turkey's decision to refuse IMF assistance was criticized by newspapers and the media including which included criticism of the Justice and Development Party (AK Party). In spite of the massive economic crisis, Turkey gradually saw development at the end of 2011. The growth rate reached 8 percent and unemployment was stabilized at 9.5 percent, the country attracted private investment at 25 percent and both the GDP and private consumption was raised by 13 percent. In addition, with 48 percent of votes in the 2011 elections, the AK Party gained a majority in Parliament. In a nutshell, the country was welcoming both economic growth and political stability at the same time.

In October 2011, the annual report on Turkey was issued by the European Commission which showed the total progress by Turkey toward EU accession. During this time, Turkey also took remarkable steps to reshuffle the Turkish administrative structure. Turkey introduced an Ombudsman's office, improved the criminal evaluation system and emphasized counterterrorism issues. Form an economic perspective, this report mentioned the Turkish economy was moving toward a "Soft Landing" economic structure.

Moreover, Turkey made developments required by the EU. In 2012, the European Commission published the "Enlargement Strategy and Main Challenges 2012-2013" report. The report covers the pros and cons of the EU enlargement process with the Western Balkans, Iceland and Turkey. According to the report, Turkish dynamic development in energy security, its geopolitical role and youth representation have put Turkey in an advanced position for accession as an EU member.

This report also stated that Turkey has shown active support and rearranged everything that the European Commission required in the new positive agenda announced in May 2012. For further proceedings, the council invited the commission for border dialogue between the EU and Turkey and also invited the taking necessary steps to be taken for visa liberalization as a gradual and long-term perspective.

But in 2012, a little crisis was seen when Cyprus led the presidency of the EU Council. Turkey boycotted the Cyprus presidency of the council of the EU in the second half of 2012. Turkey intended to put pressure on the Republic of Cyprus and the EU to show more willingness to reach an agreement in favor of Turkey.

Now, why I have introduced this long history? Because the new generation of readers should know the history of how Turkey has been long-sufferingly for accession as an EU member, but every time Turkey comes back to the table it is given new and silly causes. In the long run, it is too easier to understand that the European Union is still trying to find some other options to lengthen the process.

Though Turkey is expecting some advancement from the Romanian-led presidency, I am afraid either history will repeat itself, as it did during the Bulgarian presidency of the EU council. Turkey did not find the support it expected from Bulgaria, and it failed the expected acceleration of Turkish accession into the EU. However, the situation is not that pessimistic. Another EU official reported that Turkey should start the accession process once again and rearrange itself according to European principles.

But as a human being, let's live with hope once again that the European Union will consider a Turkish migration management system by which the EU countries don't face a refugee influx, where Turkey is suffering from refugee-related events. Even without European cooperation, Turkey is struggling alone with the refugee crisis. So, we hope the EU will not be happy to see a new wave of refugees with tomorrow's sunrise.