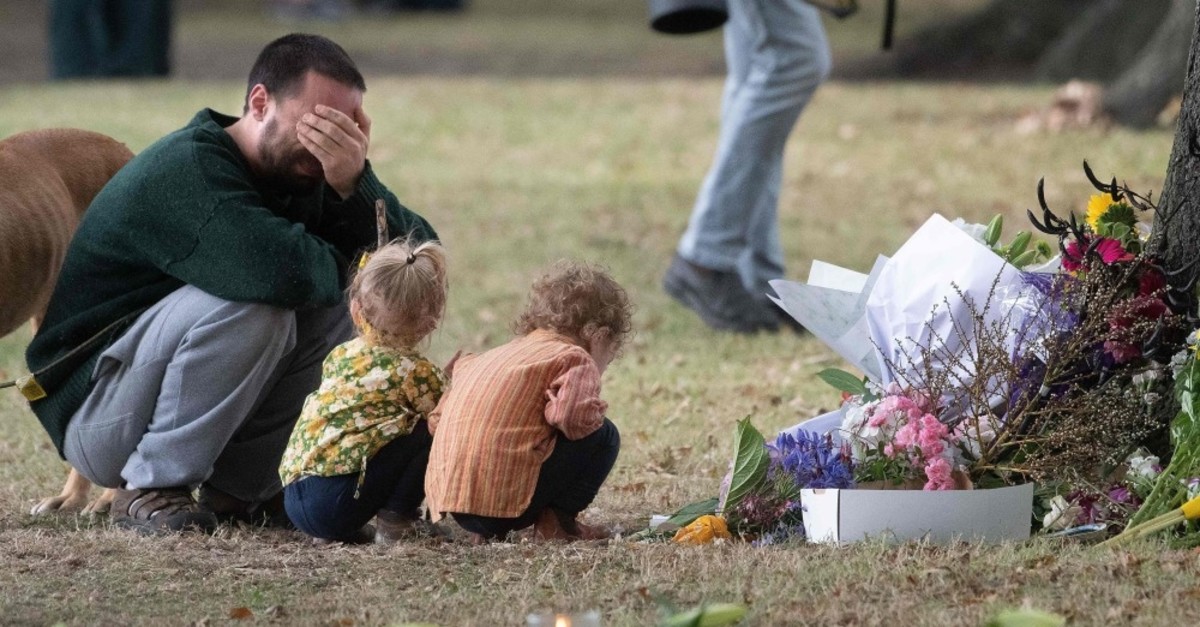 A man cries near his children in front of floral tributes for the victims of the twin mosque terror attacks across the road at the Masjid Al Noor mosque in Christchurch, New Zealand, March 19, 2019.
by Ahmed Al-Burai Mar 20, 2019 1:45 am

It was hours after a van hit pedestrians in Barcelona in 2017, when U.S. President Donald Trump unhesitatingly tweeted, "Study what General Pershing of the United States did to terrorists." Apparently, as the executive of the world's superpower, Trump's precious counsel was not to his inferiors or to the CIA or FBI agents; seemingly it was to "someone out there" seeking to combat terrorism. Trump's tweet also guarantees the efficiency of terrorism combating policy "There was no more Radical Islamic Terror for 35 years!"

Last Friday, 50 Muslims were deliberately and ruthlessly massacred at two mosques in New Zealand while peacefully waiting for Friday prayers. The 28-year-old terrorist, Brenton Harrison Tarrant, appeared in court on Saturday and was charged with the murders that he livestreamed. He was handcuffed and filmed making a WP or "White Power" hand gesture symbolizing white supremacists.

Whenever such attacks take place, a fuzz around terminology and religious background of the attacker prevails. Was he a Muslim? Yes, then he is a terrorist. No, then he is a suspect or an alleged killer. A striking example that went viral on social media was the coverage of the Daily Mirror. The British newspaper reserved most of its page for an innocent childhood photo of the terrorist killer with a headline "Angelic boy who grew into an evil far-right mass killer."

While the title for a similar attack on the Orlando nightclub in 2016 was "ISIS [Daesh] maniac kills 50 in gay club." What an unfortunate coincidence for the paper's impartiality and professionalism. Similar crime and similar death toll but the paper sees the former as an "angelic boy" and the latter as a "Daesh maniac." The Guardian and The Independent clearly described the crime as a terrorist attack. The Times and many other media outlets have no mention of terrorism in the title, and in the text attributes the description of terrorism to the politicians of New Zealand. No need to say if the attacker was a Muslim, such inconsistencies would be pointless. From the first moment of identifying the religious identity of the assailant, "terrorist," "radical Muslim" bombard the front pages and news headlines.

Is it a terrorist attack?

There is no doubt that it was a terrorist attack. By definition, "Terrorism is an action or threat designed to influence the government or intimidate the public. Its purpose is to advance a political, religious or ideological cause."

The cold-blood killer did not just livestream his assault on innocent worshipers, he also sent Prime Minister Jacinda Ardern his 74-page racist diatribe against what he calls "foreign invaders." Outrageously, he also threatened violence against Turkey, its citizens and its president. President Recep Tayyip Erdoğan's name appears under a section titled, "Kill High Profile Enemies." He branded President Erdoğan as "the leader of the largest Islamic group within Europe" and he should be targeted to remove Russia's "prime enemy" and weaken NATO. Shockingly, he called for the killing of German Chancellor Angela Merkel and London Mayor Sadiq Khan. It's all unequivocally based on the ideology of white supremacy, a radical ideology merging fascism, chauvinism, xenophobia and Islamophobia.

Thanks to the inspirers of white supremacists and Islamophobists. Pauline Hanson, an Australian senator, said on TV "I don't believe in the fundamentalist ideology of Islam. I don't believe in Islamic law. I didn't grow up with terrorism on the streets in this country." Scott Morrison, the Australian prime minister who said "I've got to call it out. It's radical, violent, and extremist Islam that opposes our way of life." Tony Abbott, the former Australian prime minister says "Western leaders describe Islam as a religion of peace; I wish more Muslim leaders would say that more often and mean it." Needless to say, that the American president said "Islam hates us." The speeches of those Islamophobic political bigots do matter and do widely echo among nationalists and white supremacists whose violent activities skyrocketed in the aftermath of such blunt empowerment. Undoubtedly, unwell and evil people such as the New Zealand mosque attacker will be inspired by those words to target the very people those politicians target in their hate-filled diatribes. Unsurprisingly, the terrorist killer himself cited Trump "as a symbol of renewed white identity and common purpose."

It's no longer a phobia!

The public speech of political figures and leaders forces us to challenge the use of the term, Islamophobia. By definition "Islamophobia is rooted in racism and is a type of racism that targets expressions of Muslimness or perceived Muslimness." But now, it's crystal clear that Islamophobes are not talking about Muslims, they're attacking Islam itself. It's no more a matter of semantic games. Now, it's not the far-right extremists intellectual and writers, it's world leaders and elected politicians who expose the unfortunate reality. They need not to be provided a platform to disseminate their implicitly toxic messages about the imminent existential threat of the emergence of extremist Muslims. They're now bluntly throwing it out. The enemy is Islam, not just a few Muslims.

A glimpse of hope

Muslims around the world don't have hope or rather don't look forward to seeing any gathering similar to the Paris march. Sixty world leaders congregated in Paris to share their support and solidarity with France after a week of terrorist bloodshed that left 17 dead. Muslims count on the feelings and sympathies of fellow humans. Humanity has been magnificently manifested through campaigns carried out by Christchurch residents who have paid tribute to victims of the mosque attacks with an outburst of interfaith solidarity including crowdfunding millions of dollars and donating halal food and even offering to accompany local Muslims now scared to walk the streets.

Emotional Haka dances were performed outside the Al Noor mosque. The solidarity went further to non-Muslim footballers performing sujood, the Islamic act of prostration to show their sympathy with Muslim families. A teenager dubbed "egg boy" online has been hailed a hero after he smashed an egg on the head of far-right Australian senator Fraser Anning, who blamed Muslim immigration for the mosque attacks. The message is clear, politicians have their interests and human beings have theirs.