The New Zealand massacre and anti-Muslim hatred in the Balkans 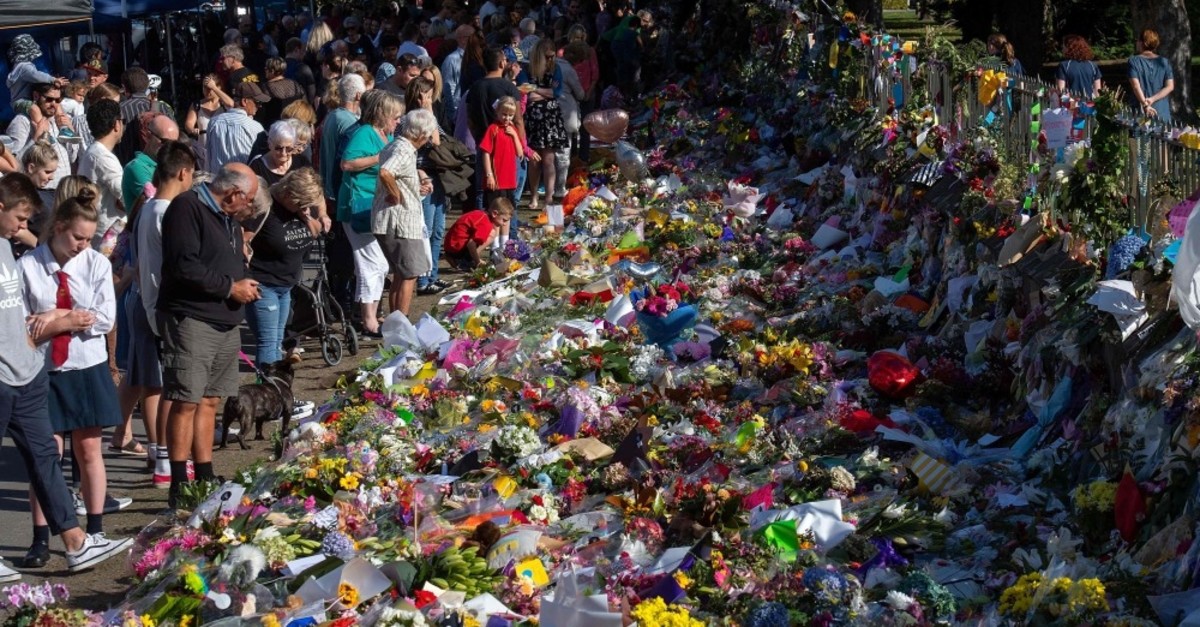 Floral tributes to those who were gunned down at the two mosques are seen against a wall bordering the Botanical Garden in Christchurch, New Zealand, March 19, 2019.
by Olsi Jazexhi Mar 20, 2019 12:00 am

The Australian terrorist Brenton Tarrant who staged the massacre of Muslim worshipers in New Zealand on March 15 was listening to a far-right Chetnik song praising Radovan Karadzic when he carried his attack against two mosques in Christchurch. The song that Tarrant was listening is "From Bihac to Petrovac village." The text of the song praises Serbian war criminal Radovan Karadzic who leads the Serbs to fight against the "Ustasha" and the "Turks." According to Serbian nationalist historiography the "Ustasha" is a derogatory term which is used to describe Croatian Catholics who supported Hitler during the Second World War, while the Muslims of Bosnia are described as "Turks."

The song which accompanied the terrorist in his massacre was played during the Bosnian War between 1992 and 1995 by Serbian soldiers to motivate them in their attacks against the Croats and Bosnian Muslims who were massacred and ethnically cleansed by the Serbs.

On the riffles which Brenton Tarrant used to butcher the Muslims he wrote the names of many Christian kings, battles and fighters who have fought Muslims in Europe. They range from Charles Martel who defeated the Moors in France, Bohemond I of Antioch who lead the crusaders of Pope Urban II to invade the "Holy Land," Dmitry Senyavin who fought against the Ottomans during the Russo-Turkish wars. He wrote even the names of a number of anti-Muslim battles like the Battle of Kagul 1770 (Russo-Turkish War), Battle of Bulair 1913 (Bulgarians against the Turks), Vienna 1683 (Austrians against the Ottomans) and Battle of Tours 731 (French against the Arabs). By trying to make a historical parallel between past European battles against Muslims and modern-day anti-Muslim terrorists Tarrant wrote the names of Alexandre Bissonette (Quebec mosque killer 2017) and Luca Traini (shooter of African immigrants in Macerata 2017) on his guns. By doing this he tried to show that people like himself, Bissonette and Traini are not terrorists but great defenders of Christianity and Europe.

The playing of a Serbian military song during the attack shows that Brenton Tarrant was deeply influenced by anti-Muslim Balkan Christian history. Tarrant wrote the names of Hungarian anti-Ottoman fighters like Horogszegi Szilágyi Mihály and Janos Hunyadi, Serbian and Montenegrin fighters like Stefan Lazarević, Novak Vujosevic, Tsar Lazar, Milos Obilic (killer of sultan Murad I) and even the names of anti-Muslim heroes of Albania like Scanderbeg and George Arianiti in his guns. By writing these names Tarrant wanted to show that he was killing the Muslims in the same way as Scanderbeg, Milos Obilic and Janos Hunyadi killed Ottoman Muslims centuries ago.

The hate which pushed Brenton Tarrant to carry the massacre against Muslims at mosques of Christchurch is not an isolated hate. It is an historical hate which nowadays is an official ideology in many countries in the Balkans. In Albania and Kosovo for example we have many politicians, journalists and nationalists who openly insult Muslims, Turks and the Ottomans and justify their hatred by invoking the history of Scanderbeg and Milos Obilic. Many Facebook pages like "Feja e Shqiptarit eshte Europa" or Catholic websites that describe the Muslims of Albania and Kosovo as "Turks," Anatolian parasites and reptiles who are a minority thanks to Scanderbeg who killed them. Thanks to the so-called War on Terror, Muslim communities in the Balkans are quite often insulted as Ottomans, Neo-Ottomans, Taliban, terrorists, Asian colonists and an "Asiatic infection." This hate often leads to violent attacks. In the past years we have seen Turkish consulates and flags torched in Kosovo and Kosovar and Albanian politicians insulting the Turks and Islam. On Dec. 31, 2017 in Mirdita, Albania a Turkish hydropower plant was attacked by a group of Catholic thugs who, like Brenton Tarrant, justified their attack in the name of Christianity and nationalism. Like Brenton Tarrant, the Mirditoris of the world want the Turks out of Mirdita.

In Serbia, scholars like Miroljub Jetvic make the same points as Brenton Tarrant made in his manifesto. Jetvic claims that NATO made a mistake to side with the Kosovan Muslims against the Serbs during the 1999 intervention in Yugoslavia. He accuses non-Muslims and Americans that by taking side with Muslim Albanians, "they are against the Christian Serbs, and by doing this they are proving that the god of Islam is the true god and the god of the Christians is false."

In Kosovo, journalists like Arbana Xharra praise the closing of mosques in Europe and have asked for the same in the Balkans. She and American authors like Alon Ben Meir and David Phillips attack Turkey for its policies in Bosnia and Herzegovina, Kosovo and Albania by claiming that Turkey has an Islamic agenda. If Brenton Tarrant entered mosques and killed 50 Muslim worshipers, Arbana Xharra from Kosovo has claimed in her Facebook page that if she has power she will "cleanse" the religious radicals in 72 hours.

Historiography in the Balkans

Much of the hatred that Serbs and Christian Albanians have against Muslims and Islam comes because of the way they read the past. National and Church historiographies in Kosovo, Albania, Serbia, et cetera, depict Muslims as invaders, barbarians and enemies of Europe and civilization. Skanderbeg who was one of the main Christian heroes of Brenton Tarrant during his massacre, is the major national hero of Albania. His war against the Ottomans and Muslims was officially celebrated by Albania and the Vatican in 2018. Albania and its Catholic Church celebrated the myth of Scanderbeg in all its state institutions and praised his war in defense of Europe and Christianity even though many Muslims were upset and protested the celebration of the 550th anniversary of Skanderbeg's death by claiming that the myth of Skanderbeg inspires hate, division and goes against the secular nature of the state.

While in the Anglo-American world the secularization of state has produced a neutral state and national identities, in the Balkans the hatred of Muslims and Islam is promoted on daily basis. The hatred against Muslims and Islam is promoted in schools and universities, in songs and books, on television and the internet. In this moment, when all the world is in grief about the massacre against the Muslim community of New Zealand, on many social forums in the Balkans some Christians fundamentalists think that Brenton Tarrant is a hero. In Albania, some Catholic fundamentalist are comparing Brenton Tarrant to Skanderbeg, the national hero of Albania. If the civilized world would like to not see a repeat of massacres of Muslims like we have witnessed in New Zealand, Quebec, London and so forth, we should start to properly address the process of the radicalization of Christians in Europe and in the larger world. The conflict in Bosnia and present religious tensions in the Balkans came because some people in our part of the world do not have a multicultural vision for the future. The hatred against Islam and the Turks which nowadays is openly demonstrated and promoted in the United States, Austria, the Balkans and elsewhere will produce more terrorists like Brenton Tarrant in the future.