Before the world surrenders to another terror cycle... 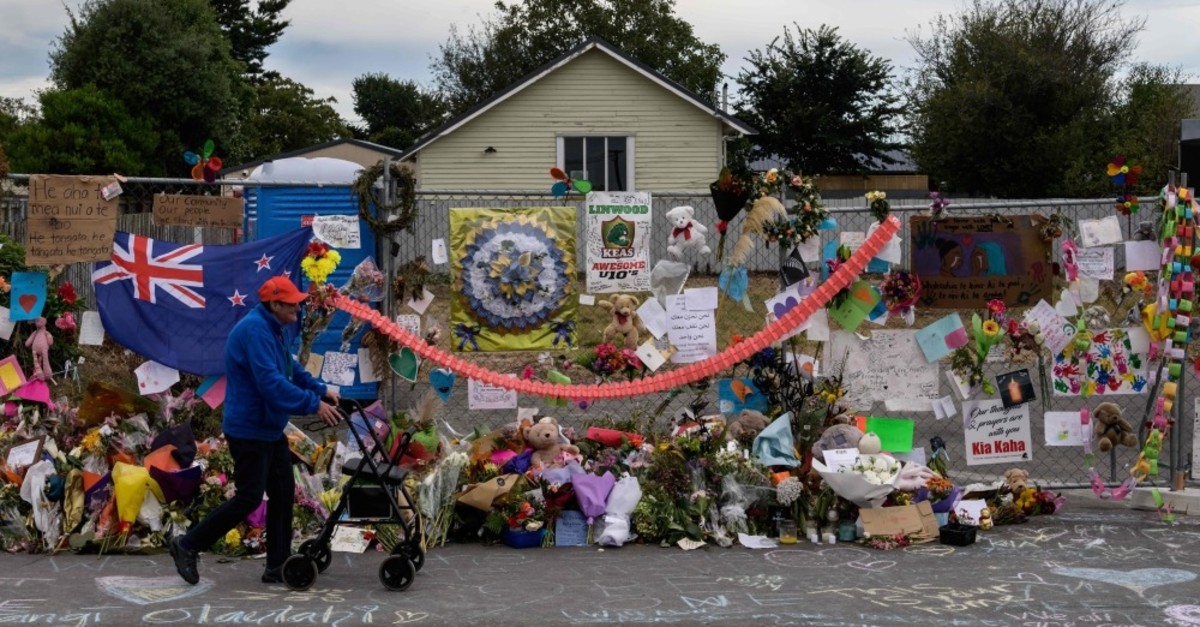 A man walks past flowers and tributes displayed in memory of the twin mosque massacre victims along the road outside the Linwood mosque (back C) in Christchurch, March 25, 2019.
by Markar Esayan Mar 27, 2019 12:06 am

On March 15, a massacre of Muslims during Friday prayer at two mosques in Christchurch, New Zealand shook up this peaceful country. Often ranking high on the list of the most livable places, the country watched that image crumble in the eyes both of its own citizens and the world. It's not an ordinary situation, as 50 innocent people were killed in a massacre that was livestreamed on social media by a perverted terrorist. By the way, it must be noted that none of the viewers filed a complaint until Facebook noticed the video and deleted the footage. You might know the double standard observed, particularly in Western media. A terrorist attack in Afghanistan that kills 100 people does not make as many headlines as an attack killing a Westerner in New York or in another part of the world. It's as if what determines the value of people and countries is not the Quran, the Bible, or Kantian ethics but exchange rates.

When it comes to the "others" of developed nations, however, things become a bit complicated. The U.S. is the strongest country on earth. But are an Afro-American and a White Anglo-Saxon Protestant (WASP) equal in terms of exercising the privileges of being an "American?"

It's possible to present more such indicators and examples that expose the inequality. The socio-economic injustice at the global scale is already recognized by all. What should be done for solution is also obvious. What's lacking is that the required political and social will does not and cannot emerge, remains weak, or is suppressed.

We are galloping toward one of the greatest global scrambles in a thousand years. "Alarmism" and "populism" are quickly replacing rationality and conscience everywhere around the world. The Western world is not ready for a multipolar world or for losing leadership. It's uncertain how the U.S. will choose to compete with China. What is certain reveals itself through trade wars and the U.S. Navy flexing its muscles in the South China Sea. That said, I do not mean that China will be "a better superpower," either. I am quite aware of the valuable aspects of the Western world, and European and American democracy.

But is not that just where the problem lies? What makes a state or society great and valuable? For example, would helping the PKK and its Syrian offshoot the People's Protection Units (YPG) gain statehood of sorts in northern Syria to the detriment of Turkey, a legitimate state and a NATO partner, make the U.S. great or diminish it? The U.S. is also threatening Ankara, which had to address its air defense vulnerability by purchasing the Russian S-400 missile system, of withholding the delivery of F-35 fighter jets. Washington refuses to sell its Patriot missiles to Ankara at a time when Turkey is struggling with terrorist groups, particularly the PKK and the Gülenist Terror Group (FETÖ), and copes with the fallout from Syria's civil war. Does that suit a great power?

As for Europe, it is trying to "punish" Turkey, one of its biggest trading partners that protects the southeastern border of Europe, with a warped logic issuing such unfair, rigid and irrational progress reports that seem to be prepared in Qandil (by the PKK), deemed by many as an effort to prevent the "resurgence of the Ottomans." Would this make Europe great?

For instance, during the Brexit campaign or elections in Germany, the Netherlands and Austria, even the center parties joined racists and right-wing radicals in hostility toward Turkey and Recep Tayyip Erdoğan and almost raced with them. Apart from the injustice done to Turkey and millions of Turks living in Europe, how does this affect the lives of "dark-headed" citizens and refugees? And how does the "Greater European Civilization Project" benefit from it?

Can it be that Europe, which has reduced everything to "utility" and converted the ideals and concepts of a democratic Europe into the instruments of that "utility," forget what prices it had paid in the past to reach the current point? Is it so easy to forget the 20th century and the causes and destruction of two world wars or the lessons learned from them, which seem to be taken lightly? Would holding an EU-Egypt summit in Egypt, where nine young men were executed shortly before, following an unjust trial and convictions based on confessions obtained under torture, make Europe great or diminish it?

As to the murder of Saudi journalist Jamal Khashoggi, we are ashamed of writing or talking about it now. Recently, Foreign Policy included Crown Prince Mohammed bin Salman in its list of the top "Global Thinkers of 2019." During this "democratic decline," the media is the most important indicator. And it does not bode well at all.

Returning to the Christchurch massacre, let's look at the Daily Mirror's headline which described the attacker as an "Angelic boy." The same paper referred to the assailant who killed 49 people in Orlando as "ISIS maniac." While it released a photo of the Christchurch attacker as a cute child in the arms of his father, it had used a photo of the Orlando attacker showing him as a narcissistic maniac ready for murder. On the other hand, the Daily Mail used the same photo of the attacker in the arms of his father, with the words: "His father died of cancer when he was young." The Courier Mail called the terrorist a "working-class madman." Surely, these are telling details. But they appeared in reports published immediately after the massacre. In other words, when the incident was very fresh and when we were worried about the victims.

In a piece he wrote for The Washington Post, President Erdoğan said, "The Christchurch massacre's alleged perpetrator attempted to legitimize his twisted views by distorting world history and the Christian faith. He sought to plant seeds of hate among fellow humans. As a leader who has repeatedly stressed that terrorism has no religion, language or race, I categorically reject any attempt to associate last week's terrorist attacks with the teachings, morals or maxims of Christianity. If anything, what happened in New Zealand was the toxic product of ignorance and hate."

For years, Turkey has been making very responsible calls on critical issues like anti-Semitism and Islamophobia. And it does not stop there. It expresses the need for a common definition of terrorism worldwide. But we know quite well that "civilized" countries are in touch with terrorist groups and, as in the case of the YPG, they spend huge sums to arm these groups. Certainly, it seems to be viewed as compatible with the interests of the U.S. But it is a dead end, an immoral path. Besides, it is destined to backfire.

What the world needs least is a new war between the Cross and the Crescent. It's clear that some desire it. But neither Christianity nor Islam argues for it. There will always be those who want to abuse religion just like anything. But has the world not gained enough experience to recognize such tricks?

It's possible to compete without colluding with terrorist organizations. We cannot endanger our civilization by normalizing such groups. If we insist on doing this, no place in the world will be safe. The massacre of 50 innocent people during prayer in the safest country of the world should have reminded us of this.