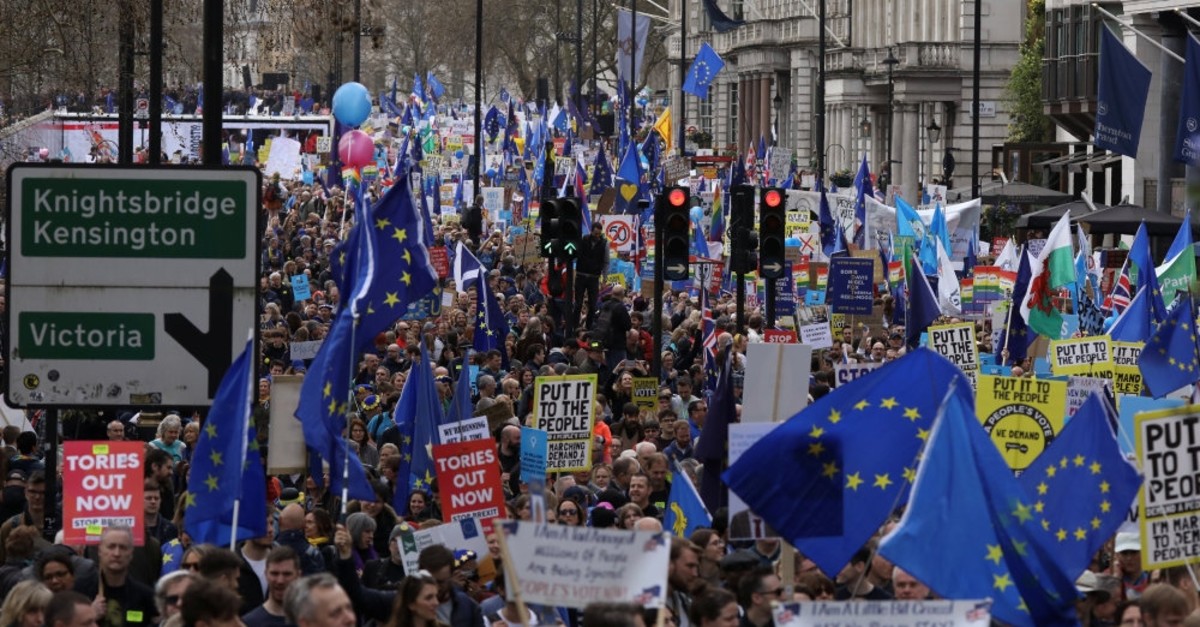 EU supporters, calling on the government to give Britons a vote on the final Brexit deal, participate in the ,People's Vote, march in central London, March 23, 2019.
by Esra Karataş Alpay Mar 27, 2019 12:06 am

Hundreds of thousands of protesters took to the streets on March 23 to protest the upcoming Brexit. London streets were thronged with hundreds of thousands of protesters who demanded a second referendum, in order to prevent the upcoming Brexit that seemingly looms in the near future. Most of the protesters held posters with pro-European Union slogans and flags, they wore the flag colors – yellow and blue – with some protesters having their faces painted in these colors as well. The "People's Vote" initiative organized the protest to attempt to prevent the already voted for Brexit from actually taking place. The numbers of protesters seem to have doubled in numbers when compared to the previous protest held in October, with more than 500,000 protesters showing up.

The crowds gathered early morning at Hyde Park and started marching through central streets and major squares such as Trafalgar Square and Oxford Circus as they continued onward toward Parliament Square. Many speeches were ongoing in central gathering spots where marchers used live social media forums to invite others to join the crowds on the street. The finishing point was where the Parliament government buildings stand and significant speeches were made. Various political figures partook in the march, such as London mayor Sadiq Khan, Scottish leader Nicola Sturgeon and the Labour Party's Vice President Tom Watson.

Sadiq Khan stated on his social media, "Today in London, thousands of people from across our city and country came together to send a clear message. Enough is enough. No more chaos, confusion and noise. It's time to give the British public the final say on Brexit."

The Brexit process seemingly has turned into a crisis as more than 4.5 million signatures of anti-Brexiters have gathered for the campaign on the Parliament's website.

In June 2016, the British voted in a national referendum for Brexit. The word Brexit literally meant that Britain would exit the European Union. A painstaking process began where Britain was to leave on March 29, 2019. The European Union initially came together after World War II, in order to ensure peace among member states. EU member states integrated economically, politically and socially in order to prevent any future conflict and citizens traveled back and forth without being controlled, as the EU had become akin to a whole country. However, decades of peaceful European Union idealism seems to have failed as British nationalists lobbied for a British sovereign state. Hence, Ireland will remain in the European Union as Northern Ireland will partake in Brexit. Therefore, the borders between Ireland and Northern Ireland will have to be raised again.

After the 2016 referendum took place and aggressive lobbying between London and Brussels, it still remained unclear and vague how and when England would leave the European Union. Last week Thursday, at the EU leaders' summit in Brussels, U.K. Prime Minister Theresa May appealed for the Brexit date to be postponed from March 29 to June 30, yet it was revoked. In the case where the English Parliament would accept the Brexit deal with the EU, the exit date would be May 22. However, if the agreement is not accepted, Brexit will take place on April 12.

When the referendum was held in June 2016, 52 percent of the votes were in favor of Brexit. On the other hand, 48 percent had voted for the United Kingdom to remain within the European Union.

Those opposing Brexit are currently demanding a second referendum which Prime Minister May remains resistant to, out of the fear that voters will become more polarized than they already are.

Today's protesters claim that the Parliament has locked up the process and that there is a political crisis going on. They demand the government's resignation, for being unable to handle the situation and thus to have a second chance with another referendum in order to prevent Brexit from happening.

The EU guaranteed Britain a conditional postponement, as new voting was expected. Yet it seems that May might not be able to proceed if she does not acquire the necessary support. The rise of nationalism and European Union skepticism has deeply divided the public and the future remains uncertain.