Turkey's image in Russia: Promotion is not enough 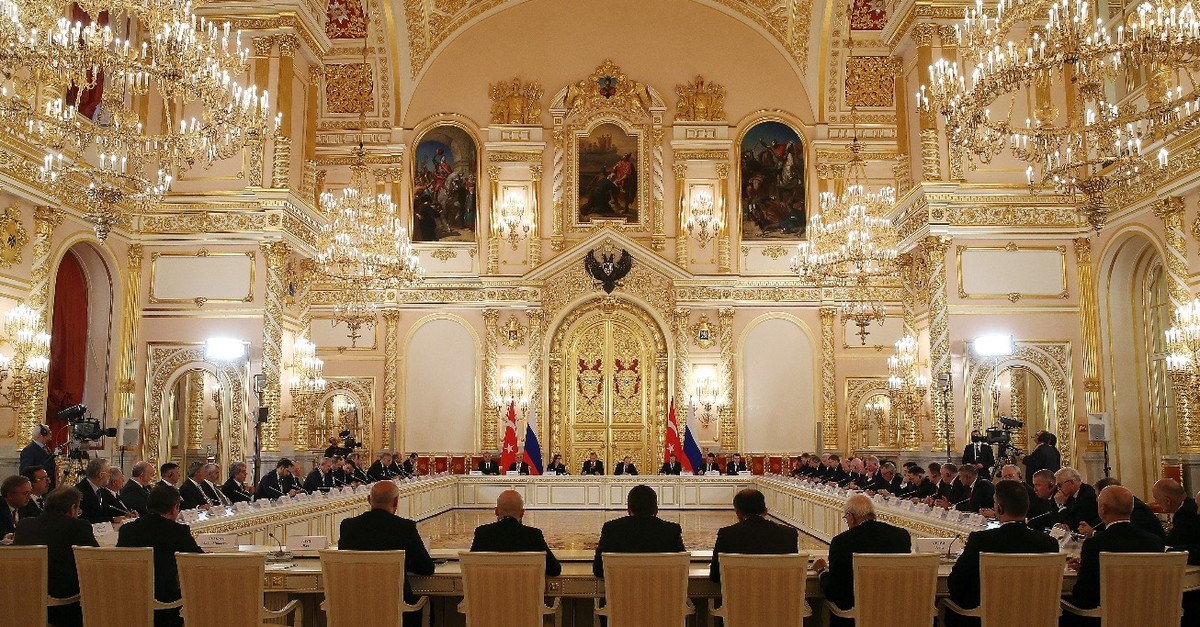 President Erdou011fan and his Russian counterpart President Putin attend a session of the Russian-Turkish Cooperation Council ahead of the inauguruation ceremony for the cross-cultural year, Moscow, Russia, April 8, 2019.
by Ivan Starodubtsev Apr 10, 2019 12:41 am

In February this year, the Association of Anatolian Media organized the International Congress of Culture, Tourism and Media in Hatay. As you can guess, considering the venue of the event, it was about the image of the province in the eyes of international and local media, as well as about the possibility of turning Hatay into a popular tourist destination.

I was invited to express the Russian point of view at the congress, which was attended by many important guests, including the Deputy Chairman of the Justice and Development Party (AK Party), Numan Kurtulmuş, and Hatay Governor Rahmi Doğan.

In preparation for my speech, I made an analysis of the image of Hatay in the eyes of Russian citizens, which, as a result, turned out to be far beyond the scope of a single province. The conversation about Hatay turned into questions of the image of Turkey in general in the eyes of Russians, the foundation of which the Turkish side laid over a quarter of a century ago, and the gaps that need to be filled.

After all, the leaders of the two countries repeatedly declare the task of building up trade and economic relations, rightly believing that their potential has not been fully revealed. And the disclosure of this potential highly depends on what the opposite side knows about you and in which areas it is ready to perceive you as a partner. Let's not underestimate the role of the image; from my own experience, everyone knows that, other things being equal, we will buy goods from a reputable seller in a store. Moreover, we are ready to overpay for a well-known brand, often in a remarkable way. In other words, saving on image loses customers.

What are the main Turkish brands today that are creating the image of Turkey in the eyes of Russians?

First, the country's tourism industry operates within the framework of an all-inclusive system. It created for Turkey a reputation that promises to provide the best ratio between price and quality, caring about the budget of consumers.

Many Russians arrive on their Turkish holidays on charter flights of nameless airlines. However, Turkish Airlines has already made a name for itself in Russia as one of the best airlines in the world for flights from Russia, not only to Turkey, but also to other countries; mostly, we are talking about Africa and the Middle East, for which Istanbul has become a convenient transit point for those traveling from Russia.

The second is active Turkish contractors in Russia beginning in the 1990s. As a citizen of Moscow, I would say that Turkish construction companies contributed a lot to the modern look of the Russian capital as well as many of the other cities in the central part of the country and even in Siberia. In 2014, President Vladimir Putin himself personally thanked Turkish contractors for the high quality of their work in the construction of Olympic facilities in Sochi.

Third, Turkish cinema and, in particular, Turkish series have seen widespread success in Russia. Despite copyright laws, many pirated sites continue to successfully avoid being blocked and hence function in Russia. One can find almost any Turkish series translated into Russian, just a few days after it is screened on Turkish television. This system works properly as a conveyor of how Turkey is understood, which directly testifies to the huge interest that exists in Turkish series in Russia and in Russian-speaking countries.

One of the most widely read articles on my website "Turkey is" are those around reviews on new Turkish films and ratings of popular Turkish series.

So, these are the fundamental factors on which the Turkish image in Russia is built. Let me repeat: The all-inclusive system in tourism, Turkish Airlines, building contractors, films and series. All this is competitive not only in Russia, but also on a global scale, and gives Turkey well-deserved reasons to be proud.

However, I would not have written all these facts, which may seem well known to you, if I didn't have anything to add. Everything looks good, doesn't it? I do not want to disappoint you, but, as always in such cases, there are nuances. Examples are the best way to illustrate them.

I regularly speak on Russian media about Turkey as a tourist destination, and I see quite often that in addition to the all-inclusive system, my audience often looks at me incredulously and sometimes even sports knowing smiles as if to say: What do we not already know about the premium all-inclusive vacations in Turkey?

The point is that Turkey has become a hostage of its image, which, on one hand, has brought it success, and on the other hand, does not allow it to move on. I am constantly telling my colleagues from the Turkish tourism industry that there is no need to invest any more money in the promotion of the all-inclusive system in Russia. Its Russian fans will come to Turkey anyway. But, instead, it is better to spend the same, and by the way, it is quite a lot, to tell Russians about the numerous alternative tourism opportunities in Turkey: Active, cultural, religious, gastronomic, medical and the thermal destinations and resorts. By continuing to advertise the all-inclusive system, Turkey only cements its old image and, moreover, encourages competition between its own hoteliers, forcing them to lower their prices, i.e. profits.

But you may ask if everything okay with Turkish contractors. In principle, yes, but even here there is room for criticism.

Normally, construction companies cooperate to defend their common interests only in extreme cases. For example, in Libya, all Turkish companies lost money and now they are fighting shoulder-to-shoulder to get it back. Naturally, money is not only divisive but can also be a powerful unifying factor.

However, when a couple of years ago I saw an unfair and unpleasant write-up about Turkish construction companies in a popular Russian newspaper, I could not find any union of contractors who would like to make a statement. Given that I offered my help in translating it into Russian and in delivering an open letter of the Turkish contractors to the table of the editor-in-chief of that newspaper, demanding publication and denial.

You know, I was very disappointed when I realized the negative publicity did not hurt anyone, and nobody wanted to spend time dealing with it.

Let's say the same more simply and clearly: In prosperous markets, including Russia, Turkish construction companies are competing and not creating a united front – until they all face losses. Is this position correct? For the immediate benefit of a separate company – yes. But, in a strategic sense, for the industry as a whole, for sure, no. However, Turkish contractors' unions in Russia still lack official offices.

Turkish cinema and Turkish series are very popular in Russia. This is understandable: Turkey ranks second in the world in the export of its series, of which quality is steadily increasing. However, these series mostly do not reach mainstream TV channels in Russia. They, of course, contribute to the formation of a positive image of Turkey in Russia and support high interest among Russians in Turkey. However, instead of generating revenue for producers, Turkey's series' production feeds a huge number of illegal websites, creating the internet traffic of millions and millions of views. Why does it happen in this way?

Above, I have only detailed the stories of Turkish success, but there are still many Turkish industries and possible areas of cooperation between Russia and Turkey that are either completely unknown in Russia or known only to a very limited circle of people.

Again, I want to back up my point with an example, when, as a head of the Russian-Turkish Project Development Association (TUR RUS), I also acted as a volunteer for the Turkish food industry. It occurred to me to tell the Russian public about the wide variety of Turkish cheeses and about real Turkish sweets – not only the ones they already knew about.

To do this, I simply, as a consumer, went to Ankara shops, where I bought my favorite cheeses and sweets. No one asked me to do this by the way. Then during prime time at Russia's largest radio channel Vesti FM, we did a two-hour program with a tasting of Turkish cheeses and sweets with an online broadcast on YouTube. For the program, I invited the main gastronomy specialists from the Federation of Restaurateurs and Hoteliers of Russia. There was a huge response from the Russian public. But, please guess, has it become interesting for someone in Turkey to further develop the success? Mainly, it turned out to be interesting for me; as a result, we launched a regular "Hour of Turkey" program on Vesti FM radio.

This is not the only example of this kind. On my website "Turkey is" I write a lot about unknown Turkey, about Turkish brands, collecting tens of thousands of sources. But, when I, for example, speak with representatives of Turkish brands about the need to promote them to Russian consumers, I often hear the question "Why? We are not going to open a store in Russia yet, and why to spend money on the promotion?"

Still much to do

Meanwhile, I found my argument very convincing. Last year, more than 6 million Russians visited Turkey and 100 percent of them shopped in Turkey, planning what and where to buy in advance based on information from the Russian internet. This is a good and solid market for Turkish producers. However, mostly what they do to attract Russian clients is to put the word "discount" ("cкидка") in Russian on their vitrines. They need to promote themselves, as the consumer literacy of Russians regarding Turkey is unsatisfactorily low. Mostly, Russians simply do not know that they can buy not only cheap clothes but also premium goods in Turkey. Thus, to buy expensive fashion they simply go to Europe. But in Turkey, they do not leave their all-inclusive hotels, and then we hear the complaints, claiming that only "cheap Russian tourists" come to Turkey. Maybe this is true, but who is the party at fault if the client is always right?

And I finished my speech at the meeting in Hatay with the following words: Turkey does a lot and has achieved a lot, but still, in an obvious way, it does not work on creating and promoting its image in Russia enough. It is possible to move ahead but new pages of cooperation cannot be opened, and no breakthroughs can be made within the existing image. In such a way, it is impossible to increase trade volume fourfold, as the presidents of the two countries declared.

In Russia, they don't get offended by the truth, but what about Turkey?