The dangers of growing Islamophobia 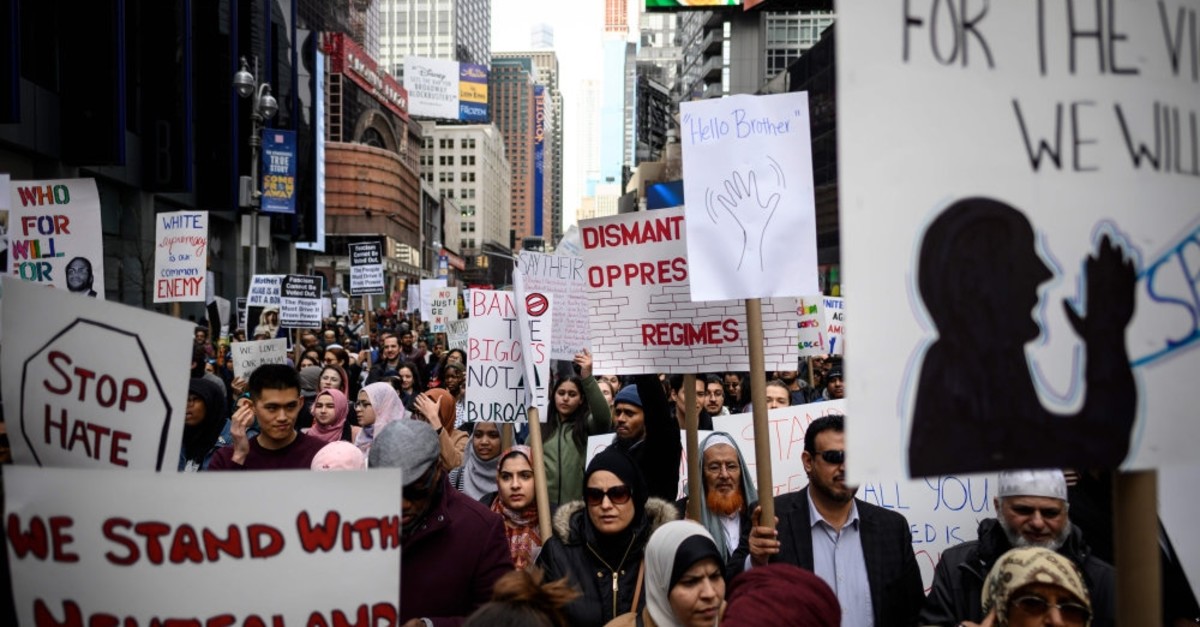 Demonstrators take part in a protest against growing Islamophobia, white supremacy and anti-immigrant bigotry following the attacks in Christchurch, in Time Square, New York City, March 24, 2019.
by Sami A. al-Arian Apr 12, 2019 12:12 am

Over the last two centuries, different political actors around the world –including the United States, China, Russia and the Zionist state – have used Islamophobia to expand or consolidate their political power. Indeed, the geopolitics of Islamophobia refer not only to its political-economic dimensions but also its functional use as part of various strategic imperatives and tools employed by regional and global powers to advance colonialist objectives, imperial expansion or narrow self-interest. It is therefore of vital importance to imbue in the public mind, particularly among the young generations, the notion that Islamophobia is not just about religious prejudices or social exclusion but more importantly, an essential feature of the global racial hierarchy that may be adapted in different contexts to assert hegemony or achieve superior power, control and wealth.

Even though Islamophobia, the irrational fear or hatred of Islam and Muslims, has existed for centuries, affecting the tense relationship between the Islamic world and the West, it has become increasingly more dangerous and lethal since the breakup of the Soviet Union as global powers started searching for a convenient enemy to advance their hegemonic designs. Moreover, in many societies around the world political parties, groups and movements were founded and have thrived by peddling anti-Muslim rhetoric and by using Islam and its adherents as scapegoats for nationalistic and political gains. With the rise of Trumpism as well as the far-right and alt-right groups in many countries, Islamophobic tendencies and anti-Muslim government-sanctioned policies have given rise to more deadly attacks as was witnessed in Quebec City, Canada in January 2017, and Christchurch, New Zealand in March 2019. In short, the rise of Islamophobia has risen to worrying levels affecting millions of Muslims and other communities around the world, such as the Sikhs, who could be mistaken as members of the Islamic faith. If not kept in check, such phenomena could spiral out of control, fracture societies and endanger world peace.

Last year, the first International Conference on Islamophobia, organized by the Center for Islam and Global Affairs (CIGA) at Istanbul Sabahattin Zaim University (IZU), featured some of the most notable scholars from Turkey and around the world. The conference explored the impact of Islamophobia on culture, society, politics and international relations. This year, during a three-day event starting Friday, the CIGA will convene the second annual conference and bring together 20 prominent speakers with outstanding knowledge on Islamophobia to examine its role in different contexts and analyze its discourse and geopolitics.

First, a panel on different epistemic notions of Islamophobia will critically examine various assumptions and arguments about the meaning and strategic objectives of the political utilization of Islamophobia, including how the "clash of civilizations" thesis that emerged over a quarter a century ago was the precursor to the current Islamophobic discourse for geopolitical power and control. The impact of Islamophobia on Islamic reform shall also be explored and discussed. In a second panel, scholars will discuss the intersection and divergence between Islamophobia and Orientalism, looking at different formations of the "other" over time, and thus raising the question of what differs between Islamophobia today and other forms of racial "othering," including the important examination of the similarities and differences between Islamophobia and anti-Semitism. Another panel will discuss the role Islamophobia plays in the service of empire building and expansion for political hegemony and economic control.

Given the importance of human rights in the international political system today, the relation between Islamophobia and human rights will be discussed, including the role of liberalism and feminism in its justification, as well as how racism has been normalized in the age of Islamophobia. How the current developments and future directions of human rights around the world might evolve will also be explored. Given the often-tilted focus of Islamophobia's consequences in the West, the conference will also have a panel that examines multiple manifestations of Islamophobia in different contexts around the world, including China and India. The important role played by think tanks and right-wing groups in propagating Islamophobia and demonizing Islam and its adherents for geopolitical ends will also be discussed. Finally, a panel that features all the conference's speakers will address strategies and policies that need to be adopted and pursued to curtail or reduce the harmful and detrimental effects of Islamophobia.

A major objective of the conference is to bring together leading scholars in their respective fields in order to intellectually engage in thoughtful discussions on some of the major issues related to Islamophobia and to ultimately explore the range of appropriate responses. The conference will commence on Friday afternoon with a distinguished panel that will feature professor Ann Norton from the University of Pennsylvania in the U.S, and author of the renowned book "On the Muslim Question," professor Salman Sayyid from the University of Leeds in the U.K., and professor Selim Argun, the vice president of Diyanet, the Turkish Directorate of Religious Affairs. The subsequent panels over the next two days will not only analyze important and relevant topics and present prescient assessments but will also attempt to present practical solutions to difficult challenges.