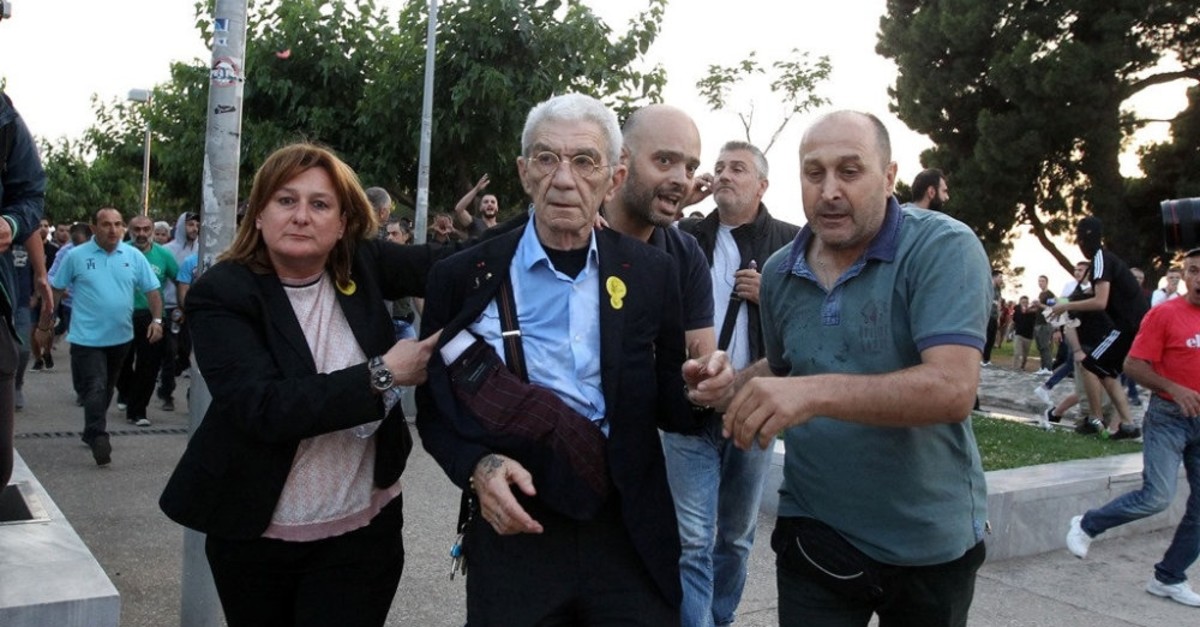 The Mayor of Thessaloniki, Yiannis Boutaris (C), is assisted after being attacked by a mob of far-right extremists during Remembrance Day in the city of Thessaloniki, northern Greece, May 19, 2018.
by Ferhat Küçük Apr 18, 2019 12:13 am

In May 2018, Thessaloniki Mayor Yiannis Butaris was attacked by ultranationalist Greeks during a flag-lowering ceremony in the commemoration of the so-called "Pontic genocide," – the alleged killing of ethnic Greeks by Turks in the Black Sea region during World War I and the subsequent Greek-Turkish War.

Butaris, 76, is known for his friendly approach toward Turks and his positive views on Turkey's founding president, Mustafa Kemal Atatürk.

In 1994, the Greek Parliament approved a bill to denounce May 19 as Pontic Greek Genocide Day. Ultranationalist groups were also angry with Butaris for his "smooth" approach to the Macedonian issue – a traditional name crisis between Greece and Macedonia. Despite growing protests and insults, Butaris participated in the ceremony but was immediately attacked by these very fanatics.

The reason why Butaris was targeted is because he proposed to name a Thessaloniki street, which has the house Atatürk was born in, Atatürk Street and build a Turkish monument in the city center. However, Butaris' opinions disturbed the right-wing movements; therefore, he was forced to take a step back. In addition, Butaris, in the first days of his term as mayor, had called the Turks "my brothers." This also led to a huge uproar in the right-wing media.

In this context, the Pontic issue, which was raised by Greek right-wing politicians and groups on political platforms, needs to be examined in detail, along with its relation to the Greek state and the Greeks.

At the end of the 19th Century, there once was a community of people working to spread Grecism (Yunancılık) extending from the Istanbul strait to the Black Sea region. The Greeks referred to the Black Sea as "Pontus" and subsequently, those who resided in that region were known as the "Pontus." In 301 B.C., the historic Pontus kingdom was founded by the son of the Persian Satrap's son Mithridates I.

In today's circumstances, the question is when the Greeks attempt to lay claim on the inheritance of the Pontus kingdom, does it actually have anything to do with Grecism? Essentially, the Pontus issue emerged as a result of the imperial edict of Gülhane for non-Muslim communities. In retrospect, when we look at the end of the 19th century, we find that the United Kingdom, Russia and the United States used Pontus activities, such as political, military, religious, cultural and ethnic provocation, as part of a project to establish a state on the shores of the eastern Black Sea region in parallel to the Greek strategy of the Megali idea.

Essentially, in the broader framework of history, the Pontus issue was used as an operation to put the Turkish Republic into a difficult situation and to provoke it – in the political sense. At the same time, the Greeks were used as tools to make this political scenario possible. The Greek historian Stefanos Yerasimos explains this situation in his book "The Pontus Issue," "as an unimportant issue of the great powers in their Middle Eastern politics." Yerasimos continues to argue for the insignificance of this issue by stating: "The Pontus documents were not categorized under a separate title. However, later on, documents regarding these issues have been filed under Turkey, the Caucuses and Greek dossier."

It is possible to date the Pontus issue to the Balkan wars. The Greek people of Pontus used the Balkan wars as an excuse to revolt against the state. When the state called for mobilization, there were Greeks who did not join the army and became the lead in forming bandit groups. These same bandits massacred Muslims in the region and pillaged their villages. After World War I ensued, the Greeks put more emphasis on their activities in Anatolia. During this time, behind the front lines, they conducted active espionage activities for the Russians and invited them into Samsun. In response to this invitation, the Russians provided them with weapons in large quantities, enough to fill Greek villages.

In the period that followed after the cease-fire, Greek warships and trade ships freely entered the region and armed the local people. In the same year of 1919, Greek army officers were specifically sent to train Greek gangsters in the region. Greece at the time was in close cooperation with the Istanbul Beyoğlu-based Pontus Central Society as it was sending delegations to create an environment of unrest and to induce an uprising.

Local Christian communities of the Black Sea region were revolting by brutally murdering Turkish people. Their spying and gangster activities led the Ottoman State to take precautionary measures against the Greeks. The first of these measures taken included Greek individuals in the region who spied and declared war against the Ottoman State to be transferred to "inland" to Anatolia.

As the national struggle for independence continued over the years, the Greeks continued their revolts. Due to treacherous acts by the Greek populations within the Ottoman State, the deportation law became a necessary means to curb the damage that was being done. Greek villages on the shores of the Black Sea were all directed to move into Anatolia as a strategy to contain the uprisings and halt spying and gangster activities from spreading.

The Western powers protested these measures taken by the Ottomans and started putting pressure on the state. Despite their efforts, the Ottoman State was able to quell the pressure that tried to break apart its lands. Afterward, the Treaty of Lausanne provided a political solution to the Greek rebellions by implementing an exchange policy to have the rebels emigrate to Greece.

The provocation of foreign powers encouraged the Greeks to form an independent state, and due to this inducement, Greek rebels went against Ottoman law and order. These riots resulted in material and moral losses, and considering the costs beyond this, the rebels also committed a war crime by cooperating with the enemies. The matter of concern for the Turks was to maintain inner security through measures implemented in the framework of law and order. From Turkey's perspective, the issue was resolved with the Treaty of Lausanne. However, the Greeks do not agree this issue has been solved and in order to divert from political instability and economic deficiency before the public, they tend to resort to such demagogy.

The crime of genocide

In fact, the genocide issue came to be recognized in the 20th century as a new type of crime that must be punished and prevented. In the framework of international law, genocide was deemed a category of crime due to its systematic and planned attempt to intentionally exterminate a community through acts of violence. According to many academic circles, ethnic and national identities were constructed as part of modern identity methods. There are many groups across the board that identify with a particular ethnic group and use this as a launching pad for conducting violence against other communities. At this point, the following question arises in one's mind: How does the concept of belonging to a particular group open the way to so many conflicts? In essence, when one takes a look at international media and academia around the world, ethnic-based conflicts are not as widespread as it may seem.

The common ground for conflicts, however, is the same starting point for violent activities. They begin after a long period of preparation that harbors ethnic/identity based on historical and ideological foundations that are later steered by military or political administrations. For genocide to be committed as a systematic crime, there need to be administrative personnel that instigate an ideological organization within the institution. The Rwanda case requires a close examination in this context.

When talking about genocide as the far extreme end of the spectrum of violence, one might ask if it is possible to look further into history in the previous centuries to find such a crime? In the legal framework, the term genocide entered the international law discourse only after the Nazi regime in Germany directed systematic violence against the Jewish community. From a legal angle, therefore, it seems neither suitable nor meaningful to identify mass violence activities prior to the initiation of the Convention on Genocide in 1951.

When we look at the point we have come to today, the Turkish Republic's legitimate and de jure Independence War led by Mustafa Kemal Atatürk on May 19, 1919, in Samsun is under threat by some who want to cast a shadow over this victory by engineering a so-called genocide – that might even seem absurd even to the Greeks. In international relations, this qualifies as a pursuit to imagine new enemies as a way to dissolve the perception of a weak and unstable state of Greece. But one should be assured that despite efforts to mar the image of Turkey with senseless and baseless claims, May 19, 1919, will always be remembered as the war that the Greeks and the Imperial states badly lost.