Will the new Ukrainian president make life in Ukraine funnier? 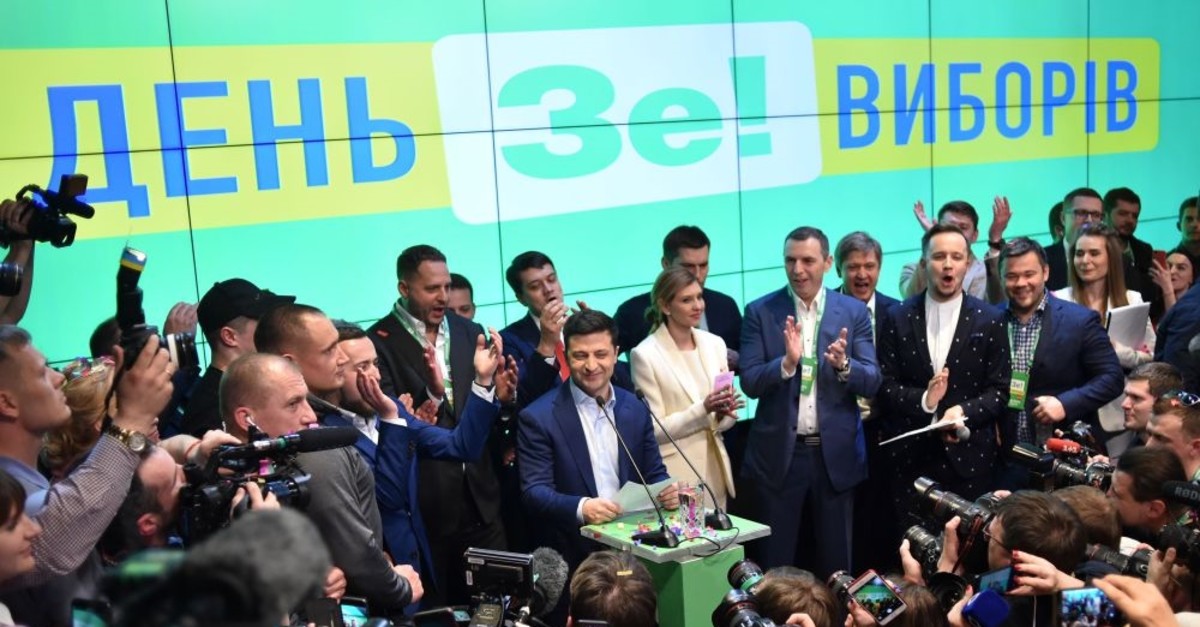 Ukrainian comedian and presidential candidate Volodymyr Zelensky gives a speech after the announcement of the first exit poll results in the second round of Ukraine's presidential election at his campaign headquarters in Kiev, April 21, 2019.
by Ivan Starodubtsev Apr 23, 2019 12:05 am

Russian-Ukrainian relations have undergone irreversible changes – at least for the foreseeable future. And Zelenskiy currently seems unable to do anything about it

Last Sunday, presidential elections were held in Ukraine, in which, predictably, the actor and showman Volodymyr Zelenskiy won. According to the preliminary results he scored around 75 percent of the votes, while his main competitor, the current president of the country, Petro Poroshenko, got just about 23 percent. Thus, Volodymyr Zelenskiy continued the trend observed now not only in Ukraine, but in many other countries of the world: Voters are tired of traditional elites, they want changes and they are ready to vote for new faces. Even if these faces are brand new to politics and don't have even minimal experience in public administration. In this sense, the main message of Volodymyr Zelenskiy to Petro Poroshenko is that he isn't an opponent to the old president, he is his "sentence." Thus, Ukrainian voters became jurors in a court and last Sunday delivered their "accusatory verdict" to the Ukrainian oligarch-president and the entire Ukrainian regime. Now, the main issue is what the coming into power of actor and comedian Volodymyr Zelenskiy means for Ukraine and for the whole region.

I am sure that few in Turkey know that the new president of Ukraine, in his role of a showman, first appeared and become famous in Russia. On the team of Krivoy Rog city, he participated in the championships of the Club of Cheerful and Quick-Witted (KVN, in the Russian abbreviation). This is a popular TV program of stand-up students in Russia. Admittedly, in this role, Zelenskiy was one of the most prominent characters on Russian television and even sometimes directly addressed President Vladimir Putin, who was a frequent guest of the Club.

On the eve of the Ukrainian elections, Russian television and the internet was full of clips from old KVN-programs. In particular, the show where Zelenskiy directly appeals to Putin sitting in the auditorium and asks "to take him for the gas debts of Ukraine to Russia." The series "The Servant of the People," released in Ukraine several months ago, earned enormous popularity not only in this country but also in Russia. In this series, Zelenskiy starred in the role of an ordinary school teacher. By the will of fate and one video recorded and downloaded on Youtube, this teacher became the Ukrainian president.

As we can see, some jokes, even quite phantasmagoric, in the 21st century, nevertheless tend to come true. New times, obviously, require new heroes.

Practically in the same role of an "ordinary man," Volodymyr Zelenskiy spoke at his so-called debate with Petro Poroshenko at the Olympic Stadium in Kiev on April 19.

Actually, the appearance of two presidential candidates on the same stage in order to gain the heart of voters is not heroism for public politicians. This should be a norm for every democratic country. But what everyone saw in Kiev on April 19 wasn't a debate. The two candidates bombarded each other with a pile of difficult questions and heavy accusations, which either hung in the air or found only one short answer, a categorical denial. The stadium atmosphere obviously did not have the thoughtful serious conversation that Ukrainian voters deserved.

The brightest moment of the debate was when Volodymyr Zelenskiy kneeled in front of the people at the stadium and thus put Petro Poroshenko and his stage supporters to their knees also. But unlike Zelenskiy, Poroshenko turned his back to the audience in order to face the Ukrainian flag. We must pay tribute to Zelenskiy: He drew his opponent into his territory of show business and looked more natural and brighter there. As a person, he was nicer than his opponent, and Ukrainian voters, obviously, wanted something like this: Not a politician soaring on geopolitical heights, but an ordinary "man of the people" on the list of presidential candidates.

But now, after his victory in the elections, Zelenskiy will have to leave the comfort zone and set foot on absolute alien territory, the territory of big politics. Acknowledging a great challenge in this situation, during the debate Zelenskiy expressed his readiness "to learn." But is it realistic?

The current President of the United States, Donald Trump, also a former showman, was heavily involved in large-scale international business, which always goes hand in hand with big politics. He came into power with his own vision of the American agenda, formulated in the slogan "Make America Great Again." Nevertheless even this didn't help him too much: The American system of checks and balances clearly started staggering after Trump became the president.

Unlike Donald Trump, the newly elected Zelenskiy has no business experience. He also does not have a clear agenda on major domestic and foreign policy issues, beyond the call to stop the war. To top it off, there is no system similar to the American one, which turned out to be capable of balancing even such an extravagant politician like Trump, in Ukraine. In addition, parliamentary elections will be held in Ukraine in October. In the few months remaining, even in a favorable scenario, it will be easy for the new president to look bad, but it will be very difficult to demonstrate his positive side. Moreover, these positive sides in Zelenskiy, as a politician, have yet to be discovered.

In terms of foreign policy, there are no expectations of breakthroughs for the new president in Russia, where the Ukrainian elections were closely monitored. Moreover, Russia has long ago made its decisions regarding the policy toward Ukraine. And these decisions are irrelevant to a person sitting in the Ukrainian presidential chair.

First, the return of Crimea to Russia, whose Ukrainian identity was a historical paradox, mistake and, moreover, a threat to Russian national security, will never and under no circumstances be a subject of discussion for the Russian side.

Thank God, Russia is the country that can afford to take the steps that it considers necessary, without looking around in search of external approval.

It would be better, of course, if Nikita Khrushchev, the general secretary of the Soviet Union Communist Party's Central Committee, hadn't cut Crimea from Russia and present it to Ukraine in 1954 as a symbol of the eternal brotherhood of the Russian and Ukrainian people.

It would be better, of course, that during the collapse of the USSR the divorce process between Russia and Ukraine was duly executed and the Crimean property returned to its legal owner.

It would be better if NATO, after the collapse of the USSR and the dissolution of the Warsaw Pact, would not accept the thoughtless and provocative expansion policy to the East and would not threaten to make the North Atlantic alliance's military base in the port of Sevastopol of the Crimean peninsula.

But history has no place for the conjunctive mood. Correcting these mistakes cost the relations dearly, not only between the leadership of Russia and Ukraine, but also, it seems, by relations between two truly fraternal peoples. I say this with great regret as a person who has both Russian and Ukrainian blood. There is a famous Russian expression: Behind someone's feat the others' crime always hides. If the crime wasn't committed, perhaps, the heroism would not be needed.

Second, in an economic sense, Russia has already secured its economic demarcation from Ukraine. The system of economic ties between Russia and Ukraine established under the USSR will finally cease to exist this year when the Turkish Stream gas pipeline is put into operation and Russian natural gas starts to flow directly to Turkey and to European markets via Turkish territory. As a result, numerous Russian-Ukrainian gas conflicts and interruptions in gas supplies to Europe will become a thing of the past. Although it is unlikely that the endless accusations against Russia by the West on the use of "energy weapons" will cease. The West really wants to see Russia as a country influencing nothing and having no leverage to defend its national interests in the world.

In Russian energy policy, Turkey has taken the Ukrainian place as a strategic partner. Herewith Russia is not too embarrassed by the fact that Turkey seeks to maintain a balance in its relations between Russia and Ukraine, and also does not recognize Crimea's return to the Russian Federation. Russia and Turkey are vivid examples of how to separate and ensure the autonomous existence of cooperation and disagreement areas. And this policy, based on the specific benefits for each party, has been much more productive than abstract discussions about the "brotherhood of two peoples" and about a "common historical path." So, there is no Russia-Turkey-Ukraine triangle, which many seek to draw on the map. There are simply the national interests of each country.

How can the new Ukrainian president change the above-described reality in relation to Russia and with Putin, whose names did not leave the mouths of the two candidates at the election debate in Kiev? After 2014, Russian-Ukrainian relations have undergone irreversible changes – at least for the foreseeable future. And Zelenskiy, speaking Russian then Ukrainian in public, is not able to do anything about it.

In the hymn of the Club of Cheerful and Quick-Witted, where Zelenskiy starred for many years, it says: "Let us not solve all the problems, but life will become happier for everyone, funnier for everyone."

If this slogan is still valid for the new Ukrainian president, then only for a half of it. Just as in the song, the existing problems are unlikely to be solved by him. But it doesn't look like happiness and fun are coming, even with the contribution of Zelenskiy, who can be rightfully called the most charming and witty president of Ukraine in the history of its independent existence.